In an industry as competitive as insurance, Maureen Ross O’Connell succinctly stated what must be the goal for every agency: “we want people to think of us when they think of insurance.” 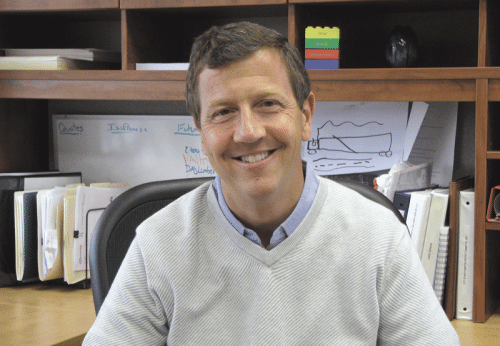 Bill Grinnell says social media is limited in how much business it can attract, but it’s still important to maintain an online presence.

But in an era when Americans, especially the younger crowd, aren’t reading as much print media as they used to — the striking decline of daily newspaper readership over the past two decades testifies to that trend — how do agencies reach out to potential new customers?

One answer is social media, from Facebook pages to LinkedIn listings to blog posts, said Ross O’Connell, president of Ross Insurance in Holyoke. But the messages and techniques used on these media are strikingly different than what might be considered traditional marketing.

“We don’t talk much about insurance on Facebook at all,” she said of the company’s lively Facebook page, which is updated virtually every day. In the weeks before this article went to press, Ross posted an article about a major airbag recall, but also one about how parents feel when their kids start driving and another about identify theft.

“People are not on social media to be sold to; they get annoyed when you try to sell to them on Facebook,” Ross O’Connell said. “We run contests, share relevant information, but we’re not trying to sell insurance on Facebook. They have an opportunity, if they’re so inclined, to request a quote off the Facebook page, but mostly, we just want to be part of the conversation.”

Meanwhile, Agawam-based Insurance Center of New England (ICNE) maintains its Facebook page with several posts per week. Recent topics range from auto safety and roadside emergencies to photos from the company’s recent Paint Craze Night to benefit the YWCA; from congratulations to clients that have won awards to an infographic about financial literacy in childhood. Meanwhile, several articles posted to the ICNE’s website delve into weightier insurance topics, from Affordable Care Act compliance to workers’ compensation.

“We definitely are embracing the tools — not to say we’ve mastered them,” said company President Bill Trudeau, noting that ICNE also engages with the region’s professional crowd through LinkedIn. “Our Facebook persona tends to be more community-oriented. We do put some things about insurance in there if it’s something of interest, like the windshield-wiper thing, using headlights when they’re in use. Or we might say something about fire-safety reminders. But it’s not filled with insurance stuff.”

The goal in posting any item on Facebook, he continued, is for people to read it and find it interesting — and hopefully keep coming back. Meanwhile, sharing news about local events and causes ICNE or its employees are involved in drives home their connection to the community. “We see it as a way to demonstrate what we’re all about, Trudeau said, “what we’re up to besides insurance.”

Bill Grinnell, president of Webber & Grinnell Insurance in Northampton, said his firm has focused increasingly on social media and online communications over the past two years, but the jury is out on what the agency gains from such activity.

“I am still unconvinced how we benefit,” he told BusinessWest. “We’re certainly doing it, but I don’t think it’s a silver bullet that will propel my business forward by any means.

“People just don’t go to insurance-company websites to hang out,” he added. “When we post something on Facebook, we want to make it interesting — but it’s not the most exciting business in the world. Obviously, we try to get people to follow us on social media, but that doesn’t replace old-fashioned ways of getting new business. Still, I do feel we are ahead of the pack in terms of our social media.”

Most effective, Grinnell said, is the company’s two online newsletters — the Guardian, geared to personal-line (home and auto) customers, and the Protector, which goes out to business clients, business prospects, underwriters, vendors, and other people the agency associates with. The contents of those newsletters then get posted to Facebook and LinkedIn.

“We do keep it somewhat relevant,” Grinnell said. “For example, in our personal-lines newsletter, we had an article over the winter with a lot of great information about ice dams — what causes them and how to prevent them. We also had a nice article on how your insurance company responds to water damage. We followed that up with what’s covered in flood coverage, seepage, and so on. That got good response from people.”

He’s currently drafting an article on how points affect auto-insurance premiums, and another on the pros and cons of different deductible levels and what kind of savings customers should expect. Meanwhile, the business-insurance newsletter recently featured a piece on workplace injuries and the impact they have on business income, business interruption, and insurance coverage.

“I went recently to an Employers Association meeting about employee engagement and got a couple of jewels from that on helping me run my business,” Grinnell went on. “Then I put an article in my newsletter; I took what I learned from it and shared it with my customers.”

Similarly, Ross O’Connell said the blog on her agency’s website — updated regularly by a full-time social-media architect, and featuring articles on everything from employee benefits to motorcycle safety to health-insurance plan options — is also geared to customers as well as prospects.

That architect, Krystal Carvalho, also writes for a second Ross blog, insurance-boss.com, which mixes hard information with lighter fare, like a piece on Easter desserts, and profiles of agency clients. But there is some crossover among the two blogs and the Facebook page.

“Everything changes in the social-media world,” Ross O’Connell said, “so much so that we’re shifting our philosophy and bringing our soft social stuff onto our website as well. So charity work, community events, that used to be all on insurance-boss.com, but the ultimate goal here is to drive people to our website. So our strategy is shifting a little bit now as we speak.”

To varying degrees, all the agencies that spoke with BusinessWest said social media can be a branding tool to keep a company’s name and community connections on people’s minds. Trudeau said this happens when ICNE posts a photo of a newly hired employee.

“We might stay more top of mind the next day,” he said. “And if someone asks them, ‘I don’t have a good agency; who do you use?’ hopefully they’ll think of us just a tiny bit more than if they had not seen anything.”

Social media has other practical uses, Grinnell added, noting that LinkedIn can be a solid recruiting tool. “We can communicate with all our LinkedIn friends about positions that are open and also look at individuals who might fit the job description. That has been useful to us.”

Trudeau said businesses that post regularly on social media have to strike a balance between being interesting and annoying; no one wants their feed clogged with material they have no use for.

Still, Ross O’Connell said, “it’s absolutely important to have a presence on social media — we have to be part of the conversation, branding ourselves.”

She added that the agency’s initial goal when starting to delve into social media was to reach out to the younger generation. “Of course, the average age on Facebook is now 55, but that was not the case when we started. We’re reaching a diverse audience.”

Trudeau also sees value in being part of the daily conversation on people’s news feeds.

“People have a lot of choices in the marketplace, where they can buy house and car insurance. If they see they can get competitive prices from someone who’s engaged in their community, we think people will choose to work with us as opposed to what we call a black box: ‘OK, time to get on the computer for a quote from State Farm, Geico, Progressive, or Allstate.’ You’re not going to run into those people at the local Red Cross board meeting; they don’t really have a specific presence in the Pioneer Valley.”

In short, the company’s pitch is that it represents many different carriers and can offer attractive products, he added. “But social media gets out the message that we’re engaged in the community, and here are some things we think are interesting and fun about us.”

Grinnell said there’s an element of client retention as well, and making sure customers are engaged with the agency and even expanding the relationship.

“It’s a very competitive world in the insurance business these days, and the insurance companies do most of the billing, most of the processing, so typically people don’t hear much from their agent unless they have reason to call them,” he told BusinessWest. “We felt it was important to get out in front of them and remind them who we are. We bring value to the table, and we try to bring value in that newsletters.”

As Ross O’Connell mentioned, however, the landscape is always shifting, so insurance agencies are constantly challenged to change with the times.

“We don’t always have all the time we need to do it,” Trudeau said. “It took a while to build those muscles, to have everyone remember, ‘hey, if you’re going to be at such-and-such event, get us some material.’

“We’re all students of social media,” he added, “and we’re doing what we can to do it better.”

How to Effectively Hire Top Candidates with Storytelling