Sal Scuderi discusses progress with the split-cycle engine at a recent investor meeting in Germany, where the Scuderi Group has an office.

Build a better mousetrap, Ralph Waldo Emerson quipped, and the world will beat a path to your door.

Had he lived today, Emerson might have a different perspective. Such as, build a better internal-combustion engine, and you might just change the world.

At least, thats what Salvatore Scuderi believes could happen if the potential of an innovative, fuel-efficient engine  first envisioned by his father earlier this decade  is fully realized. The long-awaited prototype of that engine is set to be assembled and tested in the coming weeks.

I think this could be very big, Scuderi told BusinessWest. I think it has the potential of being what we call disruptive technology. Were talking about a technology that could obsolete the electric hybrid and really change the face of major industries like automotive and trucking and things along those lines. There could be a fairly major impact.

The great promise of the Scuderi split-cycle engine, as its called, is that it could dramatically increase the efficiency of a machine  the internal-combustion engine  that has been notoriously resistant to such efforts in the more than 130 years since it was invented.

And it all began in the mind of Carmelo Scuderi, who developed the concept shortly before he died in 2002. His sons  Sal, Stephen, and Angelo  have spent the past several years honing the idea, raising millions of dollars in research funding, and preparing to market the final product. Among the first steps was building a prototype, and that work, conducted by Southwest Research Institute in San Antonio, Texas, is nearly complete.

The prototype will be done in December, Scuderi said. It will be fully assembled, and testing will begin, so we can have our first data in late January. You have to break the engine in before you can really start measuring, so by early February well have some solid data coming out of the research lab.

After that, who knows? One thing seems certain: if the Scuderi engine can actually reduce gas consumption and, by some estimates, double fuel efficiency, the path to the Scuderis door in West Springfield is going to get a whole lot wider.

With more than 1 billion engines currently in use worldwide and more than 140 million more produced each year  in everything from commuter vehicles and military equipment to power generators and lawnmowers  even small gains in efficiency could have huge impacts on the economy, dependency on foreign oil, and the environment, Scuderi said.

Yet, the very simplicity of the internal-combustion engine  featuring a piston moving up and down in a cylinder connected to a crankshaft  has long made improving performance almost impossible.

In fact, the first four-stroke piston engine was developed in 1876, and remains the primary design of engines today. And despite the myriad changes to automotive technology over the past century-plus, the efficiency of this engine design has remained largely unchanged. Specifically, it operates at about 33% efficiency, meaning that only one-third of the energy in each gallon of fuel is used to power the machine, and the rest is lost through friction and heat. Scuderi believes his familys engine will finally change that equation.

Heres why. The heart of the internal combustion engine is a piston connected to a crankshaft, moving up and down in a cylinder through the intake, compression, power, and exhaust strokes. In a typical four-stroke cycle engine, power is recovered from the combustion process in these four separate piston strokes within each single cylinder.

The gas passage includes a set of uniquely timed valves, which maintain a precharged pressure through all four strokes of the cycle. Shortly after the piston in the power cylinder reaches its top, dead-center position, the gas is quickly transferred to the power cylinder and fired (or combusted) to produce the power stroke.

By splitting the strokes of the cycle over a pair of dedicated compression and power cylinders, the design of each cylinder can be independently optimized to perform the separate tasks of compression and power, Scuderi explained. As a result, the split-cycle design provides more flexibility in how engines are built.

Not many people know about it, though, Scuderi said. Some local people support our company and know us well, and some of the big OEMs know about it, but the general public, for the most part, doesnt know about it yet. OEMs are original equipment manufacturers, or companies that use components made by another company in their own products.

Weve made some very good progress with a number of OEMs, most of the big players in the auto and trucking industries, he continued, and a number of them have signed non-disclosures and are planning trips to the research lab when the engine is up and running.

Beyond the basic engine concept, however, the Scuderi brothers have proposed an air-hybrid version of the Scuderi engine that, in theory, increases the energy efficiency of the split-cycle technology from 30% to 50%  an important consideration at a time when Americans are looking for ways to reduce gas consumption.

Instead of using an electric battery, the air hybrid stores unused energy in the form of compressed air. It also emits up to 80% fewer emissions than all the gasoline and diesel engines on the road today, Scuderi said.

Our air-hybrid concept has gotten us an awful lot of attention, he noted. The split arrangement makes it easy for us to recapture and reuse energy, but we do it with compressed air instead of batteries.

Bill Wrenn, director of marketing for the Scuderi Group, explained that a company could license the engine on its own, but by adding the air tank and a few controls, it could become a hybrid engine. A prototype of that design could be in the works later in 2009, along with a turbo-charged version of the split-cycle engine. Were taking a series of slow, conservative steps in doing this testing, he said.

For now, however, the Scuderi brothers are getting set to unveil the first split-cycle engine to the world, and wondering how that moment will impact their company  and the way the world uses gasoline.

Were pushing toward the prototype, and theres been a definite uptick in interest, Sal said. But we have a ways to go. 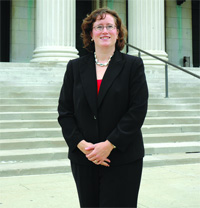