HCS Head Start Strives to Get Preschoolers on the Right Track 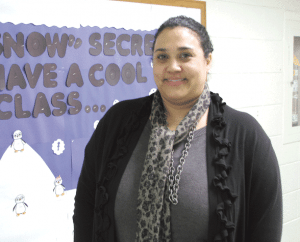 Nicole Blais says HCS Head Start has evolved over the years to reflect the current emphasis on preschool academic readiness.

Fifty years is a long time in any field. Soit’s no surprise, Nicole Blais said, that early-childhood education has evolved quite a bit since Head Start was launched in 1965.
“We consider ourselves a comprehensive early-education and care program that focuses, of course, on school readiness,” said Blais, director of community engagement for the Holyoke-Chicopee-Springfield Head Start program, which boasts 16 area centers and benefits mostly low-income families in 15 different Greater Springfield cities and towns.
“But when it first started in 1965,” she continued, “it was a summer program that focused on health and nutrition, with the idea that poor children who had access to healthcare and access to healthy foods would have a head start when they entered kindergarten, and be able to catch up to their peers who might have had other opportunities available to them.”
While health and nutrition remain key elements of Head Start, however, the program has increasingly focused over the decades on instilling the foundations of literacy and learning in preschoolers, so they can hit the ground running when they reach public school.
“The field of education has evolved; it had been more about the care of children, as opposed to education,” Blais said. “We’re so happy that early-childhood education is finally being recognized as a field beyond babysitting. We just don’t play ring around the rosy in these classrooms. There’s a lot of learning happening with this age group.”
While moving from a summer to full-year program after its early years, Head Start has evolved in other ways as well, she added. For instance, “people realized they couldn’t do anything sustainable with this age group without finding ways to include and engage parents, since the parents are with their children the majority of time through those first years.”
Today, she said, teachers team up with service coordinators, medical assistants who perform needed health screenings, mental-health professionals, nutritionists, and others, who constantly aim to engage parents in the total development — educational and otherwise — of their children. “We’re looking at the child as a whole.”

One Tree, Many Branches
Thirty-two Head Start programs blanket Massachusetts, Blais said, each with its own catchment area. HCS Head Start, as it’s known in shortened form, operates most of its centers in the three cities that comprise its name, although it also has sites in Ludlow and Palmer. Children from other area communities may access out-of-town centers, however.
“We don’t have centers with classrooms in all of our towns because our charge is really to set up shop in communities where there’s a great need,” she said, noting that poverty tends to be more prevalent in urban areas. “We work with vulnerable children and families — children who are living at or below federal poverty lines. And 10% of our enrollment has to be made up of children who have a special need or disability.”
Under the leadership of its long-time executive director, Janis Santos, HCS Head Start operates three different types of programs. There are 904 slots for traditional Head Start, designed for 3-, 4-, and 5-year-olds. Meanwhile, 60 clients are enrolled in Early Head Start, which works with prenatal families and children from birth to age 3, with goals ranging from healthy prenatal outcomes to the development of very young children to cultivating a healthy family structure. “Then, when a child turns 3, they can transition into the preschool room,” Blais said.
Finally, “about 10 or 12 years ago, we became the Migrant Head Start grantee for the state of Massachusetts, and we are charged with providing Early Head Start services to eligible children whose families are working in agriculture. Our assessments showed that a lot of migrant families reside in Western Mass. as opposed to the eastern part of the state,” she explained. “That program is a little different in terms of length of operation; those families tend to be here in the summer months, so we have a fast and furious 13-week program to cover those summer weeks.”
Last year, federal budget cuts resulted in a loss of 200 slots, making the program more competitive than it already was. Blais said HCS Head Start aims to fill spots by the greatest need first — not only financial, but developmental as well. And homeless families are always a priority.
With the public education system so focused in recent years on testing and outcomes, there has been increased scrutiny of Head Start. Competing studies have produced very mixed data in determining how much of an advantage enrollees gain when they reach kindergarten.
One notable 2011 study by the U.S. Department of Health and Human Services claimed that Head Start benefits both 3-year-olds and 4-year-olds in the cognitive, health, and parenting domains, and aids 3-year-olds in the social-emotional domain.
“However,” it goes on, “the benefits of access to Head Start at age four are largely absent by first grade for the program population as a whole. For 3-year-olds, there are few sustained benefits, although access to the program may lead to improved parent-child relationships through first grade, a potentially important finding for children’s longer-term development.”
Blais noted that each child is a different case, and some make academic gains faster than others.
“Every child is unique, especially during this critical time. They all come in here at different stages, and they all have their unique ways of mastering different skills,” she told BusinessWest. “It can be hard to keep that in perspective. There’s this standard, but it’s sometimes hard to capture that. Sometimes it’s hard for people to understand the complexities when we’re working with unique little ones.”
That said, HCS Head Start — which makes sure all its teachers have degrees in early childhood education and that each classroom has no more than 20 students — is always looking for ways to self-evaluate.
“We’re always figuring out how to appropriately measure something that gives validity to the program,” she said. “Teachers can tell you a thousand anecdotal stories about successes in the field. In general, we’re working really hard trying to figure out how to measure those.”

Getting Better
What is clear, Blais stressed, is that parent involvement in the program makes a big difference.
“There’s been a lot of talk over the years about quality, and what makes a quality early-education and care program: things like staff and materials,” she said. “The unique thing with Head Start, what has made it stand out, is the parent-engagement piece. The staff really get to know the families.”
They accomplish this through home visits, family fun nights, cultivation of classroom volunteers, and a policy council comprised of elected parents who serve as consultants to HCS Head Start’s senior management.
“We always make sure the parent’s voice is included,” she said. “Parents are made aware of how the Head Start program works — not only what they see in the classroom, but in its entirety. We’re developing leadership skills and advocacy skills for the family, too, so they can hopefully get a different perspective on how Head Start works and how important their voice is. Sometimes our families have been through some challenging times, challenging situations, and they don’t always believe they have the power to make a difference.”
Other Head Start programs are aimed directly at family involvement, from the TLC Building Healthy Relationships Program, which helps adults and teens develop skills in parenting, conflict resolution, financial management, and other areas; and the MILK (Men Involved in the Life of Kids) Program, a father-involvment initiative that offers male-focused activities that bring fathers and their children closer together.
While parents become more active, Blais noted, the teachers never stop learning, accessing a host of professional-development opportunities, particularly in rapidly advancing fields like science and technology.
“Professional development is huge in Head Start. We do a lot of in-service trainings,” she said, citing one recent workshop in conjunction with Holyoke Health Center on helping children develop healthy eating habits. “Teachers are on the front lines with kids, so we’re making sure they have a wealth of information, including community-resource information they can pass along to families. It makes a big difference for the child in the end.”
With so much at stake — and a waiting list to be admitted — it’s not surprising that regular participation is critical. Specifically, Blais said, children need to maintain an 85% attendance record to stay in the program.
“Not only will they miss out if they don’t show up,” she said, “but we’re really trying to instill good attendance habits for when children go off to kindergarten.”
Just one more way, in other words, to get a head start.