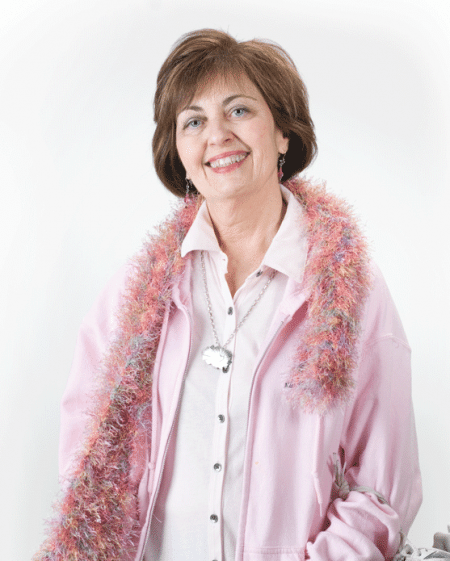 She found them in a bargain bin at T.J. Maxx in the summer of 2009, and knew at first sight that she had something special.

“I think I paid $2 for them; they’re pink, they’re sparkly, they’re different,” said Carvalho, who gave them their name because she thought that, by wearing them, she could help will the fund-raising walk known as Rays of Hope — which she founded after becoming a breast-cancer survivor in 1994 — over the $1 million mark for that year’s walk.

Thus far, the shades haven’t lived up to their name — the tallies for the past few walks have come tantalizing close to what is, for now, anyway, the magic number, but haven’t crossed that threshold. But Carvalho isn’t ready to give up on her latest good-luck charm.

“They’ll be back for a third year,” she said with a large dose of conviction, adding quickly that her choice of eyewear is just one of myriad decisions to make when it comes to her Rays of Hope ensemble (everything goes with pink sneakers, apparently). Indeed, over the years she has collected vast amounts of keepsakes and gifts from event organizers and fellow walkers — survivor pins and badges, scarves, T-shirts, and assorted chochkies, as she calls them. “I couldn’t wear it all,” she joked. “If I did, it would weigh me down so much I couldn’t walk.”

There are far more scientific ways of measuring just how far Rays of Hope has come in 17 years than Carvalho’s inventory of options when it comes to accessorizing for the annual walk — such as the total raised to date, more than $8 million. But there are perhaps none that are more poignant.

They show how the event has evolved into more than a fund-raiser — although it is that, first and foremost. It has become, said Carvalho, a very powerful show of strength, and unity, in a fight that’s far from over — a sobering fact that draws more individuals and teams to the starting line every year.

For creating and nurturing this show of unity, Carvalho, a former oncology nurse and currently director of case management for Jewish Geriatric Services, has been named one of BusinessWest’s Difference Makers for 2011. She said that, if she had her way, she would bring the tens of thousands of walkers and event organizers to the podium with her, because it is their collective efforts that have made the event, through the dollars it raises, a difference maker in the lives of breast-cancer victims, and a role player in the ongoing efforts to find a cure.

When asked how Rays of Hope came to be, Carvalho didn’t start with her own well-documented battle with breast cancer, which began when she discovered a lump during a self-exam. Instead, she focused on her nephew’s involvement, and also her own, in an AIDS walk in Boston several years earlier, and the very important lessons she took from it.

“I come from a family that gets involved,” she said while explaining how and why she became a participant. “And it’s from that walk that I gained a lot of the vision that I wanted to see happen here. That’s where I learned so much about how important it is, and how much you can do, if you can get a group of people who are dedicated to a cause and try to make a difference.

“They raised a lot of money, and they made it fun,” she continued. “They made it fun, exciting, and educational. While you were walking, you talked with people and learned about the disease; all that made it such a fulfilling experience that you wanted to do it again, and we did.”

To make a long and inspiring story short, Calvalho and other Rays of Hope organizers have managed to do the same with their event.

Indeed, with memories of that AIDS walk still fresh in her mind and an American Cancer Society breast-cancer walk that netted $400,000 in the pouring rain further inspiring her, Carvalho, while still recovering from her own lengthy battle with the disease, set out to create her own event.

She recruited organizers, secured a media sponsor (Channel 40), and gained commitments for startup funds. Still, many people involved with her wanted her to wait a year to get on even more solid ground. She listened to that advice, but pressed ahead with her plans for that year, and is glad she did.

Today, funds from Rays of Hope go in several directions. Some are put toward ongoing research, including work at the Pioneer Valley Life Sciences Institute in Springfield. Funds also go toward a wide range of services, including what are known as ‘complementary services’ for those battling the disease. These include yoga, Reiki, and something known as Art from the Heart.

Carvalho is traditionally assigned the task of reviewing requests in this complementary-services category, which she says has perhaps the most compelling direct impact on breast-cancer patients.

“It’s probably the most unscientific aspect of all this, but the piece that really helps people,” she explained. “It’s promoting wellness, and a way of helping people through the process.”

Over the years, Carvalho has turned over most all of the operational aspects of the walk to partner Baystate Health, employees there, and a massive team of volunteers. She describes the broad planning and execution process as a “well-oiled machine” with which she is still quite active.

She has what she considers a lifetime seat on the committee that receives and considers funding requests and ultimately rewards proceeds, and played a role in a five-year strategic plan for the walk undertaken in 2004. “Obviously, we’re overdue for another one.”

As for walk day itself, she said she has a badge (somewhat lost amid everything else she wears) that identifies her as the founder. “It gets me a parking space close to the start line,” she joked, adding that she is largely anonymous for the event itself, walking with a team from JGS and family members, and getting to meet as many new people as time and circumstances allow.

Carvalho told BusinessWest that fund-raising veterans have marveled at the longevity of Rays of Hope. “They say an event like this one usually runs its course in 10 years, and then you have to find something else. This one, though, shows no signs of slowing down; I don’t see it ending unless we find a cure for breast cancer.”

The one constant, she said, is change — in everything from the size and composition of the crowd of participants, to new wrinkles (a run and a walk in Greenfield were added for 2010), to the programs funded by the proceeds.

One thing that won’t change for 2011 is that pair of million-dollar sunglasses.

Carvalho isn’t sure what else she’ll be wearing — again, there are a lot of decisions to make — but weather permitting (and perhaps even if it doesn’t), the shades will return.

And Carvalho believes this year they will live up to their name.