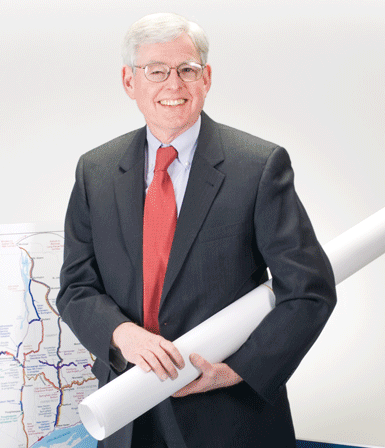 Tim Brennan was talking about the specific skills one must possess to be a successful planner, especially a long-range planner, which is his unofficial job title.

And he focused on two traits — patience and tenacity — noting that one must have them in abundance in this arena, because some — actually, it’s more like most — initiatives don’t take a few months or years to become reality; they take a few decades, at least.

“If you get disappointed easily, and you don’t have the grit to keep coming back over and over again and make the plans work that you think should work, then you’ve picked the wrong job,” he told BusinessWest, laughing as he did so. “And it happens; some people just don’t have that demeanor for this.”

As an example of patience and tenacity, he cited work to create bike paths in the region, an initiative that dates back to when he started working for what was then known as the Lower Pioneer Valley Regional Planning Commission (LPVRPC), as the transportation planner, in 1973.

“There were none at that time, but the temperature started to change and the federal government became interested in things other than autos and transit,” he explained. “We started working on what was then the Five College Bikeway, which was a conceptual idea. Once the media-release value was gone, everyone abandoned it; but we stayed with it, and 20-something years later, I’m at the ribbon-cutting for the trail. I’m not the planner in the Transportation Department, I’m the director, and I’ve got two young daughters who are going to be able to use the Norwottuck trail.

“That’s a long time to wait for some satisfaction,” he continued, putting extra emphasis on that word ‘long.’ “But now we have these bikeway projects springing up across the area, and I think they’re really attraction amenities; they add a lot of value to communities, and when we get them to hook up with one another, they’re great assets.”

There are several other examples from Brennan’s tenure with what is now simply the Pioneer Valley Planning Commission. They include everything from Connecticut River clean-up efforts to initiatives to bring more and better rail service to the area; from work to maximize the CSX complex in West Springfield as a regional economic-development asset to efforts to promote greater regionalization in this region and also neighboring Northern Conn.

For achieving progress in these areas and, overall, for giving that grit he described earlier, Brennan has been named one of BusinessWest’s Difference Makers for 2011. Some of the work he’s led is easy to see, such as those bike trails, a cleaner Connecticut River, and a reconstructed Coolidge Bridge. But some of it is outwardly less visible, yet equally important, such as the creation in 1994 of the Plan for Progress — a blueprint for helping the Valley remain competitive in an increasingly global economy — and its many updates since.

Brennan has seemingly always been a little ahead of his time, dating to when he did his thesis at UMass Amherst on issues concerning the collection and management of solid waste, and, specifically, the need for greater recycling. “That was kind of a radical idea at the time,” he said.

While at UMass, he took part in an internship with the city of Northampton, “which at that time was as downtrodden as any city you could imagine,” and worked on solid waste and, eventually, planning issues for then-Mayor Sean Dunphey. He was part of efforts to create a new master plan and revamped zoning laws, and was there to see the very beginnings of that city’s renaissance.

After graduating from UMass, Brennan commenced a search for employment in the region and found an opportunity at the LPVRPC as transportation planner. While in that position, he led the formation of the Pioneer Valley Transit Authority (PVTA), one of many regional transit systems created by the state Legislature.

In 1980, when the directorship of the LPVRPC came open, Brennan applied, but did not get the nod. But when the individual who was chosen ultimately decided not to relocate from Illinois, another search was commenced, and this time Brennan triumphed.

When asked what’s kept him in this job for more than 30 years, working for and alongside countless mayors, selectmen, and planning and development leaders, Brennan said it’s the diversity of the work and the satisfaction that comes with overcoming the many challenges it takes to bring projects that are decades in the making to fruition.

He also likes the balance between working in both the present and future tenses.
“I tell people, and I really believe this, that one of the interesting things about planners is that you have to be bipolar in terms of your time zone,” he explained. “And I don’t know if you can quantify it, but both switches are always on because, if you can’t demonstrate that you’re relevant to the present, all your conjecture about the future gets completely tuned out.”

So when asked what the Greater Springfield area might look like in 30 years, the man who always has one eye focused at least that far down the road said there will be some recognizable changes.

“What’s going to shape the region is energy and climate change,” Brennan said. “Suddenly, it’s politically unpopular to talk about climate change, but the scientists are screaming that it’s real and we have to do something about it. A few weeks ago, the state set greenhouse-gas emission-reduction goals for 2020 and 2050. I don’t think I’ll be around in 2050, but it’s my job to start, with my colleagues, to take this seriously and try to get us ready.

“So what I see is that we won’t be on fossil fuels anymore; we’ll be running off different kinds of fuels, and we’ll need a more-compact land-use pattern — we can’t keep spreading out like we have been,” he continued. “We’ll be going back to the future in a way, where some of the places that we depopulated get repopulated, including many of the urban areas, the downtowns.”

Meanwhile, the Valley will have to focus its energies on successfully existing in one of what are projected to be a dozen or so ‘super regions,’ the one in question stretching from Philadelphia to Boston.

“We have to be connected to the Northeast mega-region, or we’re toast,” Brennan told BusinessWest. “There was a guy here 10 years ago who has a national reputation, who said that if we didn’t have firm plans and follow through on them, much of New England, including this region, could end up as a cul-de-sac, and that really stuck in my mind.

Getting to that place won’t be easy, but Brennan has the requisite personality traits — patience, tenacity, and that all-important grit — to get the job done.