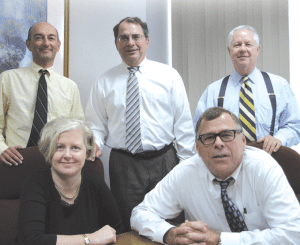 “Things change much too quickly in this business for that,” he explained, referencing all that’s happened over the past half-decade to get his point across. But this doesn’t mean that firms can’t undertake strategic planning, he stressed repeatedly.

At Springfield-based Annino Draper & Moore, or ADM, as it’s called, the firm he started with Mark Draper and Louis Moore (former colleagues at the firm Ryan & White) in 1990, planning is a year-round assignment usually focused on the shorter term, said Annino. And often, track is laid at a year-end meeting of the minds, or planning session, in the firm’s conference room.

At the most recent one, last December, the partners decided to move ahead with everything from a larger and more visible satellite office in Westfield (it has another, similar facility in Northampton) to more extensive marketing, including a revamped and expanded Web site and an electronic newsletter, to a hard push into the realm of alternative dispute resolution, or ADR.

“We’ve jumped with two feet into the arbitration and mediation aspects of alternative dispute resolution,” said Annino, the firm’s managing partner, adding that the creation of the ADR Group was an aggressive step taken in response to ongoing trends toward greater use of ADR and thus less work in the courts, and the recognized need to fill voids in business in such areas as estate planning, family law, and others.

Draper is a certified arbitrator who has handled a number of cases, and others at the firm have taken mediation training, Annino noted, adding that ADR services could become a strong growth area for the firm moving forward, especially if marketed aggressively, which ADM intends to do.

“With the reputation that this firm has in the marketplace now, once we let people know that we’re in the mediation and arbitration business, this will be a good source of business for us,” he explained, adding that, with ADM’s expertise across many areas of the law, it could mediate or arbitrate a wide range of matters.

The past several months have been spent putting the ADR Group and other strategic initiatives into effect, said Annino, adding that these steps, coupled with the firm’s wide diversity of specialties — covering everything from construction law to estate planning; environmental law to general business law — has Annino Draper & Moore positioned for continued growth.

For this issue and its focus on business law, BusinessWest turns the spotlight on a two-decade-old firm that is shedding its comparatively low profile and taking intriguing steps in response to changes in the legal profession, as well as the local business community.

Tracing the history of the firm, Annino said it is one of several that were essentially spun off from Ryan White, which at one time had more than two dozen lawyers and was one of the largest firms in the area.

Lawyers in that firm were “compartmentalized” into certain practice groups, he continued, adding that, with their backgrounds in diverse areas, the three individuals with the names now over the door decided there was proper chemistry and synergy for a partnership.

The firm had a solid foundation in the form of clients that stayed with the three partners after they left Ryan & White, and continuously built on that foundation over the years.

“We’ve been able to grow because many of the clients who came with us when we left Ryan & White are still with us,” he continued. “We have very loyal clients, and, frankly, we do a great job for them. We do excellent work, and we’re responsive; that’s what a small firm has to do in order to compete.”

Trant Campbell, who specializes in everything from family law to dispute resolution, joined the firm in 2007, and the latest addition is Tracie Kester, Annino’s one-time assistant and paralegal, who earned her J.D. at Western New England Law School, became an associate at the firm soon thereafter, and was named partner earlier this year.

From the beginning, the firm’s success has been attributed to its diversity and ability to provide a wide range of services to specific clients.

“The work I do in residential and commercial real estate works out well with Mark’s construction practice and Lou’s environmental practice,” said Kester, offering just one example of the synergies within the company and how the various specialties complement one another and improve the overall quality of service. “Any time I have a hint of an environmental problem with one of my real-estate deals, I go down to hall — I don’t pass ‘Go,’ don’t collect $200, and go straight to Lou’s office.”

There is similar synergy between estate-planning work and real estate, noted Campbell, adding that ADM can handle a full range of client needs, and often without having to go outside the firm for an expert.

“Clients’ legal needs don’t necessarily fall in one area,” he explained. “If there was an estate administration going on, there may be a piece of real estate involved, and there may be some environmental issues and some title issues. What I found when I came here was a willingness and a desire on the part of the other members of the firm to help us reach a solution; it’s a great level of comfort.”

Moore agreed. “We don’t do everything that the large firms do,” he said, “but the things we do, we do well and more cost-effectively than most other firms.

“It’s not unusual, especially in some more complex matters, when you’re dealing with a larger firm on the other side, to see them have two or three lawyers in a meeting or at a hearing,” he continued. “And maybe not in every instance, but many of them, clients are getting billed for that.”

The firm’s diversity and cost-effective service have served the company well during the recent — and in many ways still ongoing — economic downturn, he continued, adding that the firm, like most all others, struggled during the leanest of times, especially in hard-hit fields like construction, where most activity came to a grinding halt, but persevered without cutbacks or salary cuts because of its broad range of specialties.

Looking ahead, Annino said the business community, and society in general, are moving increasingly in the direction of ADR, and the firm is responding accordingly — and proactively — with its new ADR Group.

He noted that in addition to divorce and other areas where ADR has been used effectively for many years, there is vast potential for the firm to gain business in such areas as environmental law, construction law, and family law.

“When people find out that we’re doing environmental, family, and contract mediation and arbitration — and we really haven’t told them yet, but we’re starting to — I think we’re going to be very busy,” he said. “I see the family-mediation piece as one where there is growth potential — I’m not aware of it being done extensively now.

“You look at a case where the parents die and now there’s an issue with the estate,” he continued, offering an example of the type of work he anticipates. “You’ve got four children, and everyone is going to get a lawyer. If you’re well-thought-of as being able to mediate or arbitrate those types of issues, rather than fighting them out in the courtroom, that would seem like the perfect venue to resolve family disputes — privately, quietly, and less expensively.”

When asked how a firm, or a specific individual, gains a solid reputation in the realm of ADR, Draper said it does so by becoming known for both expertise and fairness, which can only be attained through time, experience, and thoughtful resolutions.

“The first thing you need to do is get the word out, which we’re trying to do,” he told BusinessWest, noting the use of the firm’s Web site and other vehicles to introduce the service. “Beyond that, it’s just like any aspect of a legal practice — if the parties in the mediation or arbitration perceive you to be fair, then I think you’ll get a good recommendation from the parties and the attorneys. On the other hand, if you’re perceived as being unfair or biased toward one party or the other, you’re not going to get a good recommendation from either side.

“If I see someone who has a bias as an arbitrator, I’m disinclined to use that person,” he continued, “because I’m not sure where the bias is going to fall next time. So it’s just like building any other kind of practice.”

While working to build its portfolio in ADR, the firm is making strides with many of the other strategic initiatives identified last December.

For example, the firm has relocated into larger quarters on Broad Street in Westfield, providing improved visibility. Annino and Kester (both Westfield residents) spend at least one day in a week in that city, which has recorded significant residential and business expansion in recent years and offers strong growth opportunities.

Meanwhile, the firm is moving ahead with plans to market itself more aggressively and become much more visible than it has been in the past.

Specific steps include the revamped Web site, which will, in addition to offering information about the firm, its lawyers, and their areas of expertise, provide visitors with information on timely issues of the day, as well as a new e-newsletter sent to hundreds of clients and prospective clients.

The first edition, which came out in June, chronicles the Westfield relocation, announces Kester’s new status as partner, introduces the new ADR services, and even offers a bit of commentary on the economy.

“We have definitely noticed an uptick in business and consumer confidence and a resulting demand for legal services,” it reads. “There is also new optimism in our clients. Much of our new work results from clients expanding business operations or taking advantage of new business opportunities. It is exciting to be part of this emerging vitality, and to see long-time clients optimistic again about the future for their families and businesses.”

Whether this perceived uptick and rise in optimism translates into new growth opportunities for ADM remains to be seen. But it’s clear that the firm is taking solid steps to effectively position itself within a changing economic and legal landscape.

As Annino noted, five-year plans don’t generally work out in the legal industry. But firms still need to look down the road and anticipate where opportunities will be found and take proactive steps to capitalize on them.

And ADM has a firm resolve — both literally and figuratively — to do just that.