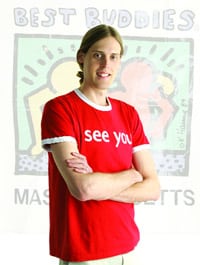 A lot of people spend their 20s killing time. Matthew Andrews didn’t want to waste any. And considering the arc of Andrews’ travels the past few years — volunteering at a South American orphanage, helping people in a remote village in India learn practical trades, working at a soup kitchen in Baltimore, and hiking from Georgia to Connecticut, to list a few — ‘time well spent’ seems like an understatement. “I spent my high-school years goofing off. But I turned 21 the day I got to India, and that was the end of it; I was ready to do something else,” said Andrews, whose latest adventure is serving as program supervisor of Best Buddies of Western Mass. That’s the local arm of an international organization that matches individuals suffering intellectual disabilities with adult friends, enhancing their access to community ties and employment. After his long walk (he had previously hiked the Appalachian Trail), “my feet gave out on me, so I took a break,” he said, during which time he worked as a carpenter’s apprentice and, significantly, befriended a supporter of Best Buddies. When she secured funding to open a Western Mass. office, she offered Andrews a job. Today, his expansive role includes fund-raising and finances, event planning, public-awareness efforts, and supervision of the friendship programs, which currently serve more than 600 clients throughout the region. “The range of activities here is so diverse,” he said. “I never know what’s going to happen next, and I never get bored.” To Andrews, the work isn’t far removed from the community-building efforts he has taken on stateside and overseas for much of the past decade. “Best Buddies is all about empowerment. A lot of organizations raise money through special events with no connection to the organization’s mission,” he said, explaining that his agency’s clients are consistently involved in such efforts. For example, a benefit concert in Northampton on May 3 will feature national and local musicians performing alongside Best Buddies clients from Berkshire Hills Music Academy, a private music school for students with developmental disabilities. “Our mission is to show that people with special needs have talent, so we develop opportunities for them at public events,” said Andrews. For many, that alone is a huge step — almost as big as a stroll up the East Coast.
Joseph Bednar
Tags: Employment Events