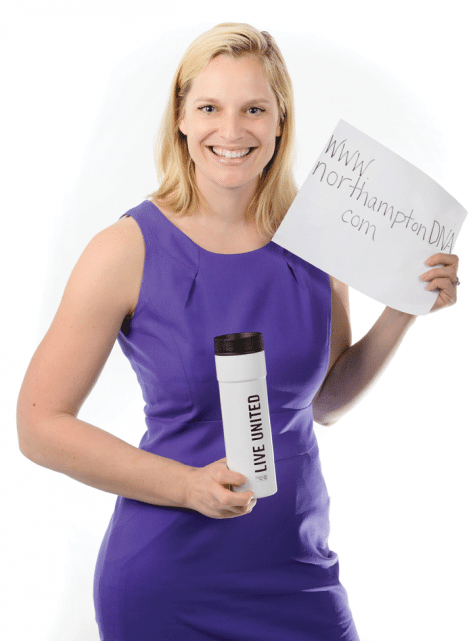 Indeed, she co-founded a locally sourced frozen-yogurt shop, called GoBerry, in Northampton and Amherst — thus creating a model others have purchased to establish their own locations — and later opened Provisions, an outlet for fine wines, craft beers, and specialty groceries on Crafts Avenue in Paradise City.

“It’s a true experience,” she said of Provisions. “You can walk in and find something you probably wouldn’t find anywhere else; everything is hand-picked, tasted, and selected — usually because it has a great story behind it.”

As does the store’s owner. Indeed, while she’s quite proud of those business ventures, she would like the top of her résumé — not to mention her introduction at the 40 Under Forty gala — to focus on what she does within the community, not what she does for a living.

“Because that’s what I take the most pleasure from right now — my work with nonprofits,” said Feinstein, noting that she has essentially chosen this time, when her children — two boys, one 3, the other just turned 1 — are still very young and her business ventures are on solid ground, to devote serious time and energy to giving back.

She’s eight months into her tenure as co-chair of the United Way of Hampshire County’s annual campaign, work she said has been extremely rewarding, while also serving as a meaningful learning experience. “It’s been really exciting to meet with different community leaders to take on work with the mission of improving life in Hampshire County; it’s been very energizing.”

Meanwhile, she played a lead role in the creation of an entity known more by its acronym, DNA, than its full name, the Downtown Northampton Assoc.

Created in the wake of the demise of the city’s business-improvement district, DNA handles marketing, maintenance, and advocacy for the city’s highly acclaimed downtown, she explained, noting that it is funded with voluntary contributions from businesses and civic organizations.

“When my husband, Alex, came to downtown Northampton and we started GoBerry, we weren’t married, and since then, we’ve gotten married, bought a house, and started a family,” she said. “The constant in that has been downtown; it’s been such a good home for us, and I’ve really enjoyed the work of forming the DNA, because I wholeheartedly believe in its mission, and I love downtown.”

So, like the frozen yogurt at her stores, Feinstein’s passion for giving back to the community comes in many flavors.