The Commerce trade show, the annual fall event staged by the Chicopee and Greater Holyoke Chambers, moves to the MassMutual Center for the 2005 edition. Organizers say the new setting has generated excitement and curiosity for this years show, which will feature more than 150 exhibitors.

That wont be a problem for those orchestrating the 2005 edition of the Commerce show, to be staged by the Chicopee and Greater Holyoke Chambers of Commerce on Nov. 3. The event moves this fall from the Big E to the $70 million MassMutual Center in downtown Springfield, which opened its doors a month ago.

“Well definitely have a new look, said Ransford, director of the Greater Holyoke chamber, with a touch of understatement in her voice. “This move to the convention center has created a good deal of excitement and curiosity.”

Yes, but it has also created some new challenges, said Gail Sherman, director of the Chicopeechamber.She told BusinessWest that, as the first of the chamber of commerce trade shows in the new convention center (the Affiliated Chambers will move the Market show there in the spring), Commerce 2005 will in many ways be getting the bugs out of an intriguing logistical exercise.

Bug-removal has been the assignment for the past several weeks, said Sherman, noting that organizers have been working on everything from parking to booth set-up to finding ways to alert those working in Springfields downtown office buildings that there is a trade show going on down the street.

As the date of the show approaches, organizers feel confident that they have taken all the bugs out. To address concerns about parking, for example, they have arranged for free parking in the lot for the old Basketball Hall of Fame and a shuttle to take exhibitors and visitors to and from the MassMutual Center.

Meanwhile, they have made arrangements with the Springfield Parking Authority to enable exhibitors and visitors to park in any of the SPA lots for amounts that will not exceed $5 — the current fee imposed at the Big E — while also staggering the times for booth set-up to facilitate that process.

“We want to create as much convenience for people as possible,” said Ransford. “We want to make it easy for people to be part of this show.”

As she walked around the MassMutual Center prior to a recent meeting to review details for the Commerce show, Sherman gestured toward the office towers in downtown Springfield.

There are thousands of people working just a few blocks away from the new convention center, she told BusinessWest, adding that this constituency presents an enormous opportunity for the planners of this years show.

Indeed, while the Big E is only a few minutes by car from the same office towers, she said, many people working in those buildings were reluctant, for one reason or another, to make the trip to West Springfield for a trade show.

“Now, they can walk just a block or two,” said Ransford, adding that the presence of such professionals at Commerce can take the show to a new, higher level.

Tapping into this audience, and making it aware of the show will be just one of the challenges awaiting organizers, who this year faced the traditional assignment of making their show fresh and different, and the added assignment of handling the many details of a staging a show in downtown Springfield.

The venue itself will go a long way toward way putting a new face on the show, said Ransford, noting that attendees and exhibitors alike will notice changes the moment they enter the massive exhibition hall.

The room will be laid out differently than the one in the Better Living Center, she said, which will remove a layer of sameness from previous shows. Meanwhile, organizers have booked a breakfast speaker they believe will provide a valuable message for attendees.

Agawam native John DiPietro, managing partner of ABC/D (Advanced Business Concepts/DiPietro), will be the keynote speaker. Author of the book You Dont Have to be Perfect to be Great, soon to be found on bookshelves, DiPietro has compiled a list of everyday tips and disciplines from his work with leading names in entertainment and sports like Kenny Rogers, Neil Diamond, Frank Sinatra, John Denver, Jay Leno, Garth Brooks, wrestlers from the WWF, and even the clowns from the Greatest Show on Earth.

A 20-year veteran of the media industry, DiPietro ran award-winning campaigns in radio, TV, public relations, and print media. He met with great success in radio sales, having led his station in sales for 15 consecutive years.

The breakfast will begin at 7:45 a.m. and lead into the show, which will begin at 9, said Ransford, adding that this years event features a healthy mix of long-time exhibitors and newcomers .

Organizers are hoping that the new location for the event will spark a large turn out, including many of those who work and own businesses in downtown Springfield.

“Its a captive audience in many respects,” said Sherman, who told BusinessWest that if even a small percentage of those working in the downtown turnout, the show can improve both the quantity and quality of its audience. By that, she meant that the shows new location will likely draw more of the decision-makers and purchasers that exhibitors want to see at a business-tobusiness show.

To attract that audience, show organizers are relying on some targeted marketing, word-of-mouth, and possibly flyers to be distributed in office towers on the day of the show.

“We need to make people aware that there is an important trade show going on right down the street,” she said, referring, again, to the Springfield office towers, but adding quickly that organizers hope to attract visitors from across Western Mass. and Northern Conn.

To accommodate those who will driving and not walking to Commerce 2005, show organizers have arranged the shuttle between the old Hall parking lot and the MassMutual Center, and also the reduced rates at the SPA parking lots — both necessary steps to help ensure a good turnout for the event.

“This is still a market where people are people are very resistent to paying for parking,” said Ransford, noting that when the Big E started charging several years ago, there was much dissention. “With the shuttle, people can park for free, and in the SPA lots, they wont pay more than $5. By taking those steps, we think were removed parking as a barrier to people coming to this event.”

A new venue – a much-heralded convention center – is a good start toward erasing such attitudes. Sherman, Ransford, and others involved with the show intend to take the curiosity factor and make the most of it. ? 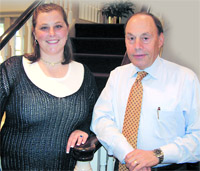