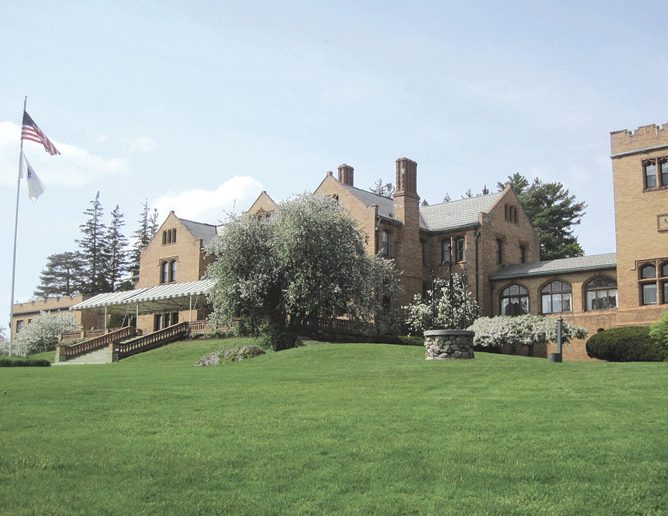 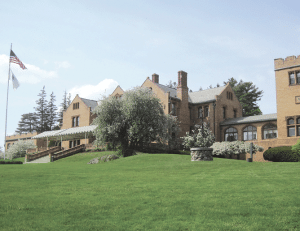 Norma Probst, director of marketing for the Gilded Age Tudor-style mansion and grounds known as Cranwell Resort, Spa & Golf Club in Lenox, has a favorite phrase for summing up this destination.
“We’re high-end, not haughty,” she said, adding that this is a sentiment that covers the leisure market as well as the corporate market for meetings and retreats.
“‘Open to the public and year-round access’ is the overall message we put out there,” noted Probst, adding that the sign over the main entrance pretty much says it all: ‘public welcome.’
And the public heeds the sign.
Indeed, 70% of the spa services at the Spa at Cranwell, the largest such facility in the Northeast, are used by the local residents, meaning those who live in and around Lenox year-round or have second homes there. Meanwhile, Sloane’s Tavern, with its panoramic mountain views overlooking the golf course, seats 80 inside and 80 outside on the deck, and sees plenty of locals for weekly meals, including brunches and holidays.
This is not what some might expect when they visit a destination spa and resort traditionally defined by such adjectives as ‘elite’ and ‘high-end,’ but it is an operating philosophy that has served this institution well over the past 20 years, enabling it to bolster its reputation and ride out the economic downturns that can cripple such facilities.
Couple this accessibility with a down-to-earth operating style (something else one might not expect at such a prestigious address), and it’s easy to understand why Cranwell is ranked among the top 150 U.S. Resorts by Condé Nast Traveler, is a member of the Historic Hotels of America (HHA), and is a recipient of a host of other travel-industry accolades. And they also help explain, along with superb resort amenities and some different life-enriching options — Probst calls it “content of value” — why this destination overlooking the Berkshires is so unique.
Of course, the resort is perhaps best-known as a site for corporate meetings and retreats, and this side of the business has grown steadily over the years, thanks to word-of-mouth referrals, but also that brand of service that has earned high praise from guests, said Tim Paulus, director of sales, who shared some commentary.
After a managers meeting, Liberty Mutual Group responded with the following: “this year, our annual meeting was quite a success; just about every attendee had some comment about the excellent food, the uniqueness of their room, or the hospitality of your staff.”
Associated General Contractors of Massachusetts had similar comments: “facilities were excellent; staff at all levels was outstanding and extremely accommodating.”
For this issue’s focus on meetings and conventions, BusinessWest offers an up-close look at Cranwell, one that will explain how, in 20 short years, it has established itself as one of the premier destinations in the region. 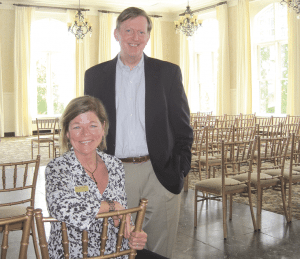 Upon entering the stunning, gateless grounds of Cranwell, one’s attention is immediately drawn to the mansion that dominates the grounds. But it quickly moves to the many other structures on the campus, built during various points of Cranwell’s 116-year history, and representing myriad architectural styles.
To understand the current campus, one needs to know its history, which is replete with multiple ownership changes and several uses, from residence to boarding school to resort, with three attempts at the latter category, the last being successful.
Both the www.cranwell.com and www.historicinns.org websites explain that, in 1853, Rev. Henry Ward Beecher — a man who had presidential aspirations and was active in the women’s suffrage and anti-slavery movements — purchased Blossom Hill, where the current Cranwell mansion now stands, for $4,500.
A scandalous affair ended Beecher’s political hopes, and his sister, Harriet Beecher Stowe, author of the famous anti-slavery novel Uncle Tom’s Cabin, inherited the home.
Gen. John Rathbone purchased the property from Beecher in 1869 and built Wyndhurst, which was enormous by any standard of the day. But in 1894, the next owner, John Sloane, a relative of the Vanderbilts and co-owner of a furniture firm, demolished that mansion and constructed another Wyndhurst, which rivaled the enormity and elegance of the first.
It was during this grand era, the Gilded Age (1880-1920), that Sloan also commissioned Frederick Law Olmsted, famous landscape designer of New York City’s Central Park (and also Forest Park in Springfield), to design Cranwell’s grounds and original gardens. The Wyndhurst, the namesake of one of the three restaurants at Cranwell, is the mansion one sees today.
In 1925, Sloane’s daughter, Evelyn, sold the estate to a group of Florida developers who tried to run the property as the Berkshire Hunt and Country Club, but the Depression ended this first real attempt at a resort destination.
Then, in 1930, Edward Cranwell purchased the property and later deeded the estate to the Society of Jesus of New England, to be turned into a private school for boys.
A young Ted Kennedy attended for a few semesters, said Probst, noting that, after prospering for many years, the school slipped into decline, closing its doors in 1975.
The property’s current owner, Burak Investments, purchased the then-bank-owned Cranwell in 1993 after it had been a condominium development and, according to Probst, was starting to be reborn as a resort, with renovations to the mansion. But this venture languished during the tepid economic times, and the company eventually went bankrupt.
Today, Cranwell Resort, Spa & Golf Club, with much of its original grandeur restored, thrives as a premier four-season resort, offering the world-class, 35,000-square-foot Spa at Cranwell, three restaurants (the award-winning Wyndhurst, the Music Room, and Sloane’s Tavern), an 18-hole championship golf course designed by Stiles and Van Cleek, and 114 deluxe rooms and suites situated in various buildings on the campus.
These structures offer stark contrasts, from the opulence of the Gilded Age evidenced in the mansion to the utilitarian, red-brick dorms built by the boarding school, now home to 38 completely refurbished guest rooms and the administrative offices. There are also 60 privately owned condominiums, two cottages, and the elegant Carriage House.
However, the Carriage House that now stands is the second on that footprint. In December 2010, an electrical fire took the original facility, built in the late 1890s, and a new structure opened roughly a year ago, just a few yards uphill from the original to take advantage of the view from the third floor. The original architectural drawings for the Carriage House were retrieved from the Boston Public Library.
“They recreated much of the same architectural features of the original, including the turrets,” said Probst proudly. That consideration to honor architectural detail is what makes Cranwell an exemplar of the HHA.
A member since 2000, Cranwell is in the elite company of 240 other historic hotels. A member has to be at least 50 years old and listed in, or eligible for, the National Register of Historic Places. Member hotels are promoted nationally and internationally to those who prefer historic settings for their leisure and business travel.
“This, too, is what Cranwell is all about,” said Probst.

Trend Setters
After guests take in the stunning, 360-degree show of green in summer, harvest colors in the fall, or the winter’s snow-covered mountains, Cranwell offers many outdoor activities, including hiking, tennis, mountain biking, cross-country skiing, bonfires, and, of course, golf. And with Cranwell’s open-door policy, the resort caters to several markets.
“We have different sectors within each department,” Probst explained, referring specifically to golf. “For instance, we have golfers with full-season memberships, guests with golf packages, local residents who book a random tee time — so we are catering to quite a diverse group of guests.”
While the spa is also a strong local draw, and Cranwell’s overall market is global, 80% of leisure, banquets, weddings, and corporate meetings are booked from clients from Massachusetts, Connecticut, New York, and New Jersey.
“We do about 50 weddings a year,” said Probst. “which is a lot considering we have exclusivity; we don’t have two Saturday-night weddings going on at one time.”
About four years ago, Probst started promoting winter weddings, which has added to the hundreds of single- and multi-day meetings and conferences that Cranwell hosts.
But since the Great Repression, some trends have emerged, said Probst and Paulus, noting that, while companies are still willing to spend (perhaps not quite as much as before), there is a greater emphasis on value. Meanwhile, there is an accompanying demand for facilities and operations that are ‘green,’ and Cranwell is responding accordingly in both cases.
“From a meeting standpoint, I’ve seen more meeting planners wanting more content in their events that are away from the business part of the agenda, and then they can rationalize why they need to have an off-site meeting,” explained Probst, adding that she’s noticed that meeting planners’ jobs have become more difficult.
“They’re under a lot of pressure to deliver a full and robust meeting,” she said, “and they’re under budget constraints much more now than ever before.”
Some of the content that brings value includes Scotch and wine tastings, chef-assisted culinary demonstrations, Afro-Caribbean drumming (a personal addition by Probst), and other unique, interactive group activities.
“We’re trying to engage our guests more and help them come up with something that is more life-enriching that they can take with them,” she noted.
Meanwhile, in the ‘green’ realm, Paulus told BusinessWest that more attention is being paid to sustainability, on the part of both individual guests and corporate meeting planners.
“It’s a huge decision factor when it comes to choosing certain hotels and resorts,” he noted. “In fact, in my office, the last five or six trade journals [of the meeting and convention industry] have ‘green’ on the cover.
“So we’re undertaking more strides to be green here,” he continued. “We’re putting ourselves through some certification processes, which have to do with how we recycle things, how we buy locally, and how we maintain the golf course, reuse rainwater, and deal with electric usage.”
Paulus pointed to the Cranwell meeting rooms and their conference worktables as one example; there are no more tablecloths or skirting because it’s an excessive use of a product that will have to be washed and dried using electricity.
A very welcome trend both Probst and Paulus are starting to see is corporations opening their purse strings a bit more over the past few years.
Like all hospitality-related businesses, resorts suffered through the Great Recession as businesses cut back on discretionary spending, said Probst, adding that the resort sector was also set back by the negative publicity that accompanied lavish corporate outings staged by companies, such as American International Group (AIG), that eventually had to be bailed out by the federal government.
“We actually changed our promotional focus to ‘resort meetings at inn prices,’” she went on. “We wanted people to know that our meeting prices really weren’t any different than a cookie-cutter hotel down the street.”

Welcome Mat
Guests don’t find anything typical about Cranwell — no slightly stuffy attitude, no restrictive warnings or ordinary accommodations in the 114 rooms and suites spread between the mansion and the other buildings.
The mansion, for example, built in the late 1800s, has “a different configuration than a typical hotel downtown that is all stacked and every room is the same; it doesn’t quite lay out that way.”
And that unusual layout is what makes an historic Gilded Age Mansion so unique; the room shapes and the architectural detail, along with the 17 different fireplaces and elegant furniture, all add up to a memorable experience.
And that goes for all guests at the Cranwell, from corporate CEOs to those for whom the ‘public welcome’ sign was erected.