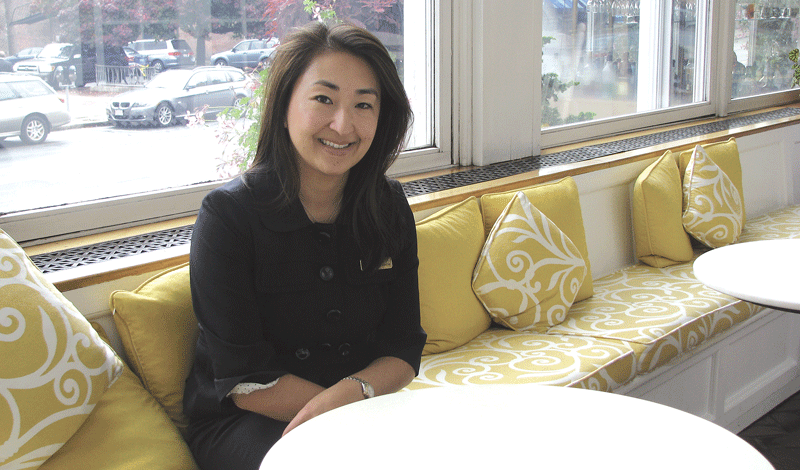 Ruby Meng says many companies pulled back on holiday parties during the recession, but they’re coming back now.

It was clear to Erin Corriveau that the corporate holiday party was back when a past client called to book a December get-together — in April.

“The days fly off — there are only so many Thursday, Friday, and Saturday nights” between Thanksgiving and the New Year, considered prime holiday-party season, said Corriveau, catering and events manager at Lattitude in West Springfield. “We had a few people book very early — but you can never actually book a date too early. They do run out quickly.”

In fact, Corriveau said, Lattitude’s new banquet room — which opened last November and allowed the restaurant to handle much larger parties than before — was completely booked two months ago for every Thursday, Friday, and Saturday evening in December.

“A lot of companies have been with us for many years — well over 10 years — and they tend to book year after year,” added Ruby Meng, director of sales at the Hotel Northampton, which has also experienced robust holiday-season reservations this year.

“We’re booked pretty solid on weekends, and weekdays are starting to get close. People are looking to do gatherings and holiday parties, and they’ve also inquired about holiday brunches, a little earlier in the daytime. It’s a creative way to capture more of their employees, who may be busy in the evening or on weekends.

“We’re doing pretty well,” she added, noting that many businesses pulled back on entertainment budgets during the Great Recession, but most are returning. “Companies are bouncing back. A few years back was tough, but we are seeing more companies opening up and being more generous, doing giveaways, raffles, things like that for their employees.”

Robin Ann Brown, director of sales at the Lord Jeffery Inn in Amherst, said holiday gatherings are popular, but not always under that moniker. “A lot of companies are calling them ‘annual events’ or ‘awards banquets,’ versus an actual holiday party.”

She said the industry hasn’t completely recovered from the drop in sales during the recession, simply because many companies that cut parties from the budget haven’t put them back in, even though times are better.

Still, according to Jennifer Marion, assistant director of events for the Willits-Hallowell Center at Mount Holyoke College, business has picked up this year, and companies are starting to spend more money.

“One party with a menu already confirmed for December is doing clams on the half shell, baked stuffed lobster … they’re definitely choosing more elaborate menus that, in the past, their budgets wouldn’t have allowed them to do.”

What’s also changing is what style of party companies are seeking out. For this issue’s focus on holiday party planning, BusinessWest looks into the current trends, and why this season has so many restaurants and banquet facilities feeling merry indeed.

Most area facilities are reporting a definite shift away from sit-down dinners in favor of cocktail parties, food stations, and passed hors d’ouevres, which encourage people to mingle and interact.

“One of the trends we’ve been seeing is stations instead of a true-sit down — chef carvings, high-end hors d’ouevres, passed wine, passed hot cocoa with peppermint Schnapps,” Brown said. “And a lot of people are doing more chamber music or jazz bands than dancing music.”

“We’re getting both,” Meng said. “More people are starting to inquire about station packages, moving toward a cocktail style. People are getting a little more creative, too, maybe bringing in a comedian or activities to keep people entertained. And, of course, bands and dancing, those are a given.”

Added Marion, “we can do either a long cocktail party with a lot of hand-passed hors d’ouevres or stations, or do a bigger, full sit-down meal. Buffets are most popular right now; they give people more choices. But, if it’s a more formal group, they tend to go more with a served meal.”

Corriveau said it’s important to be flexible because of all the different party preferences in the business world — and at Lattitude, that flexibility extends to the site of the party.

“A lot of business parties are held on site, but we also do off-site deliveries and catering,” she noted, adding that the day and location of business parties often depends on the size of the company. “Monday through Wednesday, the crowd tends to be smaller businesses, versus the larger companies that tend to take up the weekend dates. Or, if businesses want a typical potluck lunch but don’t feel like getting dressed up and going somewhere, we can bring a holiday party to them on company premises.”

Like others we spoke with, Corriveau has seen a shift away from formal, seated dinners. “We used to do more sit-down affairs, and businesses can certainly do that, but more companies that are booking parties want their employees to enjoy themselves, to mix and mingle and socialize. We do a lot more of the social, passed-appetizer type of party. When you’re home having a Christmas party, everyone is moving around, and that’s the feel they’re going for. We’re still doing sit-down parties, but people seem to be moving away from that.”

Companies are also increasingly moving away from Saturday nights and asking for Thursday and Friday reservations, Brown said. “Family time is limited, so a lot of companies choose not to do it on weekend nights, so people can spend time with their families at home.”

With many of these trends consistent across the industry, how do the area’s many banquet facilities set themselves apart among fierce competition? In the Lord Jeff’s case, it’s emphasizing the facility’s embrace of the holiday season and its traditions.

“People gravitate toward the Lord Jeffery Inn because we’re an historic inn, and holidays have that historic tradition about it. The Lord Jeff speaks tradition,” Brown said, citing, as examples, a Sunday brunch with Santa, high tea on Saturdays, and carolers on Friday nights.

“Those are the traditions the inn has put in place since we renovated, and people have been very receptive. During the holidays, we’re extremely busy.”

The inn can accommodate both large and small gatherings, she added. “A lot of companies don’t have large holiday parties, so for parties of, say, six to 12, we’ll do smaller events in our beautiful greenhouse room, where you can see it snowing right on the roof, and fireplaces all around. When companies don’t want to spend money on large events, the greenhouse room holds up to 18.”

She said the nostalgic holiday appeal of the facility is reflected even in its twinkling seasonal lights, which are visible from the Commons in downtown Amherst, making the Lord Jeffery Inn an attractive option for parties of all sizes.

“Even if companies are not going to do a full dinner, they might take out the board of directors or top employees for a dinner for 20,” she explained. “They like the carolers on Friday, and the high tea. People drive over an hour to come to high tea; again, it’s a holiday tradition.”

“Prior to the banquet room, we had a smaller room, and we’d certainly get smaller holiday-party requests,” Corriveau said. “But since adding the banquet room last year, we’ve had our share of larger parties. We were full every Thursday, Friday, and Saturday in December two months ago. People were calling early. We even had somebody book a holiday party this past April.”

The new space boasts a private bar, sandblasted brick walls, and steel beams, and is “very much a reflection of the restaurant,” she said, adding that it holds about 120 seated and up top 150 standing.

“A lot of people are just learning about it. It’s literally where Memo’s used to be in this building,” Corriveau said. “Unless they’re walking in it, they don’t realize it’s there. All of a sudden, they walk in and ask, ‘what is this?’ We do a lot of business parties, weddings, bridal showers, rehearsal dinners, bereavements, a lot of events. It’s warm and inviting. That’s the number-one thing people say when they walk into that room.” 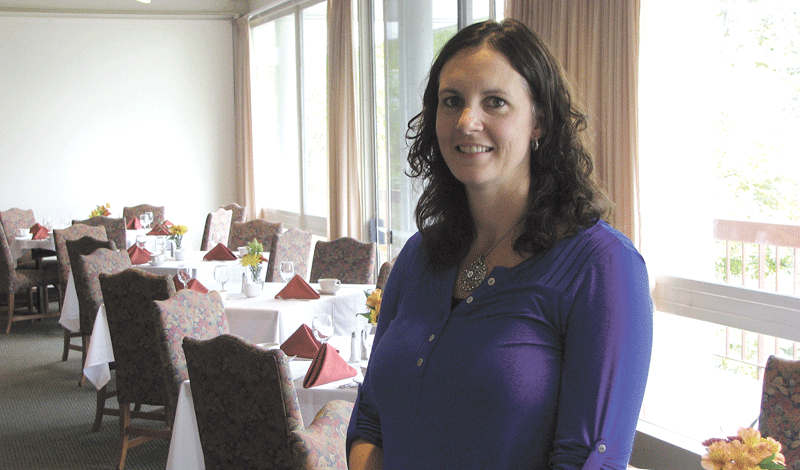 Jen Marion says the Willits-Hallowell Center can provide any type of party setup, but buffets are most popular right now.

Inviting is certainly a trait banquet facilities are aiming for, but so is convenience.

“We’ve done parties for a church group, insurance companies … parties ranging in size from 30 people to as many as 100,” Marion said of her facility on the scenic Mount Holyoke campus. “We have holiday packages, including hors d’ouevres, dinner, dessert, and coffee, and we’re happy to customize that for people with select menus and décor. You pick a menu and let the guests know, and we do the rest. It makes it easy in terms of planning. Usually one consultation appointment with me, and it’s over.”

Well, except for the actual party, that is. The season for celebrating is only beginning. 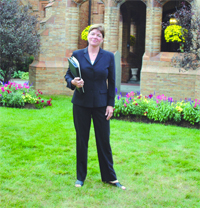