Ski Resorts Aim for New Heights, No Matter the Weather 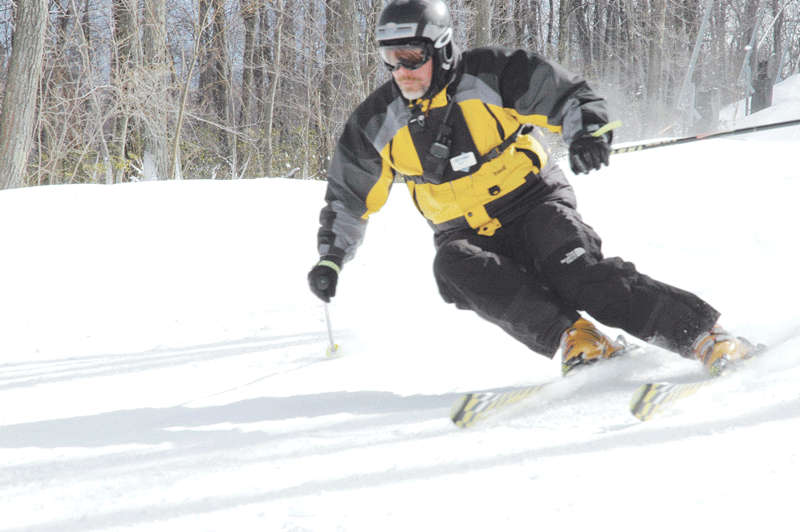 Matt Sawyer not only works for Ski Butternut, he also enjoys gliding down the slopes there.

Tyler Fairbank has long understood the relationship between weather and a ski resort’s success, but last winter hammered home the message.

“The thing we learned — well, we’ve known it for years, but it was exacerbated last year — is that people hate to ski in rain or super, super cold,” said Fairbank, president of Jiminy Peak Mountain Resort in Hancock. “So we had an OK season — not a bad season, but OK.”

That’s because last winter, in case you’ve forgotten, was super, super cold, at least until a comparatively temperate March.

“March helped make up a little for what might have been a subpar season, and it turned out to be an OK season overall — again, not bad, but not great from a business standpoint,” he said. “We were really consistent with the rest of the country in that we dealt with some extreme cold for sure. And the timing of some early-season rain events didn’t help much. Followed by a midseason of really super-cold events, that had us behind the eight-ball.”

Fairbank explained further what he meant by timing. “Obviously, this is a weather-dependent industry, but when people talk about a cold winter or a rainy winter, that’s the macro picture. The micro picture is the timing of events. A rain event on Friday or Saturday can work against you, but if it rains on Monday, Tuesday, or Wednesday, we have an opportunity to recover later in the week. We can have a good season if the micro events cooperate.”

At Ski Butternut in Great Barrington, about 45 minutes south of Jiminy Peak, the weather, though bitterly cold, cooperated a little better, said Matthew Sawyer, director of marketing and sales, and the resort was able to maintain a consistent trail quality throughout the season.

“But that was due mostly to the fact that we have enhanced snow-making systems and can guarantee good-quality snow, despite what Mother Nature throws at us, good or bad,” he explained.

“Last year was actually a very good year for keeping snow on the mountain,” Sawyer continued. “We didn’t get a lot of new snow — 67 inches, when it’s usually 110 to 120 inches — but it was cold, so the snow we did get stayed around; it didn’t go through a lot of freeze-and-thaw cycles.”

In a typical season, he explained, a mountain deals with about five freeze-thaw events, which can wreak havoc on trail quality in the short term. But with so many days last winter topping out in the low 20s, or even the teens — perfect snow-making conditions — it didn’t matter that it didn’t snow very much, because the snow that did fall, or was shot through Ski Butternut’s state-of-the-art snow-making system, tended to stick around.

“Last year, by the second week of December, we were able to open every single trail,” Sawyer said. “Very few mountains on the East Coast did that, and we did it by snow-making alone. There was no natural snow during that time, but also no freeze-thaw cycle. When you get a rain or warm event, 55 degrees and sunshine, that obviously changes the conditions.

“People were raving last year about our good snow, despite not getting as much natural snow as we usually see,” he went on. “We put a lot of money into the snow-making guns and, more importantly, the pumphouse.”

He explained that temperatures below 26 degrees are ideal for making snow, because the water that emerges from the nozzles in tiny droplets are almost instantly supercooled to create the best-quality snow. “It used to be, everyone wanted to ski after a natural snowstorm, and you can still do that. It is the best snow going; Mother Nature has a lock on that market. But we can make some pretty good snow with just cold weather.”

Recognizing the importance of snow making, Jiminy Peak has also made significant enhancements to its equipment, Fairbank said.

“Here in Southern New England, you have to have a super-powerful snow-making plant, and we are constantly tweaking it year after year,” he told BusinessWest. “We’re a pretty major player in the region, and we’ve grown our market share, and we’re anticipating a very, very busy season. But we have to continue to invest in the resort.

“It’s a capital-intensive business,” he continued. “Twenty-five years ago, there were twice as many resorts. But people didn’t do the capital investments that are needed, and now they’re gone. It’s an important part of our approach — we invest about $1 million each year into all this stuff, and we hope it continues to add up to success.”

For this issue’s focus on sports and recreation, we check out the conditions at two Berkshires ski resorts — and the industry in general, one that faces some challenges in keeping people returning over and over for their downhill rush.

“As a general rule, skiing is growing,” Sawyer told BusinessWest. “We’re not seeing the growth we saw back in the ’60s, ’70s, and ’80s, but every sport is challenged right now; there are so many options, and kids are involved in so many sports.”

One thing keeping people coming back is an industry-wide emphasis on reducing prices. “It’s much more affordable. A season pass here is $300 for an adult. Sixteen years ago, it was $499. A midweek lift ticket is only $25.”

Sawyer said Ski Butternut has been at the forefront when it comes to making skiing more affordable, which has encouraged more families to give the activity a try. “Before, you had to ski 17 [weekend] days to justify a pass. We brought it down to five. We realize so many things are competing for people’s time, and this has made the commitment easier. We’re trying to reinvigorate people through a quality product and affordable pricing.”

Fairbank agreed. “I’m on the board of the National Ski Areas Assoc., and I spend a lot of time on this topic,” he said. “When you look at national trends and regional trends, from a long-term perspective, when you adjust for weather, we’re seeing slow and steady growth, if not enormous growth. 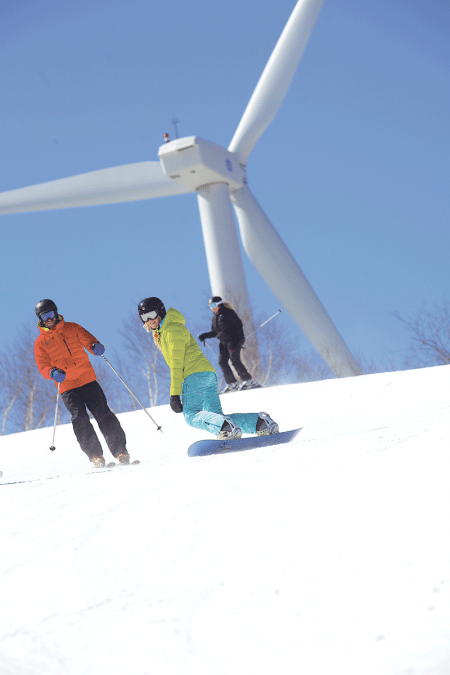 Skiers and snowboarders take in the view as they glide down a hill at Jiminy Peak.

“That being said, however, there are some other dynamics happening within the industry,” he went on. “The number of people trying it for the first time, over the last few years, is starting to drop — not big numbers, but big enough to say, ‘hmmm … that’s not something we want to see.’”

The question that raises, of course, is where the growth is coming from if the number of first-time skiers is declining. The answer lies with the regulars.

“The core of people who love to ski, they really love to ski,” Fairbank said, and that includes the retirement-age crowd. But the older Baby Boomers are leaving the activity in large numbers — “there’s not enough Advil left on the planet to make some of those people want to ski anymore” — and the younger Boomers won’t be far behind.

The key, then, is to replace those who leave the sport with new blood — and both Gen-Xers and Millennials are skiing at healthy rates, Fairbank said. The worry, he said, is what’s known as the conversion rate, or the percentage of first-timers who embrace the slopes and return for more. That figure, nationally, currently stands at around 15%, and the industry needs to find ways to boost it, he said, to truly ensure its long-term growth.

“The conversion of first-time skiers to lifelong skiers is a big challenge for the industry, and that 15% conversion rate is a somewhat alarming statistic,” he went on, adding that Jiminy Peak and its sister resorts, Cranwell Resort in Lenox and Bromley Mountain Resort in Vermont, have set a goal of doubling that rate — with some very specific strategies.

It starts, he said, with creating realistic expectations for first-timers, which includes everything from maintaining a strong FAQ page on the website to moving newcomers through the lines efficiently and answering all their questions. “We want to educate people before they even get here, so their expectations are well-developed.”

The second step is to create educational programming that will encourage first-timers, not make the experience of putting on skis or a board for the first time a stressful one. To that end, Jiminy Peak uses an innovative training method called ‘terrain-based learning’ that uses shaped snow to teach elements of skiing before the rookie ever hits a hill.

“They’re able to relax and feel the sensations while learning, but do it in a controlled environment where they’re not fearful,” Fairbank said. “This seems to have really taken hold. People love it, and we’re seeing them get better quickly. That’s a big part of it. Skiing is not easy, and our emphasis on making it easier eliminates the barrier of frustration and replaces it with fun. In fact, ‘make it easy, make it fun’ is our whole approach to the business, and terrain-based learning is a big piece of it.”

One trend that has caught the ski industry by surprise is a sudden decline in the popularity of snowboarding, according to a report published in the National Ski Areas Association Journal.

In its ﬁrst decade of popularity, snowboarding grew from a 7.7% share of the skier market in 1991 to 32.6% in 2000, a surge that coincided with a slight decline in the popularity of skiing.

“Snowboarding lost some of its mojo around 2005 and 2006, and we’ve been running on fumes since then,” Nate Fristoe director of operations for RRC Associates, which tracks industry trends, wrote in the journal recently. “It’s like any kind of trend — full of all sorts of energy until it isn’t.”

On the other hand, Ski Butternut’s tubing park has grown in popularity every year, Sawyer said, noting that the area expanded from seven lanes to eight last year.

“What’s nice about tubing is, it’s usually a different clientele than skiers. Sure, we’re kid-friendly here, and often mom, dad, and a kid still have energy after a day of skiing, so to burn off more energy before dinner, they walk over to the tubing area,” he said. “But we have different customers there, too, who want to enjoy an outdoor, mountain experience but don’t want to learn to ski. Tubing takes no skill, and families can enjoy it all together. It’s not a competition; it’s a chance to have some fun and giggles. It’s a great social activity.”

Fairbank, whose resort also features an aerial park, mountain biking, and other activities during the warmer months, certainly understands that.

“As an industry, we don’t pay as much attention to the fun factor as we should,” he said. “What can we do to make it easier and more fun? It sounds so basic and so simple, but this is an industry that’s done it a certain way for a long time, and we need to take it to the next level.”

And hope the weather cooperates.