The Obesity Epidemic Broadens the Role of Today’s Pharmacists 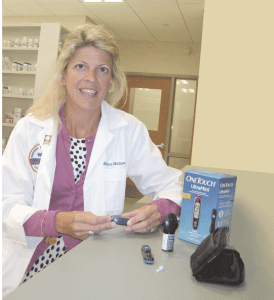 In June, the American Medical Assoc. (AMA) made official what all those in healthcare already knew and understood — that obesity wasn’t simply a problem, but a disease, and one that reached epidemic proportions in this country.
The motivation behind the declaration was to advance treatment and prevention of obesity, one of the leading causes of diabetes, said Ardis Dee Haven, president of the AMA, in remarks made in June. “This issues a call for a paradigm shift in the way the medical community tackles this complicated issue so that we can reduce the number of Americans suffering from the effects of heart disease, diabetes, disability, and other potentially life-changing health conditions.”
And perhaps nowhere is this shift being seen and felt more than in the realm of pharmacology, said Melissa Mattison, clinical assistant professor at the Western New England University College of Pharmacy, who also spent 18 years as a pharmacist at Walgreens.
Indeed, the emergence of obesity as a major issue in healthcare — and the many health problems it leads to — has been a huge factor in an ongoing evolution in the role pharmacists play, she told BusinessWest.
“Diabetes is definitely an epidemic,” she explained. “As clinicians, we need to educate patients that obesity, which can lead to diabetes, is a preventable disease and that there are many lifestyle modifications that a patient can embrace.”
Elaborating, she said that obesity and the problems that stem from it have impacted myriad aspects of pharmacology — from the products sold and medications dispensed to how diabetes-related items are displayed in the store.
But perhaps the biggest change has come in the relationship between the patient and the pharmacist, she went on. While there has always been an educational component to this profession — it’s never been about simply putting pills in bottles — that aspect of the job description has become far more prominent in recent years.
And obesity and its correlation to diabetes and other health problems is a big reason why.
“The doctor may see the diabetes patient once a month or once every three months, but the pharmacist sees that patient almost every week,” said Mattison, noting that such patients generally take 10 to 12 medications. “And if you see me that many times a week, we start to form a close relationship.”
Skip Matthews agreed. He’s president of the independent and locally owned Lewis & Clark Drug and Medical Supply. He’s not a pharmacist, but manages his family’s 48-year-old business, which includes two pharamacies and two medical-equipment stores in the Springfield area.
“We’ve always seen patients with diabetes, but the demand has really grown,” he explained, adding that this surge in volume affects a host of decisions he makes regarding his stores.
“Our pharmacies are geared toward those with multiple conditions, maybe a little more than a chain pharmacy,” he continued. “And we’ll see diabetes, hypertension, cholesterol, and anything to do with the heart — and every one of those issues is directly or indirectly related to obesity.”
For this issue, BusinessWest talked with area experts about how what has become the nation’s most pressing health problem has in many ways changed the job description for pharmacists and made them more prominent players in the delivery of healthcare.

It’s Weighing on Them
When it comes to obesity, diabetes, and the collective impact on the role pharmacists play, the numbers tell the story — or a big part of it, anyway.
The most recent statistics from the Centers for Disease Control and Prevention show that more than 23 million Americans, or close to 8% of the population, have diabetes, and more than one-third of the adults in this country (35.7%) are clinically obese. These numbers have doubled in just the past two decades, and current projections show that the number of people with diabetes in the U.S. will rise to 48 million by 2050.
And this dangerous trend is quite visible in Western Mass. and especially its largest city. According to the Mass. Behaviorial Risk Factor Surveillance System, Springfield has the highest percentage of adults diagnosed with diabetes in the Commonwealth (13.1%) and the highest percentage of adults being told they have pre-diabetes (10.2%).
The impact of all this on pharmacies is made clear by statistics compiled by the Pharmacy Times which show that, while the average consumer spends $300 annually on retail pharmacy purchases, a consumer diagnosed with diabetes will spend $2,500 on average each year in medication, insulin, blood-glucose-monitoring products, and other over-the-counter supplies.
These alarming statistics help explain everything from the rising numbers of health screenings in pharmacies (especially the larger chains) to the fact that many different types of medical equipment have been altered and recalibrated to reflect a much heavier America.
“It really sticks out on the medical-equipment side,” said Matthews, noting that the walkers, canes, hospital beds, bath-transfer seats and commodes that his stores sell, which once were ‘200-pound rated’ (to support patients up to that weight), now come rated at 250, 300, or 350 and higher for the morbidly obese. “The manufacturers have changed what they make, and we’ve had to change our product mix accordingly.”
But perhaps the biggest change that can be traced to those statistics has been the emergence of the pharmacist as educator and counselor, said Mattison.
Elaborating, she said that, in many respects, the pharmacist acts as a liaison between the patient and the primary-care physician.
“In pharmacy school, our focus is not just on the disease state and what the medications are used for,” she noted. “Now, the pharmacist has the responsibility, and the privilege, to spend time with the patient and say, ‘look, Mrs. Jones, we did your screening, and your body-mass index is in the obesity range; what do you know about that? Can I talk to you about that?’”
Matthews agreed.
“There is a greater recognition of the role of pharmacists, even by insurance companies and doctors, in just the past five years, and that wasn’t always the case,” he told BusinessWest. “That’s because the pharmacist brings a lot of value, due to his or her position in healthcare between the doctor and the patient.”

Dispensing Information
This larger, more prominent role takes many forms, said those we spoke with, who noted, for starters, that pharmacists are doing much more, historically speaking, to hold patients accountable for adhering to their medication and recommended lifestyle changes.
“Typically, diabetic patient-adherence rates are somewhere around 50%, so they don’t take their medication every day, and for numerous reasons,” Mattison told BusinessWest. “Adherence is a big push now with pharmacist intervention.”
There’s also that educational component, she went on, adding quickly that, while pharmacists have always welcomed and answered questions, they’re doing much more of that today.
“Now, they [pharmacists] are on the ground floor, and many of the new pharmacists are out on the floor with an iPad and helping customers,” she explained. “They are the first person that the patient sees [after a doctor’s visit], and they can be a continuing point of contact.”
This ongoing evolution in the pharmacist’s role brings with it both opportunities and challenges, said Matthews and Mattison.
In that first category, they place the prospects for growth that come with quality customer service, which takes on new meaning in the expanded role. In other words, pharmacies and individual pharmacists can stand out as a result of how well they accept — and carry out — their new responsibilities.
Mattison added that pharmacies have an advantage over other retail outlets in that they have the opportunity to sell the self-management items diabetic patients need, and also the experience and knowledge needed to offer positive medical support. For this reason, retail pharmacists may choose to place their diabetes-care display near the pharmacist’s counter, or place weight-control and nutritional foods, vitamins, and dietary supplements near the diabetes-care section. The marketing-savvy pharmacists will offer more and more product demonstrations, educational sessions, nutritional advice, blood-pressure screenings, coupons, and store sales.
As for challenges, perhaps the biggest stems from the fact that, in simple terms, pharmacists are not paid to dispense information and be that liaison between patient and physician, said Mattison, adding that doing so takes time, which in this business (or any other, for that matter) is money.
“The expanding role of the pharmacist now involves much more than counting pills,” she explained. “But the problem becomes, who’s going to pay for it, or make it reimbursable, and create a profitable model for the pharmacy?”
Another challenge, Mattison continued, stems from the fact that this broader, pharmacist-as-educator role requires a skill set that for many must be acquired.
And the university is responding accordingly, she said, adding that, in addition to a year-long class focused on the business skills needed for setting up and then operating a successful pharmacy, the school also includes a customer-service component within its healthcare communications class.
It teaches students how to talk compassionately with patients, adherence to a doctor’s plan, and how to navigate customers’ financial, socio-economic, and language issues.
One of the more hands-on aspects of healthcare communications is the process of physically putting the student in the patient’s position, she noted, by making them wear heavy gloves and macular-degeneration goggles that mimic deteriorating eyesight. They’re then asked to read a prescription or open a bottle of pills.
“And they find they can’t do it,” she went on. “So now this 22-year old student gets the perspective of a 78-year old patient, and it teaches them empathy.”

Counting on Them
Empathy is just one of many skills pharmacists now need to do their jobs effectively.
Indeed, where once being able to count was the most visible skill set, now, those in this profession must be able to listen, consult, and help lead their customers to healthier lifestyes.
The epidemic of obesity has much to do with this phenomenon, and all indications are that it will continue to be a large problem — in every sense of that phrase — for a long time to come.

Why Is Online Learning Seeing a Surge in Popularity?