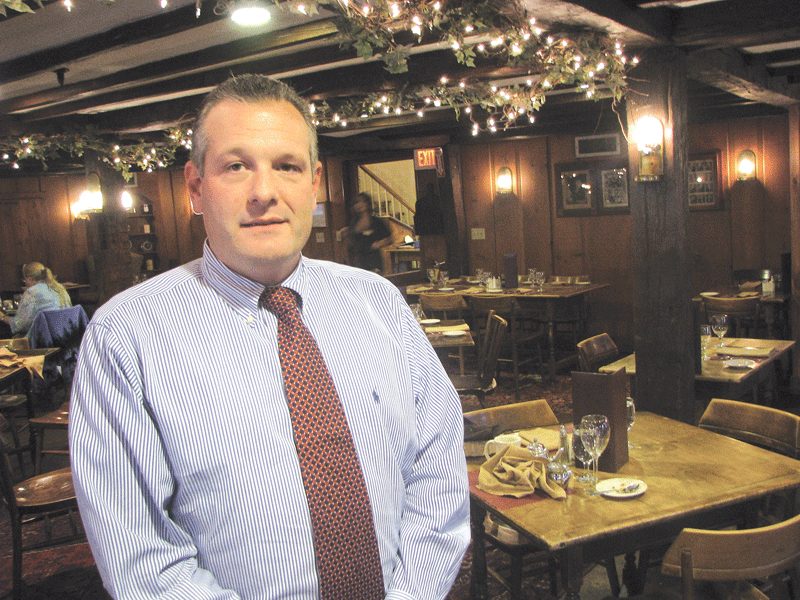 Sturbridge Landmark Has Location and Charm — in Abundance 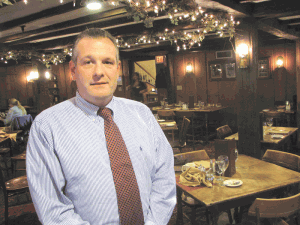 Back when things got started, in 1771, the Publick House was a stagecoach stop, a place to eat and sleep on the way to somewhere else. In recent times, though, this landmark has become a true destination, one known for its classic, charm, holiday decorations, traditional New England cuisine, and even a purported ghost sighting or two.

It’s called the Library.
This is one of the smaller dining rooms at the Publick House in Sturbridge. It was given that name because there are old books lining the walls — well, sort of.
Because this room is rather small and space was needed to comfortably sit people and serve them, the books, perhaps 100 or more of them, were sawed in half decades ago (no one really knows when), placed within shallow bookcases, and glued to the walls. Visitors who don’t know this have tried to pull books out, sometimes tearing the binding in the process.
“We’ve thought about getting some new volumes, but the ones with the binding coming off … they add a little old charm to the room,” said Michael Glick, general manager of this landmark, parts of which date back to 1771.
Charm can be found in many places here, and in many forms. This includes some of the other dining facilities, such as the Card Room — which dates back to when the Publick House was a stagecoach stop; women were not allowed in this room then, and had to gather outside in the ‘women’s sitting room,’ which still exists today, although men sit there, too — and the Pumpkin Room, so named because of the wood used within.
But it also includes traditions, such as the scarecrow-decorating contest recently staged, the ‘breakfast with Santa’ event upcoming, and the smiley-face cookies given to each child upon completion of their meal. There’s also the menu, dominated by old New England favorites, such as pot roast, chicken pot pie, and especially turkey and sweet rolls.
And then, there are the ghost stories. “No one here now has actually seen one,” said Glick, “but there are stories … people say we have ghosts here, and we’ve had a few mediums in here to look around.”
Take all this charm and put it at what would have to be called the crossroads of Southern New England — Sturbridge sits at the intersection of I-84, the Mass. Turnpike, and Route 20 — and it would certainly seem like a recipe for business success. And some of the numbers Glick has would certainly certainly confirm this.
He estimates that roughly 1,500 people will be served dinner this Thanksgiving, the busiest day of the year for the Publick House. Meanwhile, the facility will probably handle 135 weddings this calendar year, including 11 in December, a popular month for such ceremonies at this institution because of its elaborate holiday decorations. Meanwhile, the landmark’s bakery, which records more than $500,000 in business annually by itself, will turn out more than 300,000 of those sweet rolls each year, as well as 950 pies each Thanksgiving. As for turkey, they serve more than 60,000 pounds per annum.
Overall, more than 110,000 people will visit the Publick House complex annually, for lunch, dinner, banquets, weddings, assorted get-togethers, and, of course, Thanksgiving. Some will stay in one of 115 guest rooms, 23 at the historic inn, or 92 at a motor lodge across the 62-acre complex.
For this special look at the restaurant sector, BusinessWest visits the Publick House and details why it has become a destination for people from across New England and beyond.

At a Crossroads
As he discussed the Publick House, its history, and location, Glick used the word ‘converge’ early and often.
People do a lot of that in Sturbridge, he explained, noting that, because the community is approximately in the center of Southern New England, and easy to get to from Springfield, Hartford, Worcester, Boston, New York, and just about anywhere else, families, business groups, civic organizations, and even senior-living complexes will make this the place to meet.
The ease with which people can get to the Publick House — not to mention its track record for success — is borne out in the results of a recently conducted survey of patrons.
“We asked people how far they came, and for how long they’ve been coming here,” said Glick. “The survey revealed that, on average, they’ve been coming for more than 25 years, and traveling more than 50 miles.”
Those numbers would indicate that the Publick House is truly a destination, something it wasn’t when it was founded as an inn and tavern by Col. Ebenezer Crafts in 1771. Then, as now, at least in some respects, it was a place to stop on the way to somewhere else.
Indeed, located just off the old Boston Post Road (now Route 20), the Publick House was a popular stop for those traveling or bringing commerce across the state to its capital, or from New York to Boston, something that had to be done by land during the War of 1812 because of a British blockade in the Atlantic.
Now owned by the Harrington family, which also owns the Hawthorne Inn in Salem, the Publick House complex has been expanded numerous times over the years. As he led BusinessWest on a tour, Glick pointed out a maze of hallways and staircases designed to connect buildings and additions.
Today, there are two main dining areas — the Tap Room, which can seat just over 100, and Ebenezer’s Tavern, which can host about 80. There are several other smaller rooms used for a la carte dining, however, including the Library, the Pumpkin Room, the Card Room, the Pineapple Room (so-named because the wallpaper features that fruit), and the Conference Room, among others.
There are also some larger facilities, such as the Barn Room, called that because it was an actual barn decades ago. It is often used for receptions prior to weddings and other small functions. There’s also Crafts Hall, named after the founder, obviously, which can seat 50 and is ideal for corporate meetings, and Paige Hall, named after a long-time innkeeper, and the most recent addition to the complex, in 1981. It was built over an old deck, can seat more than 200 people, and has become popular for class reunions, team functions, and other gatherings.

Talking Turkey
As he took BusinessWest through each of the rooms at the Publick House, Glick said many are not in use every night (and the restaurant is open 365 days a year), but do come into play for various types of functions or when the complex is especially busy.
But each one is full on Thanksgiving, he noted quickly. “Every nook and cranny of the place is used; there are tables everywhere — but in a comfortable fashion.”
In the Library, for example, there’s a large table that can sit 12 people comfortably. There’s also a small, alcove-like space. “People can put the kids there, just like they might at home,” he said.
Meanwhile, the bakery, which is humming most days, is especially busy on Thanksgiving and, even more so, on the Wednesday before, Glick noted. “You’ll usually find me working in the bake shop on Thanksgiving Eve,” he said, adding that many additional hands are needed to take and ring up orders, and box the pies and other desserts made for that holiday. “We sell thousands of sweet rolls for Thanksgiving.”
As for the menu, Glick said, “every day is Thanksgiving.” By that, he meant that turkey is always a popular choice, and in fact, there are two options within the ‘classics’ section of the menu — a roasted turkey dinner and a ‘Publick House Thanksgiving dinner.’ The latter comes with deep-dish apple pie or Indian pudding with ice cream, and coffee or tea.
Other ‘classics’ include baked scrod, fish and chips, chicken pot pie, shepherd’s pie, and prime rib. There is a also a ‘specialty fare’ page of the menu that includes ‘Chicken Quinn’ (topped with lobster meat, asparagus, and hollandaise sauce), barbequed salmon, peppercorn-crusted swordfish, a half rack of lamb, and Jamaican pork chop topped with pineapple salsa.
“We’re old-world New England,” Glick said, when searching for words to describe the cuisine. “Things like pot roast, chicken pot pie, lobster pie … these are New England classics; we have menus going back to the ’50s, and those items are on them — and they’ll always be there.
“What we say in our advertising,” he continued, “is that our chefs have taken those old favorites and added modern, unique twists to that menu.”
Overall, the Publick House has held up well during the prolonged downturn, said Glick, noting quickly that, like all establishments of this kind, this landmark has been impacted by the wide decline in discretionary spending, but also has benefited in some ways.
In response the global belt-tightening, the Publick House has done some discounting, which is somewhat out of character, he explained, but the specials, such as a two-for-one deal covering lunch or dinner on Mondays, Tuesdays, and Wednesdays, have certainly helped increase volume on those traditionally slower days of the week.
“Business is definitely a little slower on Thursday because of that coupon,” he explained. “But now, it’s not unusual for us to have 80 people in for dinner on a Monday, whereas before the coupon, and before the recession started, we wouldn’t approach that volume.”
The wedding business, meanwhile, has been helped by the addition of a large tent — in place between May and November — that provides couples with a different, lower-priced option. The tent has played a key role in boosting overall wedding bookings from just over 100 on average to more than 130 for 2010, and 27 ‘tent’ weddings have already been booked for 2011.
The tent, the discounting, the continuation of age-old traditions, and the addition of some new ones have definitely helped bring more people to the old inn on Route 131, said Glick, from across town, but also across the region.

The Spirit Moves Them
Glick recently received a book in the mail, an autographed copy of New England Ghosts, by David J. Pitkin. In it, on page 209 under the subheading “A Publick Ghost,” Pitkin relays the story of a couple that had an apparent encounter with a ghost while staying at the inn during the holidays in 2000.
Actually, it was the young woman who saw it while her husband was out of the room for a moment. “All at once, I had an experience I’ll never forget,” she’s quoted as saying. “To the left of the room’s doorway, another person appeared. It was an older man in a top hat and wearing what looked like an old, black, Inverness-style caped coat. He didn’t move, and didn’t seem to look directly at me. He was there for a minute surrounded by a mist or fog. He was visible for just a few minutes, and then he was no longer there.”
Glick had yet to read that account before meeting with BusinessWest, but he was aware of the story mentioned, as well as a few others. He said one of the landmark’s bartenders insisted that, through a window, he saw the ghost of Mehetable Chandler, Ebenezer Crafts’ wife, sitting at a table in the Pineapple Room (there’s a picture of her on one of the walls, so the staff would know what she looked like). And there was another incident where several guests, in different parties, said they were awoken by the sounds of glass breaking and other indications of a large-scale incident in the Tap Room. No evidence of anything was ever found.
Whether there’s any substance to these reported sightings, or encounters, is a matter of conjecture. But ghosts aside, there are plenty of other sources of charm at the Publick House — not to mention turkey and sweet rolls.
Together, it all makes this 240-year-old landmark a great place to converge.