Valley Gives Looks to Build on a Successful First Year 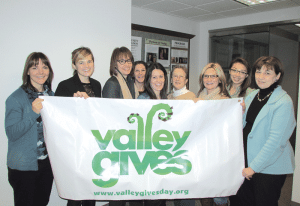 Valley Gives, which raised $1 million for area nonprofits and schools its first year, has set the ambitious goal of $2 million for the 2013 edition.

When organizers of Valley Gives, a one-day online fund-raising event for area nonprofits and schools, launched their venture nearly a year ago, they did so with ambitious expectations — for participation among those nonprofits, the number of donors, and the money raised.
And they surpassed all of them.
More than 6,000 donors from across the Pioneer Valley pledged more than $1 million to 250 participating nonprofits, said Kristin Leutz, vice president of Philanthropic Services for the Community Foundation of Western Massachusetts, which helped orchestrate the program. This performance enabled the initiative to live up both halves of its name — it is, indeed, a region-wide effort, and people certainly did give — and prompt organizers to set the bar much higher for year two, slated for Dec. 12.
Indeed, the goal for 2013 is $2 million, said Leutz, adding that there are now more than 350 nonprofits and schools registered for the program, and newcomers and returning participants alike are looking forward to what promises to be an exciting day.
“When we raised $1 million in the first year of Valley Gives, it stunned everyone,” Leutz said, noting that the local effort surpassed the performance of a similar initiative in Boston. “The online-giving growth rate is growing twice as fast as traditional giving. This is an efficient and effective way to raise a large amount of money in a small amount of time.”
But Valley Gives is about much more than raising money, said Al Griggs, former chairman of the Community Foundation and, along with Springfield attorney Paul Doherty, an architect of the initiative.
“The idea is to allow people who are philanthropic to do what they naturally do, and that is to support organizations up and down the Valley,” said Griggs, adding that there is another component to the event. “Thousands of people across the Valley work for nonprofits, and we wanted to celebrate that.”
And the first Valley Gives was very much a celebration — in many respects, said Leutz.
A number of organizations created a party-like atmosphere around Valley Gives last year, she noted. One organization, Country Dance and Song Society, busted out a flash mob at Thornes Marketplace in Northampton. The Jewish Federation of Western Massachusetts brought a dunk tank.
Leutz said a Valley Gives wrap party will be held on Dec. 12 at the Galaxy restaurant in Easthampton.
“We’ll watch the total come in,” she said. “Valley Gives is a festival of generosity, and that’s what I love about it. This is truly a community event.”
For this issue, which also features the annual BusinessWest Giving Guide, we take an in-depth look at this community event and how it has enormous potential to become a powerful Western Mass. tradition.

The Power of Giving
Griggs said it was reports of the generosity of billionaires Warren Buffett and Bill Gates that prompted he and Doherty to start thinking of ways to increase philanthropic giving in the Pioneer Valley.
So two years ago, they sought the advice of the Community Foundation of Western Mass. to find ways to create opportunities for fund-raising in the area. The foundation took what Griggs calls their “germ of an idea” and did some research and came across an effort created in Minnesota called Give to the Max Day, a one-day online fund-raising event for nonprofits and schools that has spread to other parts of the country, including Boston and Miami.
The concept sounded like it could be successfully adapted to the Pioneer Valley, so the foundation decided to create a local event based on the Minnesota model and call it Valley Gives. The idea was to unite residents of Franklin, Hampshire, and Hampden counties in one massive online fund-raising effort for nonprofits up and down the Pioneer Valley.
To bolster the effort, the foundation recruited the Beveridge Family Foundation, the Irene E. and George A. Davis Foundation, the Jewish Endowment Foundation, the Jewish Federation of Western Mass., United Way of Franklin County, United Way of Hampshire County, United Way of Pioneer Valley, and the Women’s Fund of Western Massachusetts as partners.
Donations during Valley Gives are pledged entirely online. The event goes on for 24 hours, beginning at midnight and ending at 11:59 p.m. Donors can log onto valleygivesday.org to find the nonprofit they want to give to and make a donation.
Valley Gives donors don’t have to be a Gates or a Buffett to make a pledge. On the contrary, the minimum donation is $10, and there is no maximum.
Nonprofits registered to participate in Valley Gives in August and September, and went through training in October and November. Much of the training was focused on effective methods of marketing, with a major emphasis on social media and other online strategies like Facebook, Twitter, YouTube, blogging, and e-mail newsletters.
“A large percentage of nonprofits were not on social media, and there were others that were on social media, but didn’t do much with it,” Leutz said. “We convinced them to take social media to a new level. We’re creating the environment for nonprofits to market themselves successfully. For many of the nonprofits, they saw capacity in places that they did not see before. New opportunities were created for them. A lot of donors were new.”
Besides the pledges rolling in during Valley Gives, nonprofits will be eligible to win leaderboard prizes of up to $10,000 for being a top fund-raiser, as well as a Golden Ticket or Power Hour, which are prizes of up to $1,200 throughout the day.
Lisa Oram, marketing and communications director at Snow Farm: the New England Craft Program in Williamsburg, remembers the organization’s staff huddled around computers watching the money come in during the 2012 Valley Gives event, and posting on Facebook and Twitter throughout the day to keep momentum going.
“People were very engaged and enthusiastic,” Oram said. “I felt humbled by the amount of generosity of people across the Valley toward all of the organizations that participated. The day became all about Valley Gives.”
The team members at Snow Farm were floored when they won a prize worth $10,000 last year, especially since they first thought it was for $1,000. Last year, the organization raised $22,000 which paid for new computers for the organization’s digital photo lab and scholarships for its high-school program.
Other nonprofits that participated in last year’s event are looking forward to being involved again this year.
Safe Passage, the Northampton-based organization that addresses issues of domestic violence, was among the nonprofits that participated in Valley Gives in 2012. Marianne Winters, executive director of the organization, said money raised was used for programs to support children who are exposed to domestic violence, and to help fund its legal program in probate court.
This year, money will go toward a prevention initiative called Say Something, which offers training, education, and other skills for dealing with a potentially abusive situation.
“We have startup costs and need to generate publicity and other ways to get people involved,” Winters said.
Nonprofits that are first-time participants in Valley Gives are also eagerly awaiting the stroke of midnight on Dec. 12.
Team Jessica Inc. was formed in 2009 in honor of Jessica Martins of Belchertown, who died at 19 as a result of complications from Rett Syndrome, a neurodevelopmental disorder.
Although Martins was confined to a wheelchair, she was as active as possible, going to school dances, playgrounds, and riding horses. Team Jessica is striving to raise money to build a playground to be named after Jessica on 13,367 square feet of land at the Belchertown school complex.
“We want to build a new playground that’s 100% handicapped-accessible, with a poured rubber surface,” said Deanna Roux, the organization’s spokesperson. “The playground will cost $400,000, and we’ve raised $207,500 so far over the last three years through different events.”
Team Jessica wanted to be involved with Valley Gives last year, but had not achieved 501(c)3 charitable nonprofit status in time to do so.
Team Jessica is hoping to raise $10,000 through the Valley Gives event. Besides raising money to build the playground, Vicky Martins Auffrey, Jessica’s mother, hopes to continue developing handicapped-accessible projects.
On the day of Valley Gives, Team Jessica street teams will visit two Belchertown restaurants and will have postcards printed with a QR code that can be scanned by a smartphone to make a donation, as well as a computer to make a pledge.
“We’re hoping to expand our reach,” Roux said. “We heard all of the success stories from last year’s Valley Gives and felt we really needed to be involved. We signed up the minute it opened up.”

The Bottom Line
After signing on to participate in Valley Gives, Roux and Patti Thornton, Team Jessica Inc.’s grant writer, attended the training sessions and participated in a webinar to prepare them for the event. Roux said they learned a lot of valuable information about how to market themselves to get the word out to potential donors of their involvement with Valley Gives.
Team Jessica learned the importance of developing an e-mail newsletter, as well as posting on Twitter and other social media, and being more active online in general.
“I’m looking forward to 12/12/13,” Roux said. “All of the stuff you do beforehand matters. I’m excited, but nervous. We’ll see right away how dollars are moving.”
And with that, she spoke for everyone looking ahead to the second edition of Valley Gives. 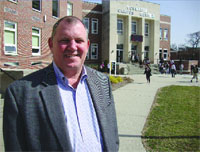