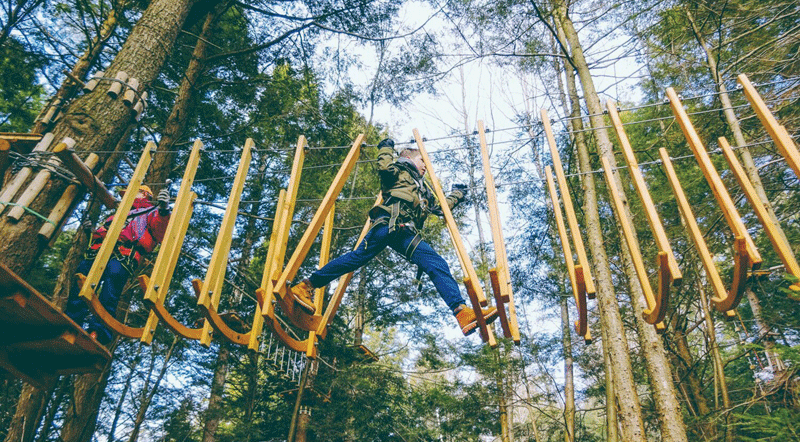 There are eight courses in Ramblewild’s aerial adventure park for people to choose from, accommodating beginners to experts.

Few people ever get the opportunity to play high in the treetops.

But at Ramblewild LLC in Lanesborough, children and adults of all ages and abilities can swing through the forest like Tarzan, climb rope ladders, and encounter a series of challenging obstacles as they make their way through a series of 15 platforms connected by bridge elements set 15 to 50 feet high in the treetops.

Program Director and Operations Manager Luke Bloom says Ramblewild’s aerial adventure park is the largest of its kind in North America.
“When we built this, our goal was to reintroduce kids to nature in an exciting way,” he told BusinessWest. “Technology has become an appendage that consumes so much of everyone’s life, and this is the first generation of children who will have to seek out the solitude of nature on their own. We want to get them excited about being stewards of the forest, and they can see the beauty and relaxation it can provide while they’re here; there is so much that can be learned from the forest.”

The focal point of the park is a central platform rising 15 feet from the ground called the Hub, which is the starting point for eight different adventure courses or trails that meander from tree to tree at various heights throughout the forest.

“We have something for everyone,” said Bloom, noting, however, that children must be at least 7 years old and 55 inches tall to enter the park. “We’re set up like a ski area and have two courses for beginners, two for intermediates, two advanced trails, and two for experts.”

They include elements that range from high wires to ziplines, balancing logs, rope ladders, cargo nets, suspended bridges, and more; four of the courses cross a ravine via ziplines that swing people 100 feet above its bottom.

Although the aerial park is decidedly the crown jewel of Ramblewild, it is far more than a place to have fun. Feronia Forests owns the 1,450-acre property, and the company has chosen not to follow the typical approach taken by most foresting companies, which involves evaluating the trees as a commodity and selling their wood for profit.

Bloom says there are no plans to harvest the trees at Ramblewild for the next 30 to 50 years, although some may be taken down to maintain the overall health of the forest. Instead, four avenues are being used to make the land profitable while sustaining its natural beauty. 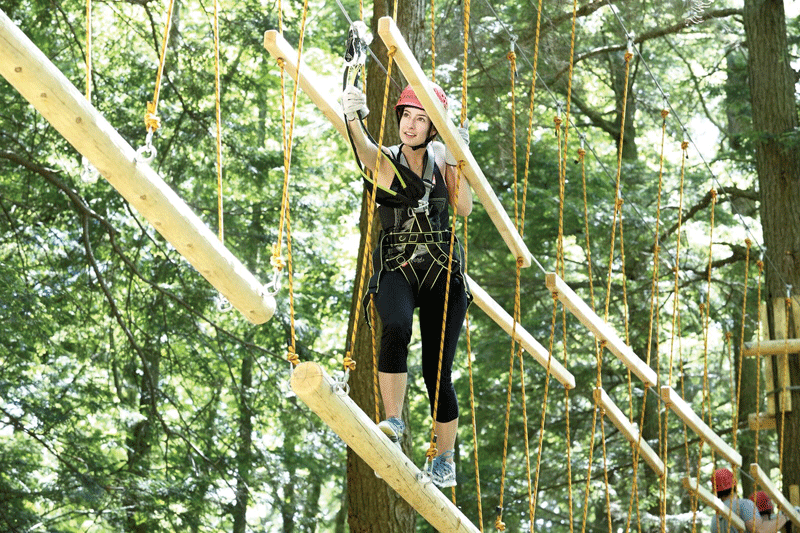 Some platforms in the treetops are joined together by suspended bridges.

The first avenue is recreation, which is provided at the aerial adventure park and through an extensive network of hiking and snowshoeing nature trails that begin at the lodge and wind their way over Brodie Mountain, showcasing a wide variety of flora and fauna.

The second is education; many schools bring classes to Ramblewild to get hands-on lessons about science and history. Their programs are aligned with national STEM (science, technology, engineering and math) applications as well as the Massachusetts Common Core state standards for grades 3 to 12.

“We like to look at this as one of the largest living laboratories in the Northeast. Most classes are already studying what they come here for, and our programs are custom-designed for each teacher,” Bloom said. A 120-acre sugar forest with 6,000 taps provides the raw material for a commercial maple-syrup business, which is the third avenue of business and economic development, while the fourth is providing jobs and vocational opportunities for people in the area.

“These programs all support each other and make Ramblewild a workable, functional place where we can turn a profit without cutting down trees,” Bloom told BusinessWest, adding that wind turbines at the top of Brodie Mountain are a visible display of the power that can be generated from natural resources and also provide lessons in renewable energy.

The philosophy and concepts employed at Ramblewild were the brainchild of Paolo Cugnasca and his daughter, Valentina Cugnasca, who are the principal investors.

“When Valentina was a student at the University of San Francisco she wrote a doctoral thesis titled ‘Tree Hugging Capitalism,’” Bloom said, explaining that the ideas that make Ramblewild successful stem from her work.

Education is a critical component, and it’s based on silviculture, defined as the art and science of controlling the establishment, growth, composition, health, and quality of forests and woodlands to meet the diverse needs and values of landowners and society on a sustainable basis.

“When school and camp groups come here, we explain how we manage our open space compared to other foresting companies, how we get the most of the forest with the least amount of damage,” Bloom noted.

Classroom lessons typically last six hours. A physics class could study the idea of bodies in motion by using the ziplines, and a fifth-grade teacher could use the course for a geology lesson because glacial scarring can be seen from the top of the mountain. There are also opportunities for natural-history lessons, and Bloom said a high-school English teacher brought a class to Ramblewild to inspire students to write poetry.

“We have a stage in the adventure park and had a high school collaborate with area jazz musicians to conduct free concerts in the forest,” Bloom noted. “The potential here is literally unlimited in terms of applicable lessons, and we make things as easy as possible for teachers.” 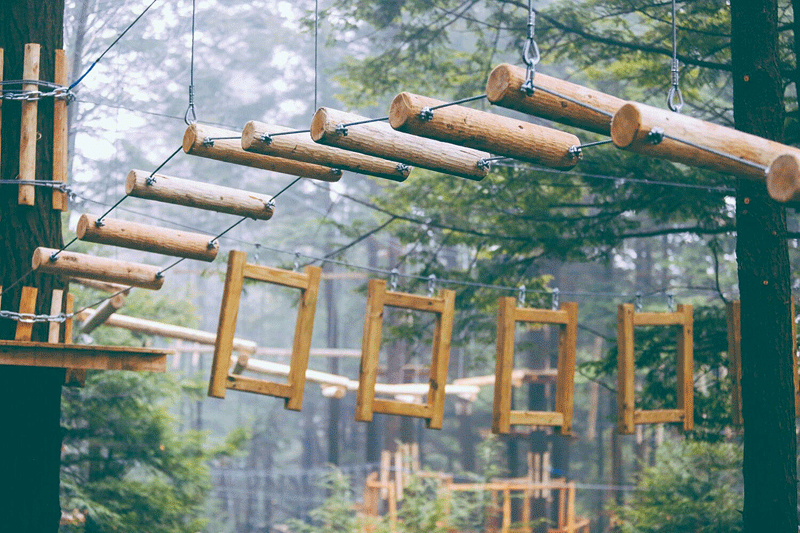 For example, a third-grade class might visit Ramblewild during maple-sugaring season and learn how much science is involved in tapping a maple tree, as well as how to care for it and what takes place from the root structure up to the cellular level.

“The students feel the tree, put a tap in it, and are able to taste the sap, which is the tree’s lifeblood,” Bloom said. “It’s like clear water, and we talk about the evaporation process needed to turn it into maple syrup, which many people don’t know about; they think it comes out of the tree as sweetened syrup.

“When we say we’re the largest living laboratory, what we mean is that the forest is a place to hammer home lessons taught inside the classroom,” he continued. “It is infinitely more powerful when you can see something, touch it, smell it, and taste it. Studies have shown that people only retain 10% of what they hear, 50% of what they see, and 90% of what they do, and we operate under that onus: we want people outside seeing, tasting, smelling, and feeling the forest.”

Bloom explained that Hillrock is one of few in the country that produces whiskey from farm to bottle on the premises. It ages its whiskey in white oak barrels to turn it into bourbon, and Ramblewild purchases the used barrels, fills them with maple syrup, and ages it for 14 weeks before filtering it into bottles.

A group of campers from Smith College recently visited Ramblewild, and after learning about its full forestry program, they went for a hike in the sugar bush and were taught about that operation.

Berkshire Wind Co-op’s wind power project on top of Brodie Mountain, which consists of 13 wind turbines located on Ramblewild propery, is another place where students of all ages can experience nature in a unique way.

“We take them to a place where they can stand underneath a 320-foot tall wind turbine and talk about how it works and how kinetic energy is turned into electric energy, which is then returned to the grid for use by the consumer,” Bloom said. “It’s one thing to learn about it from a book and another to stand beneath one of these giants and see it firsthand. It’s pretty incredible.”

Classes have lunch at Ramblewild, and afternoons are spent at the aerial adventure park, playing in the treetops.

There is also a nonprofit division of the corporation called Feronia Forward whose sole purpose is to provide funding to allow more schools and students to participate in Ramblewild’s programs.

“A percentage of the price of every bottle of maple syrup we sell goes into the fund. The proceeds are often matched by investors, and over the last two years we have given more than $100,000 to school groups,” Bloom noted.

It took four years for Ramblewild to become operational: three to procure the land and obtain the necessary permits, and a year to build the aerial adventure park.

“We’re in our third season and expect to make a profit this year. We stay very busy from June until after Columbus Day and expect to get about 20,000 visitors this year,” Bloom said.

The operation has five full-time employees but adds up to 40 additional staff during their busy season, which fulfills the goal of providing vocational opportunities for people living within a 100-mile radius.

In addition, every product used at Ramblewild comes from local businesses, including the raw materials needed to create the buildings and the aerial adventure park.

Ramblewild has been named a ‘B corporation’ for the past four years, which is an elite recognition given to companies that use business for the higher purpose of solving society’s most challenging problems. Only a handful of firms have earned the environmental distinction, as the standards are very stringent.

“Our ultimate goal is to be a place where families, teachers, and anyone interested in the forest can come, a place where they can disconnect from technology and reconnect with family and friends in an effort to educate the next generation about stewardship of the forest,” Bloom said. “We want them to claim responsibility for the environment, as if they don’t, no one else will. It’s our sole purpose, and we are proud of what we have created.”

That would be another world, high in the treetops and on top of Brodie Mountain, where it’s easy to forget the pressures of the modern world and find the extraordinary peace that nature can provide. 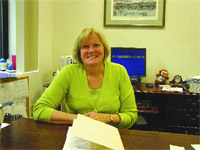