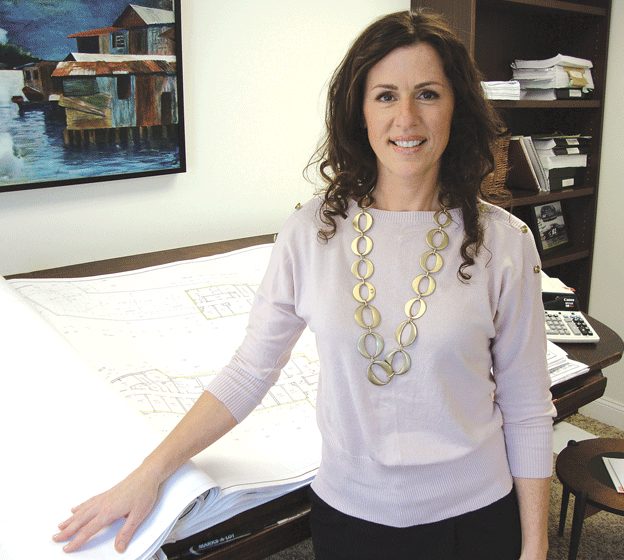 Chabot & Burnett Builds on Its Legacy in Masonry Construction 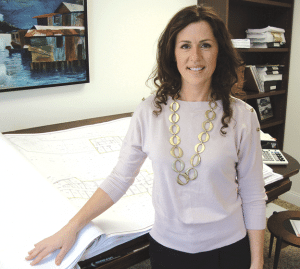 Kristin Capell says that, in many ways, the construction industry is more complex than it used to be, from added paperwork and compliance to safety measures and LEED certification.

Current president Kristin Capell remembered the first days of her tenure at the company her father and his business partner built, Chabot & Burnett Construction.
“When I got started 16 years ago, my father threw me into it and taught me everything,” she told BusinessWest. “I’d sit in a back room and learn how to estimate masonry. And dad had a grand plan. He and Dan knew when they wanted to retire, because they worked so hard their entire lives.”
Joe Chabot, her father, and Dan Burnett had started the company that bears their name in 1971, when both men were still in their teen years.
“They just did everything together from the start,” said Kristin. “They raced motorcycles, motocross, rode planes, but they were also workaholics, working 12-hour days.”
In an industry dominated by male ownership, Capell said that it is a mark of pride to be at the helm of a construction firm these days, especially one that has erected scores of brick and stone buildings, with project costs totaling in the tens of millions of dollars. But she is quick to point out that, while she is the president, two other partners have joined her in both ownership and leadership, and continue to help lay the foundation for of the area’s premier masonry-construction firms. Jim Carrier, current vice president, and Dan Burnett Jr. are both given equal credit for a business that enters its fifth decade with a rock-solid future before it.
While the economy has hit this niche of the construction sector as hard as every other trade, there have been strong signs of life for this style of structure that is built to last. The brick and stone edifices on college campuses have been a lifeline for this firm, Capell said. “For me in my career, higher education has been about 90% of our projects.”
During that time, the collective wisdom of the men who started the firm helped give Capell and her co-owners a good template for riding out the recession. While this sluggish economy dovetailed with the final days of Chabot and Burnett’s final years of succession, the pair offered advice as solid as a brick wall.
“But in comparison to other recessions, to them, this one was really ugly,” Capell noted. “It was unfortunate that it happened right at the year of their retirement. That big celebration of 40 years just wasn’t as celebratory as we might like.”
She and her partners took over the firm fully in April 2011, and with that lull just behind her, she said 2012 has a good book of work ahead, and that’s generating optimism.
When asked what her predecessors, enjoying their retirement in Florida for the winter, think about this year with $13 million of work on the books, she simply said, “they haven’t once even thought about coming back up to help out. If they were even slightly concerned at all, they would never have left.”

From the Ground Up
Capell said that masonry, and entrepreneurial spirit, were always in her father’s blood.
“My grandfather was a mason tender, and thus my father knew the trade from him,” she explained.
Chabot and Burnett were friends from high school, where they both attended Springfield Tech. Both men had taken jobs with construction firms as teens, and quickly proved themselves to be able masons.
“But they wanted to do it for themselves,” Capell said. “They knew each others’ skills, and they started originally by building chimneys to raise capital and to eventually support their payroll.”
When asked how two 19-year-olds could successfully build themselves a masonry-construction operation, Capell said solid word-of-mouth referrals built the business and enabled it to enjoy steady growth.
“All of the smaller general contractors in this area, Berneche, Fontaine …  they just got to know the two from working with them, and took a risk and hired them — and then realized how good they were,” she continued. After one initial job which the two leveraged into a bank loan to create the company, the rest is history.
“There are probably five or six buildings in just about every town around here that we’ve built — from public schools to banks, tons of work at Smith College and Mount Holyoke College. We built most of the dorms at Western New England University.”
Amherst College is the site of many Chabot & Burnett projects, both administrative and residential, including a dormitory built entirely of granite. “For a while right before the recession, in 2006, 2007, it was a building boom. At the college, we just hopped from one building to the next,” she explained.
UMass Amherst has been a source of significant work for the company as well. Over the past decade, Chabot & Burnett has built the North Apartments, a five-story, four-building student residential complex; the Studio Art building designed by Graham Gund; and the first Integrated Science Building.
Looking back — and ahead — Capell acknowledged that the industry has changed from those early days.
“All the paperwork and all the compliance, safety, LEED … this is a totally different landscape from when Chabot and Burnett were building,” she explained. “They could just go out and build a good building.”

Ton of Bricks
Her father and his partner had put into effect a 10-year succession plan for Capell, Carrier, and Burnett Jr. to eventually take over the firm. During that time, the pair were actively involved in all facets of the company — toward the end, during the recession, even helping out with no compensation.
“They went out into the field again, too,” she said. “Here they were, at the age of 65, coming back into the office at the end of the day all scratched up. Anything they could do to help.”
During their own time, the two had seen their own share of economic expansions and deep recessions. And to Capell and her partners, they offered their own strategic advice.
“‘Put your head down,’ they would say,” she remembered. “‘Trim as much as you can while still keeping the business competitively strong.’ And I did. I got rid of cleaning people, kept a small workforce going.
“Also, I bid everything,” she continued. “I was bidding $500 projects. We did some of the tornado work, just to make sure there was a revenue stream continuing. I went after everything. We did go out of our traditional geographic range, taking a $4 million job in Worcester. Big jobs like that were few and far between. We looked at it, I knew where we had to be with numbers, and I knew I had to take something like that on. Maybe we didn’t make as much money as we historically had, back in the good days. But that’s what the recession did to everyone.”
Overall, Capell said, thanks to the lessons and inspiration provided by her father and Burnett, the company has done more than survive the recession. Indeed, it is on fairly solid footing, and with a number of jobs in progress and in the pipeline.
The new Easthampton High School, a LEED-certified structure, is on the books, and UMass Amherst continues to be a solid client; the firm is building the second of the new science buildings, along with the new UMass Honors College dormitories. Much like the expedited timeline of the North Apartments, built in an-unheard of nine months, this one has a ribbon-cutting date of Dec. 1. “And we haven’t started it yet,” she said with a smile.

Sunshine State
Down in Florida, lifelong friends Chabot and Burnett are now part of the company’s proud history, Capell said, and she’s pleased to report that this first full year of their retirement has been blissfully uneventful for them, from a business perspective.
“Since we took over, they have left us alone,” she said — perhaps the best compliment from the founders of a company who were wholly engaged in the business since they were young men.
“If I ever have a question, of course they will be happy to help,” she continued. Otherwise, “they don’t worry too much about what we’re doing here. They have confidence in us. But this will always their baby, and it was emotional for them in their final year to let go.
“They both live near each other down there,” she added. “They play golf and see each other almost every day. They’re still the best of friends.”
For the new leadership team, Capell and her partners take pride in carrying on the legacy created by the two men.
“I am very proud of the reputation we have,” she said. “When we’re hired on a job, they’re happy to have us. That’s right across the board from the architects to construction managers to the other trades. We offer a professional business, getting things done fast.
“My father and Danny’s reputations preceded them, and that is carried over to us now,” she added. “A company knows that, when they hire us, there’s a history of honesty, of standing behind everything we do, and that’s what I’m most proud of.” 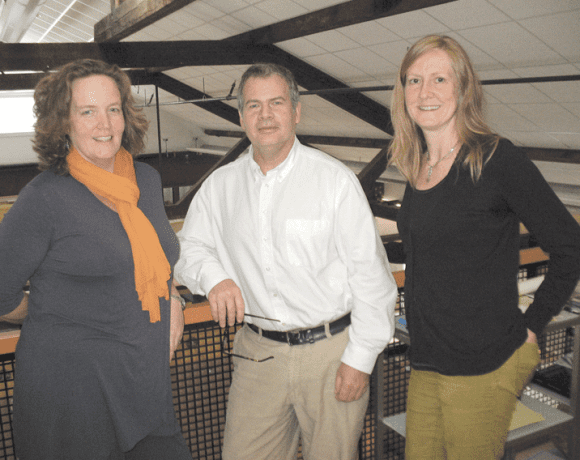