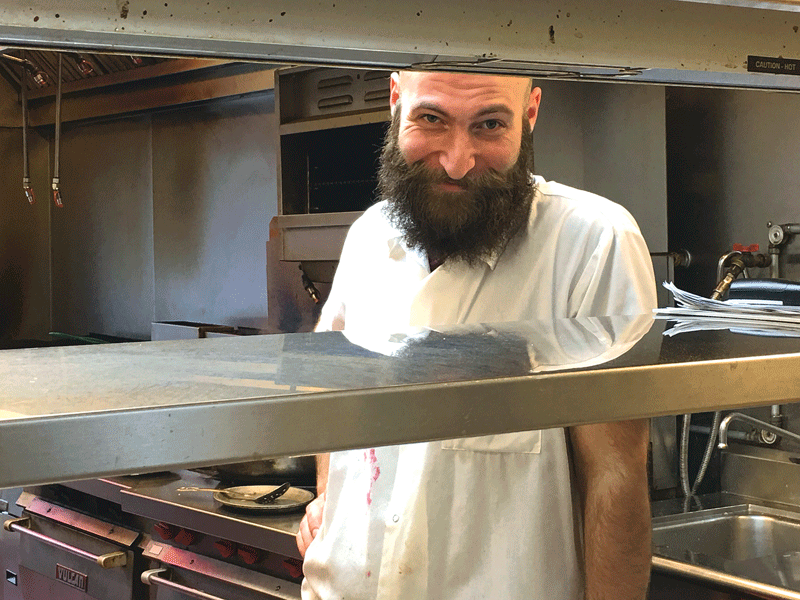 Sierra Grille sous chef David Moses has his eye on pleasing the customer.

We’ve all been out to dinner with that person: you know, the one who pores over a restaurant’s menu and then tries to reinvent it on the spot.

“I’d like the tuna,” your companion might say, “but instead of the baked potato you have listed here, I’ll have mac and cheese, and rather than a salad, I’ll go with butternut squash.”

Let’s face it; the creative orderer can be a waitstaff’s nightmare. It’s why you’ll see the words “no substitutions, please” on so many menus.

But not at Sierra Grille, where diners are invited to build their meals at will, from a menu that features a dozen entrées, 18 ‘small bites,’ 10 special sauces, seven choices of salads and paninis, and nine sugary desserts — and that’s not counting the sliders, soups, and daily specials.

Say you’re craving a blood-red tenderloin steak, but you aren’t a meat-and-potatoes fan, per se, and would prefer a double order of locally grown asparagus in place of the more traditional spuds. No problem. Or, maybe it’s meatless Monday, and your mouth is screwed up for seitan or tempeh, cooked on a veggie-only grill, and paired with royal basmati rice and grilled vegetables. Sierra Grille has you covered.

This place is a mix-and-matcher’s delight.

“I call it an accommodating cuisine,” said Sierra Grille owner O’Brian Tomalin, in a recent interview at his establishment at 41 Strong Ave. in Northampton. “Did you ever go to a barbecue, where you bring a six-pack, which you add to the collection of six-packs, and then you bring a side dish, and it lands on a table, and there’s something on the grill? You take what you want from the grill, you have this great selection of sides to choose from, and there’s a selection of beer and wine. This is that kind of experience, extrapolated to a restaurant. Everybody can find something they like here, and that’s what I strive for.”

Tomalin, 49, opened Sierra Grille in 2006 after working in restaurants and breweries in his home state of Maine and, later, as the first bar manager at Amherst Brewing Co. And while he says he’d never call himself a chef, he does know a thing or two about cooking. As the youngest of nine children, four boys and five girls, he learned to make himself an egg for breakfast by the time he was 6, out of necessity.

By the way, one of those nine is actress Susan Sarandon, a fellow foodie who has eaten at her brother’s establishment on several occasions, surprising diners as she’s supped on the likes of hanger steak and scallops. After a recent visit, she asked Tomalin what he had used for a marinade on the scallops. “I said, ‘nothing. They’re just beautiful, fresh scallops. A little white wine and a tiny bit of butter.’ She said they were incredible.”

For this issue and the magazine’s annual Restaurant Guide, BusinessWest visited Sierra Grille and talked at length with Tomalin about his accommodating cuisine and why it resonates with his customers.

On a recent afternoon, just before the day’s 3 p.m. opening, Tomalin was seated at a two-top high table in the vintage bar area of the restaurant, dressed casually in a short-sleeved shirt, cargo shorts, and a baseball cap. Light poured into the wood-paneled room, its effects dappled in spots as it shone through stained glass embedded at the top of two grand, arched windows.

The mahogany bar top dates from 1947, and while Tomalin had it refurbished about five years ago, he said, nothing was changed — other than removing about 50 cigarette burns that harkened back to the days when smoking was allowed in eating and drinking establishments.

The building was constructed in 1880 as a hotel for railroad passengers who arrived or departed from the city’s train station, just across the street. In the 1980s and ’90s, as the Baystate Hotel, it was a popular venue for live music.

As an ode to that history, Tomalin recently revamped a long-defunct program, “Reanimate the Bay State,” which features live music every Thursday, starting at 10 p.m., with a cover charge of $3. 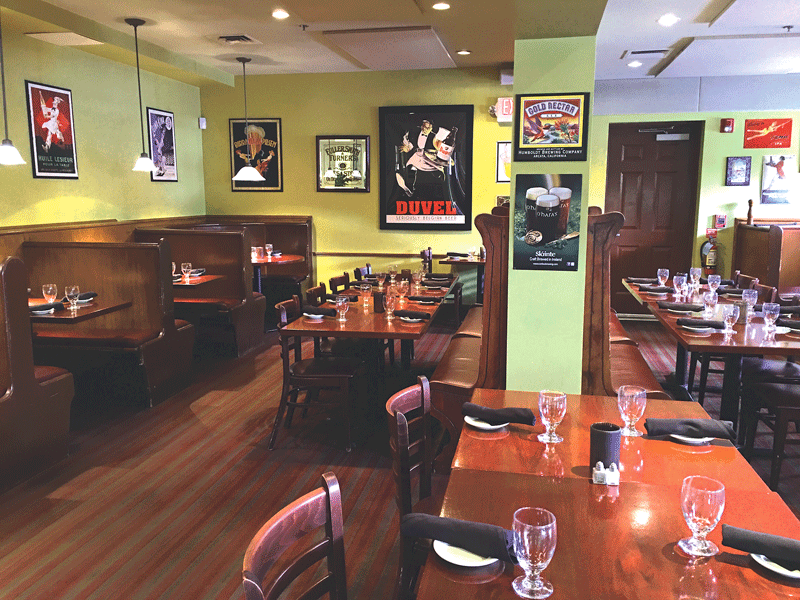 “The bands — most of them local — get 100% of the cover charge, and they get beers while they play,” Tomalin said. “It’s really exciting.” It has also boosted business, with the bar doing up to an additional $1,000 in sales on Thursday nights.

Tomalin leases the ground-floor space from the building’s owners, brothers Antonio and Efthimios Rizos, who also own the Opa Opa Steakhouse and Brewery in Southampton, and business partners Volkan Polatol and Petros Mirisis. The quartet runs two other restaurants in the building: Mulino’s Trattoria on the second floor, and Bishop’s Lounge on the third.

Sierra Grille is open seven days a week, from 3 p.m. to midnight, but never on holidays (it’s a policy, he says, that his staff appreciates. “The restaurant business is pretty flaky; whatever makes you a whole person — it makes it better for us.”)

An early/late menu that includes everything but the entrées is available from 3 to 5 p.m., and from 10 p.m. to closing.

In addition to the array of culinary choices, the restaurant features 24 beers on tap, as well as a selection of bottled beers. Tomalin is also the owner of Building 8 Brewery in Northampton, and he always has a couple of those brews on tap at Sierra Grille. He also serves selections from other local brewers, including Green River Ambrosia, a mead made with honey from local bees that comes from the Artisan Beverage Cooperative in Greenfield, as well beers from Germany and Belgium and elsewhere in the U.S.

“Berkshire Brewing Co. is always on; we pour their Steel Rail and their Coffeehouse Porter,” he noted. They also go through a keg a week of Allagash White, from the Allagash Brewing Co. in Maine, often using it in recipes. The hoppier beers are customer favorites.

Most of his wines are available for purchase by the glass, and are priced in the mid-range (“I call the selection ‘Wine 101’”), and though there are no obvious favorites, customers invariably switch between reds and whites with the seasons.

The biggest change for imbibers is Sierra Grille’s full liquor license, awarded by the state in January after an 18-month-long process of meetings, applications, and more meetings. Tomalin is in the final stages of designing a stable of craft cocktails, with selections from boutique distillers, which will be priced in the $8 to $12 range.

“You won’t be able to get a Jack and Coke here,” he explained. “We like supporting the little guys.”

Tomalin says he’s committed to supporting smaller growers as well, and buys his food locally, or regionally, as much as possible.

“We can get wahoo from Hawaii, and it’ll be here the day after it’s caught, but do you think I want my fish flying on a plane, blasting stuff into the atmosphere? No.”

Seafood comes from the coasts of Massachusetts and Maine; burger meat comes from local sources; and, when they’re in season, he gets his veggies at local farms, like Queen’s Greens in Amherst, as well as from area foragers. During the growing season, he often stops by Northampton’s farmer’s markets to see if anything strikes his fancy. Those items might just turn up in that day’s specials.

Tomalin says his customers appreciate the local freshness. “We just switched over to local asparagus, and we’ve doubled what we’ve been selling.”

With an eye toward environmental sustainability, the restaurant also recycles plastic, glass, tin, and even cooking oil. “Until recently, an employee was using the oil in his car,” Tomalin said.

The restaurant also supports a number of causes dear to Tomalin’s heart (during the last presidential primary, he held a fund-raiser for Bernie Sanders, where he read a statement of support from Sarandon, a longtime political activist), as well as local nonprofit organizations. This month, for example, the restaurant is running a “Half Pints for Half Pints” campaign: half the cost of each pint of beer sold on Mondays is donated to the Cooley Dickinson Hospital’s “Cooley Cares for Kids” fund-raiser.

“The benefits stuff is pretty great,” he said. “It is nice to do something, have an issue, accomplish that, get it done, and see it work.”

Even though Tomalin quips that the restaurant business “would be great if it weren’t for the customers,” he says he’s committed to satisfying diners at his busy establishment.

On an average Saturday, the restaurant serves between 225 and 275 meals; on a bigger weekend, like at college-graduation time, the number rises to about 300.

“People always tout our consistency,“ Tomalin said. “I look at cuisines and see what’s trending, but I don’t want to be trendy. We’re still evolving a bit, but we do what we do. As the saying goes, ‘if it ain’t broke, don’t fix it.’”