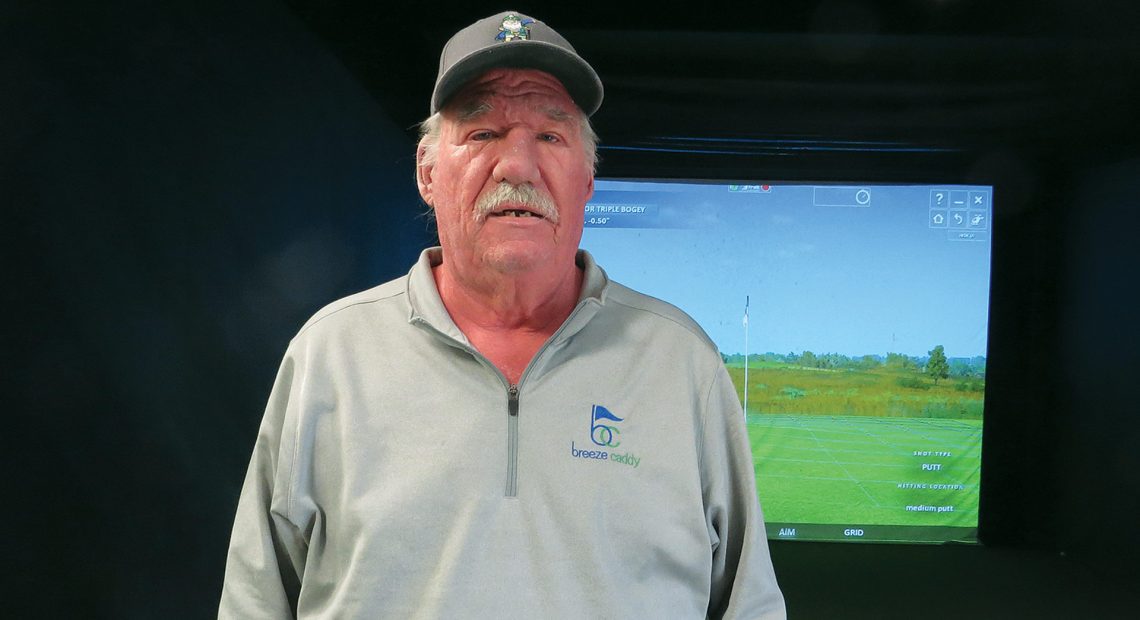 Simulators Have Become a Solid Addition to the Business of Golf

Not Quite the Real Thing 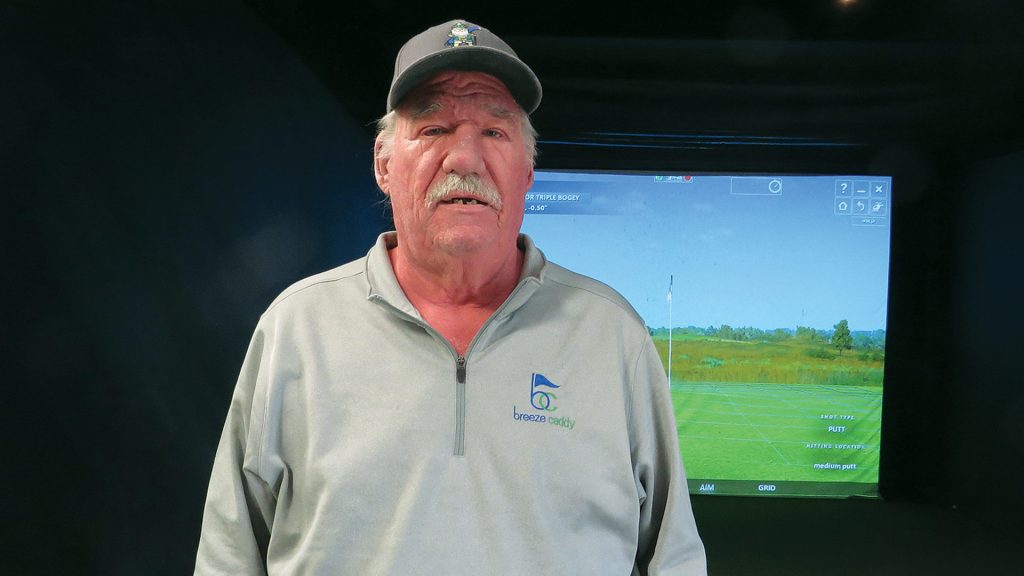 Jay Nomakeo, seen here at a simulator he rents out at the Hadley Golf Center, says simulation is booming, and he is confident that current growth patterns will continue.

It might be early April, but Jay Nomakeo is already looking forward to November.

That’s because he’s making serious investments — and some inroads — in an emerging subsector of the broad golf business — simulation.

Nomakeo, a serial golf entrepreneur, if you will, is renting space at the Hadley Golf Center, a recreational facility that boasts everything from a driving range to batting cages to a maze, where he operates four simulators that are rented out to individuals, small groups, and even high school and college golf teams for everything from practicing to playing Pebble Beach — sort of.

The simulators provide a way for golfers to keep at their game during the winter months, and for facilities like the Hadley Golf Center, as well as area courses and golf shops, to earn needed revenue during the slow season.

Many area private and semi-private clubs now boast simulators, which provide additional revenue in some cases, but, more importantly, another way to provide value to members who have a number of choices when it comes to which club to join. Meanwhile, a golf-simulation facility called Top Golf has become part of the retail lineup at MGM Springfield, although the facility closed down during COVID and has yet to reopen.

It’s still an emerging business, but it’s catching on, said Nomakeo, noting that bookings were very solid this past winter, and time was often hard to secure, with the simulators in Hadley rented out to individuals, leagues, students, and faculty from nearby colleges, groups from area country clubs, and more.

“All winter long … we don’t lay anyone off because we generate enough revenue with the simulators to cover our payroll.”

“During the winter, it’s crazy,” he told BusinessWest, adding that most enthusiasts are playing courses, with Pebble Beach and St. Andrews the two favorites. “We sold out every weekend. There was one weekend where we were sold out, but I still got 21 calls during one day looking for times. Simulated golf has just exploded; I’ve seen reports showing that it’s growing 45% a year.”

“We have a mixed bag — we have guys who just want to practice, so we sell a practice session for the year, where they’ll come in for half-hours at a time; they’ll hit their whole bag of clubs and get their yardages,” he said. “And we have guys who come in who like to play 18 holes with their buddies. We have college teams that rent them all the time; some of their bigger schools have their own, but the smaller ones do not, so they come in and rent ours.

“They’re booked pretty solid — Fridays, Saturdays, and Sundays, you need a week to 10 days out to book them,” he went on. “But we noticed this winter that our simulators have been sold every day, every hour, almost every minute. All winter long … we don’t lay anyone off because we generate enough revenue with the simulators to cover our payroll.”

DiRico’s store has several simulators, used for practice, playing any of 18 different courses, and also for the fitting of clubs, an additional use that puts the simulators to work for more of the year, which makes his operation different from most others. 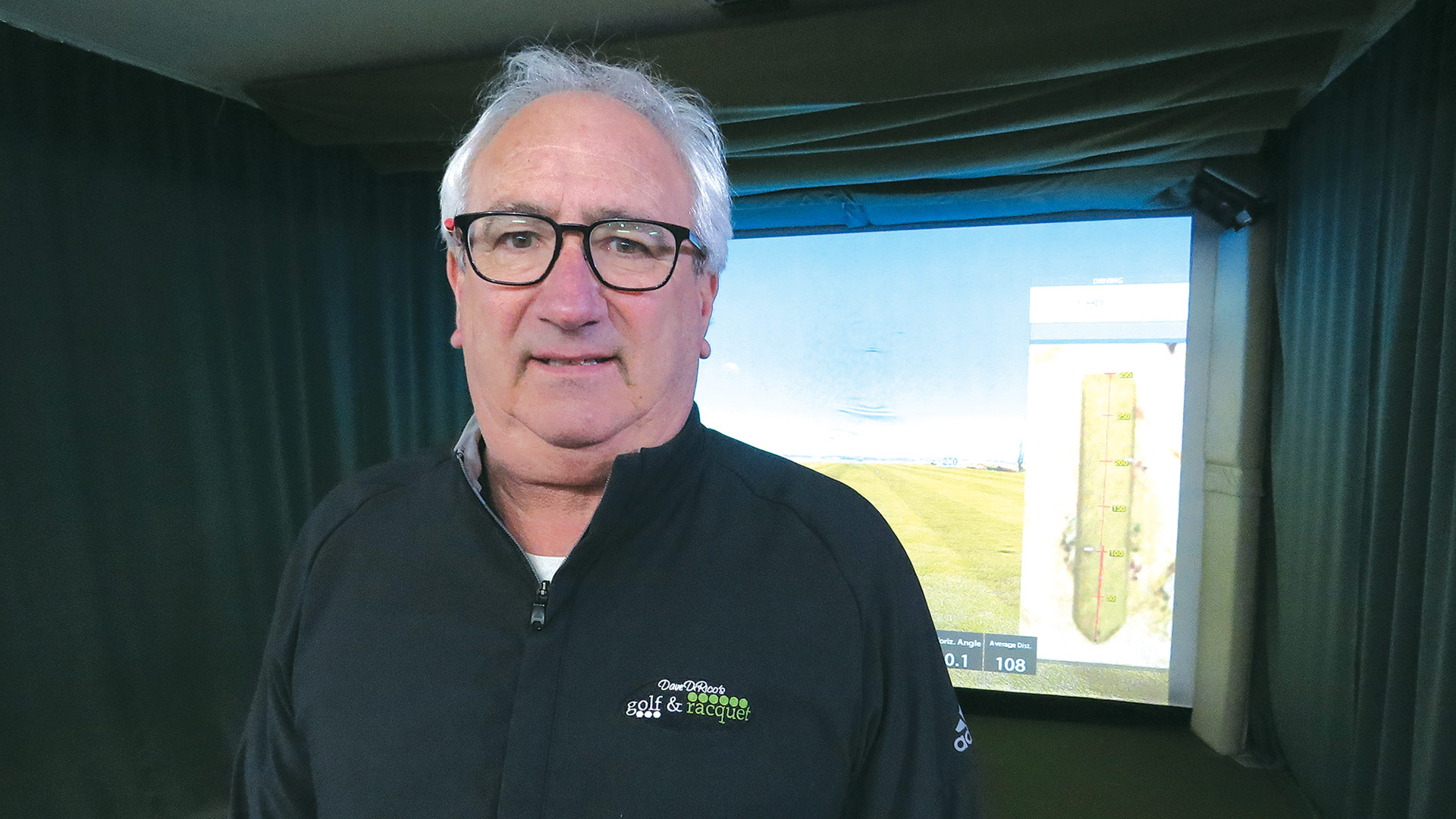 Dave DiRico says his simulators are used for everything from playing courses like Pebble Beach to getting fitted for new clubs.

This advantage is important, he said, because simulators, while an important addition to the game and the business, have their limitations, especially when it comes to the calendar.

Indeed, whenever they have the choice, golfers will prefer to practice and play outdoors, which means Nomakeo and others are heading into what is definitely their slow season.

“Some people will still use them during the warmer months, but, for the most part, once April 1 hits and you can see green grass on the golf course, people are going outdoors; they’re not staying indoors,” DiRico said. “The business dries up very quickly.”

“With the way we’re seeing these trends with new golfers coming in and others coming back to the game, we want to make sure we’re not boxing them out or potentially losing them again. Ten to 15 years ago, we saw some similar trends, when golf was at its peak and we were getting new golfers. Prices were going up, and we lost some of those fringe golfers.”

Still, despite these obvious limitations, Nomakeo and others are seeing solid opportunities and enough months of business to warrant additional investments.

Indeed, Nomakeo is partnering with others to bring four new simulators to the MCU Center, a multi-sport facility in Agawam located in a old department store. There are two there now, which will be sold, with new models to arrive by the start of the next simulation season.

“We’re hoping to open November 1,” he said, adding that he fully anticipates this emerging business within the golf sector to continue growing and enable this investment to pay for itself in just a few years. “Just a few years ago, golf was declining, but since COVID … I’ve never seen anything like this. It’s absolutely crazy, and simulation is growing at an even greater rate.”