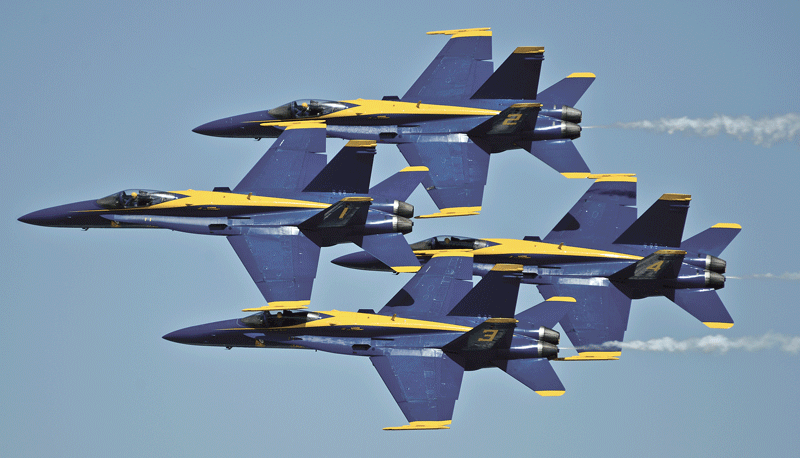 The U.S. Navy’s precision flying team, the Blue Angels, will be one of many star attractions at the Great New England Air Show later this month at Westover.

As he talked about the Great New England Air Show set for later this month, his expectations for large crowds, and even the clock that counts down the days, hours, minutes, and seconds until the show on its official website, Bud Shuback came back repeatedly to the phrase ‘pent-up demand.’

It explains quite a bit in a very succinct way, he noted, adding that there hasn’t been a major air show in this region for several years.

And by ‘major,’ he means a show featuring one of the military precision flying teams that have captivated audiences over the past several decades. Those demonstration teams were essentially grounded — at least for civilian shows such as this one — by federal budget sequestration in 2012. And there were other factors that kept such teams from performing regionally, such as a major runway reconstruction project at Barnes Municipal Airport, which has hosted an air show on even-numbered years for some time.

“We haven’t had one of those teams at Westover since 2008,” said Shuback, president of the Galaxy Community Council, which stages the Great New England Air Show, adding that the 2015 edition, which will help mark the 75th anniversary of Westover, will more than make up for lost time.

Indeed, the show will feature both the U.S. Navy’s Blue Angels and the Royal Canadian Air Force’s Snowbirds, as well as a host of other acts, in addition to traveling warbirds, including a B-17 Flying Fortress and an original, World War II-era C-47 transport plane, and a number of static displays.

“We’re expecting some very large crowds if the weather cooperates,” said Shuback. “We haven’t had a show like this in a while; we have quite a lineup, and people are very excited about this show.

“The demonstration acts were halted by federal budget cuts,” he went on, “but they’re back in full force again to inspire the next generation of aviation enthusiasts — and show what the taxpayers are spending their money on.”

The Blue Angels were scheduled to be in Rhode Island in early May, said Shuback, and the group placed a call to the Great New England Air Show organizers to see if they could perform in Chicopee the following week.

That opportunity prompted organizers to move the show from its traditional late-summer date, said Shuback, adding that the May weekend comes complete with a host of challenges — there are several college graduations slated, and hotel rooms are scarce — but the opportunity to book the Blue Angels was too attractive to pass up.

The air show will officially kick off with a breakfast on May 15 at Westover that raises funds to offset the cost of the event. Expected to draw 600 to 700 people, the breakfast will feature a salute to Korean War veterans and retired Air Force Col. Charles Brown as keynote speaker. A former B-52 pilot who was a prisoner of war after being shot down in North Vietnam, Brown completed his military career at Westover, where he served as logistics group commander for the 439th Airlift Wing before his retirement.

Breakfast attendees will have the opportunity to meet some of the military and civilians scheduled to fly over the weekend and also watch arriving aircraft and practicing teams until noon. Tickets are $30, and may be purchased in advance by visiting the show’s website, www.greatnewenglandairshow.com.

Those who choose to stay at the base following the breakfast might get an intriguing preview to the main event as the planes continue to arrive. The lineup features aircraft that cover several decades of aviation history, including:

• The C-47, named “Second Chance,” which was transferred to the Royal Air Force prior to D-Day and saw action in both Operation Overlord (the Normany invasion) and Operation Market Garden in the Netherlands. Show organizers are raffling off a flight on the plane;
• The B-17, one of the later models of that famous bomber, named “Yankee Lady”;
• The B-25 bomber named “Miss Hap,” one of the oldest of the surviving medium bombers used before and during World War II; and
• Other World War II-era aircraft, including an FG-1D Corsair, a TBF Avenger, a P-51 Mustang, and others.

The performing acts include the Blue Angels, who will be making their first trip to Westover, and the Canadian Snowbirds, precision teams that perform a host of maneuvers with the jets only inches apart; the U.S. Army parachute team the Golden Knights; a demonstration of the F-22 Raptor, the U.S. Air Force’s newest fighter aircraft; a demonstration of the Canadian CF-18 fighter; the GEICO skytypers airshow team; a flight squadron of six World War II-vintage U.S. Navy SNJ trainers; and the Sean D. Tucker & Team Oracle stunt flyers; Tucker has been named one of the Living Legends of Aviation.

There will also be several planes on static display, including a B-52 Stratofortress, a C-17 Globemaster, an A-10 Thunderbolt, a C-5 Galaxy, an F-15 Eagle, a C-130 Hercules, and others.

The event is made possible by a host of sponsors who help underwrite the costs of bringing the teams and displays to Chicopee, said Shuback. The sponsors of the 2015 show include Big Y, GE Aviation, Pratt & Whitney, and a host of local companies.

Admission to the air show is free. For more information, visit www.greatnewenglandairshow.com.