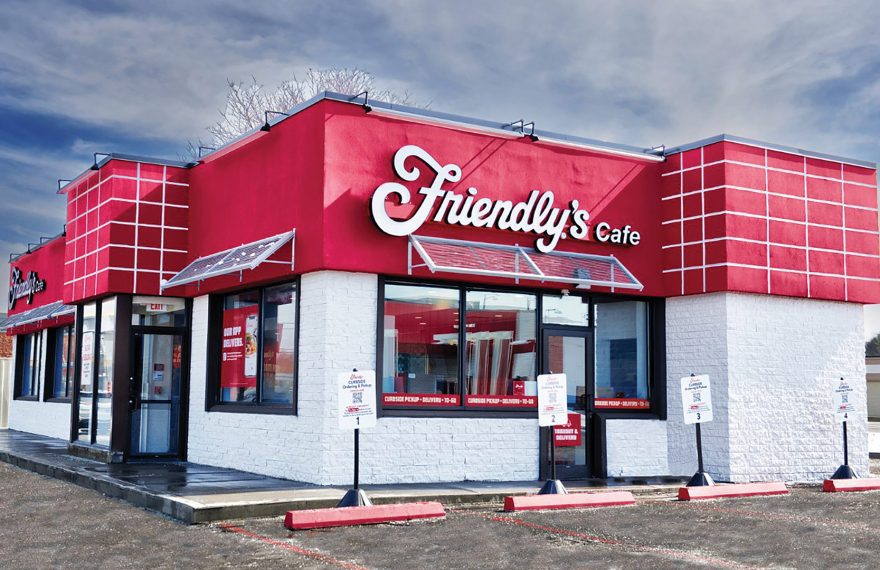 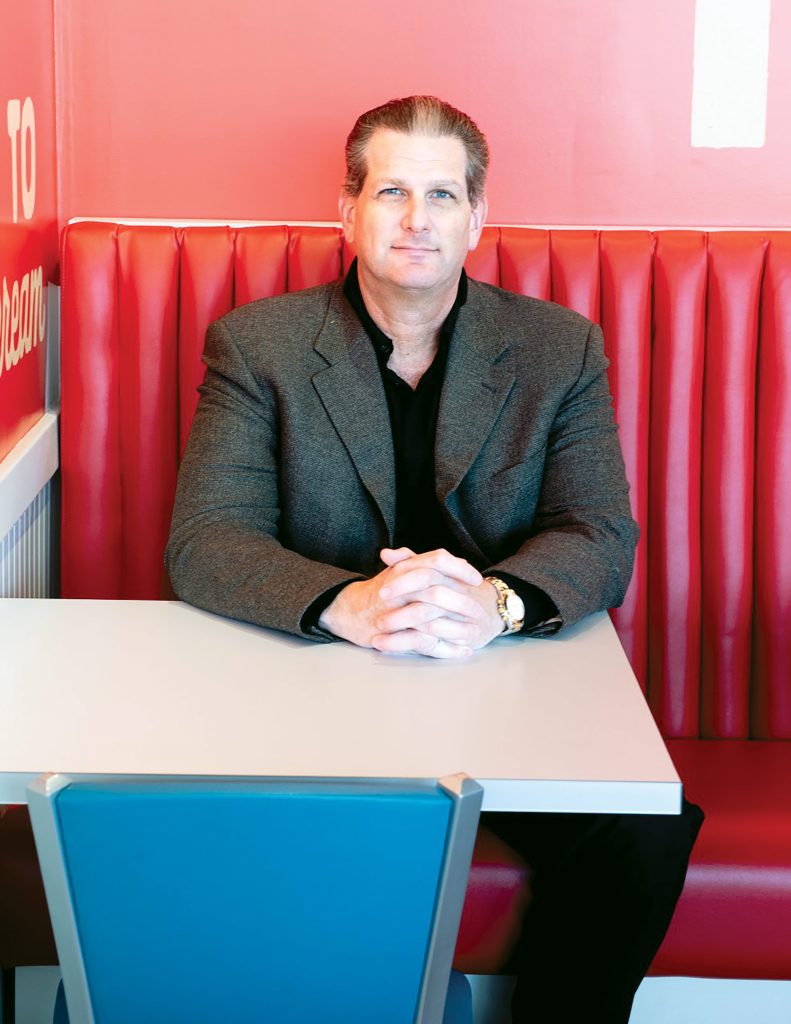 Craig Erlich says the mission at Friendly’s is to create positive experiences — and lasting memories.

Craig Erlich can trace his relationship with Friendly’s back to his fifth birthday party at one of the chain’s restaurants.

“I have pictures of me with my life-size balloon,” he told BusinessWest, adding that, over the decades, this relationship has certainly taken many different forms — from customer, to franchisee, to his current role as president and CEO, in which he has the responsibility of, well … creating memories like that of his fifth birthday for future generations of customers.

In other words, Erlich is the latest executive to take on the job of resuscitating a brand that has fallen on some hard times in recent years, as evidenced by the sale price of the Friendly’s chain, then in bankruptcy, to Amici Partners and its affiliate company, Brix Holdings LLC: $1.9 million.

Erlich, president and CEO of Friendly’s, understood that the Friendly’s chain had shrunk dramatically over the years and was struggling to compete with the large number of competitors in the fast-casual family restaurant category, a situation only made worse by the pandemic. But he ultimately saw promise, and a challenge he was willing to take on.

“When the opportunity came around — and the pandemic presented a lot of opportunities for reshuffling of leadership of brands — we were really passionate about Friendly’s and what could happen with this brand,” he said. “When you finally have your chance to put your hands on the steering wheel and go from backseat driver to being the driver … we were really excited about the opportunity.”

Elaborating, he said that he and his partners already had some plans for Friendly’s in mind when they acquired it in December, 2020, and now, some of those plans are coming to fruition.

That includes the new-look of the Friendly’s that recently opened on East Main Street in Westfield. It’s called the Friendly’s Café, and the model is a reflection of the changes in dining habits that have taken place over the past two years, especially when it comes to take out and delivery.

The new model will feature both, as well as on-site dining, with customers ordering food at a counter or at a table using QR technology. There’s also a traditional ice cream fountain area, providing an ice cream parlor feel.

While the concept is quite different from what Friendly’s customers are used to, the goal is to maintain the chain’s overall look and feel — and its capacity for creating lasting moments … like Erlich’s fifth birthday party.

“With Friendly’s, everyone talks about the experience — they talk about memories,” said Erlich. “We wanted to maintain that quality. When you’re restoring an old home, you want to make sure to keep the bones and the structure there, and just enhance the features. That’s the approach we took with this brand, especially the Friendly’s Café.

“We knew it was going to be a bit of a different kind of experience for the customers,” he went on. “But when you think about how people dine today, whether it’s QR technology, off-premise dining, curb-side delivery … we knew there was an opportunity for that.”

“When you finally have your chance to put your hands on the steering wheel and go from backseat driver to being the driver … we were really excited about the opportunity.”

Meanwhile, other changes have been introduced, especially on the menu, which now includes a number of new items, including a variety of appetizers and salads, and offerings like the Doritos Cool Ranch chopped cheeseburger. The goal is to create an appealing mix of new options and old favorites, he told BusinessWest, adding “the menu feels much more balanced than it did before.”

Flashing back to late 2020, as he and his partners were doing their due diligence on Friendly’s as they explored acquisition, Erlich said this research revealed a chain facing many challenges and restaurants in need of repair and revitalization, a situation exacerbated by the pandemic in many respects. But ultimately, what they saw was opportunity.

“The pandemic forced a lot of companies to focus on just keeping the lights on,” he told BusinessWest. “We knew there was going to be a significant amount of repairs and maintenance needed for these buildings; just the equipment in the kitchens alone was in the millions of dollars. 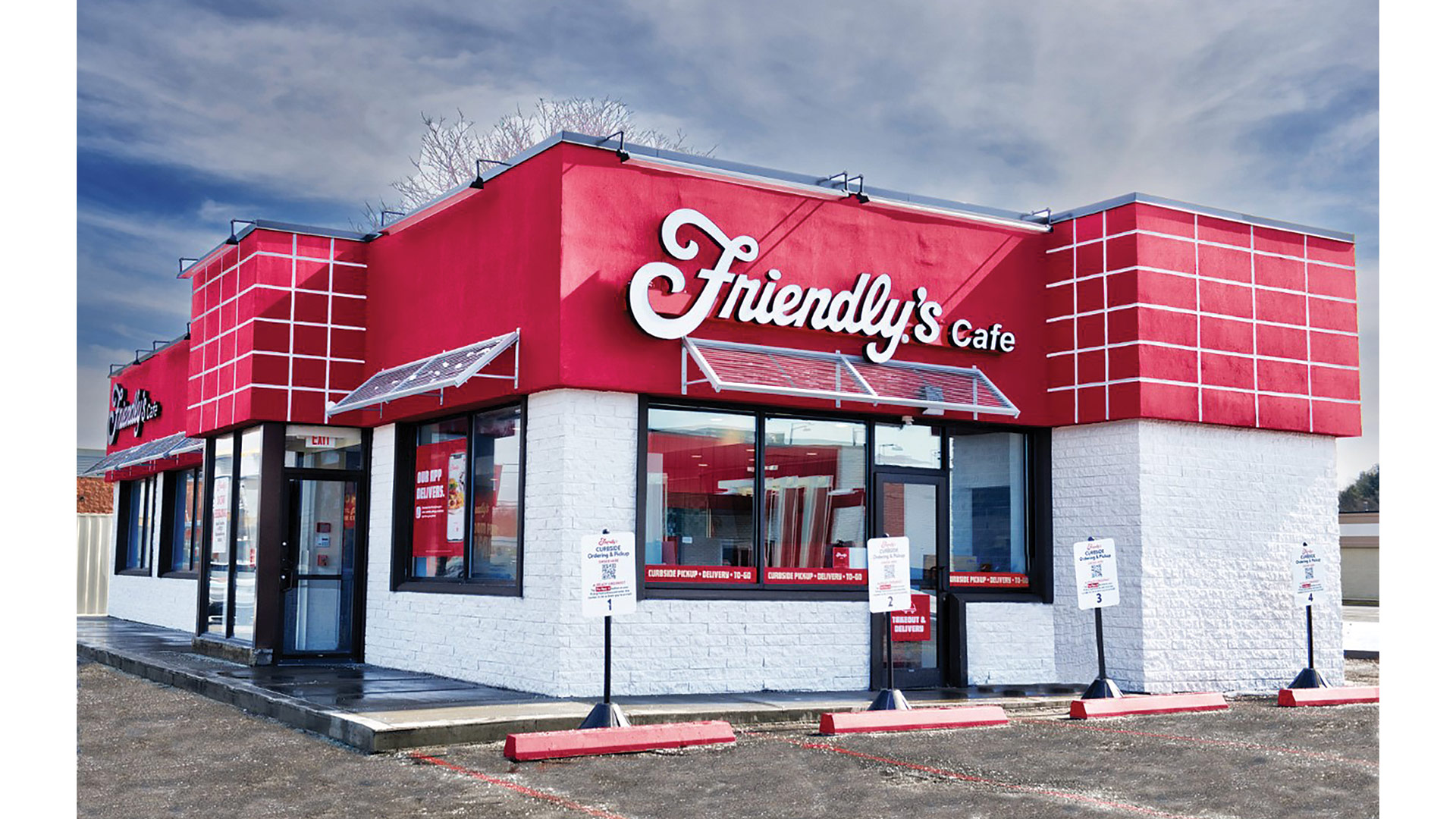 The Friendly’s Café in Westfield opened earlier this year to positive reviews from customers.

“But we saw a big opportunity,” he went on. “And 2021 was really focused on building the infrastructure and putting some technologies and new ideas in place that would build a foundation for what we’re about to do this year.”

Which brings us back to the Friendly’s Café, which opened at the end of February to solid feedback from customers, said Erlich, who acknowledged that while it’s early in the game, the new location is thus far exceeding expectations.

“Customers have been very complimentary, and it has performed very well; we’ve seen a lot of repeat customers, and that’s the true test,” he said, adding that the company is scouting locations for similar facilities.

The location in Westfield is a free-standing building in a shopping plaza, and that is the preferred model, said Erlich, adding that the company is also looking at expanding its drive-through presence at existing restaurants.

“We think there’s a big opportunity there,” he said. “We have about a half-dozen drive-throughs connected to our traditional restaurants; it’s all about the convenience, and we feel that this model is really convenient for the customer.”

Overall, the company is not looking to replace its traditional restaurants with the new model but rather use the café model as a vehicle for growth, bringing Friendly’s to different communities, including some where a Friendly’s location has closed.

“When you’re restoring an old home, you want to make sure to keep the bones and the structure there, and just enhance the features. That’s the approach we took with this brand, especially the Friendly’s Café.”

“I’m looking at some locations on Long Island and across the Northeast — Connecticut, Massachusetts, and other states,” said Erlich. “We’re looking for the right locations; we don’t want to expand too quickly and dilute the quality of the location. I think that happens often — some of the brands will get excited about one success story and then they’ll launch others and they think it will be the same in any location. We’re being very careful to be sure that the locations that we pick have similar demographics and traffic counts, and that we feel good about the potential.”

He said there are many communities in the Northeast that had a Friendly’s location and would like to see that brand back, with many long-time customers lobbying through social media and other platforms for a return

“We’re using that as some of our intelligence to start focusing on some areas,” he said, adding that finding suitable sites is an art and a science, with many factors coming into play, from demographics to the prevalence of other restaurants.

Indeed, competition, in the form of a critical mass of dining options is often desirable, he said, noting the Friendly’s Café in Westfield sits between a new KFC and a McDonald’s in the same shopping plaza. Those are fast-food chains in a different category than Friendly’s, he explained, but they still constitute choices, which in turn generate traffic to a given area.

Looking at what’s happening within the industry, Erlich noted that off-premise dining now accounts for roughly half of all sales volume within the industry, a pattern that has held up even as the pandemic has eased in recent months, an indication that this is more than a passing fancy.

The new café model enables the chain to take advantage of this phenomenon while also catering to those who prefer the traditional sit-down restaurant — albeit with some new technology for ordering and delivery.

“You can focus on two different experiences for the guest,” Erlich explained. “Whether it’s making sure that the person bringing the food home is getting a good, quality meal and also that they’re getting a good experience when they’re in the restaurant. It just adds a new dimension that a lot of brands are focusing on, and I know that we are.”

Looking ahead, and projecting where he wants Friendly’s to be in five years, Erlich said the broad goal since the acquisition has been to stabilize the brand and then commence building that foundation for the future that he spoke of. And this has been accomplished, through the introduction of the café concept, the new menu items, and some more aggressive marketing that was launched this month.

“I would like to see the brand grow, and I think the café model will give us the ability to do that,” he said in conclusion. “There’s a lot of excitement, and it’s my job to keep that excitement going and channel it in the right direction. Everyone is rooting for us, from customers to the team members to the franchisees. Everyone has great memories of Friendly’s, and we want to provide great new memories.”

“Our family could use your prayers now … my dear Uncle Pres just passed 2 hours ago, at age 106. The end of a legend! Co-founder of Friendly Ice Cream, along with his brother, my Uncle Curt, who we lost in May 2019, he will be sorely missed! We love you, Uncle Pres! Godspeed and please give Gram and Grandfather and Uncle Curt a HUGE hug and kiss for me! Until we get there, take care of them for us!!!”

Brothers Curtis and S. Prestley Blake built Friendly’s from a single ice-cream shop in Springfield’s Pine Point neighborhood into a chain with 850 restaurants at its height. Curtis died in 2019 at age 102.

WILBRAHAM — FIC Restaurants, Inc., the restaurant company operating under the brand name Friendly’s Restaurants, announced an agreement to sell substantially all of its assets to Amici Partners Group, LLC, according to the Associated Press. Amici is currently affiliated with BRIX Holdings, a multi-brand franchising company with national and international experience in the restaurant industry.

“Over the last two years, Friendly’s has made important strides toward reinvigorating our beloved brand in the face of shifting demographics, increased competition, and rising costs,” said George Michel, CEO of FIC Restaurants. “We achieved this by delivering menu innovation, re-energizing marketing, focusing on takeout, catering and third-party delivery, establishing a better overall experience for customers, and working closely with our franchisees and restaurant teams. Unfortunately, like many restaurant businesses, our progress was suddenly interrupted by the catastrophic impact of COVID-19, which caused a decline in revenue as dine-in operations ceased for months and reopened with limited capacity.

“We believe the voluntary bankruptcy filing and planned sale to a new, deeply experienced restaurant group will enable Friendly’s to rebound from the pandemic as a stronger business, with the leadership and resources needed to continue to invest in the business and serve loyal patrons, as well as compete to win new customers over the long term,” he added. “Importantly, it is also expected to preserve the jobs of Friendly’s restaurant team members, who are the heart and soul of our enterprise and have been critical to the progress we have made in transforming this iconic brand.”