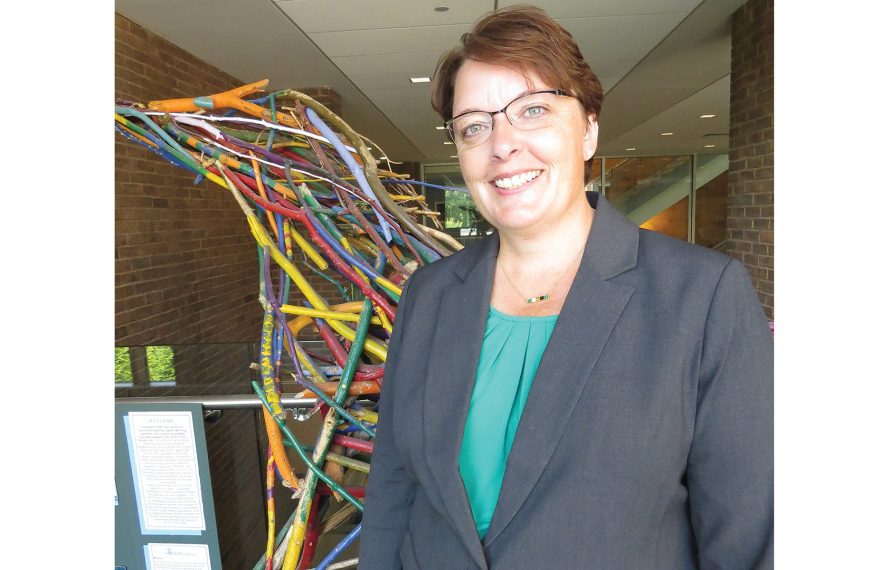 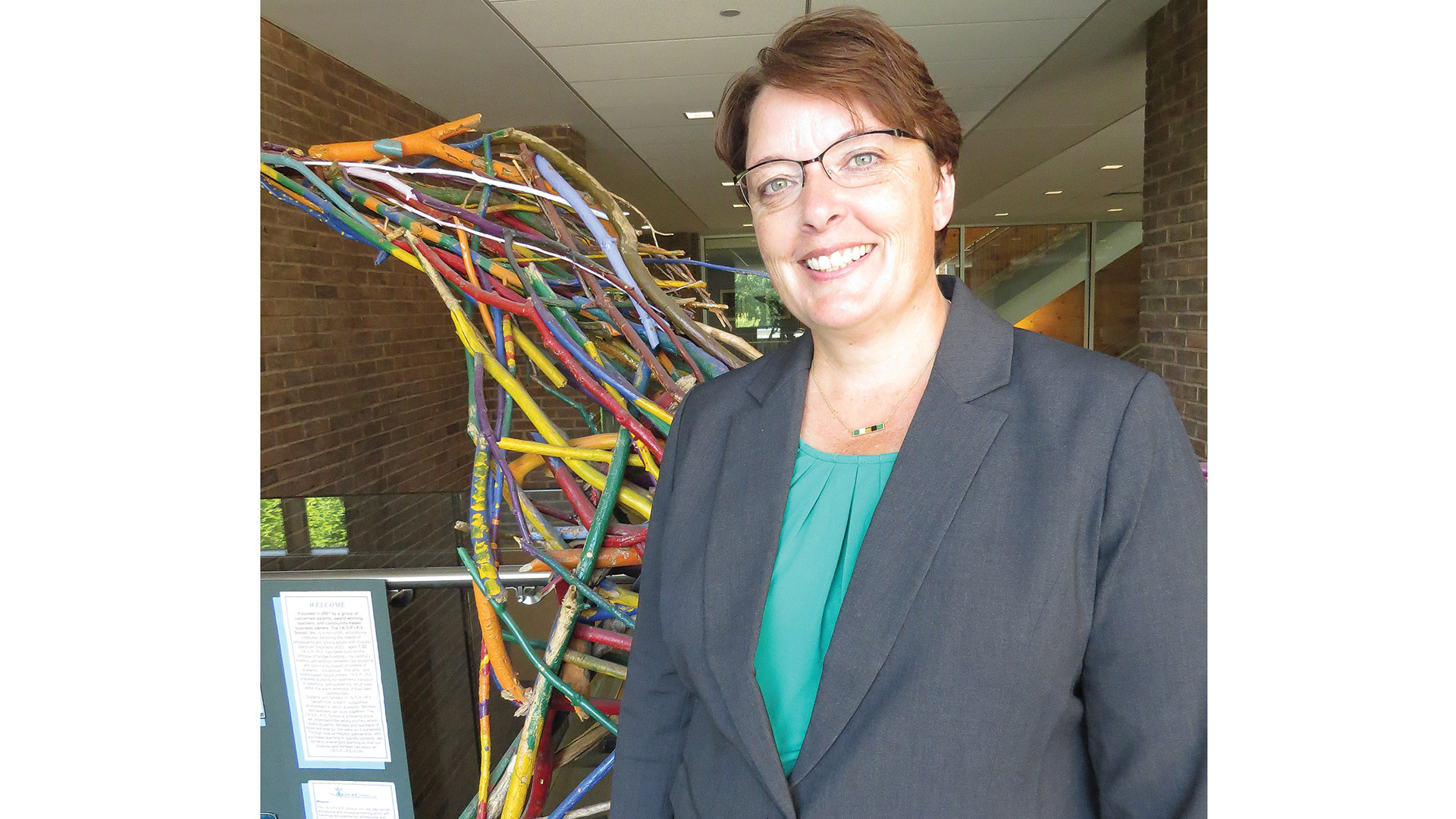 Michelle Schutt says that, while it may seem like Greenfield, Mass. is a long way from Twin Falls, Idaho (3,160 miles, to be exact), it’s really not.

At least when it comes to the issues and challenges facing the institutions that now comprise the top lines on her résumé — College of Southern Idaho (CSI), where she was vice president of Community and Learner Services, and Greenfield Community College (GCC), where she started just a few weeks ago as the school’s 11th president — and their overall missions.

“There are many similarities between these communities,” she explained. “There’s a high number of first-generation college students, people who are hungry for educational opportunities, definite need within the community … they are very much alike, which lends itself to the applicability of what I’ve done in the past and what I hope to do the future. I’m a big believer that education opens doors and changes family trees, and that we can all be educated.”

Schutt comes to GCC with a résumé that includes considerable work in the broad realms of student services and diversity, equity, and inclusion, and she said this will be one of the main focal points at GCC.

“If we’re going to recruit and retain students,” she told BusinessWest, “we’ve got to take into account their entire experience because often, it’s not the academic rigor or even the finances that keep them from succeeding; it’s the social-capital issues of how they’re maneuvering through life.

“COVID definitely exasperated the social needs of our students,” she went on. “But they were always there.”

Regarding diversity, she said this issue is often looked at through the lens of ethnic diversity — and that is certainly part of it. But there are many aspects to this matter, some more visible than others, and they must all be considered at institutions like GCC.

“If we’re going to recruit and retain students, we’ve got to take into account their entire experience because often, it’s not the academic rigor or even the finances that keep them from succeeding; it’s the social-capital issues of how they’re maneuvering through life.”

“It’s a little cliché, but this is a bit of an iceberg topic,” she explained. “There are the physical things that we notice about each other, and then there’s the 90% of the iceberg that’s below the water line; you really need to get to know someone before you can fully understand how they, too, are diverse.”

Schutt told BusinessWest that, after more than 20 years of work in higher-education administration — work that had taken her from St. Cloud, Minn. to Hanover, Ind., Laramie, Wyo., and then Idaho, she considered herself ready to be a college president, and began looking to apply for such positions.

This recognition didn’t come overnight, she said, and it was actually several years after the then-president of CSI asked her to consider that position before she considered herself truly qualified and ready to take the helm at a campus.

She said she looked at a few opportunities that presented themselves — there have been a number of retirements and shifts in leadership in higher education (as in other sectors) over the past few years — but soon focused her attention on GCC.

Schutt said the school — which this year celebrates its 60th anniversary — and its mission, the area it serves, the team in place, and the institution’s prospects for future growth and evolution all appealed to her.

Her immediate goals are to become acquainted with the school, its staff and faculty, as well as Greenfield and the broader area served by the college.

Looking longer-term, she said she wants to properly position GCC for a future where enrollment will be even more of a challenge than it is today, and where students’ ‘needs,’ a broad term to be sure, will only grow.

“Nationally, we’re heading for an enrollment cliff,” she said, adding that 2025 is the year when already-declining numbers are expected to reach a new and more ominous level. “We have to ensure that we’re offering what people need and what people are looking for; we have to take a look at what we’re doing in workforce and in community education and what we’re doing with credit-based courses, and align those with good outcomes.”

As noted, Schutt brings to GCC a résumé dominated by work in student services, with a focus on diversity and inclusion.

“If they’re stressed about some sort of insecurity or some issue related to childcare or transportation, it’s really difficult to focus on calculus. That’s where student affairs and student services come in — to educate the entire student.”

But she believes many of her most significant gains came in the realm of diversity, equity, and inclusion.

Indeed, Schutt noted that, in helping CSI become a Hispanic Serving Institution (HIS), she recruited and hired bilingual staff members for each area of Student Services, spearheaded CSI’s first HIS Week, lobbied the board of trustees for gender-neutral bathrooms on campus, developed and offered a program called Parent College in both English and Spanish, established the Gay-Straight Alliance student group, and advocated for and hired the school’s first full-time veterans’ coordinator.

Prior to CSI, she served as director of Student Affairs at Penn State University’s campus in Scranton. As a member of the school’s senior administrative leadership team, she was engaged in strategic planning, policy development, and problem solving.

She said that she gravitated toward work in student services (she also teaches) because of its importance to the success of not only students but the institution in question. Summing it up, she said such work falls into the realm of student success and making sure they can get on — and stay on — a path to achieving their goals, whatever they may be.

“It’s about ensuring that their housing and food and social integration and mental health and physical health are all taken into account as it relates to their journey,” she explained, “because all of those things play a factor in their academic success.

“If they’re stressed about some sort of insecurity or some issue related to childcare or transportation, it’s really difficult to focus on calculus,” she went on. “That’s where student affairs and student services come in — to educate the entire student.”

When asked what she liked about this aspect of higher education, she said there are many rewards that come with it, especially those derived from helping students clear some of the many hurdles to success.

Looking to take her career in higher education to a higher plane, Schutt looked at several job opportunities, but eventually focused on the presidency at GCC because of what she considered a very solid match.

Compatibility was revealed the initial interview, conducted via Zoom, and then reinforced at a day-long, in-person session, during which she met and took questions from several constituencies, including faculty, staff, students, and other stakeholders.

“There is a shared set of values that focuses on students and recognizes the importance of community integration for a community college,” she said when asked what she came away with from that day’s experiences.

“When I came to campus, it was validating to meet people who truly care about students,” she went on. “And that was conveyed in every group that I met with; that was conveyed by the students — that they felt they were cared for. And those things are really important to me; you can’t make that up. And the end of the day, if you don’t care about students, the students know that.”

As noted, Schutt will bring a deep focus on the importance of equity, diversity, and inclusion to her new role, noting that, while she has always had an appreciation for these matters, it reached a new and much higher level through her experiences teaching English and social justice.

“I was teaching in the evening, when we had the greatest diversity of students,” she explained. “And to understand the general college-student experience was really eye-opening to me and made me a better administrator.

“That’s because, as a vice president, you see the highly successful students, or the students who were in great despair, who may not persist no matter how we helped them,” she went on. “To see the 40-year-old mom coming back to school, the 16-year-old dual-credit student, the student with limited English acquisition, the working dad … all those people coming together in one class really opened my eyes to the immense diversity in who we educate in community college.”

At CSI, Schutt said, it became a priority for the school to become a Hispanic Serving Institution, and the many steps taken to achieve that status became learning experiences on many levels. And, ultimately, they helped enable the school to better serve all its students.

“We worked really hard to make sure we were understanding the Hispanic student experience and that we were ensuring equitable outcomes and inclusionary practices,” she explained. “There were always critics who would say, ‘you’re focused on Hispanic students only.’ Well … no, we were making all our practices and policies better for all of our students.

“We worked very hard to get designation, but along the way, we also worked on broadening our understanding and awareness of all students,” she went on. “I lobbied in front of the board of trustees for more gender-neutral bathrooms and started a food bank and made sure we had a full-time veterans’ coordinator. Those are things that improve opportunities for all our students.

“When we’re taking about equity, we’re making sure that everyone has the same opportunity,” she continued. “But how they get there may look very different, and the inclusion component of it is celebrating those differences, and there’s a lot of work to be done — in the field, in society — and Greenfield isn’t any different.”

Elaborating, she said it’s one of her goals to soon have an administrator focused specifically on diversity, equity, and inclusion, a broad realm that, as she said, goes beyond ethnic diversity and to those matters below the tip of the iceberg.

“DEI here might look at educational attainment, it might look at poverty and wealth inequities, it may include LGBTQ identities — there’s diversity everywhere,” she said. “We can’t say, ‘we all look the same here in Greenfield or in the Pioneer Valley, so there is no diversity.’ Diversity is everywhere; it just may not be as obvious.”

Looking ahead, Schutt said she’s looking forward to filling her calendar with meetings with local officials and members of the business community as she works to gain a broader understanding of the community served by the college.

She’s also looking forward to the fall, and a projected increase in enrollment as the school looks to fully recover from the pandemic and its many side effects, as well as the coming year, an important milestone for GCC as it celebrates 60 years of growth and change.

Mostly, though, she’s looking forward to continuing what has become, in many respects, her life’s work in student services and diversity, equity, and inclusion.

As she said, if schools like GCC are to successfully recruit and retain students, they must take into account their entire experience. And this will be the focus of her efforts.