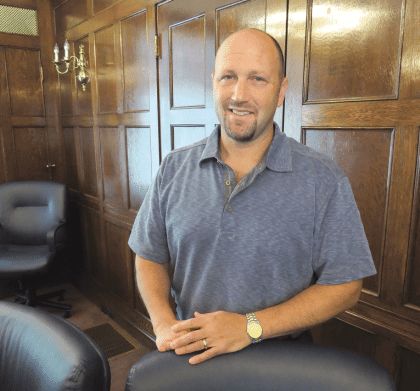 Joshua Weiss says negotiation isn’t a lost art, but simply one that too many people haven’t taken the time and trouble to master.

Joshua Weiss was talking about the difference between being assertive and being aggressive.

And while doing so, he made it clear that, in the worlds of leadership and negotiation, these terms that appear to be synonymous are anything but.

“When you’re assertive, you’re standing on your own two feet, and when you’re aggressive, you’re standing on the other person’s toes, and people often don’t make that distinction,” said Weiss, co-founder of something called the Global Negotiation Initiative at the Program on Negotiation at Harvard Law School. He’s also an acclaimed author and consultant in the field who now has a new title on his business card, although they haven’t actually arrived from the printer yet.

Indeed, he is the director of Bay Path College’s newest program, the Master of Science in Leadership and Negotiation, or MSLN.

This fully online initiative is the first of its kind — in this country and probably on a global basis as well, said Weiss, adding quickly that understanding the difference between assertive and aggressive is just one of many things students will learn in this program, which will begin this fall.

“Aggressive … that means I steamroll you to get to where I want to go,” Weiss explained, returning to his lesson in both vocabulary and effective management. “Being assertive means I explain clearly that ‘this is what I need, and I want to work with you, but I’m not going to accept anything that doesn’t fit into that.’

“You have to understand what you want to achieve, and assert for that,” he went on, “but also understand that the relationship is going to exist after this negotiation, and that there’s a way to go through negotiations so you don’t burn bridges — you don’t have to.”

“A lot of people see negotiation as what the select few — the diplomat or the contract negotiator — would do,” he said. “There’s a sense that certain people negotiate and others don’t.”

These are flawed assumptions, he went on, adding that both leadership and negotiation can be taught and have been taught over the years, but not in a very comprehensive way — usually with a course or perhaps two, not with a degree program.

Such a higher level of instruction is necessary, he said, because advancing telecommunications technology and the emergence of flatter organizational structures in companies of all sizes means that more people will — or should be — called upon to provide leadership and negotiate, and they will have to do both in different ways and with a wider array of issues.

Indeed, while most think of negotiation in terms of mergers, acquisitions, and salary numbers — and those are still important parts of the equation — it now also involves such matters as flex time, working environments, and generational differences when it comes to the evolving world of work.

For example, while the conference-room table has long been the unofficial symbol of negotiation, people are now doing it with e-mail, text messages, and a host of other media, he said, adding that successfully leading, and dealing, through these platforms requires specific skills.

All these factors and others led Bay Path, with some strong encouragement from Weiss, to create the new program, which he believes will become attractive to both graduating seniors and those already in the workplace looking to advance, and who are seeking an alternative to the traditional MBA.

For this issue and its focus on education, BusinessWest talked at length with Weiss about negotiation, leadership, the new program, and why that acronym MSLN might soon become an important part of the regional business lexicon.

This is, as the name suggests, a walking trail across the Middle East that essentially follows the epic journey of Abraham, considered the world’s first pilgrim. It starts at his birthplace in Urfa in Turkey and ends at his burial cave in the Palestinian city of Hebron. Other stops include Nablus, Jericho, Jerusalem, and Bethlehem.

Weiss was part of the team that worked to create the path starting in 2003, and he called it a learning experience on a number of levels, and especially when it comes to negotiation.

“Right now, despite all the things that are going on in that region, there’s about 500 kilometers of path that have been mapped and are in use,” he explained. “Some people walk considerable distances, and others go for a day; there are many students and others who do community-service projects along the path, everything from helping with the olive harvest to painting a school — ways in which people can come to understand, and interact with, the region differently.

“Early on, my job was to go and negotiate with the governments and get their approval for this,” he went on. “There were negotiations all over the place, from the national governments down to the governors, mayors, to sitting in villages with families drinking goat’s yogurt and trying to persuade them that this was an interesting idea and that they should get involved.”

Weiss will take lessons from the Middle East, as well as others from countless businesses he’s consulted for, and try to impart them upon students who enroll in the MSLN.

This is an initiative that meets his desire to return to the classroom (he’s taught at Harvard and other schools) and direct a program, but that also meets what he considers a critical need — for employees who possess more and better leadership and negotiation skills.

“A lot of people tend to see negotiation as a skill that leaders need,” he explained. “I see it much differently; I believe negotiation is very much a mindset and how you approach issues and challenges that come up. Yes, leaders need to learn how to negotiate, but leadership today, from my perspective, requires a lot of different skills.

“You certainly still at times have the ability to coerce others, but leadership seems to rely more on persuasion and empowerment and on modeling the kind of behavior you’re looking for from your employees,” he continued. “So I see this degree as being good for both the student in terms of their own growth and ability and being able to move on from where they are to the next level, but also very valuable for an employer, because if I know I have someone who is very skilled in leadership and negotiation, I can hand that individual a project knowing that it requires the ability to lead, and when problems come up, he or she can negotiate their way through them; they’ve become a very valuable employee, and one that I don’t have to worry about.

“Leaders often micromanage because they worry and lack trust in people and their skill sets,” he went on. “With these skills, people will ultimately become real assets.”

Even better, he told BusinessWest, he believes these skills have a way of rubbing off on other people, meaning that effective leadership and negotiation can permeate a team or a company.

Returning to the subject of negotiation, Weiss said it has always been part of doing business — and life in general — but it is in some ways changing and evolving, and those who wish to advance their careers need to appreciate both its importance and many nuances.

“I tend to view negotiation in a very broad sense,” he explained. “To me, negotiation is ubiquitous; it’s something we deal with every day. So, in the workplace, it may be more formal negotiations where you’re talking about mergers and acquisitions or a job salary. Or it may be more informal things when you’re working on projects with employees and there’s a disagreement and you need to go back and forth and figure out how you’re going to work together in a different capacity.”

Elaborating, he said there isn’t necessarily more negotiating going on today, although one might be able to make that case. Instead, people are increasingly recognizing that negotiation is what they’re doing, and that they need to become better at it.

There have been some seminal moments that have helped manifest this mindset, he went on, citing, in particular, the publishing of Getting to Yes, authored by Roger Fischer and William Ury, in 1981.

“It’s been on the bestseller list ever since,” said Weiss, adding that the book and others that followed helped foster an understanding of the importance of negotiation. “If the average person had experience with negotiation, they thought about it in terms of buying a car or a home or something like that. This book changed all that and got people to realize that, first of all, a lot more of us are negotiating, and there’s a different way to negotiate, one that for a lot of people feels more comfortable.

“Part of the reason people don’t like to negotiate for things like cars is that they feel like the process itself centered around manipulation,” he said. “That’s one way of approaching negotiation, but there’s another way; for most of us, our negotiations are with people that we have to work with over time, and so that model of manipulating and distrust is a self-defeating way of negotiating.”

The model that was presented in Getting to Yes and has been built upon ever since is called ‘interest-based negotiation,” said Weiss, adding that, in simple terms, it involves creating scenarios where there is not a winner and a loser, but where both sides’ interests are respected and, by and large, met.

“When people started to realize that they were negotiating with someone they needed to work with over the long term, they understood that it would be better to build a relationship so that they meet the needs they have rather than trying to one-up each other,” he said, adding that, over the past several years, and especially since the recession broke out in 2008, businesses are embracing this concept.

While books like Getting to Yes have opened some eyes about the importance of negotiation, there have historically been only limited opportunities to learn about it in the classroom, said Weiss.

He noted that many law schools and business schools offer a course or two in the subjects of negotiation and leadership, and that in many instances, such offerings are required. But such courses provide only what Weiss called the basics. Bay Path’s new program amounts to what he called a “deep dive.”

Weiss said there has been strong early interest in the program, and he expects to start with eight to 10 students in the fall and see that number rise as individuals, businesses, and nonprofit agencies realize the importance of leadership and negotiation to their success moving forward.

As he talked about his program and its target audience, Weiss relayed the comments of a biotech engineer who has been kicking the tires on Bay Path’s new offering and leaning toward enrolling.

“She said, ‘I’ve been looking at MBA programs, but keep getting pulled back to yours because I don’t want budgets and finance and that kind of stuff,’” he noted. “She said, ‘where I am, technically I’m very good at what I do, but I’m in a mid-level position, and I know I’m capable of more than that. What’s holding me back is this ability to assert for myself and lead other people; I don’t know how to do that.’”

There are countless others who can say the same thing, and because they can, Bay Path’s program would appear to be the right offering at the right time.