Singing for Your Supper 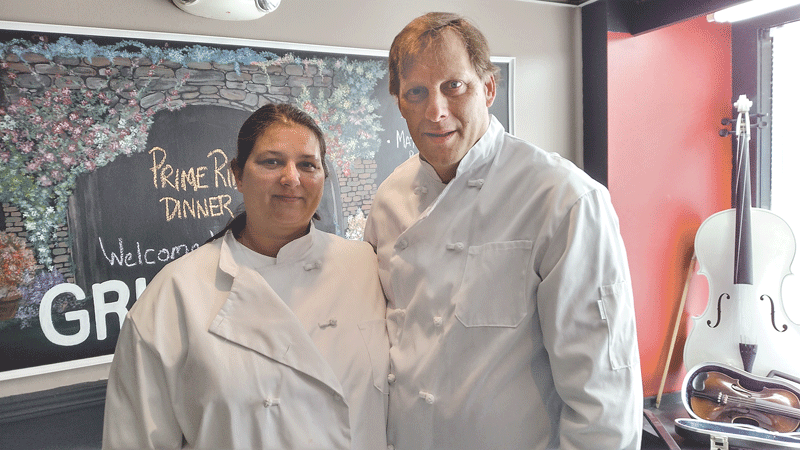 Tony Serafino, with his business partner, Dawn Doyle, says he wanted to create a destination, not just a restaurant.

As a 30-year veteran of the restaurant industry, Tony Serafino wasn’t interested in just another eatery when he considered opening the Grill at the Boulevard.

That’s why diners enjoying a dinner of pasta, steak, or any number of other options on a Thursday, Friday, or Saturday night are treated to the spectacle of a server — or several — making their way to the front of this cozy establishment on Page Boulevard in Springfield, picking up a microphone, and belting out a few standards.

“When I opened this business, I wanted to try to recreate the Copa on a much smaller scale,” he said, referring to the Copacabana, the famed New York nightclub known through the decades for its array of live entertainment.

“I had visions of waiters like in Goodfellas, leading people through the crowd and sitting them in front while Frankie Valli was singing — not that we have Frankie Valli, but you get the idea. I wanted to give it that extra thing needed to make this location a destination. We weren’t going to survive off neighborhood business alone — the volume just isn’t there. To bring people to us, to become a destination point, we needed something different.”

The Grill’s success since he and his business partner, Dawn Doyle, opened on Super Bowl weekend in February testifies to the appeal of the ‘singing servers,’ as they’re known, but also to a varied lunch and dinner menu made from scratch. “Everyone says the food is the greatest,” said Serafino, who’s also the executive chef. “That’s one thing that’s really helped build us and kept us going.”

Serafino’s previous executive-chef positions included stints at restaurants owned by long-time friend Jim Efantis, who also owns the building that now houses the Grill and an adjoining bar, Rory Fitzgerald’s. The space next to the bar had been vacant for several months, and, truth be told, it needed plenty of work. But he saw some potential.

“I looked at the space and thought it could be a decent lunch, dinner, and breakfast space,” he told BusinessWest, noting that breakfast is currently served on Sundays only, but that could change as CRRC Rail Corp., the Chinese rail-car manufacturer establishing its North American headquarters in Springfield, builds its factory across the street on Page Boulevard, intending to employ several hundred people.

“It’s a neighborhood bar, and the building is the oldest established boarding house in the city of Springfield,” he noted. “I was intrigued by what was going on across the street, and figured we’ll have a few months to get our feet wet.”

The walls of the Grill are adorned with striking, hand-drawn portraits of mid-century musical icons, from Frank Sinatra to Patsy Cline to Louis Armstrong, a visual accompaniment to the music patrons will hear.

“One thing I’ve always wanted to do in my career was to create a small, Copacabana-type atmosphere, with singing waiters,” Serafino said. “And it’s really starting to come to fruition. The customers are having a ball. We try to keep it to the ’30s and ’40s musical theme, but if the crowd wants to hear something from Grease so they can all sing, we can do that too.”

So far, the concept has been a winner, he added. “People keep coming back, and we’re always seeing new faces, too.”

He said the development of the rail-car facility could usher in a weekday breakfast menu, but he wants to keep changes to a minimum at first. “I’ve been doing this for almost 30 years, and you can’t have rabbit ears when people say, ‘do this’ or ‘do that.’ You have to stick to your business model and get it working before you start adding on.” 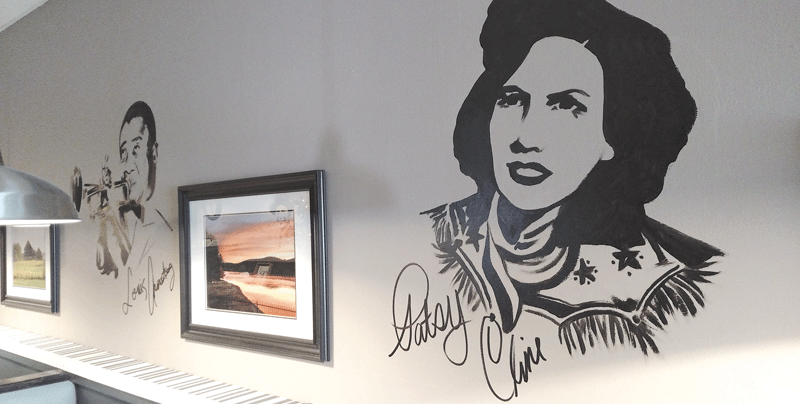 The walls of the Grill at the Boulevard are decorated with drawings of some of the musicians patrons might hear covered by the ‘singing servers.’

That lunch and dinner menu, which he characterizes as ‘upscale American bistro’ food, features pasta selections like tortellini alfredo and buffalo mac and cheese, beef dishes like New England pot roast and short ribs, and other options ranging from chicken francaise and chicken marsala to pork milanese — and, of course, daily specials.

“We are a scratch kitchen; everything from the bread on up is made right here,” Serafino told BusinessWest, adding that the menu, which features about 20 entrees and a dozen appetizers, is complemented by at least three specials a night.

“At any given time, it could be blackened New York strip, blackened Delmonico with gorgonzola fondue … the risotto here — and I’m going to toot my own horn, because I can — is the best you’ve ever had, and my customers will tell you that.

“We’re also very big on plate presentation,” he went on. “A lot of these kids [servers], they’re young and had to be trained in these little things that the customers appreciate. But we’re all about having fun with good food and good friends at a blue-collar price.”

The three nights a week when the servers sing are the most popular, he admitted. When the small house is packed and the music is playing, Serafino noted, the festive atmosphere gets contagious. “All these people have no idea who each other are, but as they’re walking out, they’re shaking hands like they’re best friends. They all get into it, and they have a ball.”

Those images are gratifying to Serafino, who believes his goal of establishing a destination restaurant on Page Boulevard — and maybe other regional locations — is a viable one.

“It’s doing well. I think we’re going to outgrow the place,” he said, adding that one expansion option in the future would be to keep the ‘Grill at’ name with each new establishment, as in Grill at Main Street or Grill at Forest Park, or wherever he might move the concept.

He admits some people are still getting accustomed to that concept, and his vision for the bistro menu. One woman became upset — and left — when the sides for her steak dinner didn’t include a baked potato, insisting that the Grill is a steakhouse, and steakhouses serve baked potatoes.

Fortunately, most patrons are happy that Serafino is following his own muse.

“Some people will try to label you as a specific kind of restaurant,” he said. “All I know is, a lot of people really enjoy it.”

Be Careful with Handshake Deals