O.C. White’s owner, Richard May (left), and his son, Richard, stand near some of the company’s lighting offerings.

Richard May, owner of The O.C. White Company in Thorndike, has a wide array of antique lights and magnifiers adorning his office.

All of them are products made by his company, a lighting, audio, and magnification fixture manufacturer, at the start of its 113th year in business. May hopes to acquire several more, displaying them in a showroom now being devised in the six-story mill building in Thorndike, a village of the town of Palmer, into which he moved the company in March.

“It’s going to be designed as a ‘walk through time,’” May explained, noting that the showroom will have a museum-like feel and display some of O.C. White’s earliest and latest contributions to the industrial world.

Many of the items are collector’s items today, as they’ve been used through the years everywhere from textile mills to battleships. That’s a good thing for the O.C. White name, becoming more recognizable each year among antique dealers, but not for May himself, who, despite owning the company at which they were manufactured, must scour flea markets and online auctions regularly, paying top dollar for each and every piece. He purchased one lamp directly from the Edisonian Museum, a collection of antique electrics.

“There are a great many variations,” said May. “Some I’ve never seen, even after 40 years with the company. I find most of them on eBay, where antique dealers don’t think twice about paying thousands. The original molds stamped that O.C. White name right onto the piece, and that’s what the collectors look for.”

A Business with Bite

O.C. White has an intriguing history that is still being written. The company was founded in Worcester in 1894 by Otis White, a dentist who, after failing to find such an instrument in the marketplace, invented a small reflector — illuminated by a flame — to peer at teeth from all angles.

“Basically, he started this company out of need, but he was quite the inventor,” said May.

Records from those times are sketchy — “in the early years, everything was just spoken, not written down,” May noted — but White is also rumored to have invented the first tilt-back dentistry chair, before moving on to create a long-armed, swiveling light that could be easily moved back and forth from a stand.

This invention is documented, by four awards garnered by White at the 1901 Pan American Exposition, a precursor to the World’s Fair. The awards, a gold, silver, bronze, and honorable mention, hang in May’s office as a reminder of the company’s auspicious roots.

Throughout the next 50 years, O.C. White diversified, and began to create a wide range of industrial-strength lighting fixtures, including some for battleships during World War II.

By the 1950s, the company had also become the nation’s largest machine light supplier, working with nearly all machine builders in the country.

May’s father, Robert May, was working as a sales representative in the lighting industry at that time, and in 1962, he purchased O.C. White from the White family. The machine lighting market had begun to decline by the 1960s as Japanese outfits positioned themselves as the world leaders in that realm, but O.C. White was able to shift with the times, developing and manufacturing new products that catered to the electronics industry — items like draftsman’s lights, spring-armed lights, and other work-oriented products designed for industrial use and abuse.

“Our forte is offering products with a form, function, and fit that is superior to existing products on the market,” said May. “We’re not a retail outfit because we can’t outprice the lights and fixtures you’ll find at retail stores, so we make the best products that aren’t priced for normal, regular use.

“That’s how our company is different – the quality,” May continued. “It’s possible for one of our products to hold up for years and withstand the greatest abuse.”

The company moved its headquarters from Worcester to Three Rivers, another village of Palmer, in the 1980s, and recently relocated to its new home — a 92,000-square-foot brick mill building once used by Thorndike Awning, and later by Federal Paperboard, among a handful of other manufacturers. O.C. White will use all but 20,000 square feet of the property, which May said will be leased. In addition, he’s taken on what he estimates will amount to about $600,000 in renovations.

“The building is a great shell, but it needs several upgrades to bring it up to current levels for manufacturing today,” he said, noting that the historic showroom will be one aspect of those improvements, doubling as a conference room for clients and distributors, and a tutoring mechanism for new hires.

The latter will instill the importance of the O.C. White name and story, but also introduce the newest products available to the company’s 250 distributors, and how and why they came to fruition.

Today, the company still specializes in spring-arm light fixtures, as well as a suite of newer products that speak to the outfit’s ability to continuously shift gears along with the economy. It has a medical and life sciences division, for instance, that produces high-power microscopes, video monitors, and high-resolution video screens. Imaging firms such as Olympus and Leica use O.C. White components in their products. May said his company both designs and manufactures such items, sometimes contracting a portion of the manufacturing with other U.S. companies, but often completing every step in-house.

Lights and magnifiers for microscopes have become core products, as have lights for video systems and heavy-duty microphone arms that are considered some of the best in the broadcast industry. The product lines may have diversified, but May said that devising sturdy, long-lasting products is still very much a part of the O.C. White mission.

“Every day, you can see our microphone arms on television,” said May, who designs many of the products he sells himself along with O.C. White’s engineers. “They have the best functionality and hold far more weight, without jiggle or squeak. That means they won’t affect radio and television transmissions, and that’s made them the industry standard.”

Moving ahead, May said LED, or light-emitting diode technology, is the future of the business — especially small fixtures used in detail work to view small items.

LEDs form the numbers on a digital clock, assist in the transmission of data from a remote control, illuminate watches, and signal when a household device is on. They’re essentially tiny light bulbs that fit easily into an electrical circuit, but unlike ordinary incandescent bulbs, don’t have a filament that will burn out, and don’t get especially hot.

“Electronics is dying,” he said, “so the key for us will be designing high-level, better-functioning LEDs.”

In the meantime, he’s on the lookout for a particular model of O.C. White lamps, one that hovered over seamstresses as they hunched over industrial sewing machines in the 19th and early 20th centuries.

Finding one will help complete the showroom May is building, but, more importantly, it will help shed more light on why this company with the rich history has a seemingly bright future. 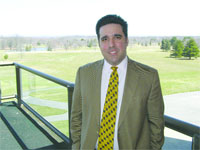 Looking for a Members Bounce