Wilderness Experiences Unlimited Is in the Confidence Business 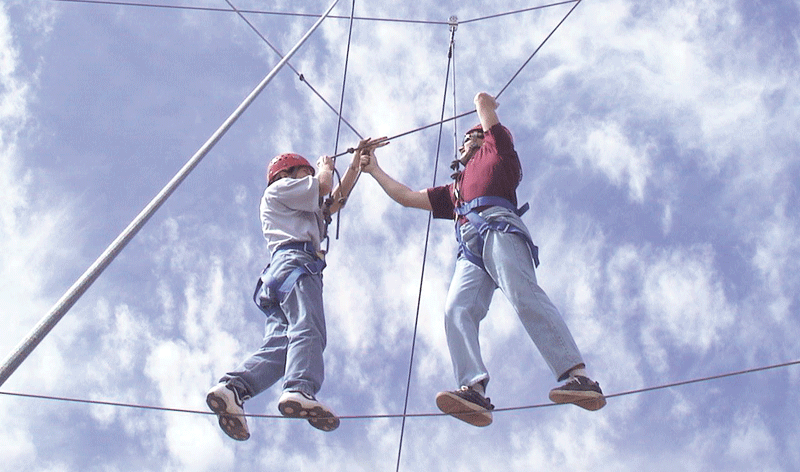 Imagine your child donning a full-body harness and helmet, climbing to the top of a 35-foot wall and rappelling down it; trekking into the woods and learning to track animals; or sitting around a campfire and listening to Native American stories.

These and other adventures, such as kayaking, which take place during the summer camp run by Wilderness Experiences Unlimited in Southwick, are structured to help young people build confidence, self-esteem, and pride in achievement, all while enabling them to gain an appreciation for the outdoors.

“Our youth group adventures are designed to be safe, exciting, educational, and most of all, fun. It is never too early or too late to instill a sense of respect and wonder for the natural environment in children,” said T. Scott Cook, who founded the business 34 years ago. “We use adventure sports as a carrot to get kids outdoors.”

However, the offerings at Wilderness Experiences also extend to adults who want to embark on adventurous vacations.

They can learn to scuba dive in Southwick, then use their newfound skill on a trip to the Cayman Islands or Florida. Or they can choose an exotic destination such as Africa, where they can interact with orphaned animals in the wild that are being rehabilitated, and enjoy other excursions as they make memories that will last a lifetime.

“Play is a value-added necessity in life; it’s fun to have fun, but you have to know how,” he said, quoting Dr. Seuss and adding that he believes people often forget that play is critical to living a balanced life.

It’s something he keeps front and center in his own life. The morning of his interview with BusinessWest, he climbed off his bicycle after a relatively short — at least for him — 30-mile ride.

“I would have gone farther if I didn’t have this meeting,” he said, parking his bike in front a poster that shows his daughter Aubrey carrying a kayak. She shares his love of the outdoors and is a professional tri-athlete who will serve as assistant director of the camp this summer.

An impressive ropes course stands behind the poster — there are huge nets, sky-high poles with a network of lines, an enormous spiderweb configuration of ropes, and features such as the ‘rickety bridge’ and ‘multi-vine’ that were created to help summer campers challenge themselves individually and in groups as they master the course with the help and support of team members.

Meanwhile, an almost-Olympic-size swimming pool in the building on 526 College Highway provides a perfect setting for children and adults to learn to swim. Scuba-diving lessons are also conducted there, and seniors enjoy staying fit in special water-aerobics classes. 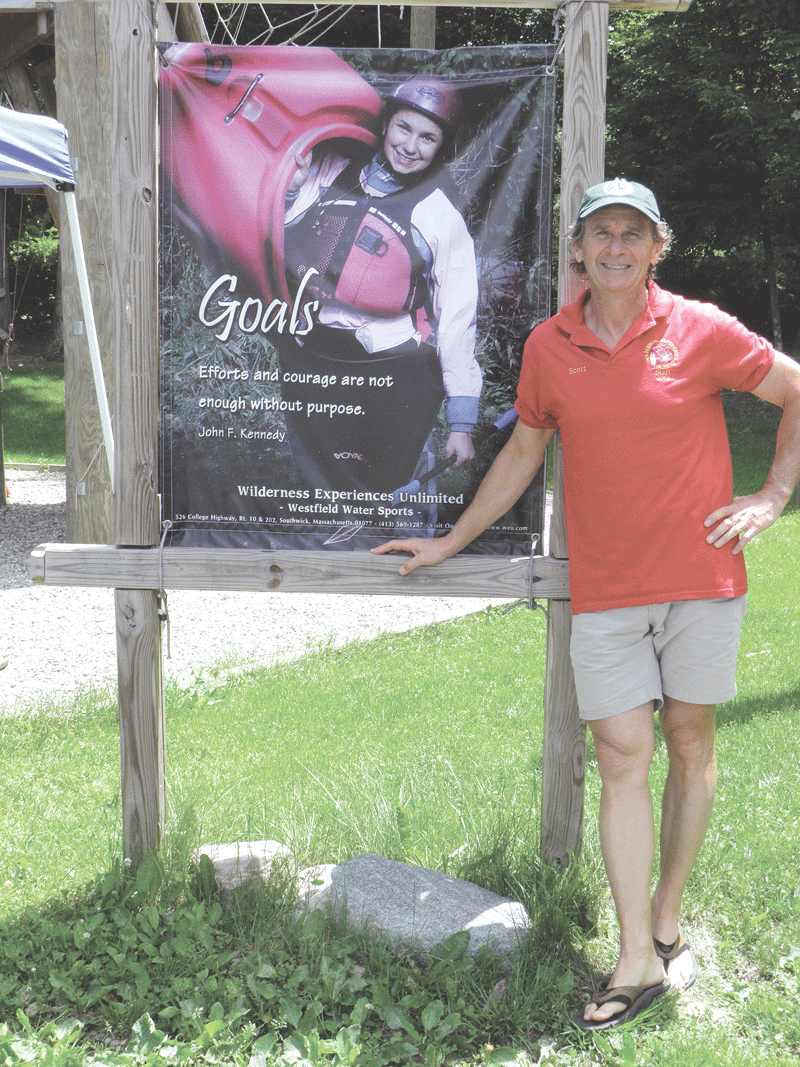 T. Scott Cook believes people forget that play is critical to living a balanced life — and he’s trying to change that.

Over the years, Wilderness Experiences Unlimited has been a tremendous success; the summer camps are so popular, they are filled by January, and the majority of the counselors are former campers who return year after year to share their love of the outdoors.

However, Cook keeps the camp small and accepts only about 50 young people in each session, which runs from Monday to Friday, with overnight programs and field trips for older campers. Although he could easily have grown due to demand, he chooses to remain small so he has the time to get to know each child and be sure everyone has a meaningful experience.

“When I started this, I had been running large camps with 300 kids and 70 staff members, so I really never got to know the campers, or even all of the staff. I prefer to keep it manageable,” he told BusinessWest.

Still, the scope of offerings at Wilderness Experiences has expanded since Cook opened his first camp. At that time, his primary goal was to teach children about the outdoors, help them build confidence by mastering physical challenges, and give them opportunities to learn sports they could continue for a lifetime.

That’s still the goal, but there are now many more ways to embrace and meet it.

Cook’s parents ran outdoor camps when he was young, and he was involved in scouting for many years.

“Playing in the outdoors has always been a big piece of my life,” he said, adding that, in his early college years, he majored in photojournalism but found the career didn’t offer much potential, so he sought out an outdoor-recreation leadership program and eventually earned a doctorate in the field. “I had always worked in summer camps, and when I finished my schooling, I founded Wilderness Experiences Unlimited.”

During the school year, he served as a consultant and worked with children in local school systems who had emotional and behavioral challenges.

“I provided their physical education via an incentive-based program; if their behavior faltered, they were not allowed to participate,” he said, noting that he took them on field trips that included rock climbing and kayaking as well as other outdoor activities they enjoyed. “It was a positive experience.”

After 15 years in that role, he was offered a job running the Wilderness Leadership Program at Westfield State University. He retired from the position last spring, but hosts a special Outdoor Wilderness Leaders program in Southwick for campers ages 12 to 18 who have been recommended by three counselors. It runs year-round, and participants advance through the ranks, volunteer at different organizations, and host their own trips and social events. 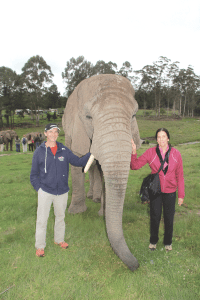 In addition to his offerings in Southwick, Cook has led people on excursions as far away as Africa.

“The goal is for them to learn more about their personal values and core beliefs as well as the way they communicate,” he said. “As they gain confidence, they take younger children under their wing, so it ends up being a very positive place.”

Although not everyone qualifies, every camper gains self-knowledge. “When campers navigate the ropes course, they build their confidence and self-esteem. They have to dig deep inside and share their feelings and emotions because it can seem daunting,” Cook said.

He cited the example of climbing to the top of a telephone pole, then jumping off. It’s a group exercise, and although each camper is carefully outfitted with a full body harness, helmet, and other protective gear, it’s a virtual leap of faith that requires trust in other team members.

“The perceived risk is big, but the actual risk is small due to all of the safety measures in place,” he explained.

Every camp session contains an aquatics segment. “The campers do some type of swimming, whether it’s in our pool or in a mountain stream where they get to know the natural world better. We also take them to state parks to explore the outdoors and go on hikes and play outdoor games,” Cook noted.

His joy in introducing campers to the outdoors has never diminished.

“If a child goes for a walk in the woods and understands nature and learns how to track animal behavior, the woods don’t seem as overwhelming; we present it as a story, a habitat with living things,” he explaned. “When you understand something, it’s easy to respect it, and when you respect it, it’s easy to love and value it. And if you introduce kids to things they have fun doing when they are young, they are likely to continue to play as adults and enjoy their lives. People who recreate have goals and reasons to stay fit.”

Each camp session also contains a spiritual element, which is focused on the way young people view nature. “When they’re outdoors, they are part of a circle of life, and we have campfires where we tell Native American stories of days gone by and how these people perceived the world around them,” Cook said. 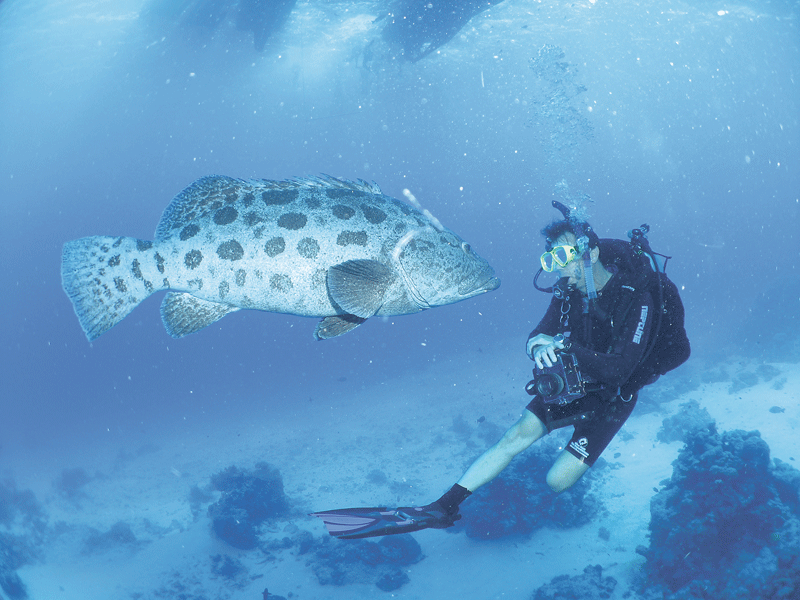 One program of Wilderness Experiences Unlimited teaches participants how to scuba dive, then arranges trips to Florida and the Cayman Islands to help them enjoy that new skill.

Wilderness Experiences began selling sporting goods years ago, and the Cooks eventually purchased Westfield Water Sports in Southwick and combined it with their own small retail operation.

The acquisition allowed them to bring scuba diving into the mix because the store sold scuba gear, and it was then that Cook built a pool where he could conduct diving and swim classes, and later added the ropes course.

Prior to the acquisition, Wilderness Experiences Unlimited had operated out of a number of sites, including Huntington and a variety of spots in Westfield. But location has never been a critical ingredient in the camp’s success.

“It doesn’t take an amazing property to make an amazing camp — it takes amazing people,” Cook told BusinessWest. “All I needed was a place where I could launch adventures from.”

He closed the retail end of his business in January, and New England Bike moved into the space and took over the scuba operation. “My wife Laura and I both had careers, and we were running two businesses,” he noted, adding that she was a nurse at Shriners Hospital. “So we left the retail side and can focus now on what we love best — the pool, our summer camps, and our travel business, which Laura launched about 20 years ago.

“We’ve always traveled, so we take people to our favorite locations around the world,” he went on. “We’ve hosted trips on every continent except Antarctica, and we’re going there in 2017.”

The focus is on visiting historical and cultural sites, but participants are also taken off the beaten track so they can see what life is like in small towns. “We may spend as much time in someone’s personal wine cellar having a six-hour meal as we do at a tourist attraction.”

There is an adventure component included in every trip, and excursions have included whitewater rafting on the Zabezzi River in Africa and diving to see great white sharks.

“On one side trip, we met orphaned juvenile lions under age 2 and went for a walk with them. Once they are grown, they stop having contact with people and their offspring are released into the wild,” Cook noted, adding that they have done the same thing with young elephants and giraffes at responsible rehabilitation facilities.

Cook firmly believes that play is a necessary component in a balanced life. “But many adults get distracted. They’re busy working, being a good parent, and watching their children play sports, so they don’t take the time to have fun themselves,” he said.

He and his daughter have been traveling around the world for years to compete in national and world-championship triathlons, and he made sure she became acclimated to the outdoors at an early age. “She spent three nights living in a tepee with me during her first year of life,” he said.

Although he realizes that’s far more than most people want to do, his mission at Wilderness Experiences Unlimited remains unchanged.

“It’s a place where people of all ages can face their fears and accomplish things they didn’t ever think they could do,” he explained. “We hope to continue to open up new worlds for young people and adults.” n