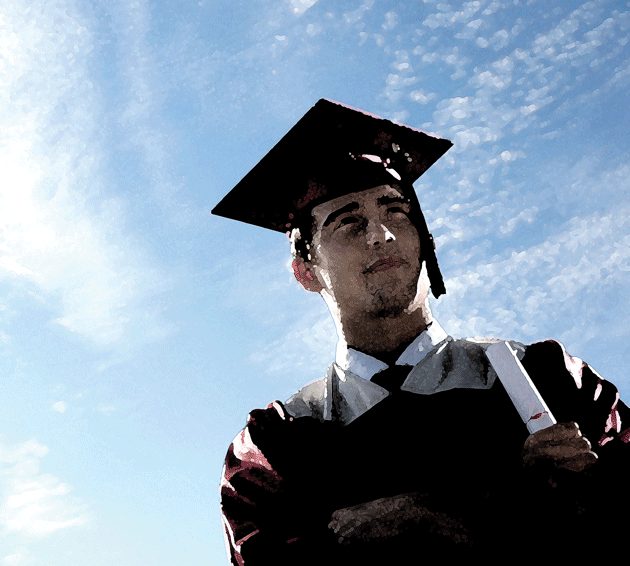 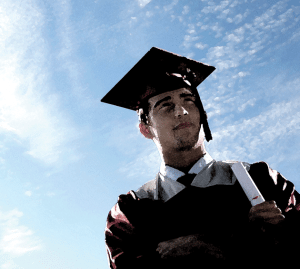 They entered law school just as the economy started to collapse and the legal field began to downsize in dramatic fashion. The members of the Western New England University School of Law class of 2011 knew early on in the pursuit of their degree that the job market wouldn’t be healthy when they graduated, and thus they are not surprised by what are generally meager prospects. Some have managed to find quality jobs, but many are looking at an immediate future clouded by question marks.

Peter Meggers described himself as one of the fortunate ones … and then quickly tacked on an adverb to punctuate that assessment.
“I’d guess I’d say I’m one of the extremely fortunate ones,” said Meggers, a member of the class of 2011 at the Western New England College School of Law, who will soon be carrying a business card that identifies him as an associate with the Hartford-based firm Halloran & Sage.
He told BusinessWest that he’ll be handling a diverse mix of duties, but probably a steady diet of insurance defense work to start, and will be earning a salary that exceeds expectations grounded mostly in anecdotal evidence about what he would likely find in the job market.
Much of that evidence came in the form of commentary from friends of colleagues who are simply not as fortunate as Meggers, and whose job-search results would more closely resemble the norm than the exception. 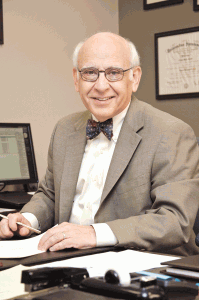 Art Gaudio says the laws of supply and demand clearly indicate a need for fewer law-school graduates for the foreseeable future.

“From what I hear, not everyone is having much luck,” he said, referring to classmates. “It’s pretty grim out there right now.”
Melanie Stevens, another of those in the ‘fortunate’ category, agreed. She has a job waiting for her at the Portland, Maine-based firm Friedman, Gaythwaite, Wolf & Leavit pending her passing the Maine bar exam. But most of her classmates are not faring as well.
“From what I’m hearing, it’s awful out there,” she said. “There are no jobs, and when you do find a job, the firm wants attorneys who have experience. I don’t know many people who have been able to find a job.”
Art Gaudio, dean of the law school, says he probably won’t have a very clear picture of just how the latest graduates of Western New England College School of Law are faring in their search for employment until next February. That’s when the results of a survey of that class, detailing where they are working and in what capacity, should be in. (The school waits nine months after commencement for this exercise because history has shown that this is a suitable timeframe to give graduates time to pass the bar and conduct a job search.)
But he has a pretty good idea what that survey will show.
Indeed, he predicts only slight improvement after this past February’s results, which revealed that 77% of all graduates and 83% of survey respondents had found work in the legal field. (When times are better, that first number is closer to 90%).
This modest trend northward shows that, while the recession is technically over, recovery has been slow, and many businesses still lack the wherewithal or confidence (or both) to add employees, said Gaudio, adding that law firms of all sizes fall into this category. Meanwhile, if firms are hiring, they are generally being more selective about who they bring on, simply because they can, with many experienced lawyers looking for a job, or a better one, after industry-wide downsizing at the height of the downturn.
As a result of all this, the employment picture remains fuzzy not merely for the class of 2001 but for the foreseeable future as well — so much so that the law school is cutting admissions for next fall by 20%, from 125 down to 100, a move consistent with what other institutions are doing, Gaudio continued, adding that the simple laws of supply and demand dictate such action.
“At least for the short term, the need for lawyers is down, and the faculty here is taking a proactive stance on this,” he said. “We’re going to reduce the number of people we’re admitting, at least for now, and the reason is what’s happening on the demand side. Why should we put out lawyers who can’t get jobs?”
Similar reductions have come during other severe economic downturns, Gaudio told BusinessWest, citing the early ’80s and early ’90s as examples. The duration of these challenging periods varies, he went on, but this one will likely be longer than normal because of the severity of the economic turmoil and the decline in demand for a number of legal services, from real estate to business transactions to simple wills, which people are apparently content to put off until their economic situation improves.
Eventually, though, the job market will bounce back, said Gaudio, as the economy inevitably improves and, perhaps more importantly, the huge numbers of Baby Boom-age lawyers begin to retire in large numbers.
For this issue and its focus on law, BusinessWest talked with several members of the class of 2011. Most of these individuals have jobs with firms or attractive clerkships lined up, but collectively, they relate a story of a still-lackluster job market.

Offering Testimony
Those who donned caps and gowns for ceremonies at Springfield Symphony Hall on May 21 began their journey through law school in September 2008, or just as the bottom was falling out of the U.S. economy.
By then, the stock market, which was still above 12,000 in early June, was moving south of 9,000 and seemingly losing a few hundred points a day. Financial giants were either going under — Lehman Brothers, for example — or getting bailed out by the federal government, like AIG.
The Great Recession that ensued took its toll on virtually every sector of the economy, including the legal profession, as firms of all sizes responded to sharp reductions in real-estate, transactional, and corporate work by laying off staff, cutting salaries, and imposing formal and informal hiring freezes.
Matters were worst for the class of 2008, said Gaudio, noting that, by the time they’d passed the bar, the job market was in tatters. Things weren’t much better for those graduating in 2009, but there was some improvement for last year’s class, and the needle continues to move in the right direction, but in modest increments, and certainly not fast enough for many of this year’s class.
With no hard data on the class of 2011 coming for another eight months, Gaudio based his projections for the most recent graduates on the experiences of the class of 2010 and commentary from several sources, including the National Assoc. of Law Placement, that matters are slowly improving.
“Many of them [members of the class of 2010] were able get jobs, and the kinds of jobs they were looking to get, but there just weren’t as many as in the past,” he said, again speculating that this year’s graduates will fare slightly better.
But testimony from some of the fortunate ones would indicate that, while the market may well have improved, finding a good job takes persistence, a varied résumé, and a little luck as well.
Meggers took what in better economic times would be considered a typical route to his job at Halloran & Sage, which has a number of offices in Connecticut. He applied at the firm at the beginning of his second year, and earned one of three highly sought-after summer associate’s positions. A month after that 12-week assignment was over, he was offered permanent employment.
For most members of his class, it’s been a longer, harder search, and one that is likely just beginning. “I’d have to say that only a small percentage of people in my class have solid jobs right now, and many of those who do have jobs had to settle for something less than what they wanted.”
And this has left more than a few second-guessing their decision to go to law school, he continued, adding that many members of his class have large amounts of debt and earning potential (for the immediate future, anyway) that doesn’t justify the advanced degree.
Stevens had a similar assessment.
“Most people I know don’t have jobs and don’t know what they’re going to do when they pass the bar,” she told BusinessWest, adding that many are already looking for work outside the legal field. “Everyone’s fear is that loans are going to come due in the fall and no one’s going to be able to pay them.
“Everyone thought that, if you went to law school, you’d have job offers — and that changed very quickly over the last years,” she continued, adding that while most are not surprised by the sluggish job market, they are nonetheless disappointed. “It’s scary right now; there are just no jobs. And that made commencement somewhat bittersweet; people were happy to be done with law school, but in the back of their minds they’re wondering where they’re going to find something and when.”
Rob Preziosi is another of the fortunate few. He’s been accepted into the Army Judge Advocate General (JAG) Corps, and will be attending JAG School in Charlottsville, Va. perhaps as early as next February. But while his path is clear, most of his classmates are confronting question marks.
“Unfortunately, I know of plenty of smart, capable colleagues that simply have no prospects,” he said.
Robin Gallagher, who has secured a clerkship in the Federal District Court in Hartford and is quite content with that assignment, said that, in this tough job market, those faring well, or at least better, managed to diversify their experiences in law school.
“Those who participated in a number of areas, like Moot Court, Law Review, externships [as she did, in Federal Court in Springfield], and public-interest opportunities, are the same ones that are finding jobs,” said the South Windsor, Conn. resident. “Some people are disappointed with the job opportunities that are out there, but I’ve found that the people who took greatest advantage of the opportunities available in law school are the ones finding work now.”

Degree of Difficulty
For the longer term, the job prospects for recent law-school graduates will eventually improve, said Gaudio, noting that, while the recession may push back the retirement date for many Baby Boomers in the legal profession, members of that large constituency will ultimately move on.
“And we’ll need to replace those people,” he continued, putting himself in that category, having graduated from law school 44 years ago. “Eventually, I think there’s going to be considerable improvement on the demand side.”
For now, though, good jobs are at a relative premium, and for many members of the class of 2011 — those outside the ‘extremely fortunate’ category — it may be a while before they can put to use those skills they’ve acquired over the past three years.