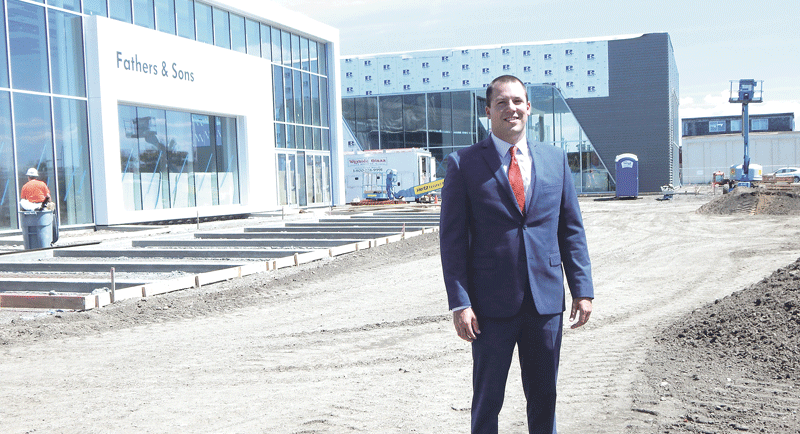 Mayor William Reichelt says West Springfield is a small town that in many ways assumes the character of a city, due in part to the popular retail establishments — stores and restaurants — that line its two main commercial corridors, Riverdale Street and Memorial Avenue.

Indeed, the traffic that passes along these stretches each day makes them such an ideal location that little commercial space remains. When parcels do become available, they move quickly, and right now, more than $34 million in new construction is underway along the two thoroughfares.

But that economic development has been balanced by efforts initiated by the new mayor: Reichelt, a member of BusinessWest’s 40 Under Forty Class of 2016, took office in January and has already streamlined the permitting process and formed new committees and task forces to ensure that the zoning is appropriate, traffic flow does not affect residential neighborhoods, and blighted properties are addressed.

“West Springfield is easy to get to for people coming from the north, south, east, and west, and we have become a cut-through community, so we’re trying to improve the quality of life for our businesses and residents,” he said, noting that the town’s roadways connect Springfield to Agawam; Westfield to Springfield and points farther south; and provide access to Riverdale Street and Springfield for residents of the hill towns.

Reconstruction of the Memorial Avenue rotary on the West Springfield side of the Memorial Bridge, which contains two overpasses on Route 5 to the north and south, was recently completed by the state Department of Transportation under its Accelerated Bridge Program.

It’s an important gateway, which is matched by another one to and from Agawam at the end of the 1.7 mile strip, and last year the town signed a contract with Greenman-Pederson Inc. to create a design that incorporates principles of the Complete Streets program and will accommodate the increased traffic flow expected to occur when the MGM Casino in Springfield is finished.

“Memorial Avenue is expected to become a pinnacle of the Complete Streets plan,” Reichelt told BusinessWest, adding that the Big E is also studying the traffic flow through its property, and efforts will be made to ensure that any work that is done meshes together well.

The cost estimate for the Complete Streets project, which includes repaving the corridor, adding a two-lane bicycle path, updating utilities, and adding new landscaping, is estimated at $15 million, and since it’s more than the town and MassWorks can pay for, officials are hoping the Transportation Infrastructure Program will help fund the project.

“Memorial Avenue is the first view people have of West Springfield when they cross the Memorial Bridge, and we want to make it more attractive,” Reichelt said, noting that two major multi-million-dollar projects are underway along the commercial strip that will further enhance its desirability and likely spark investments by other businesses.

For this, the latest installment in its Community Profile series, BusinessWest looks at what is going on in West Side and the measures being taken to strike a balance between commercial growth and the needs of the town’s residents.

Reichelt said Fathers & Sons is building a new $6 million, 50,000-square-foot Audi and Volkswagen automotive sales showroom and service center on Memorial Avenue. The company’s former Volkswagen showroom and Kia of West Springfield, which it had closed earlier, were demolished to make way for the new facility, which will include two large showrooms and a 23-bay, state-of-the art service area and waiting room with flat-screen TVs, leather couches, and Internet access.

The company expects the new service area to increase efficiency and reduce customer waiting time, and notes that the new Audi store will free up space at the Fathers & Sons dealership on 989 Memorial Ave., which will sell and service Volvo vehicles exclusively once the new facility opens.

The town has never undertaken a comprehensive review of its zoning, and we want to make traffic flow and the use of property in our commercial areas harmonious with the rest of the town.”

The project is expected to create 20 new jobs, and Reichelt noted that the city approved a five-year tax-increment-financing deal with Cartelli Realty LLC, which owns the Fathers & Sons site. It will provide limited tax breaks on the so-called growth portion of the assessed valuation of the property at 434 Memorial Ave., and town officials hope it will help enhance the corridor’s desirability.

“The new dealerships will bring more business to Memorial Avenue, and we hope it will help it to become the new Riverdale Street. Everyone wants to move their business there (Riverdale Street) because it gets so much traffic, but space along that corridor is expensive,” Reichelt said.

Work is also underway on the grounds of the former St. Ann’s Church, which was sold to the Colvest Group by the Diocese of Springfield about four years ago.

Colvest President Frank Colaccino said the company acquired and combined three parcels, which include the church property, the Bridge Street road closure, and a parking lot behind Clark Paint Factory on 966 Union St., and created a plan to build a one-story, 9,000-square-foot retail structure on the 1.5-acre site that has been approved.

Currently, utility lines on the property are being relocated, work that must be finished before construction can begin.

“It will be a good addition,”Colaccino said. “West Springfield is a great town which is well-perceived; and the new mayor is very capable and gets an A+.”

Colvest recently signed a lease with Florence Bank, which will become the anchor tenant in the new building. The new bank branch will have a drive-through window and ATM, and its current West Springfield offices will be moved into the structure when it is finished.

But it has taken years to ready the site for construction. “The church property was contaminated when we purchased it. The diocese was responsible for cleaning it up, and it has been a process to get it ready for a new building,” Colaccino said, adding that the company is in negotiations with several businesses interested in occupying the 65% of the building that Florence Bank does not need.

“It’s nice to see the church property being reused for a commercial purpose,” Reichelt said, adding that traffic along the roadway is also driven by the Big E, which attracts thousands of visitors every year and can help spur continued growth.

However, new investments are ongoing. McDonald’s held a ribbon-cutting ceremony several weeks ago to celebrate a complete renovation of its 429 Memorial Ave. eatery; and a Chipotle Mexican Grill is in the permitting process and hopes to open next summer in the former home of Jiffy Lube, which moved into a new facility on 788 Memorial Ave.

Growth is also occurring on Riverdale Street, where a new four-story hotel with 92 rooms is in the permitting stage; and scattered improvements are being made throughout the community. The Food Bag on 884 Westfield St. is being remodeled; Arrha Credit Union recently opened on 63 Park Ave. in the former home of Springfield Teacher’s Credit Union; and plans submitted to knock down the Cumberland Farms on Park Avenue and built a new one have been approved.

The town is rife with private investments, and Reichelt is doing his part to facilitate balanced growth; he immediately began taking action to address issues and areas of concern after he was sworn into office earlier this year.

He told BusinessWest that he heard complaints from some business owners about the length of time it took to navigate the permitting process, so in April he kicked off a new program. Today, meetings are held on the first and third Mondays of the month, and business owners and developers meet with a team that includes the mayor, the chair of the planning board, and 11 department heads, which helps iron out difficulties and streamlines the process.

A new, 13-member Zoning Review Committee is also being formed to take a close look at West Springfield’s zoning as well as the zoning in a variety of communities across the state. The group will begin meeting in September and will determine what needs to be done to facilitate growth, while protecting the quality of life in residential neighborhoods.

“The town has never undertaken a comprehensive review of its zoning, and we want to make traffic flow and the use of property in our commercial areas harmonious with the rest of the town,” Reichelt said, adding that the committee will also look at pedestrian crossings to make sure residents are safe.

He noted that to that end, the entire lighting pattern at the intersection of Park and Elm streets was revamped after the 2011 tornado, and new pedestrian crossways were added.

A Blight Task Force has also been formed to deal with the 100 or more vacant or derelict properties in town. Members include the building inspector, two health inspectors, and the town attorney; who take calls from residents in a centralized location about sites that need to be addressed. The mayor told BusinessWest that since the task force was formed, four homes have gone into receivership and three are being rebuilt.

In addition, action is being taken at the former Standard Plating Co. on 964 Main St., which has been vacant since 2011 when it was ravaged by the tornado that swept through the area.

The city worked with the owner to remove contamination at the brownfields site, which is within walking distance of the Memorial Avenue rotary. The building has been razed, and when the environmental cleanup is complete, the Redevelopment Authority will take possession and build a new commercial structure there.

West Springfield also plans to apply for a $1.5 million MassWorks grant for a new pumping station and an extension of the sewer lines along Route 5.

“There are five properties near the river, including a large car dealership, that have septic systems right now,” Reichelt said, noting that the pumping station was built when Riverdale Plaza consisted of a drive-in movie theater and airport, and the area occupied by Costco was farmland.

He added that Agri Mark on Riverdale Road is also building a new processing plant. “They’re making a $10 million investment in West Springfield,” the mayor said.

Although a significant amount of new construction is taking place in West Springfield, balance is critical to the town’s future.

“If you leave the business corridors, you find neighborhoods and two schools in the Merrick section of town,” Reichelt told BusinessWest. “Union and Main streets are walkable areas that contain small businesses, and as you move up the hill you encounter the residential subdivisions that have grown up over the past 20 to 30 years.

“There are a lot of commercial projects underway, and we benefit from being the crossroads of New England, but the town is also a great place to live,” he said. “We’re community-oriented and have active groups that range from the Tree Committee to the Garden Club, so we are careful not to forget about our residents.”

Which makes West Springfield far more than an address for the Big E and two busy commercial strips that have become a destination due to the large number of retail establishments and eateries that flourish there.

It’s also a community that residents and businesses alike love to call ‘home.’