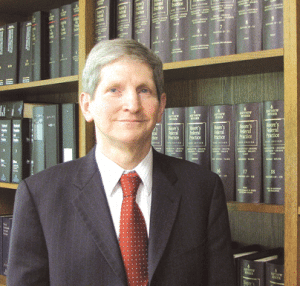 Don Holland says most people don’t realize that a patent application in the U.S. can be a long, tedious process, taking on average three to five years. It’s more believable when one considers the sheer volume of existing and potential patents.

For example, back in the 1970s, Holland — who has an aerospace engineering degree in addition to his law degree — was employed at the U.S. Patent and Trademark Office, working on rotary pumps and turbines for jet engines.

“It’s amazing to think there are 230,000 patents in that area alone,” he told BusinessWest — representing a tiny sample of all the patents issued by the U.S., across all industries.

It doesn’t help, he added, that patent examiners almost always reject an application on first submittal, because they want to build a record of diligence and avoid the impression that they’re not doing their job. “So it’s not a smooth road.”

But it’s a fascinating one for Holland, who left the Patent Office in 1981 to launch his own intellectual-property law firm. He was joined in 1989 by a partner, Mary Bonzagni — a former student from his teaching days at Western New England College School of Law — to form Longmeadow-based Holland & Bonzagni.

Although they’re registered as ‘patent attorneys’ (the only term technically allowed by the American Bar Assoc.), their work runs much deeper than that, encompassing patents, trademarks, copyrights, trade secrets, product licensing, litigation, and general counseling — in other words, just about anything a client needs to bring new products to market and then zealously safeguard those products.

“In this field,” Holland said, “I like to say that nobody dies, and nobody goes to jail. Instead, you do everything you can to help clients succeed with their products and services without impediments from copycats.”

He detailed one memorable case involving a manufacturer of household items who took action against Christmas Tree Shops. The discount chain had bought seconds from the client one year, then wanted firsts at seconds prices the following year. When the client refused, the chain commissioned Asian manufacturers to create cheaper knock-offs of his products.

Holland & Bonzagni did some investigating, then assembled a team of sheriffs to seize 117,000 items from the stores to assess the level of damage to the plaintiff. Within six weeks, Christmas Tree Shops ceased its knockoff sales, wrote the plaintiff a six-figure check — and then became its best customer.

Another high-profile case involved Yankee Candle, which successfully sued New England Candle Co. for copying the look of the Yankee Candle storefronts at its Enfield store.

Those types of cases might make news, Holland said, but they only scratch the surface of a broad palette of services — and a rich education in intellectual-property law — that the firm brings to its clients. For this issue’s focus on law, BusinessWest sat down with Holland to learn more about a field that continues to challenge and gratify him today, 33 years after taking on his first client.

The firm has expanded its client base significantly since then, he noted, working with between 100 and 200 companies every year and dealing with patent and trademark issues in between 50 and 75 countries.

“We’re no different than any other intellectual-property firm,” he said. “Most patent attorneys are either engineers or have strong science backgrounds. Recently, there are patent attorneys who are computer programmers, too. I’m an aerospace engineer, and Mary is a chemist.” In fact, she was working with a solid-waste management firm on a sludge-recycling project in Detroit when she started to consider other career paths for her organic-chemistry background, and pursued her law degree at WNEC.

The firm’s clients are generally industrial corporations, both foreign and domestic, and include manufacturers of aircraft, food, paper products, biomedical equipment, computer software, chemicals, electronic components, and other high-tech items. It also services chains of restaurants, hospitals, and other businesses. Bonzagni does a good deal of work for paper companies, including one area firm that makes security threads for currency.

“My work is 50% trademark work, which is a lot of fun,” Holland said, adding that the firm has a long-standing policy of representing only companies it admires, from regional names like Yankee Candle and Friendly’s to much smaller firms. “We’ve said we don’t do work for anyone we don’t like, and we stand by that. Early in our practice, we wanted to work for people we respect and enjoy, and that’s what we still try to do.”

The first step in trademark work, he explained, is determining which brands are the most sacred to a company — “the brands a company would be ticked if someone else copied.” Why not protect all of them? It comes down to budget, as each action costs money and time.

“If you say, ‘you have 40 trademarks, and you need to register all of them,’ you’re not going to get the work,” he said. “They don’t want to spend that kind of money. Typically, you take a look at the top three to five trademarks, and analyze which can be protected and to what extent. We suggest to them which marks should be registered.” Trademarks, he added, are applied to products, and service marks to services.

This work to protect trademarks becomes critical when another company copies a product name or look.

“If a client has registered its name and the registration has become incontestable, that’s one half of the lawsuit; you don’t have to prove who owns your name,” Holland said. “So when you go to court, you’ve already proven one of two things. The second is whether someone has infringed that trademark, or has used a mark confusingly similar.” Generally, consumers are surveyed as part of the legal action, and if 35% of them are confused by the similar names or logos, the plaintiff has proven his case.

Litigating a trademark violation can take one to three years and cost upwards of $200,000, but patent litigation ­— a claim that a company has copied a patented product design — can be much more involved, lasting four to eight years and costing between $500,000 and $2 million, depending on the type of case and the parties involved.

Beyond litigation and consulting with clients on how to bring their products to market and grow their business, education is a large part of Holland & Bonzagni’s mission.

After teaching intellectual-property law for 23 years at WNEC, Holland now teaches in the Paralegal Studies program at Bay Path College. “I have  a lot of fun teaching,” he said. “My patent professor was able to get a patent job for anyone in class who wanted to go into the patent profession, so it has been my pleasure to teach students about the fun and rewards of being intellectual-property attorneys.”

The firm also presents seminars on a number of subjects in the broad realm of trademarks, trade secrets, counterfeit goods, licensing technology, Internet piracy, and more.

“We have 10 different seminars tailored for different clients, which we give at no charge after we establish a relationship with the client,” he said, before adding, “I typically will tell the owner or president of the company that there will be no charge for the seminar — if somebody will give me a tour.”

Holland has also authored a booklet titled Corporate Guide to Patents, Trademarks, Copyrights, and Trade Secrets, and the firm posts industry news on its website, www.hblaw.org. Currently, visitors can read about the America Invents Act passed by Congress last year that shifts the U.S. from a first-to-invent to a first-to-file system, meaning only the first person to file a patent application can receive a patent, unless the first inventor publicly disclosed the invention beforehand and filed a patent application within 12 months after that disclosure.

In other words, there is no longer a one-year grace period for an inventor to keep an invention totally secret before deciding to file a U.S. patent application. Someone with knowledge of the invention could conceivably beat the earlier inventor to Patent Office and prevail.

“A lot of companies don’t know this until they’ve been burned,” Holland said. “Under the old system, you had a grace period. Now, if you’ve invested $2 million, $3 million, $5 million in a product, competitors could copy the product and don’t have to spend the millions you did in research and development.”

Other challenges exist for inventors, he added. For instance, there’s no such thing as a worldwide patent, meaning if someone wants to market a product in, say, Europe, Canada, and Australia, they need to pay separate fees and go through individual processes in each country. Fortunately, 2015 will see the emergence of a single European patent, covering most European Union members and reducing filing costs by more than 75%.

Meanwhile, the Internet age has produced its own raft of trademark issues, including the practice known as ‘typosquatting,’ where someone will create a website almost named after a real company — www.smythandwesson.com, for instance, with the ‘i’ replaced with a ‘y’ — to draw in users who misspell a URL.

Back to the Drawing Board

Holland continuously came back to how impressed he is with the clients he works with, and how much he learns from them.

“People are brilliant at what they do, but sometimes too humble to recognize it,” he said, citing as one example the man who created the x-ray arm that moves around a patient. “Previously, the table moved. His invention is now in 5,600 hospitals.”

Then there’s another favorite client, a company that claims roughly 10% of the U.S. market share for beef. “It was fun going out to visit them and represent them in all sorts of trademark matters and patent matters.”

When it comes to fascinating clients, however, “everyone has them,” he told BusinessWest. “I’m not alone. Go to any intellectual-property firm, and they have clients as good as ours or better.”

And, as a general rule, those clients are not in the mood for lengthy legal battles. They just want to get on with their business.

“Some law firms are all about wins and losses,” Holland said. “But I’ve learned that our clients just want to solve a problem and move on to the next matter. They just want to sell their product or service and not get involved in a lawsuit.”

He laughed when he recalled his fastest-ever litigation, a copycat case where the documentation was clear and the case was settled in two weeks — and the defendant ended up purchasing work from the client. Most cases are much more complex, keeping the staff at Holland & Bonzagni — which also includes two paralegals and four support staff — busy.

Holland said the firm wants to grow, but it’s difficult to get lawyers to commit to Springfield. “We’ve been looking for three or four years. If you graduate law school, do you want to go to Boston or New York, or Springfield? Unless you grew up here and know how great the area is, it’s tough to see it.”

So hiring, like patent law, isn’t a smooth road, either. But it’s all part of the challenge for an engineer and a scientist who found, in the broad realm of intellectual-property law, a far more satisfying path. n 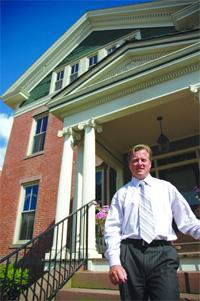 College Graduates to Find a Fertile Job Market, If…