The former Westinghouse Electronics complex in East Springfield was slated for redevelopment into a large retail Mall, with perhaps two dozen stores, but then the recession sent that sector into a deep tailspin and eventually scuttled those plans. The O’Connell Development Group, creator of Holyoke Crossing in Holyoke, among other area retail complexes, acquired the property last fall, and is advancing plans for a mixed-use facility — although there is uncertainty about what that mix might entail.

As he talked about the sprawling former Westinghouse Electric manufacturing complex off Page Boulevard in East Springfield, and the prospects for redeveloping it, Andrew Crystal drew a number of comparisons to another project orchestrated by the Holyoke-based O’Connell Development Group, which he serves as vice president.
That would be the transformation of the former H.B. Smith boiler plant in the center of Westfield into a massive Stop & Shop supermarket and accompanying parking lot.
“That was a large industrial site that was demolished, cleaned up environmentally, and then turned into a retail location,” said Crystal, adding that this is the plan for the Westinghouse site, located just off I-291, as well. Actually, it’s been the plan for some time, and the fact that the 40 or so acres in question are still home to several buildings in the process of being razed points up a big difference between this initiative and the one in Westfield.
The H.B. Smith project unfolded in 1997, when the economy was humming and most major retailers were in an aggressive expansion mode. A planned transformation of the Westinghouse site into a $45 million retail complex with a mix of stores, undertaken by Newton-based Packard Development, was put on the drawing board more than three years ago, or just before the start of the worst recession in 80 years.
That downturn prompted the closing of thousands of retail establishments across the country and back-burnered a number of projects like the Westinghouse endeavor, said Crystal, adding that, while the retail sector is still reeling from the downturn in many respects, that segment of the economy is expected to eventually recover. Meanwhile, the Westinghouse complex has that most precious of real-estate qualities — location.
These factors and others prompted O’Connell Development, one of the O’Connell companies, to acquire the complex for $4.2 million last November and quickly commence with the process of razing the many buildings and cleaning up environmental contamination. 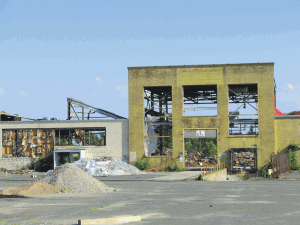 Andrew Crystal says retail is one promising possibility for the site, although the sector isn’t as healthy as it once was.

“We think the site has a lot of potential, and clearly some of that is for retail uses,” he said, “because it is within a fairly dense residential area and has such easy and immediate access to 291. That access accounts for much of the site’s appeal, but there’s also the visibility from the highway.”
For this issue, BusinessWest takes an indepth look at the prospects for the Westinghouse property, identified as one of the key economic-development priorities in the City of Homes and a big piece of the ongoing revitalization puzzle.

Back to the Future
In its heydey during World War II, the Westinghouse Electric complex, opened in 1915, employed as many as 7,000 people in the manufacture of white goods and other products. The plant was part of a large industrial corridor where Rolls-Royces were once assembled and Smith & Wesson later became a huge part of the landscape.
The Westinghouse operation eventually wound down in 1970, and since then the cluster of buildings has become home to a number of warehousing and distribution tenants, said Crystal, adding that the site has long been considered an attractive location for a retail center, given its size and location only a few hundred yards from the East Springfield exit off I-291.
And in early 2008, Packard Development, a subsidiary of New England Development, which has developed a slew of retail centers across the Northeast, including several in Eastern Mass., put plans on the table for such a center, one that would be home to perhaps two dozen stores and a total of 450,000 square feet of retail. Formal plans were submitted, an environmental impact report was filed with the state (addressing, among other things, traffic issues), and the company met several times with neighborhood residents to hear and address their concerns.
All systems appeared go, but then … the recession hit, and the East Springfield project, like many planned retail developments, was first delayed and then scrapped.
“New England Development is a good firm, and they had a pretty aggressive development plan — they just got caught by the recession,” said Crystal. “It was a time when even the big national retailers were pulling back, and some didn’t make it through the recession; there were many casualties.”
But O’Connell saw enough potential in the property to make that $4 million roll of the dice last fall, said Crystal, adding that he considers this property to be a gamble well worth taking, considering the site’s size, location, and potential for a number of possible uses.
Crystal told BusinessWest that demolition will likely be concluded by the end of this year, clearing the way for what he calls mixed-use development, “although, at this point, we’re just not sure what that mix of uses is or would be.”
The property is zoned commercial, he continued, adding that this designation doesn’t permit some specific uses, such as a large distribution center, but does allow almost all others.
Retail is certainly at or near the top in terms of preferred uses, he said, adding that there is a recognized need for more retail in that part of the region, and dense population centers within a few miles of the site that could be attractive to major players in the industry.
But retail is still in a relative holding pattern overall as a sluggish recovery from the downturn continues, and Crystal acknowledged that many questions remain about when and to what degree the sector will bounce back.
“Retail is doing better than it was a year or two ago, certainly,” he said, “but it’s not like it was five years ago, and it likely never will be again. There are fewer national retail tenants now — the bankruptcy filings provide ample evidence of that — and the sector is still making its way back. Things are better, and consumer confidence has improved tremendously, but it’s certainly not like it was.”
The O’Connell Development Group has extensive experience in retail development, with several such projects in its portfolio, including the Westfield Stop & Shop initiative; Holyoke Crossing, its best-known retail effort, and one that has certainly felt the impact of the downturn; the Bernie’s store across Whiting Farms Road from Holyoke Crossing; and several CVS locations across the region.
Meanwhile, the company continues its work to redevelop the former Atlas Copco property just a few blocks from Holyoke Crossing and the Holyoke Mall into a retail facility; it is currently being used for distribution.
But there are several other potential uses for the Westinghouse site, said Crystal, listing everything from office space to health care services; from entertainment venues to a satellite post office. All are permissible uses under the zoning, and all are viable alternatives given the location just off the highway.
In the meantime, O’Connell is working to lease out space in the Westinghouse office facility fronting Page Boulevard, which is not slated for demolition at this time. Approximately 30,000 square feet across two floors is leaseable, said Crystal, adding that the company is still gauging demand for that space while deciding its ultimate future.
Marketing of the site will commence once O’Connell has a firmer grasp of just what it wants to do with the location and what the market will bear, said Crystal, adding that the site simply has too much going for it to remain dormant for long.
“You just don’t find close to 40 acres in an urban environment like this,” he said, “that has such close proximity to the highway and such high visibility from the highway.”

The Bottom Line
The H.B. Smith project succeeded in changing the look and feel of downtown Westfield. It removed a decaying, contaminated factory complex and brought retail — and some vibrancy — to the downtown.
Whether history will repeat itself in East Springfield remains to seen, but Crystal is optimistic that another location known mostly for what transpired in the past will have a different, and quite compelling, future.