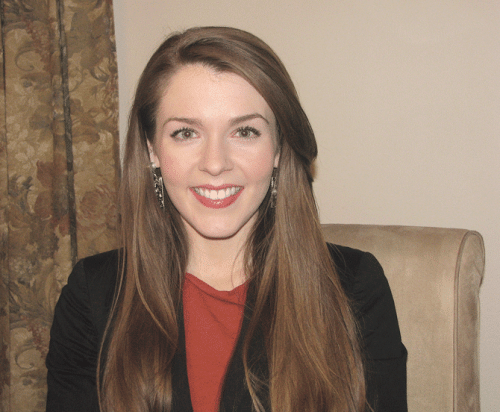 Briana Santaniello can trace her interest in the pharmacy profession to an article in the local press about a local pharmacist working for Baystate Health, which her mother showed to her when she was 16 and contemplating what to study in college.

“She said, ‘you’re strong in math, you’re strong in science, you’re good with people … have you ever considered pharmacy?’ I hadn’t, and at the time, I was looking at college programs, and there weren’t any pharmacy colleges around here — and I really wanted to stay in Massachusetts.”

But a few months later, she came across a postcard announcing the launch of the Western New England University College of Pharmacy. By this time, she had thoroughly researched the field and decided it was for her. “The timing was perfect.”

That’s how Santaniello, in the fall of 2011, joined the very first class of pharmacy students at WNEU. Of the first cohort of 75 students, 69 graduated last spring and have found a diverse assortment of jobs, both in Massachusetts and far away, according to Evan Robinson, the college’s dean.

“Pharmacists are in demand,” Robinson told BusinessWest. “We have an aging population, which is going to tax the healthcare system. And we have a healthcare environment in which patients have to be more independent and autonomous more than ever before. To that end, the community pharmacist is a valuable partner and a valuable contributor to patient care and patient outcomes. For those reasons, I think there’s a very sunny future in this field.”

Those signals were already becoming evident when WNEU made pharmacy its fifth school in 2011, and earned an important accreditation from the Accreditation Council for Pharmacy Education last spring.

“One of the reasons Western New England made the decision to open a School of Pharmacy was that we recognized strong job opportunities in a health profession with strong upside — one where people are able to really help others get better,” Robinson said.

In fact, he has long touted the school’s philosophy of “pharmacist as educator,” recognizing that clinical pharmacists are often a key link between patients and doctors, and sometimes the only professional an individual with a health concern may talk to.

“That’s not to say we’re not linked to the product — the product is key to our profession — but, beyond that, pharmacists really have an opportunity to be teachers of patients or their allied health partners in patient care, and serve as that therapeutic expert, if you will, working to help people feel better and move quality patient outcomes.”

Or, in Santaniello’s case, work in a managed-care setting in the Clinical Pharmacy Department at UMass Medical School in Worcester. Under the umbrella of the Commonwealth Medicine program, she helps provide services to a variety of clients, from MassHealth to Health New England, using population-health statistics and other evidence to help clients make coverage decisions. “It’s always changing, with new kinds of drugs and price changes,” she said. “Every day is different.”

Statistically, pharmacy is a broad field with much potential for career seekers. The U.S. Bureau of Labor Statistics projects 14% growth in jobs between 2012 and 2022, an increase of 41,400 positions. The annual median wage for pharmacists is more than $116,000.

“The pharmacy job market is showing some rebound, so that’s been good,” Robinson said, citing a recent wave of pharmacy-school openings and the recent sluggish economy as recent negative factors that, hopefully, will prove temporary. “It’s never been bad by any stretch of the imagination, but it tends to fluctuate.”

Grant Stebbins, another 2015 graduate, had previously enrolled in the Pharmacy Technician program and was working as a tech at Baystate Medical Center, but after a few years there, he decided to return to WNEU for his PharmD degree. Today, he works at Holyoke Medical Center in a role that greatly influences patient care.

“It’s not like a retail pharmacy; we don’t dispense to people who come in off the street,” he told BusinessWest. “We serve the inpatients in the hospital; we monitor antibiotics and other high-risk therapies, go on multi-disciplinary rounds with doctors and other members of the care team from the hospital, a lot of behind-the-scenes stuff.”

And that’s not all. “We interview patients when they come into the emergency room about what medications they take outside the hospital. We also do counseling for a certain population of patients who have heart failure before they leave the hospital, make sure we educate them on the types of medications they’ll be taking. It’s very interesting. It’s not the same thing every day, which is nice.”

While he was never interested in a job in a commercial pharmacy, Stebbins said many of his fellow graduates had jobs lined at drugstores well before graduation. In fact, just over half the inaugural graduating class moved right into positions in retail pharmacies, while others found jobs in hospitals and other clinical settings. Others sought out residencies, from which they may explore more specialized niches in the pharmacy industry, Robinson explained. “It could be pediatric oncology, critical care, acute care, emergency departments.

“Interestingly enough,” he added, “we have two residency programs here at Western New England, one with Walgreens and one with Big Y. The idea is creating an environment in which someone who’s ready to be a licensed pharmacist can learn more about the practice at a high level, in a community-care environment, whether that means some clinical engagement or different types of health and wellness activities.”

Still, Robinson praises the recent class of graduates for taking a chance on a brand-new enterprise.

“We used to joke with them that they’re pioneers,” he told BusinessWest. “They came in with a lot of expectations, a lot of aspirations, and not a lot of tangibles. They took that leap in a new building with no classes ahead of them; we were still hiring faculty. It was a fascinating thing for them. I give them a lot of credit.” 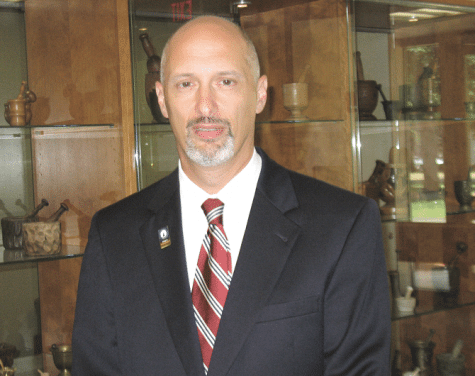 Stebbins said the idea of making a day-to-day impact on a local pharmacy program as one of those pioneering students appealed to him.

“I’d worked with a lot of people would have stayed in Western Mass. if there was a pharmacy school here, but they went out to Worcester or Boston,” he explained. “I’m from the area, and I was interested in helping start something new in the area.

“When I interviewed,” he went on, “there seemed to be a real interest in having students be a really big part of the program. I was on a lot of councils asking for our thoughts on how the process was going. And they had a sympathetic ear; a lot of my friends had an impact on how the program is set up now.”

The initial class that arrived in 2011 has been augmented with a new roster of 75 students each year, bringing the program to around 300 students today. Some jump over from the pre-pharmacy program at WNEU, and others come from outside, with bachelor’s degrees in various fields. The curriculum is designed to produce generalists trained to handle any entry-level position.

The first three years of the program are spent on campus, while the fourth is entirely off campus, with a series of six rotations, each six weeks long, working in the field, guided by pharmacy ‘preceptors.’ That’s where the ‘learners,’ as Robinson likes to call them, start to apply their craft, learning how to fill prescriptions, make IVs, and — of course — educate patients.

Stebbins said those rotations essentially amount to six-week-long interviews, and are a great way for students to make key career connections before they graduate. “I had two rotations at Holyoke, and later, when they had an opening, they called me. I think pharmacy school is unique, in that it’s cooperative programming while still in school.”

There remains some concern among pharmacy leaders over a surge in new pharmacy programs that is producing 14,000 graduates per year after a trend of between 6,000 and 8,000 per year between 1974 and 2003.

Daniel Brown, a professor in the School of Pharmacy at Palm Beach Atlantic University and a nationally recognized thought leader on the pharmacy workforce, understands why those programs sprung up and why they are attractive.

“The pharmacist job market in the 1990s and up to about 2007 was characterized by a significant shortfall of pharmacists, fueled largely by a marked increase of community pharmacy positions in chain stores, supermarkets, and mass merchandisers,” he told Medscape.com recently.

“This made jobs plentiful and caused salaries to rise above six figures, understandably making pharmacists a very hot commodity. The lure of a guaranteed job with a high salary attracted many people to pharmacy, and the growing number of applicants created opportunities for new schools of pharmacy to be established and for existing schools to expand,” he continued, adding that he wonders whether that academic growth has exceeded the need.

Still, the reports of WNEU’s first graduating class of pharmacists finding jobs in a variety of workplace settings is encouraging to Robinson.

“With an aging population and the fact that, in many instances, the community pharmacist is a uniquely accessible and available member of the healthcare team,” he told BusinessWest, an assertion driven home by the fact that more than 3.5 billion prescriptions are written each year, medications are involved in 80% of all treatments, and Medicare beneficiaries with multiple chronic diseases take 50 different prescriptions per year.

One of the pluses of the WNEU College of Pharmacy was its dual-degree track allowing students to simultaneously earn a PharmD and MBA, said Santaniello, who, like Stebbins, relished being among the first cohort of graduates. “A lot of pharmacy schools don’t offer that, and it gave me the chance to be where I am now. I’m very grateful to be one of those trailblazers.”

An MBA certainly makes a pharmacy graduate more attractive to an employer, depending on the field, but employability can still differ depending on what job setting a graduate prefers and whether they’re willing to travel.

“If staying on a traditional career path, they might not easily find a job unless they consider relocating, but there’s so much available to pharmacists now with a doctor of pharmacy degree, as opposed to a bachelor’s degree that limits you to a retail or hospital setting,” she said. “There’s managed care, medication therapy management … the possibilities are endless. People realize the value a pharmacist adds to the mix, and there are plenty of opportunities. You just have to find the niche that works best with your qualities.”

In its 2014 National Pharmacist Workforce Survey, the Midwest Pharmacy Workforce Research Consortium predicted that demographic trends and others — such as the high number of pharmacists, especially men, approaching retirement age — will continue to create opportunities in pharmacy-related careers.

“We’re living in dynamic times as a health profession,” the report notes. “We have shifted from a male-dominated to a female-dominated profession. Male pharmacists will continue to retire in large numbers, given that almost 50% of actively practicing pharmacists who are over 55 years old are male.”

Meanwhile, it adds, “more pharmacists are reporting their pharmacies are providing direct patient-care services. As coordination of care for patients with chronic conditions grows, the number of opportunities for pharmacists in new roles is likely to increase.”

Robinson has noted that fact as well. “This is an important role that benefits patients,” he concluded. “The pharmacist can serve not only as an educator, but an advocate.”