Editor’s Note: This is the latest in a series of stories exploring a surge in entrepreneurial energy across the region and the startup companies that are defining this renaissance. 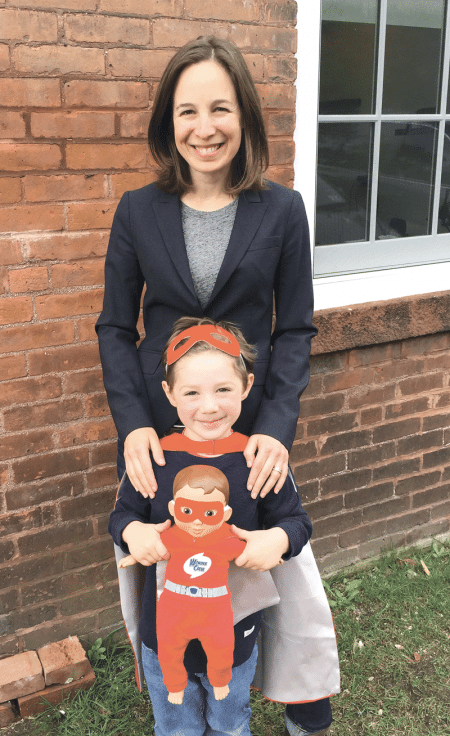 Laurel Wilder with her son, and ‘Will.’

Laurel Wilder says her entrepreneurial adventure started with the note that came home from preschool with her son nearly two years ago.

“It said, literally, that boys aren’t supposed to cry,” said the Northampton-based psychotherapist, who told BusinessWest she was floored by the missive.

“We’re in Northampton, and we talk all about emotions in our household — it’s a completely OK thing to express them,” she went on, adding quickly that, while she was certainly angered by the message, she was forced to conclude that such sentiments are, unfortunately, pervasive. “It’s out there, no matter what environment you bring your child up in … the message is that boys ought to be strong and self-reliant and not vulnerable.”

Her anger and resignation eventually turned to resolve — entrepreneurial resolve — in the form of Wonder Crew, 15-inch-high, soft-bodied dolls that have been created to help give boys the opportunity to build emotional intelligence and creativity.

In that respect, they meet what Wilder described as a long-unmet need, one that society, and toymakers, either didn’t recognize or weren’t in any hurry to address.

Indeed, for decades, if not longer, society has focused on girls and play as a means to build social skills, responsibility, and creativity, and dolls have certainly been at the forefront of that, Wilder maintains. Boys? Well, not so much with any of the above.

“The feeling’s been that the boys are all right,” she said, using that phrase to refer to the status quo when it comes to toys for them — action figures, cars, trucks, sporting goods, and the like — and the attitude that, when it comes to boys, toys don’t have to help build social and emotional skills, connection, empathy, and nurturing.

Wonder Crew starts with a different attitude about play, she said, describing her product as a cross between, or combination of, American Girl doll, action figure, and favorite stuffed animal.

In other words, this is something unique, said Wilder, who believes there is nothing quite like Wonder Crew on the market, and because of that, her concept has enjoyed success on a number of levels this year — everything from sales from virtually every corner of the country to winning $27,500 for her enterprise at Valley Venture Mentors’ first Accelerator Awards last spring; from a ton of press fueled by a surge in interest in boys and dolls to talk of a television cartoon show involving Wonder Crew characters.

“In the toy industry, that’s a pretty incredible opportunity — it gets Wonder Crew’s message out, but it’s also really dynamic marketing,” said Wilder of the TV production, acknowledging that, usually, toys are born from shows, not the other way around, and that this potential development is more evidence of how intriguing the Wonder Crew concept is.

The dolls hit the market earlier this year following a Kickstarter campaign that netted $40,000, enough to create a prototype and commence production.

And as the holiday shopping season enters its final weeks, Wilder is well-positioned to capitalize on the media attention given to her product, and that larger issue of boys, play, and dolls. She’s in several local stores already, and early sales have been positive.

For this issue, BusinessWest continues its intriguing series on the wave of entrepreneurial energy in the region and surge in startups with a look at a unique toy born from a desire to take play to a higher, more important level, and remove the stigma attached to boys and dolls.

Wilder noted that, while the name on the product’s box is ‘Superhero Adventure Crewmate,’ her creation is not at all like action-hero figures — everything from GI Joe to the Caped Crusader — that parents could have purchased for boys over the past many decades.

‘Will’ — that’s his name, and its stems from the character ‘William’ from the book Free to Be … You and Me (who wanted to play with dolls and was ridiculed for it) — is not about guns and muscles. Instead, he’s about … well, whatever the child who opens the box decides he’s about, which is one of his primary reasons for being — to spark imaginative play.

But there are many other motivations as well, chief among them those words and phrases Wilder uttered early and quite often in her interview with BusinessWest: empathy, connectivity, and responsibility, things that just haven’t been emphasized with boys.

“People are wanting more for their kids, and there’s been a lot of focus, and rightfully so, on bringing science, technology, engineering, and math to girls,” she went on. “But no one has really taken a look at boys, and the assumption is they don’t have to. The attitude is, ‘men have the upper hand in the world; why would we look there? That’s not where the problem is.’

“But if you look at happiness studies and depression, men need a lot of help in this area,” she went on. “And we’re not really doing anything for our boys, who then turn into men, if we don’t teach them to connect, nurture, and be empathetic.” 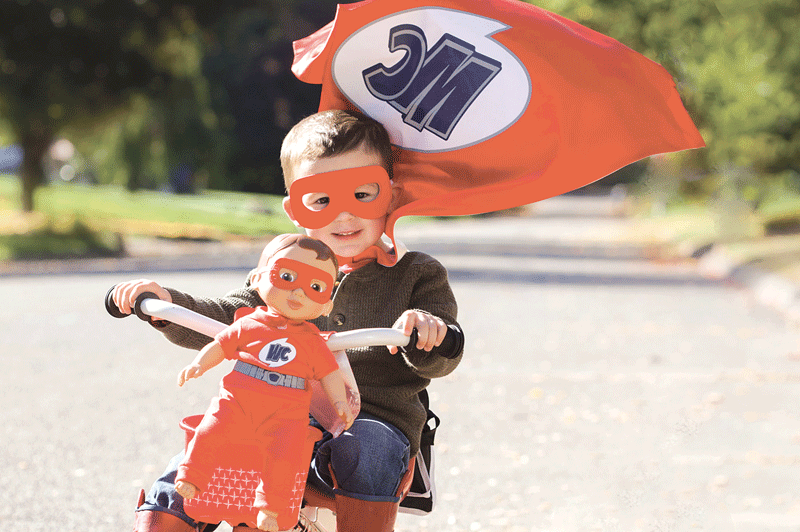 Retelling the story of how ‘Will’ came to populate store shelves in an effort to stem this tide, and will occupy many more in the months and years to come, Wilder said she’s always considered herself entrepreneurial — to maintain a successful psychotherapy practice, one must be, she noted — and has long been interested in creating something beyond that practice.

“I guess I’ve always been interested in building something; I just wasn’t sure what, although I thought it would be something outside the box,” she explained. “Sometimes, if you have this drive to create something different that doesn’t align with everything else out there, you can get pushed into an entrepreneurial endeavor.” And in this case, the push was that infamous note that came from school with her son.

As mentioned earlier, it elicted a range of emotions, including anger and frustration. But it also triggered a desire to do something that would help young boys effectively channel emotions while being masculine at the same time.

And her thoughts soon turned to play as the source of an answer.

“Play actually impacts child development in a fairly significant way — that’s exactly how kids learn,” she told BusinessWest. “I started to look at the toys marketed to boys and found that there were no toys out there that encouraged empathy, kindness, connection, really any kind of emotionality.”

There were plenty of toys that fit that description in what Wilder called the ‘pink aisle,’ the one set aside for dolls and other girls’ toys, but nothing for boys — a situation she soon set about changing, but not before doing some extensive research on what, exactly, was needed, and how that need could best be met.

Indeed, she said she would eventually talk, or consult, with more than 150 people — a constituency that includes parents, educators, children, psychologists, and toy-industry executives — before commencing the work that created a Wonder Crew prototype, if you will.

“I got it in my head that I wanted to somehow merge the adventure of an action figure with the emotional connection of the favorite stuffed animal, and I came up with Wonder Crew,” she explained, adding that she contracted with a few artists to formalize a concept for the marketplace.

From there, she built a prototype and “shot them out” to various schools and families to see how parents and especially children responded.

“Kids loved them — boys, girls, everyone,” she recalled of the initial reaction. “Teachers were like, ‘what is that? This is really awesome.’ It was a very positive response.”

And it generated enough confidence for Wilder to proceed with her Kickstarter campaign last March, a drive that generated more than 500 pre-orders. “This proved that there was a market out there for this, and it essentially launched the product.”

The ‘Superhero Adventure Crewmate’ ($49.95 online) comes complete with superhero cape, mask, and a matching piece of adventure gear for the child to wear. There is also what Wilder calls the ‘builder’ accessory, or adventure package — a hard hat and shirt with a bulldozer and tool belt on it.

In both cases, the child playing with ‘Will’ can really stretch his imagination, which is the general idea, or at least one of the ideas.

Another is to help foster relationship building, something that has always been done with girls, but not with young boys, said Wilder.

“Harvard did a study that followed men for 80 years, a happiness study,” she noted. “I don’t remember the intervals they checked in on, but there were several, and they kept asking, ‘what’s making life most full or happy?’ and at each one, it was relationships. But we don’t foster relationships for our boys like we do for our girls.”

The first shipment of 2,000 Crewmates arrived from the factory in South China in September, said Wilder, and sales, many of them conducted online, have been steady since — more than 700 Crewmates and roughly 300 of the adventure packs.

She has managed to secure shelf space with a number of retailers in time for the holiday shopping season, including A2Z in Northampton, the Gifted Child in Lenox, and the Toy Orchard in Wilbraham, which is an important development and not an easy feat given the scarcity of that shelf space and the rigorous competition for it.

“We made it in about 10 stores pre-holiday, which is tough because most of those stores shop a year or more in advance,” she explained. “It’s start, and a pretty good start; the retail stores have been reporting that they have sold a few and that they feel good about that.”

Looking ahead, Wilder obviously wants to build on that solid start, with more Crewmates and more outlets for the products, and there appear to be many opportunities to do so.

She will have an exhibit at the huge Toy Fair 2016, and has appointments booked with some major retailers, such as Target, Toys R Us, Barnes & Noble, and others.

She is using the $27,500 she won through the VVM Accelerator program — she also won the Pitch Contest at the recent Western Mass. Business Expo, earning a chance at $70,000 infor the first run of the Crewmates, new prototype development, and marketing, the majority of which is being done online, and comes at a time, as Wilder said, when this subject is very much in the news and on the minds of parents, who are thus plugged in.

“Dolls for boys are all over the media right now,” she said, noting that one story that went viral involved a mother who crafted an American Girl doll into something for her son because she couldn’t find a suitable equivalent in the boys aisle.

Meanwhile, she went on, Mattel, the maker of Barbie, recently released the first commercial featuring a boy playing with that iconic toy.

“It’s an interesting time, and I think it’s the right time to be launching this product,” she said, hitting on two of the basics of entrepreneurship — timing, and having the right product for those times.

Wilder is realistic enough to know that son won’t be the last young boy to be sent home with a note talking about how boys shouldn’t cry. As she said, those sentiments are pervasive. 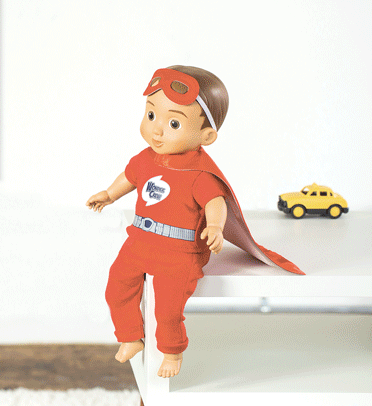 Laurel Wilder says Wonder Crew was created to take the stigma out of boys playing with dolls.

But there is more than hint of a movement that maybe someday they will be far less so, and she wants to be part of that movement.

In Wonder Crew, she believes she has some of the answer, and early results show that, perhaps, she’s right.