Sections The Business of Aging

A Big Move to the ‘Small House’ 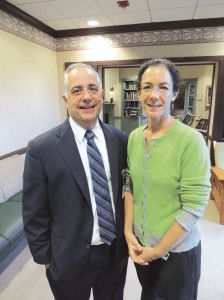 Martin Baicker calls it “the continuation of a journey that started years ago.”
That’s how he chose to describe a strategic initiative at Longmeadow-based Jewish Geriatric Services (JGS), which he serves as president and CEO, to adopt what’s known as the “small-house model of care” into some of its facilities.
The ‘small house,’ or ‘Green House’ model, as it’s also called, involves a more personal, home-like setting for elder care, one that represents the next iteration of ongoing culture change within the industry — and at JGS, said Baicker.
“This furthers a long tradition of caring and embracing culture change — our board is forward-thinking and has always wanted to be on the cusp of what is the latest thinking in terms of care for seniors,” he explained, adding that the ‘journey’ he mentioned started in the ’90s, with movement from the traditional nursing-home setting and operating philosophy to something known as the “neighborhood model.”
This was an effort to “de-institutionalize” nursing homes and make them more home-like, he noted, adding that it involved everything from incorporating carpeting and softer colors on the walls to adding amenities such as common areas, fish tanks, and solariums, to creating a sense of neighborhood by assigning facilities names, such as the ‘New York Unit,’ given to the short-term-care unit.
The small-house model goes further, and, as the name suggests, involves placing 10 to 20 private rooms in a setting that approximates a small house, he continued, noting that the private rooms would be supported by a central living room, or hearth, as well as a dining room and full kitchen.
“People will have their privacy in the rooms, but they can go out to the central living area, or hearth, to engage other residents, visit with family, to have activities — it’s like a home, it’s like a living room,” Baicker told BusinessWest, adding that the concept will first be adopted for a new short-term-care rehabilitation center, and will then be phased into the long-term-care facility, the Julian J. Leavitt Family Jewish Nursing Home.
But the small-house model involves much more than facilities design, said Baicker, adding that it also requires a change in philosophy and operational design that begins with self-directed work teams committed to providing services when and how residents want them.
“The small-house model provides flexibility and choice for each resident,” he explained, “with a personalized team of multi-skilled staff, along with an environment that encourages residents to be an active participant in their care and treatment.”
Susan Halpern, vice president of Philanthropy for JGS, agreed.

“We feel that this is the most transformational thing that we’ve done here since we moved to our Longmeadow campus in the early ’70s,” she said, adding that the scope and potential impact of the initiative should resonate when JGS launches a capital campaign to fund the initiative in the near future.
For this issue, BusinessWest takes an in-depth look at the small-house model of care, and at JGS’s work to stay at what Baicker called the “cutting edge” of advances in the delivery of care in the nursing-home setting.

At Home with the Idea
Baicker said the decision to move ahead aggressively with adoption of the small-house model was one of many suggestions forwarded by a committee assembled by JGS called the Future Vision Task Force.
The group, comprised of board members, key constituents, and JGS staff, spent more than a year researching innovative ways of providing elder care and making recommendations to the full board, he went on.
These suggestions included movement into palliative care, expanding and enhancing technology, general campus-wide enhancements and improvements, and expanding the adult-day-health program with a dementia specialty.
Topping the list, however, was incorporation of the small-house model into both the nursing home and a new short-term-care rehabilitation center.
The small-house model differs from a traditional nursing home — designed much like a hospital with long corridors, rooms on both sides, and a central nursing station — in terms of facility size, interior design, organizational structure, staffing patterns, and methods of delivering skilled professional services, said Baicker, adding that units are designed from the ground up to look and feel like a real home.
“Our goal is to transform how care is delivered at JGS,” he said, adding that, while the model has been embraced in many areas of the country, it is still relatively new to Western Mass., with Mary’s Meadow in Holyoke, a facility operated by the Sisters of Providence Health System, being the only small-house facility currently operating in Greater Springfield.
Beyond the dramatic departure from traditional nursing-home design, the small-house model represents significant change in overall operating philosophy, said Baicker, adding that this evolution, if you will, is “about enhancing dignity and providing JGS residents with cutting-edge rehabilitation and long-term care.”
He summed up this evolving approach with the phrase “resident-directed model of care.”
“The small-house model provides flexibility and choice for each resident with a personalized team of multi-skilled staff, along with an environment that encourages residents to be an active participant in their care and treatments,” he said.
Elaborating, he said that, historically, and in the traditional nursing-home model, residents work around the schedule of the staff. In the small-house model, the staff works around the schedule of the residents.
“To me, it’s about dignity and choice,” he went on. “People can choose to wake up when they want to wake up, not when people tell them to wake up. They can eat when they want, bathe when they want … it’s a philosophical change that’s a work in progress; we want this to be like their home.”
There will be an organizational, or structural, change to accompany the philosophical change, he told BusinessWest, adding that at the heart of this development will be self-directed work teams that represent a dramatic departure from the traditional staffing hierarchy at nursing homes.
“What’s going to change in the small-house model is you’re going to flatten that hierarchy,” he went on, adding that certified nursing assistants (CNAs) will be providing most of the care. “We’ll create a cross-trained, multi-skilled position; these individuals will do traditional things that CNAs have done in the past — the personal care they’ve provided — but in our model, they’ll also do other things. They’ll provide some activities, they’ll do laundry, and in some models, they’ll cook.
“They will spend a lot more time with the residents because they’re in the house doing all these other tasks,” he continued. “The CNAs will spend the bulk of their time with the residents, which is important, because if their condition changes, they’ll notice it first.”
The small house will be a self-contained unit in every sense of that phrase, he said, adding that the self-directed teams will make their own schedules, and there will be much more engagement between the residents and the staff.
“This will be a great place for staff to work,” Baicker noted. “They’ll work in the same place every day and with the same residents every day. And when that happens, it’s almost like they become family members.”
To assist with implementation of these sweeping changes, JGS has assembled a team of experts to work with the staff. The company has selected the architectural firm Perkins Eastman, an international leader in the design of elder-care living facilities, and designer of several small-house facilities. Additionally, JGS has engaged Judith Rabig, one of the foremost experts on culture change and small-house design, to assist with the planning process. Rabig is a nurse and gerontologist who has created plans for more than 20 small houses across the country. She is also the director of the National Alliance of Small Houses.

Room for Improvement
Baicker and Kimball Halpern told BusinessWest that there are no timetables in place yet for the capital campaign or the start of construction, although the project has reached the design phase. And the overall price tag for the initiative has yet to be determined.
What is known is that GJS is committed to continuing a tradition of being at the forefront of change and innovation in elder care, and movement to the small-house format is merely the latest example of this philosophy.
As Baicker said, it’s simply the continuation of a journey.

Saving the Planet  and Money