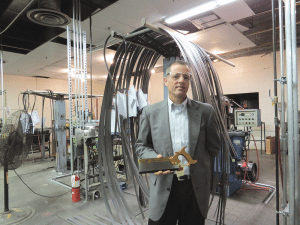 Mark Marzeotti says Disston’s move to Chicopee is part of a larger strategic initiative to make the company more competitive.

In the annals of handsaw manufacturing, the name Disston holds a special place.
Indeed, for decades, that brand was synonymous with quality and the phrase ‘top of the line.’ Visit eBay, and dozens of the company’s saws are listed, some with price tags well above $100, depending on the age and condition of the item in question.
But one doesn’t see that name or distinctive medallion much anymore. Instead, the current iteration of the Disston Saw Works of Philadelphia, started in 1840 and later known as Henry Disston & Sons Inc., makes a number of power-tool accessories, including bandsaw, reciprocating jigsaw, and circular saw blades, and other products for the industrial markets under the brand names Blu Mold, Blu Mold Xtreme, RemGrit, and Aggressor. It also makes tools for the consumer market, with most carrying private labels such as Craftsman (Sears and Kmart), Master Mechanic (TrueValue), and Cobalt (Lowe’s).
But while the Disston name is, for now at least, gone from the marketplace, more importantly for the region, it remains a part of the its still-vibrant manufacturing sector, and now appears on signage at the old Buxton warehouse and distribution facility on Plainfield Street in Chicopee.
The company completed the relocation of its remaining U.S. operations from Deerfield to that site last month, the latest step in what has been a large-scale reorganization aimed at keeping the company competitive and reducing its overall cost of doing business, said Mark Marzeotti, Disston’s vice president of Sales & Marketing.
Most of the domestic manufacturing operations have been moved to China, Marzeotti explained, noting that almost all of the company’s main competitors, including Black & Decker/DeWalt, Skil, Stanley, Irwin, and others, moved all or most production overseas years ago.
“We’re one of the last companies to transition manufacturing of power-tool accessories to China,” he noted. “And we were truly at a disadvantage on a cost standpoint, due to labor-cost differences, by continuing to manufacture in the United States; this seems to be the nature of the beast as it relates to our industry.”
The Chicopee plant, which staged an open house on Aug. 30, is roughly half the size (100,000 square feet, compared to 250,000 square feet) of the Deerfield facility, and more efficient, said Marzeotti, noting that several potential sites were explored before Disston settled on the former Buxton building.
There are currently 50 employees at the Chicopee facility, down from 65 in Deerfield (a number that has been falling steadily in recent years), he continued, adding that there is optimism that this figure could rise, based on recent success in that aforementioned consumer market.
Tracing the Disston company’s recent history, Marzeotti said it was owned for several years by Greenfield Industries, which eventually sold it to Stephen Chen, an entrepreneur and owner of several manufacturing operations, including one that made bandsaw blanks for Disston.
Over the past 24 months, Chen moved most components of the U.S. operation to China, where he owns several plants and is also involved in a number of joint ventures, said Marzeotti, adding that the light-manufacturing operations now in Chicopee are centered on production of Remgrit brand products — hole saw, bandsaw, and reciprocating saw blades with a carbide grit edge — for the industrial market, as well as custom welding of bandsaw loops, another subspecialty the company developed in recent years.
Company officials determined that they could these manufacturing components in this country because they are higher-margin products, said Marzeotti, and also because there is not U.S.-made competition in those categories.
Growth in employment numbers at the Chicopee plant is likely, he told BusinessWest, because of improved volume in the consumer market and projections for more of the same in the near future.
“We won a recent review at TrueValue and went from 100 SKUs to 700 SKUs, we’ve added 22 Craftsman-branded items at Kmart, and we’ve doubled our business at Sears,” he explained, adding that, while these consumer accounts and other industrial accounts involve mostly products overseas, there will be likely be a need for additional employees to receive, repackage, and distribute these products, and that work would be done in Chicopee.
Looking down the road, Marzeotti said the company is mulling the possible return of the Disston brand of handsaws. “Since handsaws are still sold, it would likely make sense for us to come out with a premier line of handsaws under the Disston label,” he said, adding quickly that there is no timetable for such an initiative.
In the meantime, though, the company will work to expand production of those other brands that currently roll out of its plants, and grow market share in the ultra-competitive power-tool-accessory market.
And the Chicopee plant will play a big part in those plans.