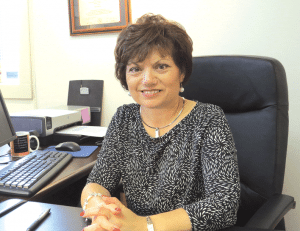 Cesarina Thompson says AIC’s new program in Public Health is a strategic response to changes in the nation’s healthcare system, which stress prevention, not treatment.

Cesarina Thompson says the recently created program in Public Health at American International College in Springfield represents a coordinated response to ongoing trends in this region and across the country — specifically, a strong movement toward preventing disease rather than simply treating it.

“Healthcare is changing, and with the passage of the Affordable Care Act, it is projected that we’re going to be focusing more on disease prevention and keeping people healthy and out of the doctor’s office and the hospital,” said Thompson, dean of the college’s School of Health Sciences, noting that AIC’s decision to launch the program this fall is also a response to an anticipated surge in need for professionals in public health and what’s known as ‘health education.’

Indeed, projections show that demand for health educators in Massachusetts will grow by roughly 50% between 2010 and 2020, said Thompson, who pointed to a number of recent job postings to show what the job market looks like now — and what it will look more like in the future.

Fallon Community Health Plan, for example, recently advertised for an ‘employer group wellness specialist’ to “implement innovative educational strategies for general health and wellness, health promotion, and prevention for employees,” she noted, adding that Premier Health & Fitness Resources, with facilities in Springfield and Hartford, posted for a ‘health screening technician’ and ‘health educators,’ and Emerson Hospital in Concord advertised for a ‘manager of health and wellness programs.’

“We’re seeing more of these kinds of jobs, those focusing on wellness and community health,” she told BusinessWest. “And we’re going to see considerably more of them in the future. This is the direction that healthcare is taking, and there will be considerable demand for professionals who can work in this field.”

Meeting that demand is the primary motivation behind the establishment of the bachelor’s degree program in Public Health, which will be launched this fall, said Thompson, adding that discussions about adding such an offering began soon after she came to AIC late last year from a position as associate dean of the School of Health and Human Services at Southern Connecticut State University.

She told BusinessWest that administrators at AIC have long sought to expand the School of Health Sciences, and a program in Public Health eventually emerged as the most logical and potential-laden option for doing so.

Careful due diligence revealed a need for such an offering in Western Mass., and specifically the Greater Springfield area, because, for starters, there is only one other undergraduate program in Public Health in this area (at UMass Amherst). But another motivating factor is Hampden County’s undesirable status as the least-healthy county in the state, as measured by the University of Wisconsin Population Health Institute and the Robert Wood Johnson Foundation.

“We’re at the bottom of everything in terms of mortality and morbidity, and health factors such as smoking, obesity, and quality of life,” said Thompson, a former nurse, referring to the latest data, from 2012. “These numbers were definitely part of our rationale for creating this program, and it seemed like a great fit for us as an urban institution in the heart of Springfield.

“What we’d like to do with this program is certainly reach out and serve the diverse community of students that we always serve,” she continued, “but also give back to the community, because I believe it will benefit this region to have more people educated as public-health professionals.”

Thompson said the initiative builds on AIC’s other offerings in its School of Health Sciences — Nursing, Physical Therapy, and Occupational Therapy — and uniquely positions these four programs under one roof.

“Although healthcare professions such as nursing, OT, and PT address health promotion and prevention concerns, given our current healthcare system, these professionals typically care for patients at the time of an illness or injury,” she explained. “Public health practice, on the other hand, focuses primarily on helping people to maintain and improve their health.

“What is unique about our new Public Health program is that it will be housed within the School of Health Sciences; students and faculty will have an opportunity to work and learn together, maximizing the expertise that each brings to healthcare, and collaborating to educate well-prepared professionals for our new healthcare system.”

Upon graduation from the program, which will include such courses as Global Health, Epidemiology in Public Health, and Community Health Promotion — as well as a required internship in the public-health arena — students will have amassed the skills needed for a number of well-paying positions, said Thompson, but also the option of gaining a master’s degree in Public Health, with the nearest such program located at UMass Amherst.

Employment opportunities for graduates of the bachelor’s program would come in a number of settings, including nonprofits, community health centers, municipal health departments, and many others.

“In public health, people work within towns and within states,” she explained, listing the state Department of Public Health as one potential landing spot. “If there’s an outbreak of some sort of health problem, these are the people out there providing information on what to do.”

Thompson said the college is projecting that enrollment in the program will likely be between 10 and 15 students this fall — it was not approved by the Board of Trustees until March, too late for the most recent recruiting cycle —  but the numbers are expected to swell to 50 within a few years.

And she expects interest from a number of constituencies — from high-school graduates to individuals looking to change careers to those already in the healthcare sector (or working their way there) who may see public health as an attractive option to clinical-care fields such as nursing.

“This is one of the fastest-growing careers in the healthcare field,” said Thompson. “And we expect that there will be a great deal of interest in this program.”