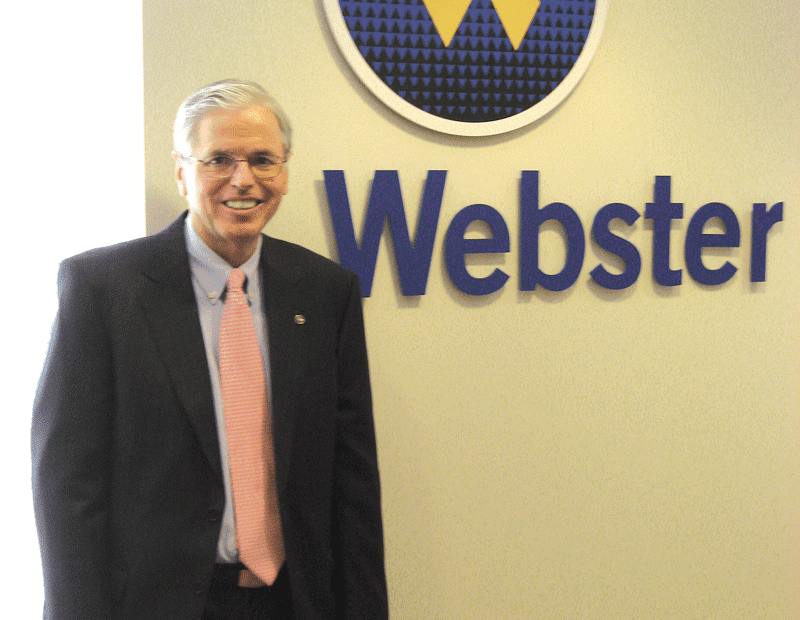 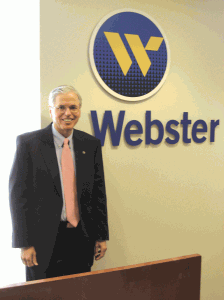 Bob Annon says Webster makes an effort to become partners with their customers, offering financial counsel and services for all stages of life.

When Webster Bank opened branches in West Springfield and Westfield five years ago, it made a bold move into a region which many consider overbanked.
But this longtime major player on the Connecticut scene — it celebrated its 75th birthday last year and boasts 176 locations, most in the Nutmeg State — felt it could keep pace in the Western Mass. region. And, indeed, it has since expanded to locations in Springfield, Longmeadow, and East Longmeadow, with further growth expected down the line.
“When we decided to go in there, we felt that our approach to banking would serve us well competing in a highly competitive environment,” said Bob Annon, Webster’s regional president for Northern Conn. and Greater Springfield.
“We still find it competitive, but we’re pleased with the progress we’ve made,” he told BusinessWest. “We have, as clients, one of the largest and oldest manufacturers in the market, and also some fairly new companies, so we’re pleased with the penetration we’ve made. A lot of credit goes to our people in our branches who deal with people in our communities on a daily basis; they represent us extremely well.”
Annon knows a relatively new player on the region’s banking landscape, even one with the cachet of Webster — an $18 billion commercial bank with extensive retail and wealth-management services — needs to make a positive splash in any way it can.
“We offer a full range of services for individuals, families, and businesses,” he said. “We think that, at our size, we have the capacity to deliver the types of services — and quality of services — that national and even multinational banks offer, but still retain a strong commitment to valuing each customer, from individuals to larger businesses. We think we’re good at that, at staying close to them and treating them well in good times and in bad.”
And there’s been plenty of the latter during the past few years of economic hardship — which, to Annon, presents not just challenges for customers, but opportunities for the bank to help them overcome hardships.
For example, Webster earned national publicity earlier this fall in a Wall Street Journal article headlined “For Lender, Foreclosure Is a Dirty Word.” The article details the bank’s mortgage-modification efforts, citing examples like a couple, struggling with reduced employment hours, who were able to shrink their monthly payments by 17%, lower their interest rate, and shorten their term.
In fact, despite rampant consumer complaints about loan workouts and foreclosures nationally, Webster has been the subject of just 16 such complaints since 2006, which the Connecticut Department of Banking calls “a very small number.”
“We recognized that’s the best way we can serve our customers,” Annon said, “and that it’s in the best interest of the bank to work with customers and keep them in their homes, rather than having more adversarial relationships with them.
“And we’re not just working with residential mortgage modification; it’s what we’ve done with our business customers for awhile,” he continued. “There have been some big bumps in the road during this Great Recession, and we’ve had to amend or modify some relationships and agreements.
“It’s part of the culture of the company when someone does business with us,” he went on — a culture that is gradually drawing new adherents in a region that offers plenty of competition as well as opportunity.

Five Alive
Annon said Webster likely won’t stop at five branches in Greater Springfield.
“I think we’re where we want to be for the time being,” he said, “but we’re always looking. We know five branches isn’t the market density we’d like to have, so we’re always looking for opportunities to find new locations and opportunities to expand in a desirable market like Greater Springfield. It’s been five years now, and so far we’re pleased.”
Founded in 1935 in Waterbury, Conn. as First Federal Savings Bank, Webster Bank has been on an aggressive expansion path in recent years, opening almost 40 branches in four states — it also has a presence in Rhode Island and New York — since 2002 alone.
At a time when many large, national banks are trying to recoup lost profits through more aggressive fee policies (see story, page 39), Webster’s revenue model has long been based on the concept of a lifetime customer, from the initial, basic checking account to a suite of wealth-management services fully customized according to assets and need.
“Our chairman has gone on record saying we have no interest in charging for debit cards,” Annon said. “Having said that, when someone does business with us, it’s important to do as much business as we can with those customers on a personal and business basis. We’re not only selling credit products, but state-of-the-art cash-management products and investment products as well. Rather than have someone just have a checking account with us, we want to deepen that relationship with them, so that they’re a Webster customer for a long time.”
Through those services, and others, such as online bill pay, “we can really establish many different venues for customers,” he said. “Our commitment has always been to be, not a transactional company, but a relationship-oriented company; customers can look to us for advice, and we can counsel them as well as provide them with banking services.”
To that end, Webster boasts certain specialties in its lending and cash-management programs, including health care, not-for-profits, professional firms (such as lawyers and CPAs), and condo and homeowners’ associations.
“For example, in health care, we have people with intimate knowledge of third-party payers — Medicare, Medicaid, and insurance companies — who are critical if the goal is to become involved with hospitals, nursing homes, and people who rely on those third-party payers,” Annon said.
That expertise was recognized by the Massachusetts e-Health Institute, which named Webster its preferred provider of financing for electronic health records. “This is the program to get medical and health care providers using electronic health records,” he said — a major issue facing health providers over the next several years. “We have programs that can provide 100% financing for that hardware and software.”
Webster also has an asset-based lending specialty, as well as a program that specializes in equipment financing. “Our people really come to understand equipment values and, in many cases, are able to lend 100% of the purchase price of equipment,” he explained. “It’s delivered by people who have been in the market for a long time and who have done this a lot.”
Other specialties are in Small Business Administration loans — Webster is the number-one SBA lender in Connecticut — and check fraud and electronic fraud, “which is becoming more and more pervasive,” Annon explained. “We’ve been conducting seminars on what companies can do to protect themselves from this fraud.”
It’s another way to provide value to a community, he said, and to market the bank to people who might eventually be Webster customers.

Community Focus
It’s all part of an overall strategy to make Webster part of the community fabric. That includes philanthropic efforts, such as the bank’s support of organizations like the Food Bank of Western Mass., Open Pantry, the Urban League, and the capital campaign at Baystate Medical Center. “We’re determined to give back to the community wherever we can,” Annon said.
And, by all accounts, the communities of the Pioneer Valley are starting to see some economic growth, albeit slowly, and that improvement is starting to register in increased business lending at Webster.
“I think it’s starting to loosen up,” he told BusinessWest. “The results we’re seeing, with some third-quarter financial statements starting to dribble in, are generally fairly good, and the market might be starting to turn in confidence, which is where we really need to change. Banks are ready and willing to lend money, but there’s been reluctance by companies to borrow.”
As that confidence begins to take hold, he said, Webster will be ready to become not just a lender to growing businesses, but a partner.
“We are committed to to our customers’ success,” he said. “If they come to Webster, they’re going to find a bank that can fulfill all their banking and investment needs. They’re going to find a banker who is going to be candid and forthright from the first meeting on, and a banker who will deliver what they say they can deliver.”
Perhaps more importantly, during an era of such turmoil in financial services, Annon added, “they can expect a bank that’s going to stay around — that wants to stay part of their banking picture for a long time.”
For life, actually.