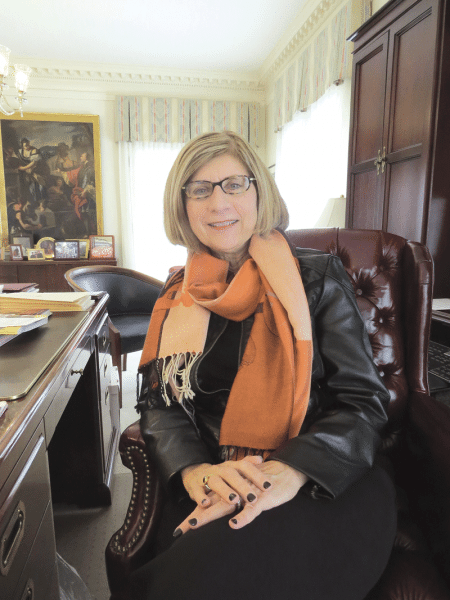 Carol Leary says women can, and must, play a lead role in efforts to stem violent extremism.

At first, Carol Leary thought the e-mail she received in September was spam, and was wondering why it didn’t go into that particular folder.

It was from the Department of Homeland Security (DHS), she said, and was essentially an inquiry, with the sender alerting Leary, the long-time president of Bay Path University in Longmeadow, that she had been nominated for a position on the Homeland Security Academic Advisory Council, or HSAAC, and asking if she was interested in learning more and possibly serving.

This was an acronym that Leary admits she had never heard of — “I didn’t know this panel existed” — but now rattles off with great frequency and ease.

Indeed, after determining that the e-mail was, in fact, legitimate, and not junk or, worse, a virus spreader, Le ary did apply for that panel — because she immediately grasped the importance of its broad mission and the fact that sitting on it would be a great honor not only for her, but the school she’s led since 1994.

She was chosen to join seven others as the latest members of a panel that is essentially parked at the intersection of academia and DHS, which is becoming an ever-more-important spot on the map.

Through its six subcommittees, the HSAAC focuses on such matters as campus resilience, cybersecurity, international students, homeland-security academic programs, academic research and faculty exchange, and student and recent-graduate recruitment, and that list of assignments certainly helps explain why Leary received that e-mail mentioned earlier.

Indeed, Bay Path has put itself at the forefront of such issues and concerns, said Leary, through both graduate and undergraduate degree programs in cybersecurity and specific courses such as “An Introduction to Terrorism and Counterterrorism” and “The Path to Violent Extremism,” both offered by the American Women’s College and the One Day Program at Bay Path.

“I think these programs are what really attracted Homeland Security,” she told BusinessWest, “because the newest area they will focus on is countering violent extremism, and when they saw we had classes taught by someone with a great reputation in Great Britain on this subject, they knew we had an expert.”

That would be Bob Milton. He’s the retired commander of the London Metropolitan Police Service, New Scotland Yard; director of his own consulting company that specializes in counterterrorism consulting; and, as noted, professor of Criminal Justice and lead faculty for Counterterrorism at Bay Path.

He blueprinted many of the courses at the college, including the two mentioned above, and recently delivered a talk at the school, as part of its Kaleidoscope series, called “Countering Terrorism: The New Role of Women.”

This is a subject of particular interest to Leary — and the rest of the HSAAC, for that matter — because it represents an important, but far from fully tapped resource in the battle to identify and possibly defuse developing violent extremism.

“As we know, in our own country we have young people being radicalized,” she told BusinessWest. “Mothers are probably going to be the first to recognize this. The question then becomes, how do we reach women, not only in all communities, but particularly Muslim communities across our world, probably woman to woman? I think this is going to be a very important role for women to play in the field of countering extreme violence.

As we know, in our own country we have young people being radicalized. Mothers are probably going to be the first to recognize this.”

“We need to give them the tools, the techniques, and the impetus to do this,” she went on. “We need to show them they will be helping our country and helping the families in which students are being radicalized.”

Milton agrees. “You could say that the biggest threat to the U.S. is coming from within; the last few attacks have both come from within,” he said, citing incidents in Florida and California. “We need to put much more effort into identifying those people who are becoming radicalized and then putting in place measures to try and carry out intervention. And women can play a big role in this.”

For this issue, BusinessWest looks at Leary’s appointment to the Homeland Security panel, but also the developments that led to it — specifically the school’s rise to prominence in this field — and the many issues involved with combating violent extremism.

As he talked about the many issues involved with countering radicalism and the importance of doing so on many levels, Milton recited a statement issued by members of the Provisional Irish Republican Army after it executed a nearly successful attempt on the life of then-British Prime Minister Margaret Thatcher in 1984 at the Grand Hotel in Brighton.

“It said, ‘you need to be lucky all the time — we only need to be lucky once,’” he recalled, adding that the note was received after Thatcher narrowly escaped the blast of a long-delay time bomb that left a gaping hole in the façade of the hotel. (Five others were killed in the attack, and 31 were injured).

Milton told BusinessWest that he recites that IRA message often in the talks and lectures that he gives in cities around the world, and probably not in the context that most people might think. Instead of agreeing with the gist of the missive, he says its thinking is inherently flawed.

To get his point across, he summons a quote often attributed to golfing legend Gary Player, among others, which goes something like, “the more I practice, the luckier I become.”

Whatever the exact quote is, and regardless of who actually said it, the message is clear, said Milton: the harder individuals, groups, and countries work to counter terrorism and violent radicalism, the more successful they will be.

This, in essence, goes a long way toward explaining the existence (and the mission) of not only the DHS, but the HSAAC as well — which is, in part, to practice hard at the work of recognizing and stemming radicalization.

“We need to work harder so we’re lucky,” said Milton, adding that this work constitutes a large, complex fight, started long ago and now waged on many fronts and in many ways. And it focuses on everything from working with, rather than isolating, underprivileged communities, to teaching others how to spot the many warning signs of someone being radicalized.

Milton said these include changes in behavior, being secretive, excessive amounts of time spent on the Internet, acquiring new friends, disappearing for long periods of time, and becoming angry, frustrated, even passionate about things they see on the news.

But spotting the signs is only part of the equation, he went on, adding that people, and especially mothers, need to know what to do when they see those signs. Bob Milton says individuals, agencies, and nations need to work hard to counter radicalization and essentially make their own luck.

“It’s my experience that it’s the families, and the women in the families, who are more likely to see the signs of radicalization earlier than anyone else,” he explained. “There have been so many cases in the U.K., particularly, where young women or men have become radicalized, and in some cases have gone off to fight and die in Syria, and yet their families — and particularly the women in those families — knew there was something going on and had nowhere to go.”

In short, he went on, women — especially those who are, for some reason, be it language issues or something else, isolated within their community — need to become less isolated and, therefore, more empowered to effectively deal with these situations.

And women, as noted, can play a huge role in this effort, said Leary, who, as she talked about this, drew an effective, even poetic analogy to the work carried out by women at Bletchley Park, the headquarters for Britain’s fabled code breakers during World War II, immortalized in countless books, TV series, and movies such as the recent The Imitation Game.
“The word we would use for it today is cybersecurity,” she said of those efforts to break the codes enciphered on Germany’s Enigma machines. “All the men were off fighting the war; it was the women trying to decode messages sent all across Europe. Fast-forward 70 years, and it’s clear that we again need more women in this field.”

Bay Path is certainly doing its part in this effort, she went on, adding that roughly 80 students are enrolled in its cybersecurity programs, and the number is growing every year.

The master’s-degree program in cybersecurity management graduated its first class in 2014, and there are now 30 (17 of which are women) currently enrolled in that program. Meanwhile, there are 50 students (almost all of them women) enrolled in the undergraduate program, which features concentrations in digital forensics and information assurance.

As noted earlier, though, the role to be played by women moving forward is multi-faceted and goes much deeper than taking jobs in this growing field. It entails work within and for the community to intervene and hopefully prevent individuals from resorting to violence in support of a cause or faith.

Leary, named by BusinessWest as one of its Difference Makers for 2016 for her work at the college and in the community, acknowledged that she had more than enough to keep her busy before that e-mail arrived in September.

And while she has, indeed, learned to say ‘no’ over the years due to the sheer volume of requests she receives to donate her time, energy, and talent to a group or cause, that word never entered her mind when the DHS enlisted her help.

That’s because the group’s mission is so important, and also because Bay Path has made major investments — and major strides — toward become a recognized leader in cybersecurity and related programs.

And those investments can and will yield dividends at this critical juncture for the country — and the world.