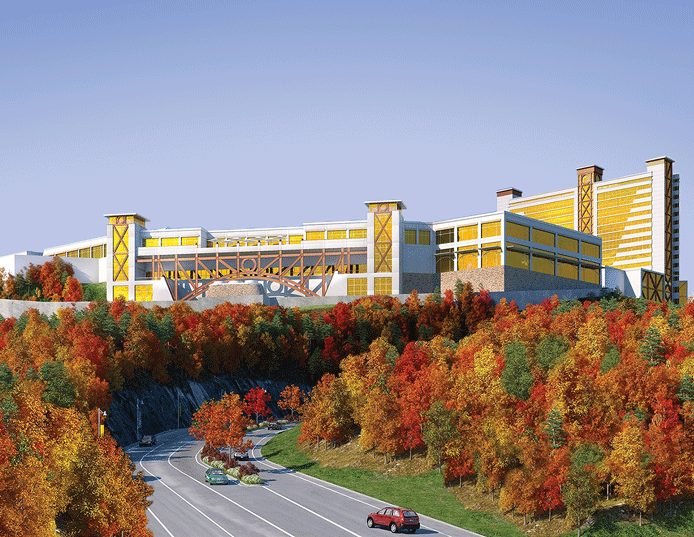 Best of the West? 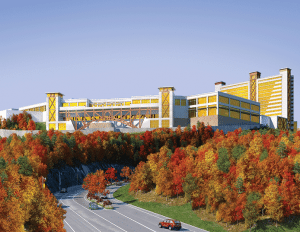 Mitchell Etess says that, even when its plan for a casino in Palmer was essentially the only one on the table, Mohegan Sun knew there would be competition for a license in this part of the state, and probably lots of it.

But now that this competition has materialized — three other proposals: two for downtown Springfield and the other at the Big E in West Springfield — the company is approaching its work in much the same way that it did in 2009, 2010, and 2011, when it had the only colorful architects’ renderings in the local newspapers, and the subjects of conversation were if and when casino legislation would ever be passed.

“We’ve been in this marketplace [New England] for some time, and we looked all over the Western Mass. region — we always wanted to be in the west,” said Etess, CEO of the Mohegan Tribal Gaming Authority, referring to the company’s prolonged search for a casino location. “We looked at every single site, including some in Springfield. But we ultimately chose our site because it is, without question, the best location in the west, in our opinion.”

Elaborating, he said the parcel directly off exit 8 of the Turnpike represents a true, and desirable, destination, something he believes cannot be said for the other Western Mass. proposals, and especially those in Springfield. 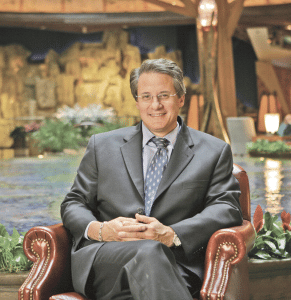 Mitchell Etess says the Palmer location brings a number of benefits for the Commonwealth as a true destination.

“Our location is someplace where people would want to go spend a few days,” he said. “I don’t say that to disparage Springfield, but the fact is, this is what people think about when they consider getting away for a few days — a place on a mountain, in the country — and not in the middle of a city.”

Meanwhile, this particular location may well have a huge advantage over the other three with regard to an emerging issue in this contest — the looming overhaul of an elevated section of I-91 that runs through downtown Springfield. If and when it happens, that project, estimated to cost $300 million to $400 million, would likely impact access to all three rival casino sites, said Etess.

“There’s a tremendous amount of congestion involved with an urban casino,” he said, “and we just don’t have that; we have people getting right off the turnpike and right onto our property.”

But while he did discuss the plight of his competitors to some degree, Etess chose to focus mostly on Mohegan’s project — now known as Mohegan Sun Massachusetts (more on that later) — and its strategic plan moving forward.

In essence, he said, this comes down to getting across the company’s main message: that a true destination resort casino is what the public wants, it’s what will best serve the state in terms of revenue, and it’s what Mohegan does.

“The reason there’s going to be gaming in Massachusetts is because of the success of Mohegan Sun and Foxwoods,” he explained. “What people in New England are used to is this rural gaming experience; we don’t believe people want to go downtown to go to the casino in New England, and we think people are very comfortable with what is known and successful.

“And, quite frankly, we know how to it,” he continued. “At the end of the day, we have the model that people are used to, we have the rural setting, we have access off the Turnpike, and we have 152 acres — we’re not pigeonholed into a few city blocks.”

For this issue, BusinessWest continues its series of stories on the players in the ongoing casino competition with another look at the Palmer project, which is now part of a crowded field, but a venture that those at Mohegan believe still stands alone.

Much has happened since BusinessWest last talked at length with Etess and others involved with the Palmer casino proposal in the fall of 2011, just after gaming legislation was passed by the Legislature.

In short, Western Mass., and especially Springfield, became by far the most intense casino battleground in the Commonwealth. Over the span of a few months in the second half of 2012, three proposals were announced for Springfield, with one — Ameristar’s plan for a parcel off Route 291 — eventually shelved. In December, plans were announced for a project that would be built in a corner of the sprawling Big E complex on Memorial Drive in West Springfield. And in Holyoke, Mayor Alex Morse first announced he would consider a casino proposal for his community (after he campaigned against the concept when seeking the office in 2011), and then reversed course again and said such a facility wasn’t the answer for his city.

Through all that, the Palmer casino plan lost large amounts of attention in the press it once dominated, and, in the minds of some, lost some momentum as well.

But Etess doesn’t see it that way.

He acknowledged that his plan did lose some visibility as the press trained its cameras and microphones on the CEOs of rival casino developers as they stood in front of elaborate visual displays of their concepts. However, he said the Mohegan Sun plan never lost what he believes it has always had — a few important legs up on the competition, even before it materialized.

And this brings him back to that notion of location, but also Mohegan’s longstanding presence in the New England market, its track record with the resort-destination model, and the database of area customers it has at its disposal.

“If you ask people in this business to identify the biggest asset a casino has today, and they say anything other than their database, then they’re not being completely honest,” he explained. “Our casino will begin with a database of customers, and the ability to market directly to customers who are familiar with our brand, and that we know everything about, is something that no other competitor in the west can offer, and that’s a huge advantage.”

While watching MGM, Penn National, and Hard Rock International roll out their plans in 2012, Mohegan Sun officials were tweaking and, in their opinion, improving their proposal and making it more battle-ready.

New renderings of the project, including those on pages 6, 8, and 9, were released, and the name change — from Mohegan Sun Palmer to Mohegan Sun Massachusetts — was made official. 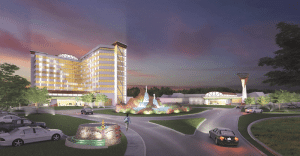 Mitchell Etess says the Palmer site offers many advantages, starting with its location off Turnpike exit 8.

Meanwhile, the company struck a partnership with the New York investment group Brigade Capital Management to bankroll the development, an accord that Etess believes will give the project another edge.

“We believe our project is on the soundest financial platform of anyone in the west,” he said, adding that this footing, coupled with a solid brand that is well-known in the region and the Palmer location, puts the project in a position to effectively compete for the license.

Overall, the Mohegan proposal is currently projected to cost $735 million and include a casino, hotel, and retail, said Etess, adding that the company is looking for a third-party developer to create other amenities to ensure the property has what he called “complete synergy.”

“We’re very comfortable that our casino and the additional third-party retail development is a very sound business model,” he continued, adding that be believes the proposal is right-sized for this location and that the market it is intended to serve is certainly strong enough to support it.

Groups supporting the casino, especially Citizens for Jobs & Growth in Palmer, have been anxious for details on the project and its latest developments, said Jennifer Baruffaldi, spokesperson for the organization, noting that a referendum on the plan could come as early as June, but is more likely to happen in September.

Etess said the existence of competition will impact the amount and nature of the information released on the project, but specifics will certainly be known before the referendum vote.

Etess told BusinessWest that he takes comfort in the fact that the competition that will unfold over the next 10 to 12 months and end with the Gaming Commission’s decisions on which operators will be awarded licenses for the three regions will not be a popularity contest decided by the public or the press.

It will come down to a simple, mostly objective contest to see which party can best convince the Gaming Commission that its project is the best bet for the Commonwealth, he said, adding that there are obviously many factors that will go into that decision beyond the urban-versus-rural casino debate — although that will be part of the discussion.

“This is about five people deciding what they believe is best for the state,” he explained, adding that he has been through similar competitions in other states and understands their vagaries and complexities. “They have to decide what will provide the most revenue for the Commonwealth and what brings the most to the table for the Commonwealth, because that’s what this is.

“It’s jobs, it’s community, it’s revenues you can drive, it’s creating out-of-state revenue … and we have a compelling case,” he went on, adding that it is summed up in the new name and logo for the Palmer project.

Etess told BusinessWest that the name was chosen carefully, to convey that this is a project that will have benefits for the entire state, not a city, such as Springfield, or the area surrounding it.

“Our goals and those of the [casino players] in Springfield are very different,” he went on. “They’re going to beat themselves up trying to argue what’s best for Springfield; our goal now is only to make a case about what’s best for the Commonwealth.”

Etess brushed aside comments from some observers of the casino contest that Mohegan Sun chose Palmer, and not a location further west, to minimize the impact on its operation in Connecticut. That theory holds that residents of some regions of Connecticut would be more likely to drive to Mohegan’s operation in that state (or to Springfield) than to Palmer.

Etess said that any operation in Western Mass. would draw patrons away from the Connecticut casinos, including one in Palmer, but the more relevant point is that a Palmer casino would more easily draw residents from across the Bay State and also Vermont, New Hampshire, and beyond than an operation in Springfield would.

“We don’t believe that people in New York, Vermont, or Albany who think about a vacation that includes gaming would go to downtown Springfield for that vacation,” he explained. “We believe that our location is much more realistic for that kind of vacation and presents a much bigger opportunity to benefit the Commonwealth.”

When asked about the company’s plans moving forward into the next stage of the competition, Etess said Mohegan will be doing mostly what it’s been doing since it set up a storefront on Main Street in Palmer in 2009.

“We’ve been planning, we’ve been part of the community, and we’ve continued to build relationships and have conversations within the community while watching the landscape unfold in front of us as we anticipated it would,” he said. “And we’re going to continue doing those things.”

Etess told BusinessWest that he’s not sure if the Palmer proposal will benefit in any way from being the first proposal introduced to the Western Mass. region. And he acknowledges that many believe there are no advantages from such standing.

Such talk is mostly irrelevant now, he said, because the goal never really was to be the first one in, but to be the last project standing when it comes to the Western Mass. region.

He believes Mohegan Sun Massachusetts has some trump cards at its disposal — from location to brand to experience serving this region — that can enable it to win the jackpot.

MGM’s Mike Mathis Believes Problems, Doubts Are in the Past

Financing: It’s Not All About Interest Rates

Celebrating the Difference Makers Class of 2016