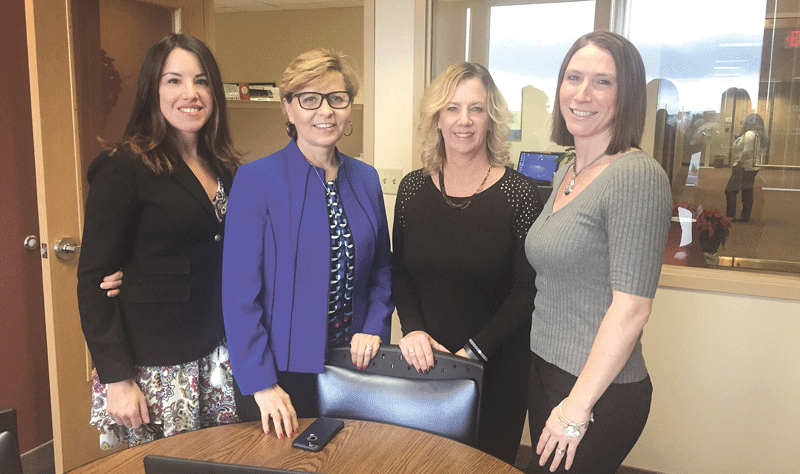 Some of the team at BRP/Grenier, from left: Kelly Landron, Pat Grenier, Kim Galinski, and Lindsey Arventos.

As one of eight children, Patricia Grenier says she really doesn’t need any more family. Yet, as principal at BRP/Grenier, her growing financial-services practice, she treats clients like family members — which often means helping them make tough decisions.

One client was transitioning into assisted living and needed $200,000 immediately, and wanted to take it from her investment account. But the market was down, so Grenier was loath to do that.

“Her response was, ‘I don’t care what you do, just find me the money,’” she told BusinessWest. “So I called an associate at a bank and asked him if we could coordinate an equity line for this woman.” They did, and six months later, she sold her home, paid off the equity line, and moved into the facility.

“Those are the kinds of things we think about,” she said. “If all we focus on is investments, we would not go beyond and start asking the appropriate questions that need to be asked.”

Another client called about wanting to buy a car, and asking about loan options. “I asked, ‘why are you taking out a loan? You have enough money invested. You can use your own money.’ She was elderly; there was no need for her to have debt.”

In short, BRP/Grenier is an investment-strategy firm that goes well beyond its advertised services, which run the gamut from financial planning and education savings to retirement strategies and estate planning. Grenier considers it all life planning, which encompasses far more than crunching numbers.

Clients want to protect what they have but also grow it, and helping them do so takes a comprehensive understanding of their lives and goals — what’s important to them, what their resources are, and what their challenges will be to get there. With close to $200 million under management, it’s a responsibility she takes seriously.

“There are all kinds of issues to resolve: do they need more cash flow? Maybe there’s too much liquid, too much invested. Do they have a will? We’ll prod them to do a will or trust, those kinds of things.”

Those are questions she and her firm are asking many more clients these days, following the acquisition of a practice in Wethersfield, Conn. (more on that later). Getting to know the ins and outs of those lives is a challenge Grenier embraces, because it’s key to helping them succeed.

“I try not to focus on what the market is doing currently,” she said. “It’s a long-term strategy, so I focus on your life — what will make your life better. Temporary moves in the market won’t make a big difference in the scheme of things.”

Grenier says her skills as a listener, problem-solver, planner, and fact-checker were developed at a very young age, as the family interpreter and liaison for her large, family of Ecuadorean immigrants. So she enjoys learning the details of clients’ situations to help them formulate a big-picture perspective.

“Some things that people might find daunting, we think are really easy to handle,” she said. “For example, they might not be able to make ends meet, and they’re charging monthly expenses on a credit card. We’ll work on cash flow, figure out how to reprioritize spending. Maybe it’s time to downsize their home, or buy things for less money.” 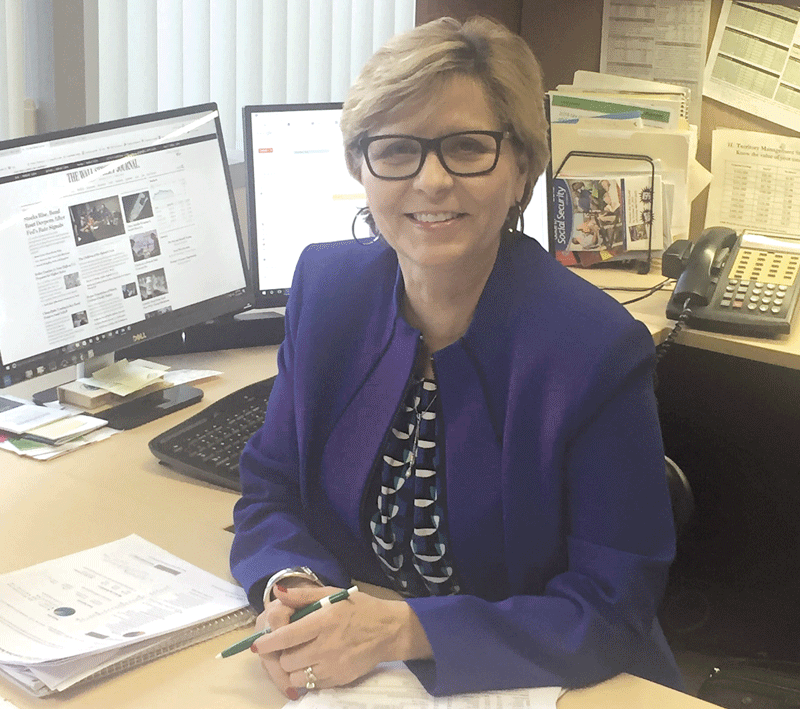 Pat Grenier says crafting a strategy for long-term financial security begins with fully understanding the goals, circumstances, and challenges of each client.

While many clients are concentrated around the pre-retirement years, Grenier said, she helps people in all stages of life — for example, young professional couples making enough to save but worried about mortgages and school debt and saving for their kids’ college education, and knowing they’re in an income bracket that isn’t making them rich, but won’t be a magnet for financial aid. So they need a strategy.

And young people don’t start out with the advantages past generations did, notably the idea that they’ll work for one employer and retire with a healthy pension that will see them through their retirement years. These days, young professionals expect to progress through several jobs, none of them offering pensions. So it’s up to them to navigate investment options like 401(k)s and other vehicles.

“It’s a dynamic process. Life isn’t black and white, and we have to adjust,” Grenier said. “If there’s a job change or an illness or a birth or a divorce, we have to make sure we can adjust their plan so that it’s a viable plan that works for them. Everyone’s different, so the plan is going to be different for everybody.

“We want to help them achieve their goals, and sometimes we have to be the reality check,” she went on. “We have to say, ‘no, you can’t do this; you don’t have enough money.’ And sometimes, we need to say, ‘yes, you can buy that home on the Cape; you can afford it.’ So it works both ways.”

After a while, she explained, as she gets to know clients better, they come to trust her and her team, and they’ll be more comfortable divulging personal matters.

“I feel like sometimes I know them better than their own family members. And sometimes I have to protect them,” she said. For example, one client was diagnosed with Alzheimer’s and her nephew wanted power of attorney, but she didn’t feel he’d do a good job and recommended she pick someone else.

That said, Grenier can’t force anyone to make a financial decision.

Not every decision is bottom-line based. One client was selling her business to family members and wanted to know how much she should get for it — not necessarily top dollar according to its value, but what she needed to strike a fair deal for her family, yet be able to live comfortably in retirement. “So we needed to make a projection about life expectancy and her needs, and once we figured that out, it was easy to come up with a number.”

Grenier was looking to expand her practice’s footprint when she learned that Joseph Connelly, owner of the Wethersfield Investment Center, was looking to retire. A few months after he and Grenier met, they agreed their cultures were a good match, and Wethersfield became a division of BRP/Grenier in September.

The Wethersfield office, which had previously operated under a different name, became the Wethersfield Investment Center in 2003 when Connelly assumed full ownership and became a Cadaret Grant-registered financial professional. The fact that Wethersfield and BRP/Grenier share the Cadaret Grant connection has made for a smooth transition, Grenier said.

“It’s in Connecticut, so it’s a different market, different laws, things like that, but a lot of the same principles apply,” she told BusinessWest. “I’m getting to know the clients, starting to delve into their lives, telling them, ‘you can count on us to help you with whatever you need help with.’ I know I have big shoes to fill. It’s a big challenge, but I love a challenge.”

All this makes for what she calls an exciting time in her business, but through the growth, she doesn’t want to lose track of the personal involvement that characterizes her relationships with clients. She began her career working for large houses where she had no time to get to know clients, and that frustrated her and drove her to become an independent advisor in 1990. And people welcome the sometimes necessary hand-holding it takes to help them navigate downturns in the market and, sometimes, in their own families.

“Maybe it’s my personality, but I tend to get way involved in people’s lives, maybe because I’m one of eight kids,” she said. “Every person who comes to me is treated as if they were my own family. And every person on my staff, that’s how they look at our clients, too.”

And it’s satisfying, Grenier said, to see financial strategies pay off in the form of peace of mind.

“In this business, we are so overregulated, and we have to love our business to be in it,” she said. “We want to retire people well, and it’s so gratifying to get a note from a client thanking me for what they currently have. I want to help people lead the good, comfortable life they’re accustomed to.”