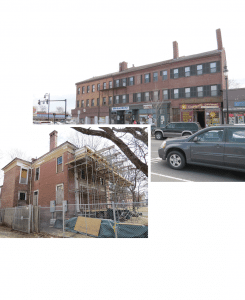 Above, the Gunn Block on State Street; below, 83 Maple, also known as the Ansel Phelps House, after the city’s fourth mayor, who lived there.

Jay Minkarah says there’s a course of action, or series of steps, traditionally followed by developers as they are contemplating whether to acquire a piece of commercial real estate and ready it for tenants.

“Typically, you undertake your feasibility analysis and make sure the market’s there,” he said, adding that most developers will take a cautious, conservative approach to such work, especially in difficult financial times such as those experienced over the past several years. “Then, you go through your financial analysis, you line up your financing, get tenants or an end user in place, and then you start work.”

But when it comes to projects currently being undertaken by DevelopSpringfield — the private, nonprofit agency tasked with spurring development in the City of Homes, which Minkarah took over roughly 16 months ago — most, if not all, of those steps have been skipped.

This is especially true for initiatives involving two historic properties just outside the central business district — the Gunn Block on State Street, said to be one of the oldest commercial properties in the city, and a once-stately former residence known simply as 83 Maple — and there is a reason for this.

Actually, there are several.

For starters, these are properties deserving of the descriptive adjective ‘blighted.’ Both have been condemned, and, in the case of the Gunn Block, the large red ‘X’ above the door — placed there to warn firefighters that in the event of fire they are not to enter the building — is clearly visible. And bringing new life to blighted properties is one of the main tenets of DevelopSpringfield’s mission. 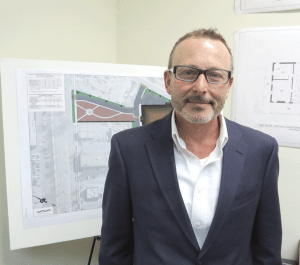 Jay Minkarah says the current projects in the DevelopSpringfield portfolio don’t make sense financially, but they do from the standpoint of the agency’s mission.

What’s more, the properties are highly visible. The Gunn Block is located across State Street from the main entrance to Springfield Technical Community College, just a few hundred feet past Commerce High School, and around the corner from a planned Mason Square grocery store, another project with which DevelopSpringfield is involved. Meanwhile, 83 Maple is at the intersection of Maple and Union streets, meaning that thousands of people pass it every day and have watched it deteriorate.

These properties are, in many ways, symbolic, said Minkarah, adding that they have been vacant and underutilized for many years and thus have become signs of a city that is stagnant and in decline.

So, considering all of the above, Minkarah decided — and rather quickly after assuming directorship of the agency in December 2012 — to essentially bypass those due-diligence exercises listed above and acquire the properties. They are both undergoing extensive renovations with the goal of having them retenanted in the next few years.

“We skipped a few steps and went right to implementation,” he told BusinessWest. “And that’s important for a variety of reasons. I think it’s important to demonstrate that progress is possible, that we really can make great things happen, that we can actually change things on the ground.

“The projects that we have chosen have been designed to have maximum impact,” he went on, adding that another initiative — acquisition of the former River Inn further east on State Street, subsequent demolition of that property, and preparation of the site for resale — also fits this description. “And we believe that successfully developing these will create some real momentum in the city.”

Minkarah used that word ‘we’ repeatedly as he talked about these projects, and he used it to reference not only his agency, but the many constituencies it works with, from Springfield city officials to other development-focused organizations.

For this issue and its focus on commercial real estate, BusinessWest talked at length with Minkarah about the current roster of projects in the DevelopSpringfield portfolio, why they were chosen, and what they mean for the city moving forward.

Minkarah told BusinessWest that he not only works downtown but lives there as well, and frequently walks the area.

He has a number of preferred routes, including a trek up State Street into Mason Square; another that covers a wide swath of Main Street, essentially from the South End past the Arch; a walk that covers the full length of Union Street; and still another that takes him along Maple Street and often to the Springfield Cemetery.

It was while taking some of these walks — and also many drives throughout the city —that Minkarah identified some potential priority initiatives for DevelopSpringfield, including those that are currently in progress.

“I made it a point to drive around the city and walk around the city and try to understand the dynamic of what was happening,” he explained. “I was looking at it strategically and saying, ‘if we were to intervene, where would it make the most sense to do so? Where could we, while staying within our means, have a maximum impact?’ And these buildings popped out right away.

“We have properties in this city that are very distressed,” he went on, “but because of their location, while they may have value to some people, an intervention on those buildings wouldn’t be strategic.”

He chose that word ‘intervene’ carefully, and summoned it to show how the agency has chosen to inject itself into situations where solutions are both necessary and elusive.

That was certainly the case at the River Inn, acquired at auction roughly a year ago, which had become not only an eyesore, but a frequent crime scene.

“This was a real source of problems for the city and the neighborhood,” said Minkarah, adding that the 1.5-acre property, enlarged through the acquisition of some adjacent parcels, is currently being readied for redevelopment and is officially on the market.

“We’ve had a few nibbles,” he went on, adding that retail is the likely eventual use, and if a deal comes together, it could help spur additional development in an area he believes should capture the attention of national chains, but historically hasn’t.

“State Street is a corridor with tremendous potential,” he said, “and part of what we’re trying to do is get that message out. A lot of things have happened that are really significant, but it can be a challenge to get national chains to recognize the value of that corridor and what a tremendous investment and development opportunity it is.”

“Part of the reason why we’re making these very strategic investments is to enhance the development potential of that corridor,” he went on. “Taking down a building like the River Inn, which was a blight in that area, is one step toward doing that.”

The River Inn site is just a few hundred yards east of the Gunn Block, another property that seemingly begged for intervention.

This landmark predates the Civil War, said Minkarah, adding that its historical significance — it’s on the National Register of Historic Places — coupled with its location and blighted condition made it a prime candidate for the agency’s attention.

“To me, having a condemned building of obvious historical significance, located on State Street at a major intersection, directly across from STCC and the Tech Park … that’s just not OK,” he said. “That’s a condition that has to change. Like the River Inn, the Gunn Block is a property that had deteriorated and was acting as a blight on the area, inhibiting future investment and development.”

Acquired for $90,000, the property is part of a row of buildings between Commerce High School that are vacant or underutilized — the long-closed Cavanaugh Furniture building is part of the mix — and that Minkarah believes have great potential.

“When I look down that block, I realize that we have this whole row of historically significant buildings that, if they were revitalized, if they were rehabbed, could become a small but interesting and vibrant district that serves the college, serves the neighborhood, and serves the people who work in the area,” he told BusinessWest.

Many of the properties in that row present challenges, and the Gunn Block is clearly the most challenged, said Minkarah, adding that asbestos was found on the walls of the second and third floors, and the process of abating it is slowing the extensive process of stabilizing and then rehabbing the property.

The agency was able to secure a $200,000 brownfields grant from the Environmental Protection Agency through the Pioneer Valley Planning Commission, he noted, adding that it will pursue historical tax credits and grants to help finance what will likely be a $1.5 million project to ready the property for tenants.

A restaurant/pub is the most likely next use for the first floor, while residential development is eyed for the upper floors, said Minkarah, adding that a re-use plan will be created for not only the rest of that aforementioned area, but also a planned grocery store across Walnut Street and the surrounding blocks.

Meanwhile, work continues at 83 Maple, which was built in 1841 by Solymon Merrick, inventor of the monkey wrench (one of Springfield’s many firsts) and later bought by Ansel Phelps Jr., Springfield’s fourth mayor.

It has been vacant for several years and was also condemned by the city, said Minkarah, adding that there were two previous, and unsuccessful, attempts to redevelop the 4,500-square-foot brick structure.

This poor track record, coupled with the building’s location and its deteriorated state, made it another target for intervention by DevelopSpringfield, he noted, adding that, while the development community has essentially given up on the property, he sees vast potential.

“The house has a lot of attributes that I really like — it has floor plans that lend it to office use, and, on the whole, it’s structurally sound,” adding quickly that water that poured through two skylights damaged by the 2011 tornado caused significant, but not irreparable, damage.

Crews are currently restoring the large porches on the property and repointing the brick, said Minkarah, adding that the exterior work should be completed this summer, and the focus will then shift to the interior and readying the property for professionals, such as lawyers or accountants.

The price tag will likely reach $750,000, he went on, adding that he’ll try to mitigate that cost with historic tax credits and grants.

As he talked about his agency’s current projects, Minkarah made early and frequent use of the phrase ‘if all goes well.’

It was summoned to qualify everything from the timelines for rehabilitation of the properties to the ongoing search for funding, to the intended future uses of these landmarks.

There are question marks in each realm, and therefore some uncertainty about whether all will go well. But Minkarah is sure that nothing would ever happen at these properties were it up to the private development community, because the bottom line is that these projects don’t make financial sense.

But they do make sense when it comes to this agency’s mission and its desire to undertake initiatives that will be, in a word, impactful for the neighborhoods that surround them.

“If these were properties that were attractive to private developers, they would be developed. But they’re not, and those are the conditions we have to change,” he said. “We haven’t accomplished anything yet, but with these projects, I believe there is a greater sense of hope, a greater sense of what the possibilities really are, a new appreciation of how far we can really take this community.”