Business Growth Center Wants to Build on Past Success Jim White says it was about 18 months ago — or just after BusinessWest published a story on the Business Growth Center, to be precise — when he and partner Gary Stone decided they needed some help and would seek it out.

When asked to be more specific, he said Go Graphix, the specialty graphics company the two had started more than a decade earlier, while doing fairly well, certainly wasn’t where they wanted it to be by that juncture. And the root of the problem, he went on, was that they couldn’t, by themselves, draw a road map to get there — or even pinpoint what there was or should be.

So they turned to the Business Growth Center (BGC), housed, sort of, in the Technology Park at Springfield Technical Community College, and its director, Marla Michael, for some assistance. Michel assembled an advisory panel that met with White and Stone early and often, providing assistance on several levels.

Invited to sum it all up, White said the group, comprised of business veterans across several sectors, implored them to focus — on what they did well, what separated them from their various forms of competition, and where the growth potential was.

In this case, said White, that meant the company’s niche in specialty wrapping, of not only vehicles but also school and business hallways, windows, cafeterias, floors, and a host of other surfaces. The industry term is ‘architectural graphics,’ he said, and while there are many companies that can simply install such products, there weren’t many, at the time, that could partner with clients to create a vision and then make it reality.

“Our customers are looking for the whole package,” White explained. “And these are the areas for which the advisory team said, ‘no one’s there right now; go after it; this is one; make your name there; go for it; be the first.’”

To make a somewhat long story short, the company has followed that advice and, in the process of doing so, seen a roughly 50% rise in revenues over the past year.

The story scripted by Go Graphix is one that Mike Vann and Paul Stelzer want to replicate as they continue to write what would be considered the next chapter for the Business Growth Center.

Michel, a loaned executive from UMass Amherst, has left the center as she returns to the university as a full-time administrator, focusing on the school’s many initiatives in and around Springfield. But Stelzer, a principal with Appleton Corp., which manages the Tech Park, and Vann, a member of the BGC’s advisory board and principal with the business-consulting firm the Vann Group, want to continue the work Michel was orchestrating with many of the region’s smaller businesses. 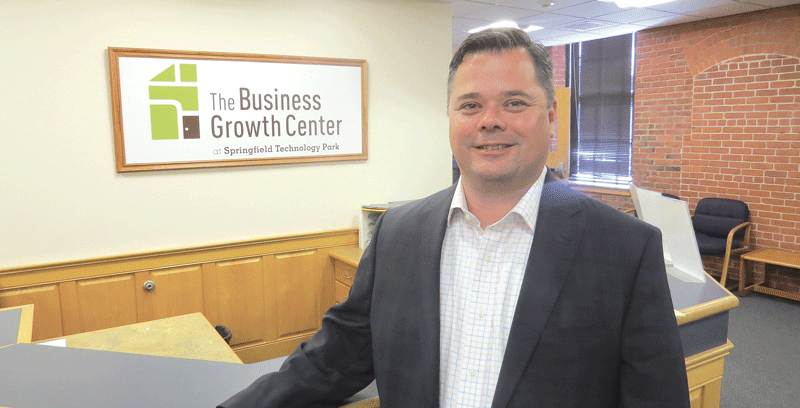 Mike Vann, left, says there are many companies in the region can be benefit from the services of the Business Growth Center, which helped the principals of Go Graphix sharpen their business focus.

Vann said there are many companies at or near the same stage as Go Graphix — with the owners deciding where they want to be and how to get there — and also many more that are facing the thorny issues of succession, or soon will be. And they can benefit from the center, which is more of a service provider than a physical location, although it is technically that as well — the Scibelli Enterprise Center, named after the retired STCC president who conceptualized it.

He added that the BGC’s advisory and mentorship programs will likely dovetail nicely with initiatives carried out by Valley Venture Mentors, which focuses mostly on startups and other groups that are part of what’s being increasingly referred to as an entrepreneurial ecosystem.

Stelzer agreed, noting that, while many pieces still to fall into place for what might be called the new Business Growth Center — everything from funding to a board of directors to a timetable for officially getting started — the picture is coming into focus.

“The Business Growth Center is a program of the Technology Park,” he explained, “and we very much want to continue that program as part of our board’s mission to not simply lease space, but encourage and mentor entrepreneurs and assist small businesses.”

For this issue and its focus on entrepreneurship, BusinessWest looks at the early planning initiatives for this new BGC, and how the organization could become a key element in that aforementioned ecosystem.

The Writing’s on the Wall

Rather than talk about what they do — and, as mentioned, are now firmly focused on — White and Stone decided to show BusinessWest instead.

For that exercise, they decided that a tour of Springfield’s Central High School was in order. There, upon being joined by principal Tad Tokarz, they showed off a number of specific projects undertaken at that sprawling facility.

These include the circular logo incorporated onto the floor at the main entrance — complete with the golden eagle that is the school’s image and nickname — the auditorium and walls outside it, covered over with images depicting the arts; the cafeteria, where one wall features what Tokarz calls the “roadmap to graduation” that the school’s students follow; and the music room, where several walls and doors are covered with genre-specific images.

On the way out, the partners pointed to the bare, wooden press box above the stands at the football stadium, which will soon be done over with similar ‘golden eagle’ imagery.

Go Graphix has done similar work at a number of schools, colleges (Bay Path University is among its many good customers), and businesses across the region and beyond, and orders continue to pour in, said White, adding that this is part of an intriguing niche with considerable growth potential.

Fully exploiting this niche became the simple mission imparted on the partners by a team of mentors through the BGC’s Growth Advisory Program. And along with the words of wisdom came an accompanying — and much needed — dose of accountability, he went on.

“Being held responsible has made a tremendous difference,” White told BusinessWest. “We’re following the plan they helped us put together, and we’re really serious about it.”

There are many companies across the region that could benefit from similar assistance, said Vann, who works with companies of all sizes and across many sectors as a business consultant. And because this need exists, those involved with the BGC want to serve the region by meeting it.

Elaborating, he said the center, which will serve both tenants at the SEC and non-tenants, will be focused on two primary issues — scalability and what he called ‘survivability,’ meaning succession, in whatever form it may take.

There is considerable call for both, he went on, adding that, while entrepreneurs are obviously good at what they do, meaning their specific product or service, they often lack experience when it comes to managing a business and strategically planning for its future. Meanwhile, they also lack the time and capital required to address issues ranging from marketing to mergers and acquisitions. “The company may be successful and have money, but it may not necessarily have the resources in its budget to be able to do these things fully and in the right way,” he explained, adding that the advisory-panel model is designed specifically to fill these voids.

Stelzer agreed, and summoned an often-used phrase to describe what the BGC is ultimately designed to do.

“We want to help people work on their business, not in their business,” he explained, adding that many companies that that have passed the startup phase and are looking to get to the next level (or at least determine what that should be) are certainly challenged in their efforts to do that.

Such was the case with White and Stone in the spring of 2014, when they approached Michel with a request for some assistance.

It came in the form of an advisory panel that not only asked hard questions, but made it clear to the principals that they would not be provided with the answers — they would have to come up those themselves.

“We would come together every six weeks and talk about very specific goals and tasks,” White explained. “We looked at the numbers, how we utilized our resources, staffing — where we’re staffed and how we’re staffed — and other matters.

“And after they really got to know us and understand our business, they helped us put together a strategic plan,” he went on. “We’re experiencing growth, accelerated growth, and much of that, we think, came about because we were able to work on our business.”

Elaborating, he said the advisory panel effectively inspired the partners to abandon, or move on from, a loose strategy of trying to be all things to all forms of customers and instead put the focus firmly on the areas that are most profitable and have the highest ceiling, growth-wise.

“They spent a lot of time helping us determine where the focus should be — where our drive is, what our passion is, and where we actually have good profit,” White noted. “That has helped us get out of certain areas and really double down on those areas that we want to get into — where there’s an opportunity in the marketplace, and where there’s profitability.”

Referencing that entrepreneurial ecosystem once again, Vann and Stelzer said many groups, such as VVM, are designed to focus on businesses that are in what would be considered their youth.

The Business Growth Center — meaning, again, the organization, not merely the physical structure — is concerned with what amount to business “teenagers,” they went on, acknowledging that, as anyone who has lived through those years can testify, they are fraught with challenges.

The answers don’t come easy, as White and Stone can attest, but with support and that aforementioned measure of accountability, businesses can navigate those difficult years.

And that’s why Stelzer, Vann, and others involved with the Business Growth Center have determined that it must continue its work.