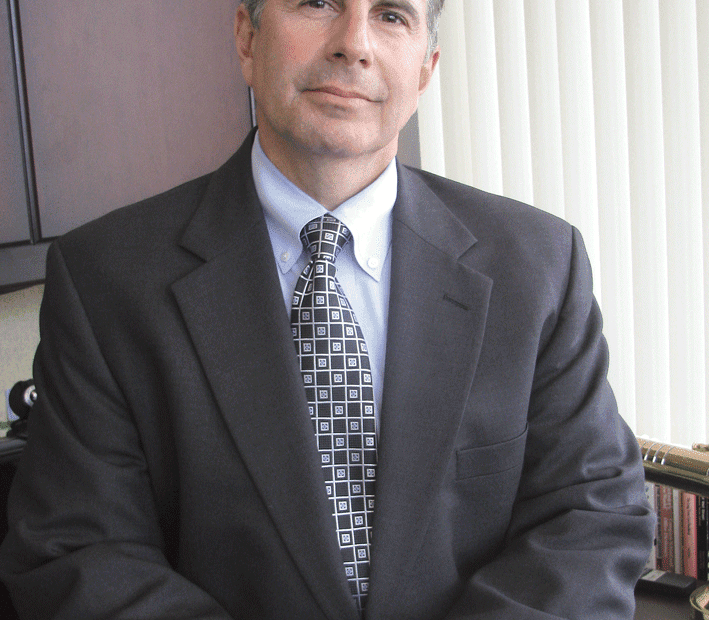 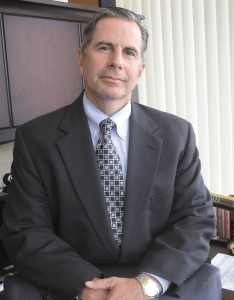 Mark O’Connell says he can usually get from his house in Belchertown to Wolf & Company P.C.’s Boston offices in less time than most of his colleagues who live within the Route 128 beltway.
That’s good, because he’ll be making that trek much more often in the coming months and years as he takes the helm of the century-old accounting firm. He’ll still be working primarily out of the downtown Springfield office that he helped open and that has been his business address for the past 15 years, but he will obviously have more responsibilities as he takes the reins from long-time president and CEO Daniel DeVasto.
At the top of that list is ongoing execution of a long-term strategic plan that has put the company in a strong growth mode, said O’Connell, who assumed his new position on July 1.
Indeed, Wolf was named one of the five fastest-growing CPA firms in the $20 million to $30 million category nationally by Inside Public Accounting magazine, he told BusinessWest, adding that it has achieved such status through a number of strategic initiatives.
These include attaining greater market share in many geographic areas, including Western Mass., as well as within specific sectors of the economy, including the nonprofit realm, manufacturing, family and closely held businesses, and higher education, he noted. Meanwhile, Wolf has succeeded in providing more services to existing clients, he said, adding that the company’s WolfPAC software (a suite of enterprise risk-assessment tools and risk-management plans) has opened many doors and ultimately allowed the company to handle additional needs for clients as well.
Such growth strategies are necessary in areas where there is little economic growth, such as Western Mass., said O’Connell, and also in a regional economy that is in many ways still recovering from the Great Recession, producing an operating environment for accounting firms that he described as “the new normal” (more on that later).
Looking ahead, O’Connell said the company, which has offices in Boston, Springfield, and Alabany, will consider expansion into additional markets in the Northeast and perhaps nationally, and in the meantime will continue to exploit growth opportunities in existing service areas.
And it will do so through continuous promotion of what he said is known simply as the “Wolf culture,” or VIRTUE philosophy, an acronym created by the words vision, integrity, respect, trust, understanding, and excellence.
Overall, he said, this will be an exciting time for the company, and also for him professionally.
“I’m very excited about this opportunity, and am focused on making the transition as smooth as possible,” he said, while praising his predecessor for putting a solid road map in place for the company. “There is not a need for dramatic change; there is a need for continued growth and focus on those efforts, but the core operations of our firm have been humming along very well.”
In this issue, BusinessWest talked at length with O’Connell on the occasion of the arrival of his new business cards with the title ‘president & CEO’ under his name, thus getting some clear insight into where he wants to take this company.

By the Numbers
O’Connell told BusinessWest that, while most of Wolf’s 175 employees work in the Boston office, the company is officially headquartered there, and the president and CEO traditionally works out of that facility, he has no plans to relocate to that part of the state or put his office there.
As he said, he can get to the High Street office quicker than most who live in the Hub and its immediate suburbs, and besides, he grew up in Springfield and enjoys the quality of life in this region.
A graduate of Classical High School and Western New England University, where he majored in accounting, he started at a small firm and eventually moved on to KPMG, which was then one of the so-called Big 6 national accounting firms, and had an office in downtown Springfield.
As the spate of mergers and consolidations that reduced the number of ‘big’ firms continued, KPMG closed its Springfield office in the mid-’90s, and O’Connell went to the company’s Hartford office. He said it soon became clear that, if he wanted to ascend within that firm, he would have to go to New York or another major urban center to do it, and this was not his preferred career course.
“By that time, Wolf had been making some inroads into the financial-services marketplace in Western Mass.,” said O’Connell, “so I reached out to them with the idea of starting an office here.”
Company officials in Boston were intrigued, and a Springfield office became reality in 1997, starting in what is now the TD Bank building. Wolf quickly gained some traction in this region, and the office was eventually moved into larger quarters — ironically, space that KPMG was subleasing out in Tower Square.
Over the years, the Springfield office has achieved substantial growth — it has done particularly well in the nonprofit and higher-education sectors — and the company has made some further inroads in Northern Conn., said O’Connell, adding that, while overseeing the progression of that office, he became part of Wolf’s executive committee.
And when DeVasto announced his intention to retire early this year, O’Connell became one of the candidates to succeed him, and eventually prevailed in what became an extensive search.
The transition process, O’Connell said, will come in many forms. Elaborating, he noted that he will be assuming new responsibilities and direction of the company’s three offices, which will require an inevitable reduction in direct accounting work for clients in his own portfolio.
“I will be keeping some of my clients,” he explained, “but my goal is to reach a balance in the size of my practice that will enable me to keep a good-sized practice but also handle the responsibilities I have as CEO. We have a very professional organization, so the ability to delegate responsibilites to other shareholders in the firm or to our administrative infrastructure should enable me to do that.”
Beyond that, though, he is expecting a very smooth transition at the top, mostly because of the systems and philosophies that DeVasto put into place, the experience he gained while serving on the executive committee, and the simple fact that very little, if anything, is broken and in need of fixing.

Bean Aggressive
And that includes the overall long-term strategic plan, which calls for growth both organically and through expansion into new geographic markets.
“Our firm takes on a niche structure,” O’Connell told BusinessWest. “We have individual niches that are focused on specific industries; some of those niches are going to be able to expand within our existing geographic footprint, and others, especially our financial-services niche, we’ll look to grow through geographic expansion.
“There’s been a lot of consolidation in the banking industry,” he continued. “And as that consolidation continues, we have to go further afield to get the work.”
And while much of the growth strategy involves expansion into new regions — the company recently gained its first audit client in New Jersey, for example — or gaining market share in existing service areas, another component involves providing a wider range of services to existing clients.
And this brings him back to the WolfPAC software.
“This product is sold throughout the country — we have clients using it in Califiornia,” he explained, noting that many banks now use the software. “It has allowed us to gain name recognition in other parts of the country. In New Jersey, for example, we’ve sold several WolfPAC modules, and people would seek us out and ask, ‘can you provide other professional services to us?’
“That’s an exciting way of breaking into the marketplace,” he explained. “From an audit, tax, and risk-management perspective, this business is built on trust, and it takes a long time to build those relationships and gain the work, and this is one way to facilitate that process.”
Looking at the current picture, O’Connell said that, in many ways, the state and this region are still recovering from the recession and its many aftereffects, and this means the accounting profession as well.
Firms had to adjust to a changing climate in which there was little if any new growth, and many ventures went out of business, downsized their operations, or had trouble paying their bills — all key contributors to that “new normal” he described. In this environment, many firms, including Wolf on a small scale, took the opportunity to “rightsize,” as he called it, and many have stayed at the new, smaller size.
Conditions are improving somewhat, he continued, and many accounting firms, Wolf included, are hiring again.
“We hired four people last year, and we will be hiring three more in September,” he explained, adding that another of the company’s challenges moving forward, especially with its intention to grow and expand geographically, is to find and cultivate new talent. “We’re continuing to build a pipeline.”
And as it does so, it faces heavy competition from what are now the Big 4 firms — PwC (PricewaterhouseCoopers), Deloitte Touche Tohmatsu, Ernst & Young, and KPMG.
“We have to sell people on a way of life and a well-defined career path,” O’Connell explained. “But it’s hard to talk a young, aggressive accountant out of wanting to get Big-4 credentials under their belt.”

Firm Commitment
O’Connell told BusinessWest that, for the foreseeable future, meaning until the formal transition process is over, he expects to be in Boston perhaps two or three days a week.
After that, he anticipates being able to reduce his time on the Turnpike, especially with the help of technology, specifically in the form of a new conferencing system.
And beyond putting a lot more miles on the car, he is projecting only a smooth transition and further momentum as the company continues its second century in business. 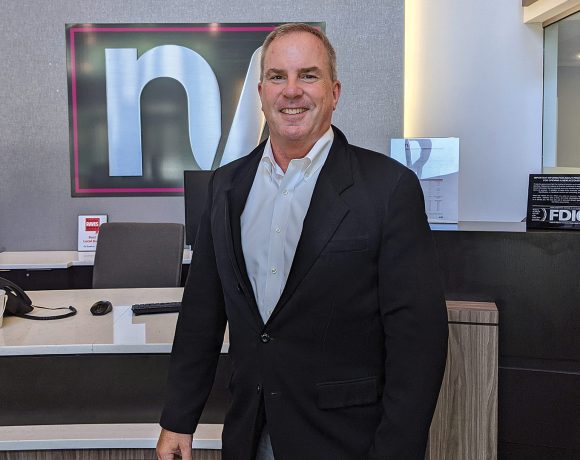