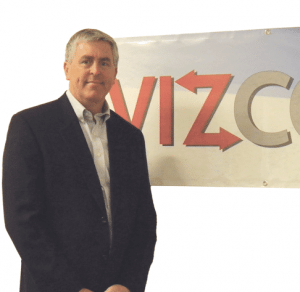 Ed Carroll says businesses, salespeople, or entrepreneurs who are not advertising on mobile devices are losing customers, and his claim is backed up by many studies, including a survey showing that more than 86 million people sought business information last year via their smartphones.
The co-founder of VizConnect in Springfield first became aware of the trend in 2004 when he was working as a television newscaster and Facebook began to gain in popularity. “I saw a paradigm shift taking place away from mainstream media, and one night I began thinking about how businesses could use it because they are completely underserved in that area,” said Carroll, who eventually came up with the idea for the high-tech company he started in 2011 with sales and marketing guru Brian Dee.
The company’s product, a video-based mobile marketing platform, is designed to help small companies or businesspeople keep pace with changes in the way products and services are marketed today.
“Large companies have staffs and people who keep track of trends, but 80% of the economy is small businesses, and they don’t have the budget to do what they need to do to compete in the mobile scene,” Carroll told BusinessWest. “There has been a huge shift to mobile marketing, and everyone in business needs to think about how to get their message onto a mobile device.”
VizConnect has grown quickly, and today is operated by a team of partners who oversee more than 400 distributors. The product they sell has been test-marketed and improved since it was introduced to the marketplace, and most of the distributors came on board in the last six months when the company took steps to grow its sales force, due to enthusiasm about the software.
When people scan a VizConnect QR code or text message a keyword with a code, they come face to face with options that allow them to watch a video, download a coupon, view items on sale or a customer testimonial, learn more about a product or service, communicate directly with the seller, or buy the product. They can access these with a simple click, and after they watch a video, their screen changes, giving them the option of clicking again to share it on Facebook, Twitter, or LinkedIn; calling the company; making a purchase; or anything else the business elects.
“Right now most QR codes go to a static website; we have made them more dynamic,” Carroll said. “Our platform was designed to be a call to action.”
He explained that what comes up on the screen after someone texts to a keyword or scans a QR code can make or break a sale. “Research shows it takes the human mind about six seconds to decide whether to stay or go. It’s a yes or no,” Carroll said.
He added that businesses that fail to use simple techniques to engage customers on mobile devices will soon be left behind. “This is the 21st century, and it’s all about mobile.”
Dee agrees. “Studies show that people never get more than three or four feet away from their mobile devices, and where they get their information drives their decisions,” he said.
VizConnect’s platform costs $60 a month and allows clients to market their products or services in different ways to different audiences, which can include messages in more than one language.
The common denominator is that a customer is immediately given choices. They can click on a window that says ‘see more inventory,’ one that says ‘call,’ or another that prompts them to take a different action.
These options are customized and linked to up to 10 QR codes that can show different videos or display different information. “We have simultaneous multi-messaging so people can target a mailer to a Spanish- or English-speaking demographic. It’s a very versatile platform,” Carroll said, adding that it allows companies to capture the cell-phone numbers of people who visit their site.
“They can legally market to them until they text the word ‘stop,’” he explained, as he used his smartphone to demonstrate the sequence of events. 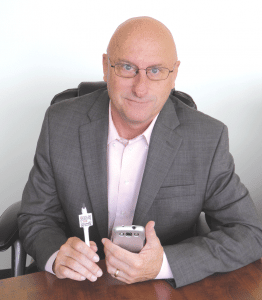 Brian Dee says the company is adding distributors across the U.S. and is eyeing global expansion.

When the VizConnect video platform was first created, the text-messaging option did not exist. “The first year, we only had QR and video,” Dee explained.
But as text messaging grew in popularity, they integrated it into the software. “It allows consumers to have a choice,” Carroll said, adding that the majority of people choose the text-messaging option.
Dee agreed, noting that “QR codes have a place, but the jury is still out on them.”
However, they do serve a purpose. Since they can be created in color, many companies are using them as part of their brand. “We suggest that our customers use a QR code with their logo and the words ‘scan or text to’ a designated code next to it,” Dee said.
The text message prompt and/or QR code can be put on a business card, billboard, refrigerator magnet, T-shirt, or the menu a pizza shop staples onto a box. “The menu could sit in someone’s house for a year, and they could scan it every night to get the dinner special,” Carroll said. Codes can also be saved on a smartphone.
And if a QR code is scanned by just one person, then relayed to any form of social media, it can lead to a great deal of exposure. “If a code gets scanned once, it could be viewed more than 1,000 times by someone who has more than 1,000 Facebook friends,” Carroll said.
However, the texting option is far more popular. “It’s absolutely a key concept of our business and the one the majority of people are using,” Dee said, adding that each customer gets 10 QR codes that are married to a keyword and a short code that goes along with each of them.
Whether the customer sends a text message or scans the QR code, it takes them to the same interface. “Texting is an everyday part of American life, so it’s the perfect bridge for a small business to reach their customers on their smartphones,” Carroll continued, reiterating that it can drive them to a coupon, video, or whatever message or video the company or salesperson wants to project.
In addition, these messages can be changed on a daily basis as VizConnect gives clients the tools to deliver, manage, and store an unlimited amount of video.
“Video engages. It creates a response. It works,” Carroll said. “It’s the most engaging medium that has ever been created because it hits all the senses and invokes an emotion whether someone is visual, auditory, or kinesthetic. Everyone who watches will be stirred to do something. It’s easy to create and doesn’t have to be long to be effective.”
Videos can be created at no cost with the client’s smartphone, and even a six-second video is effective.
“The longer it is, the more boring it becomes. And if you don’t like it, it’s easy to redo,” Carroll said as he picked up his smartphone to make a short video of himself talking. “If you have a restaurant and sell cheeseburgers, you can grab your phone and shoot a high-definition video and tell people it’s a great buy. Or you can serve one to someone and have them say, ‘this is delicious. You have to try it.’ Testimonials are the best way of getting new business, as they give you credibility.”

Spreading the Word
Carroll and Dee sold their product door to door for more than a year, all the while ironing out kinks and improving its efficacy. They also chose a select number of people to help them.
But after incorporating texting into the software, they made the decision to go public last November and offered people a way to join the company by becoming distributors.
They hold informational seminars every Tuesday at 7 p.m. in their offices on the 14th floor of the Sovereign Bank building on Main Street in Springfield for potential customers and salespeople, along with team-building conferences and training seminars.
“We have a direct selling platform, and in this economy, people thinking about starting their own business or developing a way to generate extra income can join us,” Carroll said, adding that they have plumbers, firefighters, and law-enforcement officers working for them.
The company also has six partners — four who are local and two in San Francisco. Carroll, an Associated Press and Emmy-award-winning on-air personality, has appeared on local television newscasts throughout New England as well as CBS Evening News, and spent many years producing and appearing in weathercasts, news features, and special programs.
Dee, the company’s secretary and chief sales officer, spent 20 years in sales, with a focus in sports marketing. His career includes managing credit-card marketing programs for MBNA America and Bank of America in conjunction with the Red Sox, Celtics, Bruins, and Patriots, along with many major college sports teams.
President Paul Coleen was a former bond trader on Wall Street, while attorney James Henderson is treasurer and provides the company with legal counsel.
And they say news about VizConnect is spreading fast. Accolades include the fact that the company was named one of the top five technology start-ups to watch by Mass. High Tech and the Boston Business Journal last year.

Moving Forward
As the smartphone industry explodes, Carroll and Dee expect their business to continue growing. “It’s comes down to this: smartphones are where people go to get information to make a decision,” Carroll said.
Dee concurred. “We’re excited about the future as we continue to add distributors across the U.S. and eventually look forward to international expansion.”
Which makes perfect sense, with multilingual options and a product designed to keep pace with the times.

Attendance Surging, the Big E Looks to the Future