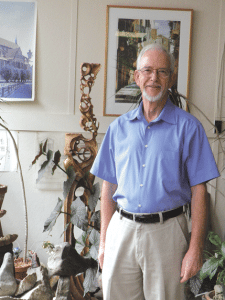 Siegfried Porth says he has seen an upswing this year in additions, renovations, and new homes.

John Kuhn says the number of projects on his firm’s books has increased over the past year. However, “I don’t expect to go back to the glory days,” added the president of Kuhn Riddle Architects in Amherst, adding that clients today are more cost-conscious, conservative, and careful than they were prior to the economic downturn in 2008. “But, lately, business has been good.”
Walter Cudnohufsky of Walter Cudnohufsky Associates Inc. in Ashfield agrees, and describes the upturn in business as noticeable and positive. “We have a number of new residential projects,” he said, noting that the jobs are significant because work in real estate dried up for a long period of time. “Things began to pick up last year and have gotten better this year, and our work now also includes municipal and industrial projects.”
After weathering a difficult period, Tom Douglas of Thomas Douglas Architects Inc. in Northampton is also busy again. “Things started to even out about six months ago and really improve, and we have more work now than we can handle,” he said. “People are more willing to spend, and it seems as if access to money has become easier. It takes longer to get funding in place, but people are doing it. We’ve done design work for a lot of restaurants, and there has also been a significant increase in residential work.”
Siegfried Porth of Porth Architects in Easthampton concurred. “Right now I am straight out,” he said. “There has definitely been a big upturn in demand in the last year for new residences, additions, and reconstructions. And some of the jobs I have are major — $300,000 or $400,000 home additions. Ultimately, it’s cheaper to add on if you like where you live and have enough land.”
Bruce Coldham said that, although housing has always been his firm’s mainstay, jobs at local colleges have helped sustain the workflow over the last year. There have also been renovations of homes and office space, as well as projects requested by institutional investors who own multi-family dwellings and want to improve energy efficiency or stay in compliance with changing building codes.
“They are not all poster projects,” said the principal of Coldham & Hartman Architects in Amherst. “But business has been improving slowly and steadily, and we keep getting clients. Some of our colleagues were hit harder than we were, and many architects have had to move from one firm to another.”
Kuhn agrees. “Some people were hit worse than others,” he noted. “We felt the effects of the downturn, but not that severely. Work has been steady, but it’s very competitive.”

Staying Solvent
Indeed, the uptick in project volume hasn’t come about overnight. Several years ago, Porth said, there was so little work that 60% of the architects in Boston were laid off, and many firms went out of business.
And Douglas referred to 2009 and 2010 as “pretty lean times. We had to lay off one person and reduce some employees to part-time, but we had enough work to make ends meet. We were fortunate to get a few new jobs back then.”
One project, involving the renovation of three buildings in Greenfield, was made possible due to historic and new-markets tax credits. Others combined volunteer labor and paid work, including Northampton’s Academy of Music and Forbes Library. “I helped them raise money,” Douglas said.
His firm has also done much work at Smith College, although those jobs dwindled in 2009 and 2010. But the situation wasn’t disastrous, as Douglas used the time to renovate the building he purchased in 2009 that houses his business today.
In 2010, he was hired to design a renovation of the Garden Theater in downtown Greenfield. “Unfortunately, they were unable to pay the bulk of the fee,” Douglas recalled. “It was a very difficult year.”
The picture was similar across the board.
“It was like being on a rollercoaster,” said Douglas. “We would have an incredibly heavy workload for six months, then spend six months not knowing if we would get work. It was very, very difficult to project further than four to six months out.”
There were also an untold number of architects seeking employment. “They were willing to work part-time, and there was a lot of great talent out there. But it was very difficult to project how much work you would have,” Douglas said.
Cudnohufsky also suffered. He had to let several employees go and said it took “heroic efforts” to save his company.
Kuhn said the entire construction industry was hit, and in addition to the loss of any work in certain sectors, many projects were put on hold. 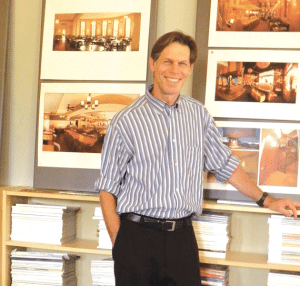 Tom Douglas says business is increasing, and so is the diversity of projects his firm is tackling.

Coldham said he is happy that he was able to retain employees, thanks to programs that allowed them to collect partial unemployment benefits. “It meant we could keep everyone until work resumed,” he said, adding that the extra time off allowed at least one employee to complete a graduate degree, and once things improved, he was able to add two people to his staff.
And although the outlook is brighter, many architects feel it is too early to project whether demand will continue to rise.
“But people are building and investing in their properties again,” Porth said. “Things didn’t look very good last Christmas, but this has ended up being a very fine year. Business has been slowly picking up, and right now I have 40 jobs in process.”
Douglas agreed. “The work is slowly starting to pick up,” he said, adding that his firm is now doing a lot of design work for restaurants and hotels.
Still, there are no guarantees. “There has been a definite improvement, but it is not meteoritic by any means,” Coldham said.
Kuhn concurred. “When people take a big hit, it takes years for confidence to come back,” he said.
“Everyone is a little more gun shy.”

Varied Workplace
Today, architectural services are being sought for diverse projects, another trend that bodes well for an industry that saw many sectors fall back or nearly shut down during the recession.
“We just bid on a renovation in North Adams for a group of railroad warehouses,” Douglas said. “We’ve also done three or four restaurant interiors in the past six months, and are wrapping up a new conference-center building in Hadley. We designed a new restaurant in Worcester, and are working on the renovation of a conference center for Smith College and a project for Northampton Arts Trust, which will include a new theater, performance space, and galleries in a building they are purchasing.”
Porth’s working portfolio includes projects in Holyoke and the conversion of an Easthampton tractor-trailer building into a multi-use structure. “We’re also converting an old warehouse into multi-use space and renovating a five-story factory building for commercial purposes,” he said, adding that the projects are large and include new walls, electrical, heating, and other improvements.
Porth is also the architect for the Eastworks Mill in Easthampton. “Half the residential units on the top floor are rented, and we’re starting phase 2,” he said, explaining that the units were designed as live/work spaces so entrepreneurs can operate home-based businesses in them.
Porth is also involved with ongoing projects for Open Square in Holyoke and has four major residential projects — additions and renovations — on the books as well.
“A lot of people are adding in-law apartments or family rooms, and we’re building a huge wine cellar in one home,” he said. “Plus, we just got work today on a new office building in Easthampton. There will be offices on the first floor and residential space on the second floor.”
Other jobs include designing a 160-by-120-foot metal building in Holyoke that will be used to service trucks and a new, two story office building in Florence.
Cudnohufsky is also busy. He began work on Main Street in Great Barrington in 2009, and that project has been ongoing. Other large regional projects include Monument Mills in Housatonic, which consists of several buildings totaling 250,000 square feet, and the design of a major structure in Fitchburg. He also has jobs in New York and Boston. “We have a whole range of work on historic properties, which gives us a really nice mix.”
Markets that have undergone a revival include the restaurant business. “We’ve seen a real upswing in people wanting to put money into them recently,” Douglas said.
And other sectors are growing as well, Porth said. “People are buying commercial buildings in Northampton, Westfield — everywhere in the Valley. Holyoke is up and coming, and people are buying mill buildings in Easthampton, so there is a lot of ongoing activity.”
Coldham’s firm tends to work with clients creating spaces heavily populated by people, such as schools, libraries, and offices. “If people like the space they are in, they tend to stay at their jobs longer and are more productive, which are benefits that come from high-performance buildings,” he said.
His company’s projects range from a new development with more than 20 homes to the transformation of a 100-year-old, five-story mill building in Lawrence into 60 residential units.

Moving Forward
Designs today almost always involve green-building concepts, and one noteworthy trend is the demand for reasonably sized, energy-efficient homes.
“The new generation wants to be green, and we are drawing a lot of smaller houses, due to the cost,” Porth said. “We used to design McMansions that were 5,000 or 6,000 square feet, but today the trend is to go smaller. People want energy-efficient homes that are no larger than 2,500 square feet.”
Cudnohofsky founded and ran the Conway School of Landscaping Design for 20 years and says his firm has always been at the forefront of sustainable ideas and projects. He told BusinessWest that green building has been fueled by revisions in building codes that keep the technology moving forward.
Douglas agreed, adding that salespeople tout how much recycled material their products contain or where their furniture was made. “Material suppliers volunteer the information. You don’t even have to ask about it.”
Kuhn said the combination of new stretch codes and people’s sensitivity to energy conservation has resulted in a new norm. “The standards keep getting much more stringent,” he said, adding that new developments have gone from LEED to net-zero building to the Living Building Challenge, which encompasses the most rigid green-energy initiatives that can be put into place. However, few projects that meet those standards have been done locally, because the work is complex and not financially feasible for most clients.
Coldham & Hartman has completed several co-housing projects and earned recognition for innovative work across the nation. It is one of the only local firms that has built zero-net-energy homes, which generate as much energy as they use. “We’ve done four or five of them,” Coldham said.
However, some jobs continue to be expansive as Baby Boomers seek modifications to their homes. For example, Porth designed a 2,000-square-foot addition for an aging couple who wanted a master bedroom on their first floor. “People are also putting in elevators so they can stay in their homes,” he said, noting that some families are selling their parents’ homes and creating space for them via renovations or additions.

Changing Climate
Kuhn believes changing trends will continue to shape the architectural industry. They include a focus on building within walking distance of downtowns, which has occurred in communities and cities such as Amherst and Northampton. “It’s a more green way to develop,” he said.
It’s also one that promises ongoing work for architects who have weathered the storm of the past few years and are now reaping the rewards for their perseverance and resourcefulness.
For a sector that feels the swings in the economy perhaps more than any other, times are better, and the arrow is pointing up — and firms are intent on making the most of their opportunities.