Tech Foundry Aims to Build a Skilled Workforce — and More 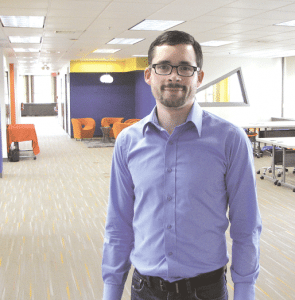 Delcie Bean, president of Paragus Strategic IT and founder of Tech Foundry.

Paragus Strategic IT, by any measure, is one of the Pioneer Valley’s recent success stories, a fast-growing technology firm that’s getting set to move into a brand-new building in Hadley, having long outgrown its current location.

In fact, said its president, Delcie Bean, the firm would like to grow even faster, but that’s not always possible, because of the difficulty finding the right talent. It’s a story other business owners have been telling as well.

“We have been struggling with staffing for a long time, as has everyone else in the area,” Bean said. “We thought it was just us because our requirements are so stringent, and that’s why we’re having trouble hiring people. But it turns out everyone is looking for the same people but can’t find them — MassMutual, Baystate, Health New England, and smaller places like MassLive, Mobius, and Entre. They’re all having the same problem — they can’t hire. And that impedes growth, it impedes service, it impedes research and development.”

So, about a year ago, Bean started writing down ideas to tackle the problem — on a napkin. “I still have that napkin somewhere,” he said. “I wrote what the problem was and how we can go about solving it.”

The problem, in very specific terms, is that most people applying for available jobs, with IT firms and in other industries, lack not only the necessary skills, he noted, but also a certain level of professional acumen. “They don’t know customer service, they don’t know how to fill out a résumé or cover letter, they can’t interact with people well or write a business-formatted e-mail. Even the ones who have the technical skills, we can’t hire them because they aren’t ‘people people,’ they aren’t professionals — they’re not employable.”

“It’s not just a problem in the IT sector,” he reiterated. “Many sectors in Massachusetts are saying the same thing; they can’t find entry-level employees who come to the table with professional skills. We’ve seen it in precision manufacturing, financial services, healthcare — a lot of the sectors we work with say they have the same problems.”

From those napkin scribblings, however, emerged a possible solution, an ambitious workforce-development program Bean calls Tech Foundry. The goal of the new nonprofit, which will soon complete almost $500,000 in fund-raising for a one-year pilot project, is to train unemployed and high-school-age individuals and match them with the very precise needs of area companies.

“A lot of existing workforce-development programs use a broad-based curriculum, with all the kids learning the same stuff in the same way, then demonstrate what they know by taking tests,” he said. “I had some very frank, open conversations with the community colleges, and they admitted what they’re doing well and where they can improve. They admitted that, in many ways, they’re not equipped to handle what some sectors are asking for.”

The ambitious, innovative Tech Foundry is seeking nothing less than a game change when it comes to training workers and keeping them in a region that has been bleeding talent for a long time. It’s an idea with ramifications for not only education and workforce development, Bean said, but overall economic growth in the region as well.

And it all begins by earning badges.

Backing up a little, Bean interviewed a number of companies about their needs and asked them to be very specific. “Customer service? What exactly does that mean? So I asked for 15 things they want applicants to know how to do. Same thing on the technical side — they say they want someone proficient in Excel, so I made them explain exactly what they want them to do in Microsoft Excel.” 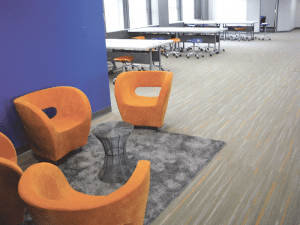 Tech Foundry distills these specific needs into badges students in the program can earn by learning the designated skills, not unlike in the Boy Scouts or Girl Scouts. “This badge means they can do these 25 things in Microsoft Excel. If people want them to do other things, there will be another badge we’ll call Intermediate Excel, or Excel 202.

“It allows us to have a common language between employers and people training future employees,” he continued. “Everyone will be on the same page. Right now, we’re misaligned, and this forces us all into one set of agreed-upon skills as we define what each position needs.”

The core idea of Tech Foundry, then, is to use those very specific badges to match job seekers with available jobs.

“We built what we call an engine — a real-world, scalable, real-time model for delivering education,” Bean said. “Say Paragus wants to hire two people. We’d log onto the engine and post the job and a list of badges associated with that position. Then we’d specify when we plan to hire, how many we want to hire, a couple more criteria, and hit submit.”

The end result, he told BusinessWest, resembles not so much a traditional want ad, but something more akin to a manufacturer placing an order for an item: “I say, ‘here’s the part I need; here’s my specific timetable,’ and that part is delivered to me.”

Meanwhile, students in the program will see these requests come up on the engine and get a feel for what they need to accomplish to find the ideal career. “They become aware of market demand and can tailor their education to meet that demand. Maybe a position opens up, and you have 80% of the badges already. You say, ‘I like that company, I like the pay, and I know what I need to do to get where I need to be for them to hire me,’ and you focus your time on getting the remaining badges.”

“We’re going to show kids how to get a $40,000 job right out of high school — to earn a living wage,” said Bean, who famously launched his company when he was 14 and bypassed college to focus on growing it.

While some of the careers Tech Foundry graduates achieve won’t require a college education, he noted, for those that do, many participating companies are expected to offer tuition-reimbursement plans for night school, weekend study, or an online degree. “Why not get your professional education on someone else’s dime? Your education is tailored to the career path you love, you’re doing the work and getting a paycheck at the same time — you’d be crazy not to do it.”

Bean envisions an engine where hundreds of Tech Foundry graduates are seeing precise company needs in real time and constantly making matches. In fact, Bean would like to target four or five groups of career seekers — unemployed people, veterans, young people with some college experience who dropped out, high-schoolers, and — possibly — parolees trying to get a fresh start after jail time. But he can’t serve all those groups right off the bat.

“We decided to pick one for the pilot, and that’s high-school kids,” he said, noting that the initial idea was to teach them job skills, confidence, and professionalism over several years. The problem is that a pilot of 100 students over four years would cost between $3 million and $5 million in personnel and other resources, and Bean thought it unlikely that he’d secure that level of funding for an unproven concept.

So, instead, he’s launching a one-year pilot program involving 25 teenagers, all entering their senior year of high school this fall. It will cost $482,000, most of which has already been raised — mainly with small donations, although larger ones, like $50,000 from MassMutual and $125,000 from an anonymous donor, helped a great deal.

The pilot will essentially be an accelerated version of the program, with the 25 students — who have already been chosen from around 100 applicants — taking part in a six-week curriculum starting July 7 and running through mid-August.

When school starts in the fall, Tech Foundry will essentially become an after-school program, with the participants studying there five to 10 hours a week until graduating in the spring. After that, they will be placed among 15 companies that have committed to participating in the pilot.

“That will be the proof of concept we use to fund-raise, to show that we’re economically viable,” he said, before scaling the project up to 100 participants at a time, from the different demographics he mentioned. Teachers have already been hired, as well as an executive director and director of operations.

Tech Foundry has leased the ninth floor of Harrison Place in downtown Springfield and spent $40,000 renovating it to resemble a Silicon Valley workspace, with brightly colored paint and carpeting and what Bean called “a funky-cool café and weird furniture. It’s a very creative and engaging place. It’s Googlesque.”

Speaking of Google, Bean is thinking big when it comes to the regional economic-development potential of his new enterprise. He noted Cambridge’s tech explosion convinced companies like Google, Microsoft, and Amazon, as well as a number of smaller firms, to set down roots there and generate a critical mass of growth. “They produced 10,000 new jobs in three years. Those are insane numbers, crazy numbers. But it’s been done elsewhere — Raleigh, Austin, New Orleans, Denver … it’s happening all over the country.”

But it only happens where there’s a skilled workforce, because the big players are desperate for talent, he said. And the presence of a Google or Microsoft will help the region retain the talented graduates from UMass and other regional colleges who have been packing up their degrees and leaving for better, higher-paying opportunities than are available here.

“That will solve what people thought was the original problem, the brain drain,” he explained. “We’ll be able to keep UMass graduates because they’ll be able to work at these brand-name companies right here.”

Pieces in the Valley

The catalyst for achieving all that, Bean stressed, is a skilled workforce.

“We all know we have a low cost of living here, tons of infrastructure, a great lifestyle, access to the outdoors — we have all these assets,” he said. “But without a catalyst, we can’t sell those assets. That’s what Tech Foundry is trying to do, to build that catalyst.”

In fact, he added, Greater Springfield has the potential to become an even more promising hub than those other cities he mentioned. “We’re right between Boston and New York, we have an airport in Hartford, we have the computing center and low-cost electric in Holyoke … this is a phenomenal region.”

He believes Tech Foundry will be the first step in keeping more talent in a region with so much to offer. For promising high-school students and eventually others, the project may prove to be a vital link to a lucrative, satisfying career.

“They’ll see the data in real time,” Bean said. “They will know what the market demand is, and they’ll know, in very specific terms, what they need to do to get to the level they need to get that job.”

And, like other local businesspeople who have volunteered to be part of the training starting in July, he’ll be right in the middle of it, teaching some of the classes himself.

“I’m excited that I get to work with these kids,” said someone who understands youthful ambition better than most. “I’m so passionate about this.”