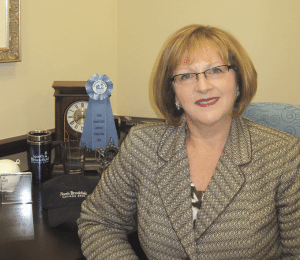 Donna Boulanger says the merger makes sense because both entities are community and mutual savings banks with similar customer-service philosophies.

Two area mutual banks that serve local customers and small businesses — and are active in their communities — are joining together to form one larger bank.
North Brookfield Savings Bank (NBSB) in North Brookfield and FamilyFirst Bank in Ware have come to a definitive agreement to merge into a single mutual savings bank. Once the merger is finalized, the combined bank will operate under the name and charter of North Brookfield Savings Bank.
NBSB President and CEO Donna Boulanger said the merger makes sense because both businesses are community and mutual savings banks with the same customer-service philosophy. She believes the transition will be seamless, and customers can expect the same services they have always received from both banks.
“FamilyFirst is a neighbor, but we don’t overlap with our branches,” she said. “This will expand convenience for both FamilyFirst and North Brookfield Savings customers.”
Currently, NBSB has offices in North Brookfield, West Brookfield, Palmer, and Belchertown. FamilyFirst Bank operates branches in Ware, the Three Rivers village of Palmer, and East Brookfield. All seven of the offices will remain open after the merger.
“The benefit to our customers is that there will be additional branches and longer hours,” FamilyFirst President and CEO Michael Audette told BusinessWest. “We’re pleased that all branches will remain under the name of North Brookfield Savings Bank.”
Both banks have been servicing area customers for several generations. NBSB was founded in 1854, and FamilyFirst, formerly Ware Co-operative Bank, opened in 1920 in the back of a pharmacy on Main Street in Ware. Ware Co-operative Bank changed its name to FamilyFirst Bank in 2007.
NBSB has more than $200 million in assets; once the merger is finalized, the assets of the two combined banks will rise to more than $260 million. Besides the additional assets, Boulanger said the integration of the three FamilyFirst branches will give North Brookfield Savings “a larger geographic footprint” in the area.
The two banks started talking about a merger when Audette approached Boulanger in August. He felt the two banks were a good fit in a highly competitive banking climate.
“It’s difficult to grow a bank organically in this competitive market,” Audette explained. “One way to do that is through mergers and acquisitions. Mergers of mutual institutions happen because you have a similar mission or culture or customer base. We had the opportunity to merge banks that are similar in our mission, and we went for it.”
Audette concurred. “We have complementary branches; our branches are next door to their branches. My board of directors wanted the bank to remain as a community bank and a member of the community and keep our employees. It’s a good thing for both of our banks, and we look forward to it happening.”
The transaction still needs to be approved by the corporators of North Brookfield Savings Bank and the shareholders of FamilyFirst Bank, as well as the banks’ regulators. Boulanger and Audette hope the merger is finalized by the end of the first quarter or the beginning of the second quarter of this year.
Once the merger is completed, it is expected that North Brookfield Savings Bank will retain the majority of FamilyFirst Bank’s employees for a total workforce of 73 spread across the seven bank branches.
According to Boulanger, NBSB will continue to provide the same services it always has, which include personal and business banking products, including mortgages, automobile loans, and small-business loans.
Audette, who will retire after 40 years in the banking business, said the new North Brookfield Savings Bank will also incorporate FamilyFirst’s farm loans by the Farm Service Agency, a division of the U.S. Department of Agriculture.
Boulanger, who has been president and CEO of NBSB since 2008, was recently elected to the board of directors of the Federal Home Loan Bank of Boston. She noted that North Brookfield Savings Bank has received the highest Five Star Superior Bank rating from Bauer Financial for 74 consecutive quarters. The bank was also recently accepted into the U.S. Small Business Administration’s Preferred Lenders Program, which Boulanger said streamlines the process and approval of SBA business loans.
“We have a good commercial-lending team,” she said. “Commercial lending will continue to be a focus of ours after the merger.”
Since North Brookfield Savings Bank and FamilyFirst Bank use the same core technology provider, Boulanger believes the integration of the banks’ technology should be an easy transition and will not disrupt customer service.
“It should go smoothly,” Boulanger said of combining each bank’s technology. “There’s a conversion process, but I think it will be seamless.”
NBSB currently offers online banking, bill paying, and e-statements. Boulanger said she would like, in the future, to include mobile banking to the roster of online services.
Having more branches will make personalized banking more convenient, she added, noting that many people still like to transact their business in person at a bank branch, and FamilyFirst customers “will use the same teller and customer-service system” that they did before the merger.
“There will be no difficult learning curve,” she said. “It’s all about relationships. We’ll bring our services to new customers and serve our existing customers as we always have. It’s all about giving the customer more choices and convenience.”
Boulanger and Audette are looking forward to the new North Brookfield Savings Bank becoming more involved in community service. Both banks have been involved in a number of community efforts over the years. Just this year, North Brookfield Savings Bank created its “Our Community Is Where It’s At” fund-raiser for the North Brookfield chapter of Hearts for Heat, the Belchertown Senior Center, and the Palmer Senior Center.
“A larger bank can do more for the community,” Audette said. “Both of our banks have supported the community through volunteerism. We support a variety of local entities.”
Added Boulanger, “our employees do a lot of volunteering, and we’ll continue to do that in Ware and expand to Palmer and East Brookfield.”