Three Rivers Looks to Get on the Right TRACK

Dave Golden was proudly showing off artwork created by Palmer public-school students in a room in the North Brookfield Savings Bank in Three Rivers.

The exhibit has been on display only several weeks, but it has already sparked interest, and other artists have approached Golden, the branch manager, to ask if they could exhibit their own work there. He says the art show is part of a collaborative effort to transform Three Rivers into a thriving center for the arts.

“I’ve partnered with organizations that are working together to bring arts to the village; we want to beautify Main Street and fill empty commercial spaces,” Golden said, adding that he is talking with a property owner about having a mural painted on a wall across the street from the bank.

Members of On the Right TRACK say the popularity of the Palmer Historical Cultural Center indicates that a creative-arts economy could help revitalize Three Rivers.

There are myriad examples of this movement and the momentum it is creating, including Palmer Historical and Cultural Center Inc., or PHCC, which stages performances in Harmony Hall that include concerts by international and national musicians; plays by local theater groups; lectures; and a variety of workshops.

Collectively, they show the potential of the creative arts as a revitalization tool. The PHCC, for example, is just a few steps from the bank and a number of vacant storefronts that could be made available to artists on the half-mile stretch of Main Street.

But a lot more will be needed to realize the vision, and the timing is critical.

“Main Street has fallen victim to the economic downturn, and modern shopping habits have made it difficult for small businesses in the village to survive,” said Alice Davey, director of Palmer’s Community Development Department. “We realize that if action is not taken immediately to reverse this trend, the commercial area of Three Rivers will be lost forever.”

Town Manager Charlie Blanchard concurs. “Three Rivers was once a thriving community, but that has changed over the years,” he said, explaining that the village came into existence when manufacturing plants were built on the riverbanks in the 1800s and early 1900s.

“But until that time, hundreds of employees went to local restaurants for lunch and shopped at the hardware store, grocery store, furniture store, and clothing store,” said Davey. “They patronized the local bank and had their hair done at the local barbershop or hairdresser.”

That ended when Tambrands left the area. “The customer base shrank, and slowly, one by one, businesses closed,” Davey told BusinessWest, adding that people began frequenting big-box stores and using the Internet to shop.

Today, the former Tambrands factory has become the Palmer Technology Center, and although it houses about 20 small businesses, Davey said they don’t come close to employing the hundreds of residents who once worked in the building.

In addition, 41% of the existing storefronts on Main Street are vacant, and the businesses that remain are struggling. “Some Main Street building owners are finding it impossible to find commercial tenants, so they have resorted to converting spaces into residential units in order to have sufficient income to cover their expenses,” she told BusinessWest, adding that fewer people go downtown, and last October, an anchor restaurant closed, due in part to its customers’ concerns for personal safety after dark caused by poor lighting in the area.

But officials hope that is about to change via a consortium called On the Right TRACK (the acronym stands for Three Rivers Arts Community Knowledge). Partners include the bank, Palmer officials, the PHCC, the Three Rivers Chamber of Commerce, the Palmer Redevelopment Authority, and the Quaboag Valley Community Development Corp.

These organizations had known for a long time that something was needed to revitalize Three Rivers, and efforts to that end began in earnest when the Quaboag Valley Community Development Corp., a nonprofit that assists businesses with training and other resources, held a number of public hearings to get input from residents as to whether they believed building upon the cultural and creative economy would attract visitors.

“There is a long history of pride in the cultural resources of Three Rivers that dates back many years,” said Executive Director Sheila Cuddy.

Daniel Slowick of the Palmer Redevelopment Authority agreed, and explained that the village contains many families of Polish and French descent who came to Three Rivers to work in the mills. “One of the hallmarks of the Polish culture was the establishment of Pulaski Park, which draws Polish fans from all over the country who come here every weekend from May to September to hear the bands,” he said, adding that the cultural heritage of the French and Polish has been kept alive. 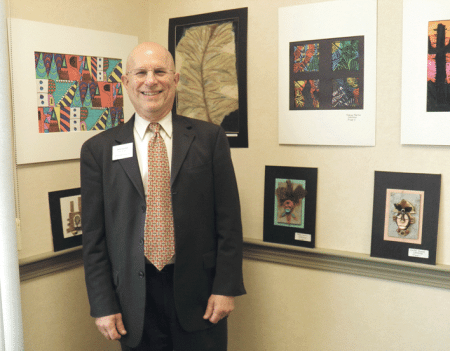 Dave Golden shows off some of the student artwork on display at North Brookfield Savings Bank.

Three Rivers’ first major arts venture was established in May 2012, when the PHCC purchased a former church building for $1 with the intent of preserving its historic character and using it as a place to stage performances that would appeal to a diverse group of people.

“We began holding programs in the fall of 2012, and since then we have rented out the space to outside groups, such as Monson Arts Council, who staged a play here,” said PHCC President Robert Haveles.

The nonprofit has been highly successful, and Haveles said it is sought out by national and international performers and has built an e-mail notification list of more than 1,100 people in the two and a half years since it opened.

Other agencies had also been working on revitalization efforts, and in January 2014, the Three Rivers Chamber of Commerce begun putting together a business program that will be launched this year.

“We will provide three months of free rent to new or relocating businesses that will be matched by the building owners. The new businesses will also be provided with a laundry list of professional services donated by members of the chamber, including printing, graphic design, and legal and accounting help,” said chamber spokesperson Renee Niedziela. So far, four landlords have agreed to participate, and the chamber hopes to sponsor two businesses this year.

At about the same time, the Palmer Redevelopment Authority made arrangements with Maple Tree Industrial Center to provide small businesses with free rent for a year, supplemented by a five-week business-planning course offered by the Quaboag Valley Community Development Corp.

But it took nine months before the two groups became aware they were developing similar programs independently.

“That all changed a few months ago,” Slowick said.

When Davey found out about the different efforts taking place, she applied for assistance from the Massachusetts Downtown Initiative, and received funding that will be used to conduct a market study.

Then, when the Mass. Cultural Council announced it was taking applications for the Adams Arts Program, which supports projects that revitalize communities through the creation of jobs in creative industries and engagement in cultural activities, Davey and Cuddy got together and decided it was an ideal opportunity for Three Rivers because of the success of PHCC and the fact that other communities have been successful in using the arts as an economic driver.

A partnership was formed among the Quaboag Valley Community Development Corp., the PHCC, the Three Rivers Chamber of Commerce, and the Palmer Redevelopment Authority, which led to the On the Right TRACK project.

It was submitted last month as part of the application for the Adams grant, and if the town receives the money, it will be used to establish a website and pay for marketing and other costs related to the project.

But interest has already been piqued, and attendance was high at public meetings held in April. “People are genuinely excited about using the arts as a revitalization tool,” Davey said.

Niedziela says it’s amazing to have so many groups working together on a project that holds unlimited potential.

Slowick concurred, and added that the Palmer Redevelopment Authority has the ability to apply for grants from the Dept. of Housing and Community Development that could include money for an enhanced streetscape, which would complement the park that is within walking distance of Main Street. “Each group involved in this brings something different to the table, and the consortium is pulling it all together to make it happen,” he said.

“We’re really excited about bringing cultural opportunities to residents and visitors,” Cuddy said, explaining that her organization plans to work with landlords to help them view their properties in a new way.

Which will definitely help this effort to put Three Rivers on the right track. 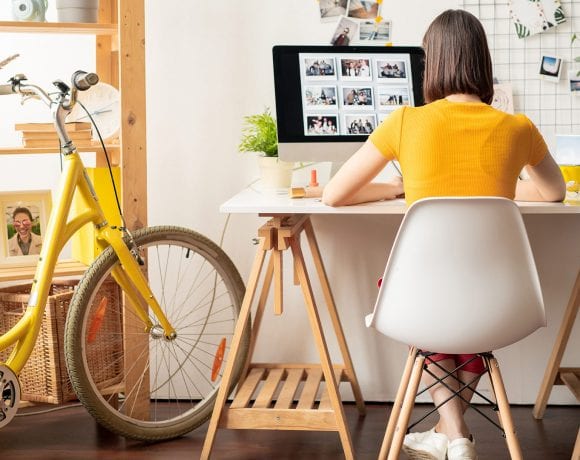