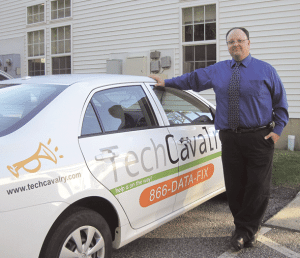 TechCavalry, acquired in 2012 by Innovative Business Systems, allows Dave DelVecchio and his staff to assist small businesses and individuals with their IT issues.

Late one night at the University of Central Florida, young college student Dave DelVecchio was discussing the movie Ferris Bueller’s Day Off with his roommate, but the two couldn’t recall the first name of Ferris’ best friend.
Racking their brains at 2 a.m., the students did the only thing they knew how to do back in 1989: they called local radio DJs, and after a few attempts, they found one who knew the character’s name (it was Cameron).
Fast-forward 25 years. Just last month DelVecchio was at Fenway Park, and a friend asked where a particular player hailed from. Within 20 seconds, DelVecchio picked up his smartphone and found the answer on Google.
Google — a word that would have drawn blank stares in 1998 — is not only the name of the world’s most ubiquitous search engine, but also a verb; people spend major portions of every week ‘Googling’ answers to questions of various levels of importance.
DelVecchio’s college example of how much more information people have at their fingertips today is reflected in his favorite saying: “that’s why you have a data plan.”
As president of Easthampton-based Innovative Business Systems (IBS), a 23-year-old IT-solutions company — and the parent company of newly acquired TechCavalry — DelVecchio and his four partners are tasked with finding solutions for businesses and individuals to access data, at home or at work.
Through IBS specifically, DelVecchio and his team can provide expertise and resources to meet a client’s information-technology needs, or operate as the IT department’s best resource.

Offering examples, DelVecchio cited a local bank that IBS helped cut server recovery time from eight hours to 45 minutes, and a local nonprofit for which the firm helped move an underperforming peer-to-peer network to a server-based environment complete with mobility solutions.
Additionally, since acquiring Northampton-based TechCavalry in 2012, IBS has grown from 13 to 27 employees and, through that new entity, can provide individuals and smaller businesses (50 employees or fewer) with project-based IT solutions to retrieve their data and protect it cost-effectively.
“It was an opportunity for us to position TechCavalry to serve an underserved segment of the market,” said DelVecchio. “All these technology advances have provided new and sometimes far-more efficient ways to get access to information. It’s not about turning the screwdriver and fixing the problem; it’s about providing consultative analysis and weeding through all the options to make the smart choices for a business.”
For this issue’s focus on technology, BusinessWest talked with DelVecchio to learn more about how he and his team have grown IBS, and now TechCavalry, and how both firms help business owners and individuals cut through the advertising clutter to find the best data solutions.

Next Generation
DelVecchio was a marketing graduate fresh out of college when he landed his first marketing job in 1994 with Bill Tremblay, the former owner of IBS, and on the first day of work had to be shown how to use a mouse.
DelVecchio, who jokingly said he’s now mastered the mouse, often uses a quote from Tremblay, from whom DelVecchio and his four partners later purchased the company in 2003: “computer hardware is the necessary evil to run the software that runs your business.”
As he talked with BusinessWest, DelVecchio explained that Tremblay, an IT project manager at Kollmorgen, started a small software-development company in 1987 and incorporated in 1990. His philosophy was that the company was supporting not just technology, but the user experience.
After working under Tremblay for almost a decade, that user-experience vision is the same for DelVecchio and his partners, who include Vice President and Treasurer Brian Scanlon, as well as Scott Seifel, Ben Scoble, and Sean Benoit.
DelVecchio, who advanced from marketing assistant to president and owner, is not alone in his non-technical background. Most of the staff at both IBS and TechCavalry came from myriad backgrounds, which allows them to effectively relate to a wide variety of client businesses.
Having three of the five partners literally rubbing shoulders with customers and clients is one of the benefits of working with IBS and TechCavalry, said DelVecchio, which also quells one of the biggest complaints in the IT service industry — consultant turnover — due in large part to the fact that Seifel, Scoble, and Benoit are active members of the technical service team, and add a sense of stability to both companies.
“It also helps us to recruit and retain non-partners, because those that come in realize that we’re all in this together. If you want to say the inmates now run the asylum, we were once the inmates,” DelVecchio said with a smile.
As they grew IBS, they found that Western Mass. is home to many smaller companies that didn’t necessarily need smarter technology, but they needed things quickly. DelVecchio said businesses have fewer options for those emergency calls because most growing IT firms won’t handle the ‘little guys.’
Enter Jef Sharp and Jeff Hausthor — serial entrepreneurs who had created nine businesses in a little over a decade — who had launched TechCavalry in 2002 out of a small garage in Florence. With their other businesses growing simultaneously, both owners felt that they needed experienced assistance to manage their small firm, and DelVecchio was approached to consider management duties.
Like the cavalry whose presence is announced with brass fanfare, TechCalvary boasts a trumpet logo and the tagline, “PC troubles? Help is on the way!” That focus appealed to the five partners at IBS, who felt that TechCavalry had a solid niche in the personal-consumer market with excellent growth potential, but that both parties would be better served if IBS owned the business.
“One of the biggest values in TechCavalry was their name in marketing,” said DelVecchio.  “Who are you going to call when you need an emergency fixed? You’re going to call in the cavalry.”
In August 2012, IBS acquired TechCavalry and combined the two firms in its Easthampton location. Now, in one expanded headquarters, the company hosts IT user group meetings, lunch-and-learn events, and technology-showcase events, with potential for future expansion on site.

Customer Centric
It was just three years ago that the IBS team decided to segue away from Tremblay’s software-development focus and center on providing IT services and consulting through PC sales, data analysis, networking, hardware and software support, repair, and maintenance.
With the new Windows 8, iPhone OS5, and a thousand other bells and whistles that keep business owners wondering if and how they should invest in technology, IBS and TechCavalry help customers figure out the best fit for their business needs.
“A lot of companies put out a lot of technology because they’re trying to make a buck,” DelVecchio said. “What we do is determine which technologies might be relevant for our clients.”
Cost isn’t always the main factor, he added, noting that his firm has talked clients out of overly complex and expensive solutions as often as it has guided them away from inadequate ones.
The clients that understand the role of technology in business, he said, are the ones that yield the most positive outcome. As a real-world example, he cited a potential new client whose major grievance was the collective 90 minutes of productivity he was losing each day being interrupted by employee complaints regarding their own loss of time due to slow or inefficient technology.
“For him, it wasn’t about technology, and it wasn’t about shaving pennies; it was specifically about how we as a company could add value to their business by helping the owner regain that five to eight hours a week worrying about technology and focus on running the business,” DelVecchio said.  “Having a business owner who is an actively engaged participant — and wants the right technology and dollars to be spent in the right places — makes the engagement much easier, and they get real value out of their investment.”

Emerging Field
Where technology is going to lead the business world in the next 10 years isn’t fully defined, said DelVecchio. The challenge for business owners is to not get distracted.
“There is never a panacea that is your solution to every problem,” he added. “Ultimately, it’s about using the right technology for the right reasons.”
DelVecchio’s goal for both firms is to grow in organic fashion — slow and steady — to be able to maintain the deep time commitment clients require.
“All the advances of technology have provided new and sometimes far more efficient ways to get access to information,” he said, “and all we’ve been asked to do as a company, from day one, is to help provide that conduit.”

A Time to Be Proactive