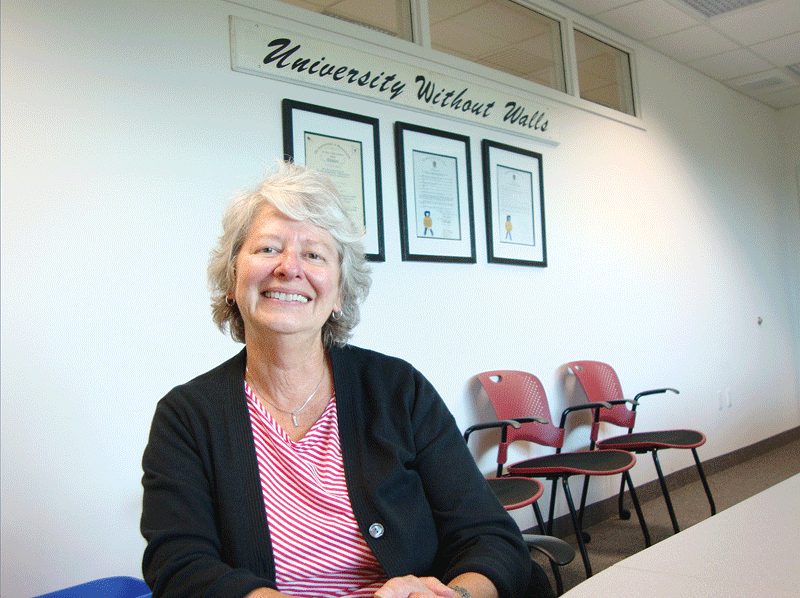 Adult Education Takes a Different Dimension at the University Without Walls 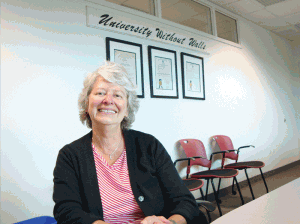 Now celebrating 40 years in operation, the University Without Walls program at UMass Amherst continues a long tradition of empowering non-traditional students to earn that degree they’ve been coveting but unable to complete because life has gotten in the way. UWW, as it’s called, enables people to take their work and life experiences and translate them into college credits. It’s a unique program that has helped script thousands of success stories over the years.

Deb Savola said that, when she entered University Without Walls as a full-time parent, she started off with only 14 credits, and it didn’t seem like she would ever finish her degree.
“I figured I might graduate right around the time I started collecting Social Security,” she joked.
Savola said that, when she graduated from high school “some time ago,” she went straight to college. But working full-time didn’t give her the time to devote to an education. “I always figured that at some point I would kick it back up, but life goes on, and I hadn’t gotten there,” she said.
Her story is one that is entirely familiar to the staff and faculty of UMass Amherst’s division of adult education known as UWW. Started back in 1971, the program began as a means for people with lives on the move — with family constraints and job requirements — to not only have the ability to get their bachelor’s degree without disrupting their non-academic lives, but also to have that work experience transformed into credits toward their degree.
Cindy Suopis is one of the senior faculty members at the UWW, and is also the former director. She explained to BusinessWest what makes this program so much different than any other.
“First off, we are one of the only undergraduate programs to focus on adult students,” she explained, with an age range that spans 20-somethings on up. “The UWW is a degree-completion program, so people who started a bachelor’s degree at some time, at some place, be it at an associate college or at a school where they never finished, can pick up where they left off.”
Instead of majors, UWW offers concentrations, which, Supois said, run the gamut from journalism studies to business organizational leadership, “and just about anything in between.”
What makes UWW stand out is the focused one-on-one attention with advisors, so that students can find exactly what it is that they wish to study, and how their educational experience, and their life, can inform the concentration for their degree.
“Unlike a traditional major, saying you need to take this lockstep route,” Suopis explained, “we bring in the student’s experience. And often that’s work or volunteer experience. We are sanctioned by our faculty senate to give credits for that type of learning. It allows students to see a light at the end of the tunnel when they can receive anywhere from one to 30 credits for their experience. That’s pretty significant, and can replace several courses.”
A lot has happened in the four decades of UWW’s existence. But not so much that the core mission of the program has been altered. The biggest change has come in all classes taking place online, and Suopis said this initially caused a stir with some of the earliest supporters and administrators.
Sitting down with BusinessWest at the start of a new school year, Suopis described how the program reaching 40 years old has been able to keep up with both the times and the changing face of adult education.

Moving On … Line
Suopis started her affiliation with UWW as a program manager at MassMutual, bringing the academic classes to that workplace, something that was common in the days before the online classroom.
“That’s what the UWW has always done,” she explained. “We see a need in a specific place, and a capacity to make it sustainable, bringing the classroom to the marketplace.”
But five years ago, she said, the seismic shift of classroom geography began.
More and more classes were being offered online, and even students within the Amherst town limits opted for that format. “There was a time when we would offer a live class and an online class, and we’d sit back and say, ‘which one is going to fill up first?’ — it was always the online one. Even with locals, they would tell us, ‘my life is too busy. I’d like to take a live class, but really, the online format is much better for me,’” she said.
And thus UWW went online, and Suopis said the decision was a sound concept for the students, but also for the business model of the program. “As a result,” she said, “we can serve many more students in a much broader reach. When you’re delivering something live, you have some constraints. You have to have a classroom, you need people. Online, it’s much different. Classes can be bigger.”
But, she stressed, the core mission of providing one-on-one advising for students is one facet that will not change regardless of a student learning in a classroom or a living room.
“There’s a lot of bad press out there about the for-profits of the online education world, but we do not want to be categorized in that manner,” she emphasized. “We had to really think about how we wanted to deliver this type of education, and these types of goals, to students, and hopefully more students than we ever had before, in an online format.
“So we had to learn how to teach online,” she continued, “and we did have to learn how to teach differently. Pedagogically, we made changes, but also emotionally as well. Technologically, we’ve also learned some new skills as faculty members. And the outcome has been tremendous.”
What started out with 30-odd students has grown to approximately 550 students every semester, and in many different concentrations. Business-themed coursework is the most popular these days, she said, with early-childhood education and health and human services as respective second and third.
“Those are our so-called bread-and-butter programs,” said Suopis, “but if you look at our last graduating class, you’ll see any number of other things as well, from journalism arts, criminal science, construction management, and environmental studies.”

Telling Tales out of School
Bruce Michaels was one of those students from MassMutual who felt that finishing his bachelor’s degree wasn’t a practical reality.
After completing an associate’s degree at a community college, he went on to become certified to teach helicopter flight lessons. He entered the corporate world and knew that he wanted to get that bachelor’s, but “something always came up,” he said. “Getting married, or having a big project at work. I just never found the time to finish the degree, or have the consistency to finish.”
He went to an education fair at his workplace and met Suopis, who told him about UWW. He said that from the very first moment he was introduced to the program, he knew it was a home run.
“In my head I was thinking that this was a great opportunity to get credits based on what I did in the past, and get a jump start on my BA,” he said. “Finally, universities are starting to see the value in the workforce, and what they have done, and are giving credit for that. Someone going into college from high school doesn’t have that life resource.”
Savola was another MassMutual employee recommending co-workers to the UWW program at her workplace when Suopis asked her one day, “when are you going to sign up?”
The wife of a college professor, Savola and her husband were home-schooling their children and she told herself that, when her last child went to college, she too would take the steps to finish her degree.
“But I had a conversation with my family,” Savola remembered, “and I thought I’d go through the first semester where you write your portfolio to figure out how many credits you’ll get. I got so into it, and so excited about the opportunities and the many interesting ways to get credit. I saw it as something very doable, and my family was committed to it, knowing how much I’d always wanted to get a degree. So I jumped in and didn’t look back.”
Despite receiving a smaller credit load than she may have hoped for, Savola was undaunted by the prospect of someday graduating. “If I kept looking at that number of credits I needed for graduation,” she said, “I don’t think I could have done it. You don’t climb a mountain by looking at how far you have to go, but by one step at a time.”
Savola said that the possibility of finishing a college degree is a reality that anyone entering UWW can face, and she gives great credit to the faculty and staff there. But, at the end of the day, it is the possibility to realize one’s own personal goals that will carry them to the finish line.
“When I started this program,” Savola said, “my husband was my greatest cheerleader, and he said he was going to help me through it, knowing that I’d wanted it for so long. I was about a year and a half into it when he died of a massive heart attack.
“I was determined to stay in the program no matter how long it took,” she continued. “My dad died a year later, from pancreatic cancer, and I was helping my mom during that time. But I got this degree through the worst five years of my life. And as I look back, I think, where there’s a will there’s a way. We shouldn’t let things in our life discourage us from reaching for our goals.”
At her graduation day at the university football stadium, with thousands of fellow students and alumni, Savola said the enormity of the situation came clear to her. Standing there with her son, himself an alumni of UMass, she said, “It made me realize how much a part of something I was. If I can do it, I think anyone can.”
But she quickly added, it’s not just about finishing, and graduating. “I think if we look at our education as just getting a degree, that’s tunnel vision, and you miss out on the enriching aspects of it.”

The Secret Is Out
With the online class venue the most recognizable new development of UWW, Suopis said that new marketing techniques have been employed over the last few years to cast some light on what she called “one of the best-kept secrets in the Pioneer Valley.”
Successfully doing such outreach, the enrollment numbers are at an all-time high. But managed growth is of paramount importance to a program with such an individualized component.
“We do not want to have hundreds of thousands of students, to be a diploma mill,” she stated emphatically. “Remember, our model is one-on-one advising. If we became formulaic, if all our courses were templates, we wouldn’t be able to carry on that way. That’s not in our history, it’s not what we want to do, and it’s not what we will do.”
Alumni like Michaels and Savola0 have the highest praise for their experience, and strongly encourage anyone who finds themselves without a bachelor’s degree to consider the UWW.
“When I graduated from high school, everyone needed that diploma to move on into the world,” Savola said. “Nowadays, it’s the bachelor’s that is the minimum education required.”
Asked if one could ever be too old to finish their undergraduate career, she laughed and said, “I don’t think that’s an issue at all. When I was in school, one of my classmates told me that his mom was one of the first people in the program, and she did it in her 70s.”