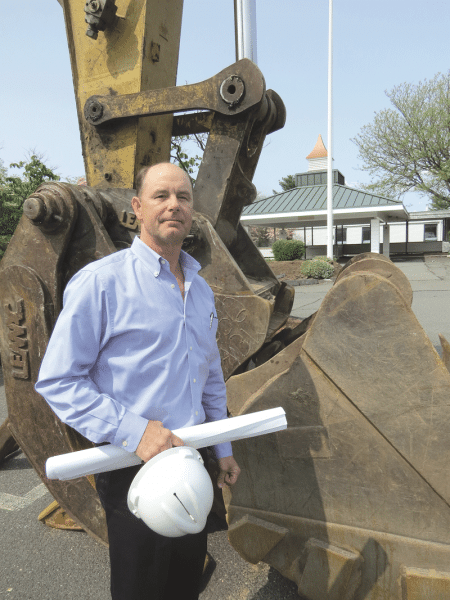 Ken Vincunas stands near the bulldozer that will soon take down the Clarion Hotel & Conference Center, which will become the site of additional office facilities.

Over the years, Agawam-based Development Associates has steadily grown its portfolio to more than 2 million square feet of space under management. Behind those numbers are some intriguing new projects, including additional development just off I-91 in Northampton at the former Clarion Hotel & Conference Center property.

The walls of Ken Vincunas’ office in Agawam Crossing, the property his company built on Silver Street, are covered with photos that he and his daughter have taken in Italy, Spain, and other travel destinations over the past several years.

The front lobby of that space is another matter. The photos there feature landmarks of a different kind, specifically some of the properties Development Associates has built over the years and now manages. There’s one of the Greenfield Corporate Center, for example, as well as 8 Atwood Dr. in Northampton, one of two 40,000-square-foot buildings at that site, known collectively as the Northampton/I-91 Professional Center.

The list of properties, and collection of photos, has grown steadily over the years, said Vincunas, adding that the goal has always been to achieve smart growth when it comes to the portfolio — and thus cover more wall space — through new ventures with sound potential.

And if things go as planned, Development Associates may need to buy some more frames in the months and years to come.

Indeed, the company, which currently has roughly 2.1 million square feet under management in Western Mass. and Connecticut, is mulling additional opportunities at the Atwood Drive complex, if you will, including the former Clarion Hotel & Conference Center, which is set to be demolished.

Permitting has been obtained for 120,000 square feet of new buildings on the north side of the property, across from the two existing 40,000-square-foot structures — 8 and 22 Atwood Dr., respectively, said Vincunas.

But depending on how, and what type, of demand emerges, plans could change, and the site might instead be used for two 60,000-square-foot business facilities.

“We have something permitted, but there is a lot of flexibility with that site, and a number of potential uses,” he said, adding that the picture will likely come into focus over the next several months.

Located just off the junction of Route 291 and the Mass Pike, the former Dow Jones warehouse is now part of the Development Associates portfolio.

Meanwhile, Development Associates recently acquired the 80,000-square-foot former warehouse property operated by Dow Jones on First Avenue in Chicopee. Located just a few hundred yards from where the Mass Pike and Route 291 come together, the site is easily accessible and well-suited for distribution and manufacturing uses, said Vincunas, adding that there has already been significant interest expressed in the site from a variety of potential users. The company also completed a purchase/leaseback of two buildings at Westover owned by Ethos Energy.

For this issue and its focus on commercial real estate, BusinessWest talked with Vincunas about his company and its ongoing efforts to expand its portfolio of properties — and opportunities.

As he talked with BusinessWest at the Clarion site — just a few feet from the then-idle bulldozer poised to start tearing down the long-time Northampton landmark, which was home to the restaurant Page’s Loft and many other names over the years — Vincunas pointed in a few different directions on the parcel as he talked about what could happen there next.

Click HERE for a listing of available commercial properties

He said the property, owned by Atwood Partners, an entity whose partners include members of both the O’Leary and Shumway families (the latter has owned or developed a number of hotels in the Amherst/Northampton area), has a variety of possible uses, and a tentative plan has emerged.

It calls for a smaller hotel, a restaurant, and a four-story, 80,000-square-feet office facility slated to be built on the site of famous (or infamous) domed pool on the Clarion footprint. A sign now appears in front on the property announcing that the space is for lease.

But the hotel market is becoming more crowded, he said, noting a number of recent additions, including a new facility less than a mile away on Conz Street. So a hotel may not be in the cards.

Additional office space — an expansion of the professional center complex — certainly is, though.

The planned 80,000-square-foot structure is being described as ‘professional and medical space’ — there are plenty of both types of businesses at 8 and 22 Atwood Dr. — with spaces from 2,500 square feet all the way up to 70,000 (essentially the entire building) available. It would be built on a parcel that would make it very visible from I-91, and just a few hundred yards from exit 18 off that highway.

“It would be pretty much a landmark right off the highway when it’s done,” Vincunas noted.

But development of such large properties hinges on signing one or more large, or anchor, tenants early enough in the process to justify construction, he noted, adding that the days of spec building are long over in this market. (Clinical & Support Options is an anchor at 8 Atwood Dr., while Cooley Dickinson Hospital is an anchor in both existing structures).

“In order to move forward with a venture of that magnitude, you need to have some pre-leasing on a major scale,” he explained. “And there just aren’t that many of those anchor tenants out there — they’re getting harder to find.”

He is conducting an ongoing hard search at the moment, and already has a few solid leads.

If enough demand materializes, the plans for the site may be altered to feature two 60,000-square-foot buildings, he told BusinessWest, adding that there is ample parking on the site to support such development. 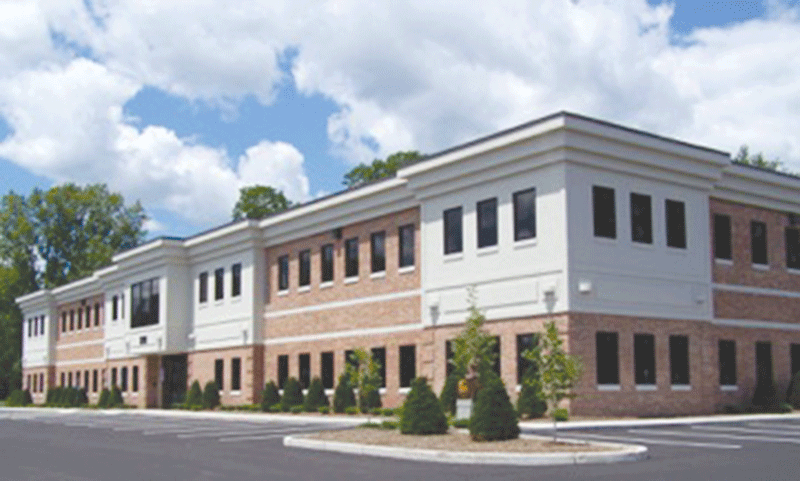 Agawam Crossing, now home to an eclectic mix of businesses, is at full occupancy.

And there are many of them, scattered across Hampden, Hampshire, and Franklin counties and into Northern Conn. The portfolio is diverse, and includes everything from what’s described as ‘industrial/flex/technology space’ in South Deerfield, now available for leasing, to ‘flexible automotive space’ at property on Palomba Drive in Enfield, Conn. — 8,000 square feet of space is available — to the 145,000-square-foot Greenfield Corporate Center, home to a number of businesses and agencies.

One of them is the Greenfield District Court, which is scheduled to relocate soon to new space downtown and become part of ongoing revitalization efforts in that central business district. That will leave Development Associates with a large vacancy to fill; however, Vincunas is confident that, with the momentum now evident in Franklin County’s largest community, the building will gain new tenants.

“This is an excellent office park setting, and we have a great deal of flexibility with the property,” he said, adding that the space is ideal for a call center, medical facility, education, and other uses.

Meanwhile, the Chicopee property represents an intriguing addition to the portfolio, he said, adding that the property has been underutilized, and could be an attractive option for businesses across several sectors of the economy, given its strategic location.

“With such a great location and a good quality building, we could either take on multiple tenants or try to get a single tenant for the whole building,” he noted. “We’re entertaining a number of proposals to try and maximize the use of that building.”

The company has about 2,000 square feet, with a number of private offices, a large business hub, and a sizable front entranceway that has plenty of wall space.

That’s a commodity that will surely be put to use as this company continues to expand its portfolio with new properties that are suitable for a variety of tenants — and for framing as well.

Diversity in the Workplace